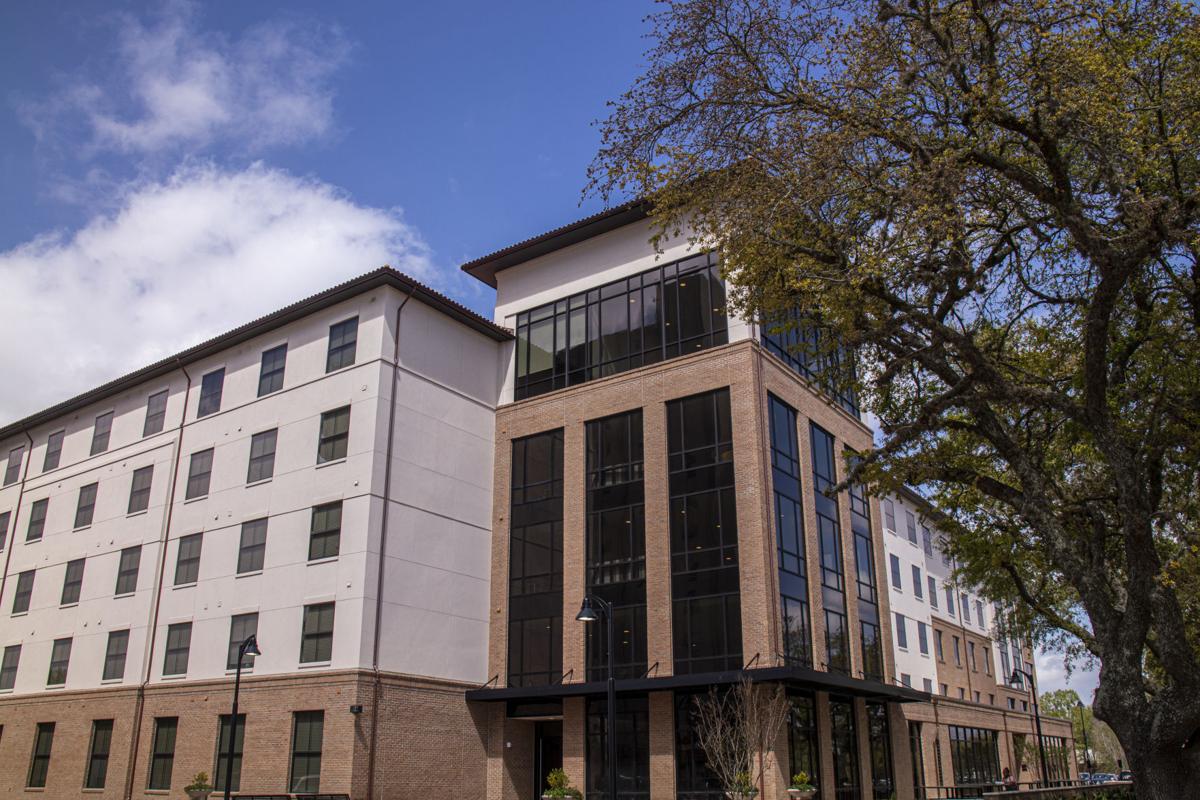 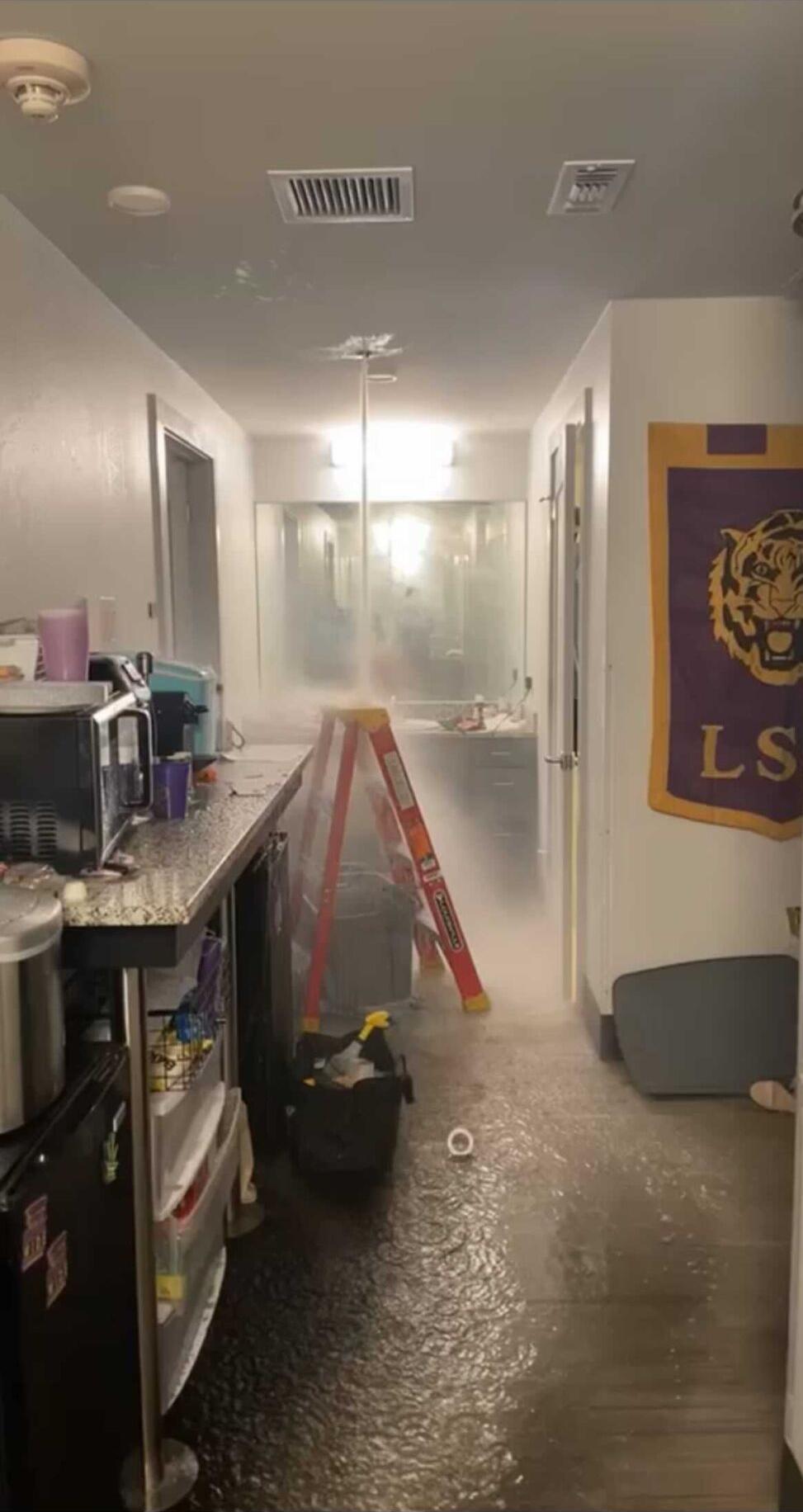 Christin Ransome and her roommates of Cedar Hall thought the flooding of campus roads was the only water-related disaster they had to endure on Wednesday. They were mistaken.

What started as an ordinary Wednesday turned disastrous at about 10 in the morning when black water began shooting out the general business freshman's fifth-floor suite's ceiling after a sprinkler head broke during maintenance.

"I wasn't there but my three roommates and one of our mutual friends were. And then [one of my roommates] called me saying 'Christin. Our dorm just flooded' and I freaked out," Ransome said. "The four of us had no idea whether to laugh at out unfortunate situation or cry."

According to LSU Residential Life, at least four suites, each housing four students in the two-year-old dorm hall, were affected by water entering their rooms.

Res Life Associate Director of Communications and Development Catherine David explained that the damages to the sprinkler system were caused when repairs were being made earlier in the week.

The sprinkler began giving the suite trouble starting on Tuesday around 11 in the morning, Ransome said. So she and her roommates put an empty storage bin under the sprinkler to collect water until a maintenance order could be filled.

"No one came until around 6 pm," Ransome said.

After maintenance worked on the sprinkler for about 30 minutes, Ransome said he returned the following day. She was at her parent's house at the time and drove back to Cedar, only to get out of her car to "hear the fire alarm blaring."

"Our custodial team was on site mopping and mitigating water damage from the beginning of the incident," David said. "Professional water restoration crews [were] also on site to assist and assess damage."

After firefighters arrived at the scene and shut off the water, residents weren't let back into their rooms five hours later. Ransome said they were not let in until "around 2:30 on Wednesday afternoon." "We weren't allowed back into the room for multiple hours, so anxiety was extremely prevalent in our minds. Was our stuff ruined? How bad was the flooding? Will we have to move out?" Ransome said.

When she and her suitemates arrived in Cedar, the water had subsided; there were dehumidifiers throughout the unit. Ransome's roommate and kinesiology freshman Carmen Kellerman was relieved at how much was spared.

"Not a lot was damaged," she said. "We were in our room at the time when the sprinkler went off so we were able to move our rugs and our chairs but the water didn't get high enough to get in any of our drawers. It was enough to cover the floor but not enough to get any of my clothes."

The same could not be said for her suite's common area. Kellerman said their fridge and microwave had to be replaced after the electrical outlets got wet. She is working with Res Life to file claim reports to replace the damaged items.

The damages were not limited to the fifth-floor suite, however. Kellerman said the damage reached as far down as the first floor.

"It leaked through all the ceilings," she said.

Kellerman and Ransome's suite was spared the brunt of the water damage. Unfortunately, other students were not as fortunate.

"On the same day the dorm flooded, after we were allowed back in, I went to the first floor to get some laundry done and I ran into three boys and one of their moms. They were talking about how they were being required to moved out," Ransome said. "I felt extremely guilty."

The students were unavailable for comment, but Kellerman said their ceiling now has water and mold in it, prompting the move-out.

"I heard all their clothes and beds got ruined," she said.

The sprinkler system incident comes just weeks after Cedar Hall experienced issues with its air conditioning that has since been resolved. Ransome said living in a dorm with faulty air conditioning, broken elevators, and now flooding on the fifth floor adds to the stress she already feels as a college freshman.

"I feel like I speak for everyone when I say that we're paying a lot of money to live in one of the nicer dorms, and for things like this to keep happening really puts a damper on the benefits of living on campus," Ransome said. "Here I am, five days later, sitting at my desk in my room listening to the industrial grade humidifier."

Some of its residents feel a two-year-old dorm hall shouldn't have as many severe problems as Cedar experienced over the last two months. Despite the resident assistants and maintenance assisting throughout the process, Kellerman feels the state of the dorm is "a little crazy."

"I have some friends staying in [older dorms like] Miller but they don't have any [of these] problems. So I guess coming in, I assumed since it's a newer dorm that all these problems wouldn't be happening and be fixed," Kellerman said. "It's a little crazy that this has all been happening to us."

Later on Wednesday, due to intense rain from Tropical Depression Nicholas, some areas of campus, especially parking lots, began flooding. Cars were submerged, stalling, and ruined in the South Stadium lots while others attempted to move their vehicles from the flood zones. Traffic on in the inside of campus came nearly to a standstill around 6 p.m. as lots were voluntarily evacuated.

“I don’t even know what to say,” one student, whose car was submerged in the South Stadium parking lot, said. “We should have been warned in some capacity or another.”

Residents of Park Place Apartments reported that the first floor of the building and parking garage flooded. Some students waded and swam through the water, others kayaked to higher ground.

Lockett also experienced minor water damage during the rainfall and several classes were cancelled until the rooms could be dried out with dehumidifiers.