As LSU students return to the campus’ stately oaks and broad magnolias, many remain wary of the threat COVID-19 continues to pose to students, faculty and the community at large.

With the United States’ case numbers above five million and still rapidly increasing, many have debated whether in-person learning should continue, especially on college campuses.

At least three dozen states have already reported COVID-19 cases on their college campuses, according to ABC News. University of North Carolina at Chapel Hill, originally a leader of the college reopening movement, became one of the first flagship universities to return to remote learning last week. After just one week of classes, six COVID-19 clusters were identified and the number of reported positive cases grew from 33 to about 177.

Still, LSU forged ahead with its original reopening plan that includes a combination of about 55% in-person classes and 45% online or hybrid class formats, Director of Media Relations Ernie Ballard said.

The University’s safety plan is detailed in the “Roadmap to Fall 2020,” which contains guidelines that students, faculty and staff are expected to follow. All LSU community members are also encouraged to sign a pledge to continue to follow general health and safety guidelines, including wearing a mask and continuing social distancing measures.

What’s less clear are the specific consequences students and faculty face if they choose not to comply with the University’s guidelines. 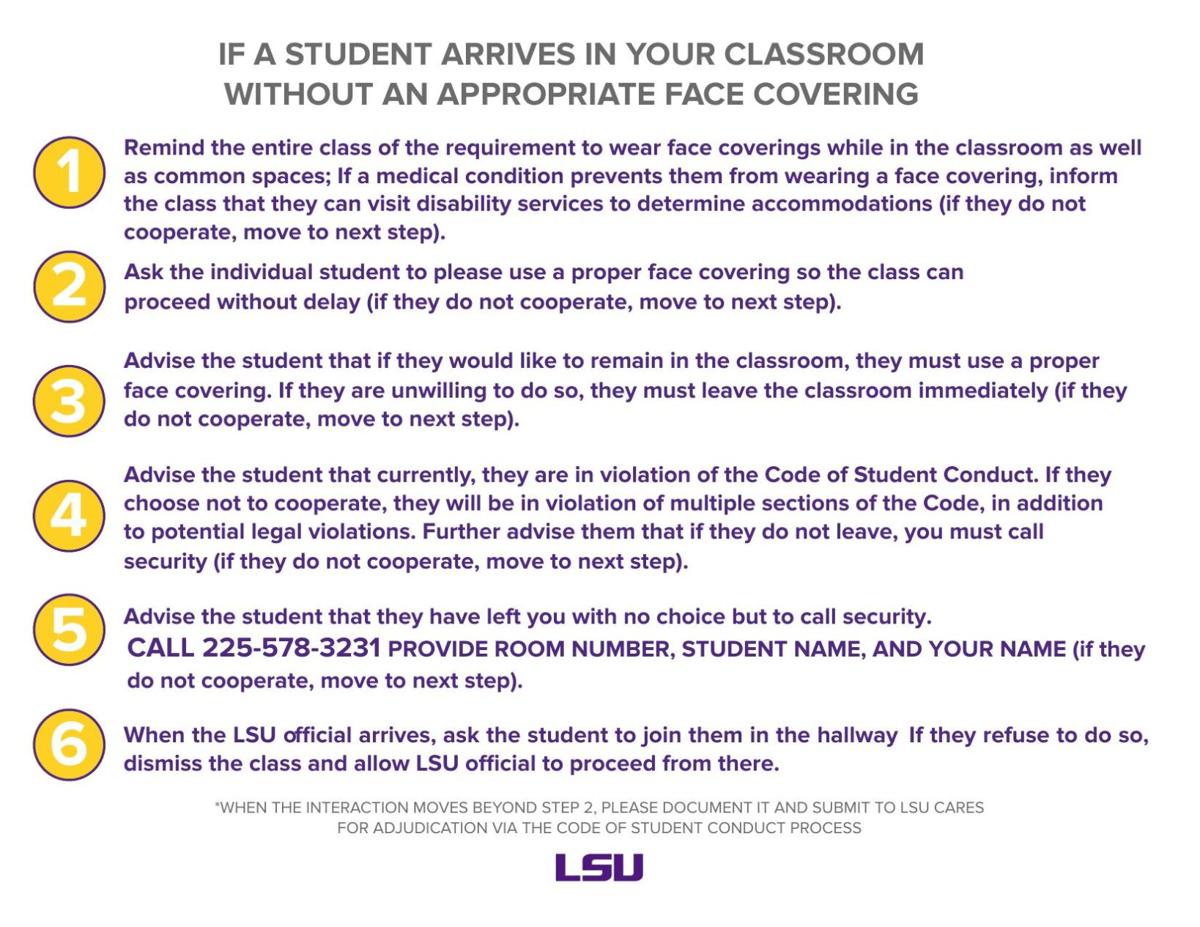 In an Aug. 14 email, Executive Vice President and Provost Stacia Haynie detailed the University’s classroom guidelines for COVID-19 operations to faculty and staff. If a student does not follow the campus-wide face covering mandate, faculty and staff must first remind the class of the mask mandate. If the student still doesn’t cooperate, faculty should ask them to “please use a proper face covering so the class can proceed without delay.” Any students who are still unwilling to comply should then be advised to leave the classroom immediately.

If faced with more uncooperation, faculty members are then prompted to remind the student that they are in violation of the Code of Student Conduct; if those guidelines are not followed, the faculty member will call campus security. If the student still does not cooperate, University officials will be called to diffuse the situation, and the class will be dismissed.

LSU community picks: What do YOU think of LSU reopening?

Whether we like it or not, we are still in the middle of a pandemic. However, schools and co…

Prior to students moving into the dorms, three RAs resigned from their positions in response to Residential Life’s lack of clarity in its housing plan, according to the Advocate. Marketing senior McKay Stevens told the Advocate that Res Life staff would not answer questions the RAs had, such as who would take over the position if an RA contracted the virus.

“The first thing I asked was what do we do with positive tests,” Stevens told the Advocate. “They said, ‘don’t manifest that into this atmosphere.’”

An RA tested positive on Aug. 13 and was relocated off-campus, according to the Advocate. Stevens told the Advocate that RAs had been eating together without masks and some had spent significant time with the RA who contracted the virus. The Advocate reported that the positive case was never addressed by University administrators. Stevens said she did not receive a call for contact tracing, which led to her resignation.

The University staggered on-campus residents’ move-in dates and times over the course of last week. By Sunday, the University reported 33 positive test results, including any cases involving people that were “not on campus at any time in the period they contracted the virus,” according to the University.

With the University's decision to include in-person classes in their reopening plan, almost all students will inevitably be affected by the virus in some shape or form. The virus poses an invisible threat to the LSU community, and each case of COVID-19 presents differently. Here are three student testimonies of their unique experiences after contracting the virus.

Young said she wore a mask and tried to stay socially distant before contracting the virus.

“I was taking it seriously,” Young said. “I wasn’t very afraid of it for me, but I was concerned for some of my family members.”

Young thinks she contracted it from a dinner party at a friend’s house; the host’s family and other guests tested positive a few days after the dinner.

For the first four days, Young said her only symptom was an irritated throat. She didn’t go to the doctor until she started coughing on the fourth day. On the fifth day, the body aches and headaches began.

“That was the worst part of it, and it only lasted for about two days where I felt sluggish and very sore,” Young said.

She lost her senses of taste and smell on the fifth day, which lasted for about a week. Young also experienced congestion and a low-grade fever during the course of her sickness.

“I slept a lot,” Young said. “I couldn’t taste or smell anything, but I ate a lot of soup. I rested a lot and I watched movies.”

Biochemistry sophomore Georgia Guertin tested positive for COVID-19 about two weeks before the fall semester was scheduled to begin. Guertin thinks she contracted the virus when she went on a trip with friends of her family.

Guertin tested positive the day after the beach trip ended; she stayed quarantined in her apartment while battling the symptoms.

“I had bad headaches for the first few days; my body ached. I had stomach aches and a fever for the first three days,” Guertin said. “After that, I was fine. By day five, I had no symptoms.”

Guertin said her headaches would come and go, but they were the worst symptom she experienced during the course of the virus.

“It was up and down,” Guertin said. “I would say the symptoms weren’t even the worst part; it was the quarantine.”

Though the quarantine was difficult, she felt that a lot of good came out of it.

“I got to spend a lot of time in the Word and getting closer to the Lord,” Guertin said. “That companionship with the Lord has been really awesome for me.”

Guertin said students should be aware of the risks surrounding the virus; she encourages them to fully comply with the University’s safety precautions.

“No one wants to be doing this for the rest of our college experience,” Guertin said. “If we can all be personally responsible for our safety and the safety of others, then we can do this right and go back to normal as soon as possible.”

Biochemistry junior Luuanne Nguyen contracted the virus in mid-June. Before she had COVID-19, Nguyen said she took the state-wide mandates very seriously. Her father works for the Louisiana Department of Health, and he informed her family of the risks related to the virus.

Like Guertin, Nguyen tested positive after returning from a trip; everyone who went on the trip tested negative before the trip began.

“[The virus] really did concern me a lot,” Nguyen said. “We took a lot of precautions before going on this trip.”

The night before the trip ended, Nguyen said she was very cold but sweating at the same time. She felt very weak and sick and knew she should get tested when she returned home.

Nguyen said she didn’t cough a lot while she had the virus but had severe migraines and felt very weak.

“The whole two weeks I was in quarantine, I would sleep 16 hours and eat one meal a day,” Nguyen said. “It was hard for me to get out of bed, move around or stay awake.”

Nguyen said she lost her sense of taste and smell during the week she was quarantined. Although her symptoms only lasted about a week, she still hasn’t fully regained those senses.

She said the worst part of her experience was the thought of endangering her family and possibly exposing them. She was especially worried about passing the virus to the older members of her family.

Nguyen and her family were very cautious during the course of her experience with the virus. Her parents dropped meals off at her bedroom door and she stayed quarantined in her room.

“Luckily, no one else in my family contracted it which is a really good thing,” Nguyen said.

Support from her friends and family and knowing that the symptoms would be over soon got her through the roughest moments with COVID-19.

“I think people don’t realize that, although you can get through it, there’s so much that you have to go through while you’re sick,” Nguyen said. “There’s so many people that you’re endangering that it’s not worth whatever party you want to go to or whoever you want to hang out with.”

Nguyen said it’s inevitable for students to come in contact with the virus when classes begin, and she encourages students to continue to take precautions against the spread.

LSU is taking steps to ensure that the class of 2024 has an authentic college experience in spite of the challenges brought on by COVID-19. So…