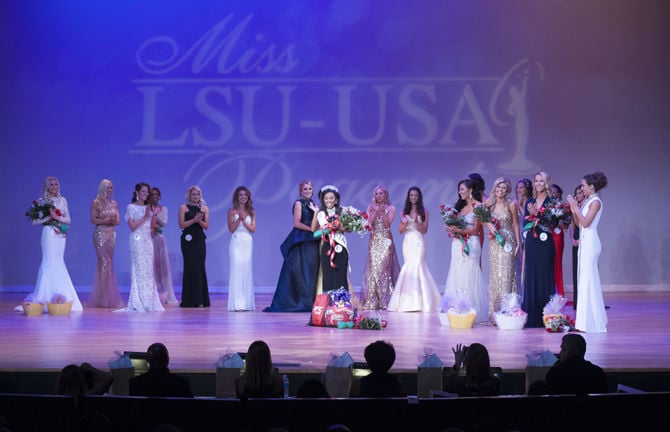 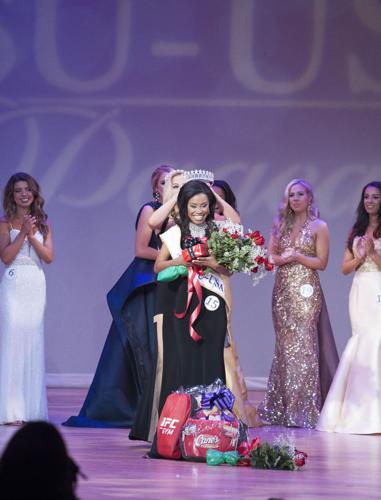 Delta Zeta hosts the pageant every year as a charity event. Philanthropies supported by the chapter include The Emerge Center, St. Lillian Academy and the Alzheimer’s Services of the Capital Area. The pageant has grossed more than $400,000 over the past decade, including $97,000 from the 2016 pageant alone.

The pageant began with an opening statement from emcee Candice Marie Bennett, former NFL cheerleader and Miss Louisiana-USA 2015. The field of contestants was composed of 19 University students of

varying ages and fields of study. After introducing themselves and their interests, they each took turns modeling in swimsuits and evening gowns while Bennett read their respective hobbies and life mottos to the audience.

The judges were five prominent figures in the Baton Rouge and the University communities selected by the pageant committee. One of the judges, LSUsports.net reporter Emily Dixon, had never been a pageant judge before and said she was surprised to learn how much went into the show beyond looks.

“There’s a lot of things these girls do outside in their community and in the interview process that also factors into the winners,” Dixon said. “It’s not just the swimsuit competitions or the evening gowns. It’s the full-rounded young woman. That really opened my eyes to what it’s all about in the pageant.”

In addition to the judges’ scores, the pageant held an online vote in the weeks leading up to the event and took those scores into consideration. Before announcing Miss LSU-USA, the awards for Most Photogenic, Miss Congeniality, Fan Favorite, Best Interview, Best Swimsuit and Best Evening Gown were given out.

After narrowing the field down to five finalists, Bennett announced the runners-up in reverse order with Ceasar being crowned Miss LSU-USA 2017. Ceasar spent nearly half an hour taking pictures with friends and family after receiving her crown and still could barely put into words what the achievement meant to her.

Ceasar, a Lake Charles native, is the recruitment chair of Pi Beta Phi and the assistant director of Organizational Outreach for LSU Student Government. She plans to use her platform to raise awareness of the dangers of drinking and driving after recently losing a friend to an accident. She also plans on advocating for mental health awareness and ending sexual violence on college campuses.