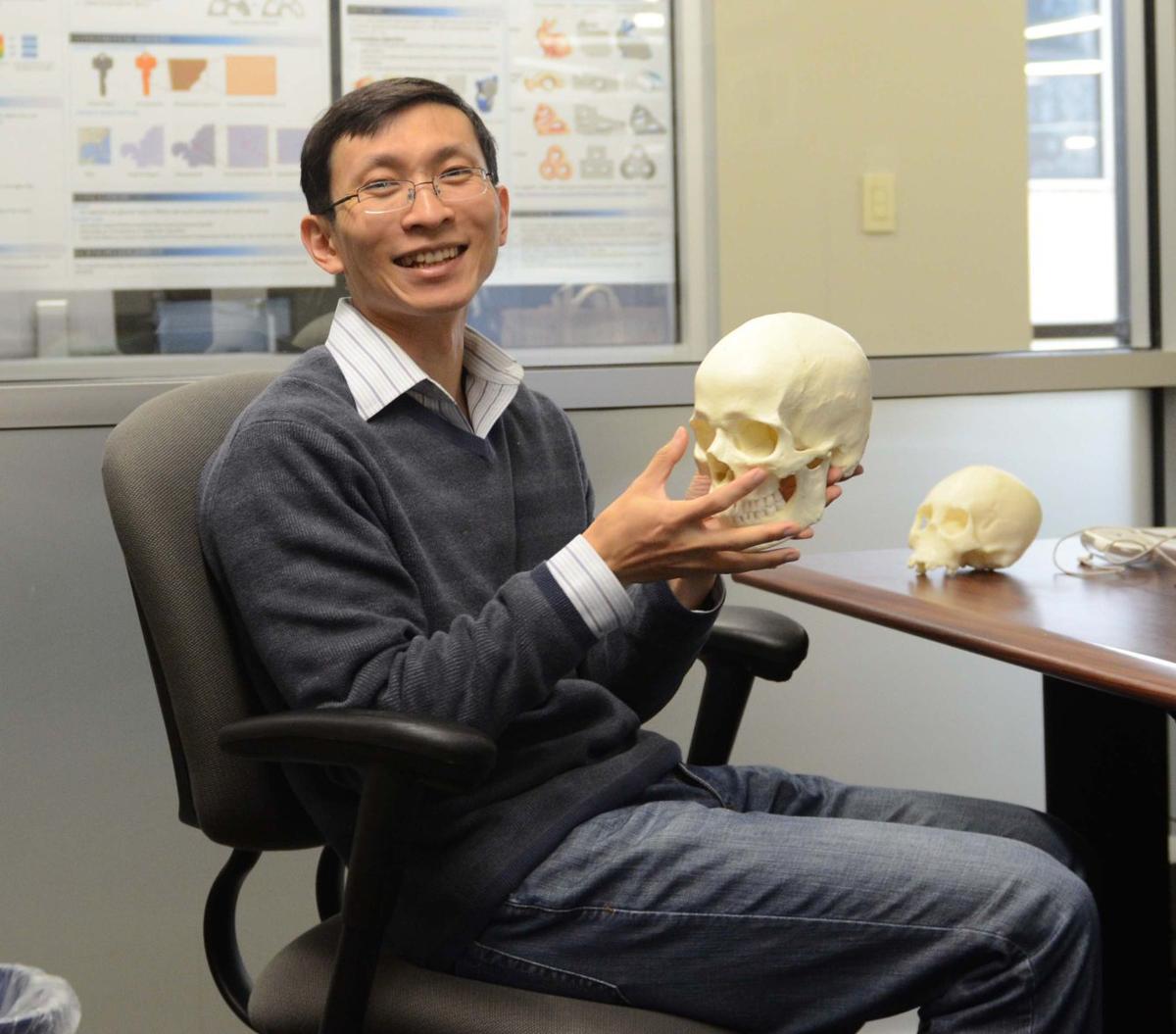 Xin (Shane) Li does research with 3D scanners and 3D printers for skull reconstruction at the Digital Media Center November 17, 2014. 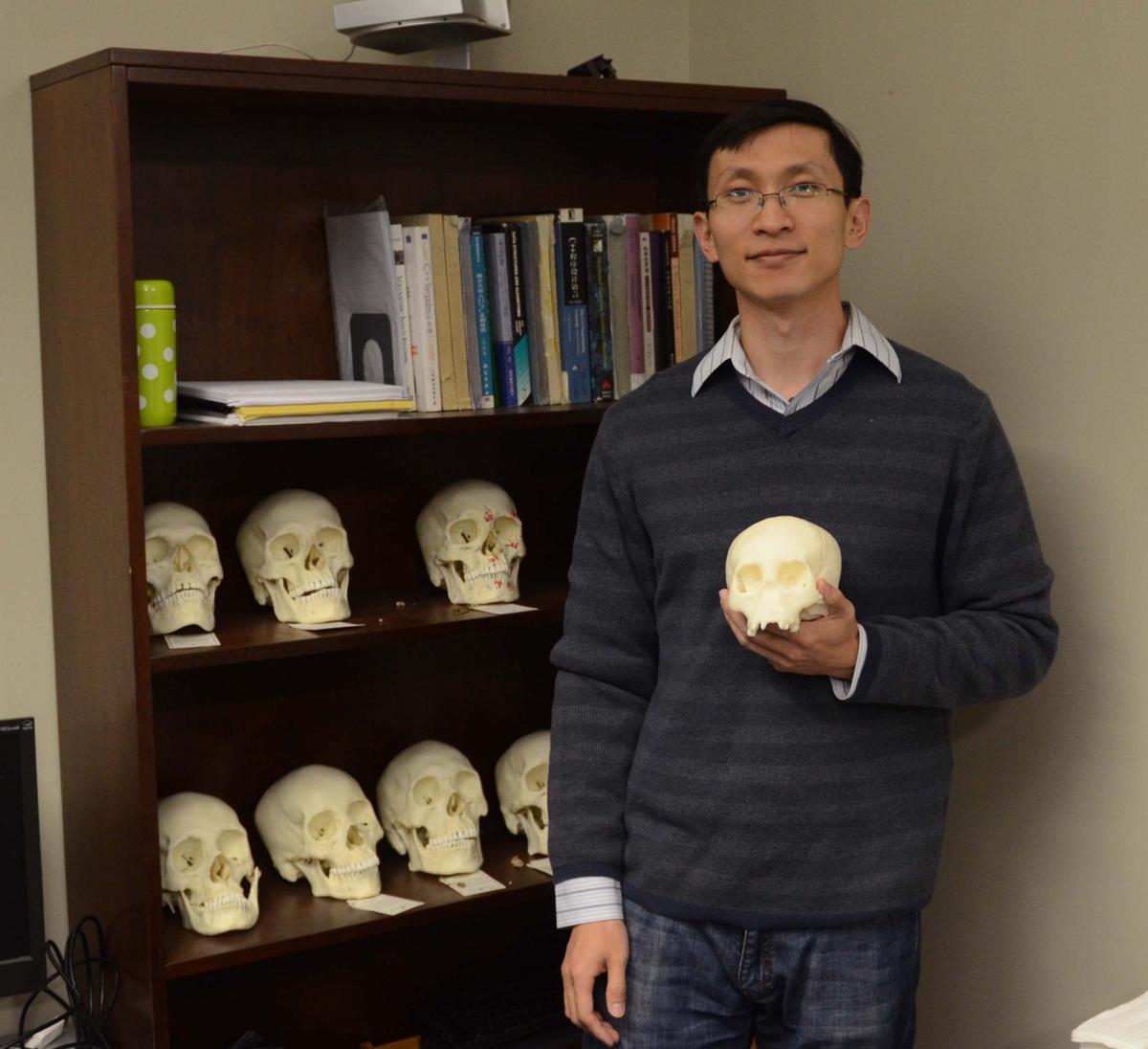 Xin (Shane) Li does research with 3d scanners and 3d printers for skull reconstruction at the Digital Media Center November 17, 2014.

Xin (Shane) Li does research with 3D scanners and 3D printers for skull reconstruction at the Digital Media Center November 17, 2014.

Xin (Shane) Li does research with 3d scanners and 3d printers for skull reconstruction at the Digital Media Center November 17, 2014.

The Louisiana Digital Media Center is tucked in the southeastern corner of campus, far away from the hustle of central campus. But on the inside, there’s a lot more action than you might expect.

Associate professor of engineering Xin “Shane” Li is a computer scientist by trade, but his research projects keep him busy in fields from law enforcement to the medical field and beyond. Li said a lot of what is done in the DMC is multidisciplinary.

One of Li’s projects is Computational Forensics, where he and a team of professors, graduate and undergraduate students from his department and others are working with the Forensic Anthropology and Computer Enhancement Services Lab to restore and analyze skull evidence and reconstruct an unidentified body’s face.

In the past, forensic scientists had to physically piece together a fragmented skull, using clay and gel to fill in missing portions, so a face could be recreated and identified by family.

With Li’s method, all the pieces can be put under a 3-D scanner and an algorithm can compose a digital model.

“We are trying to help them do this in a digital environment and automate this,” Li said.

With the program still in the research stages, Li said the challenge in the computer vision field is that some pieces are too small for the scanner to pick up, but, “[their] algorithm is really at the cutting edge, that can handle small pieces.”

Kang Zhang, a doctoral candidate, has been working with Li on the project for two years.

“It’s a very challenging problem, and I think if I can do some work, I can make a contribution to this area,” Zhang said. “It’s very amazing.”

Another research project ongoing under Li is an attempt to streamline lung cancer radiotherapy.

New technology allows doctors to shape a radiation beam to match a tumor so it will not affect surrounding areas. Yet, with lung cancer, problems remain because lungs are constantly in motion, and it can be hard for doctors to determine the tumor’s shape.

Using the images taken with an MRI or CT scan, Li’s team can build a model to predict a patient’s breathing pattern. Although the pattern will deviate, when it synchronizes with the model, doctors can more accurately determine when to send a radiation beam at the tumor.

What Li refers to as his more fun projects involve the use of the Microsoft Kinect, but they don’t lack practical application.

“I think those are the more fun projects than the theoretical research,” Li said.

In collaboration with Pennington Biomedical Research Center, Li and his team are using 16 Kinect sensors to take accurate body measurements.

Li hopes this project could expand to analyze moving models. With before and after data to reference, it could help determine a physical therapy treatment plan and its effectiveness.

Li is also supervising two undergraduate electrical engineering research teams using Kinects in their attempt to build autonomous robots. These robots will use Kinects to “see” their surroundings and draw accurate maps of the area without a human controlling their movements.

These could be used in tight spaces as well as hazardous environments.

“As you can see, much of the research is multidisciplinary,” Li said.

Except for a few afternoon clouds, mainly sunny. High 81F. Winds ENE at 5 to 10 mph.

Partly to mostly cloudy with scattered showers and thunderstorms later at night. Low 69F. Winds SE at 5 to 10 mph. Chance of rain 40%.

Partly to mostly cloudy skies with scattered thunderstorms before midnight. Low 72F. Winds ESE at 5 to 10 mph. Chance of rain 30%.