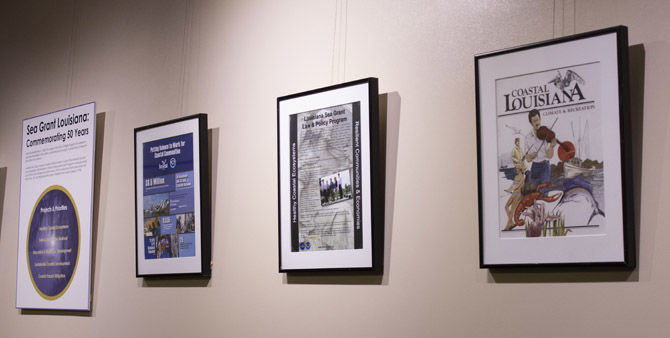 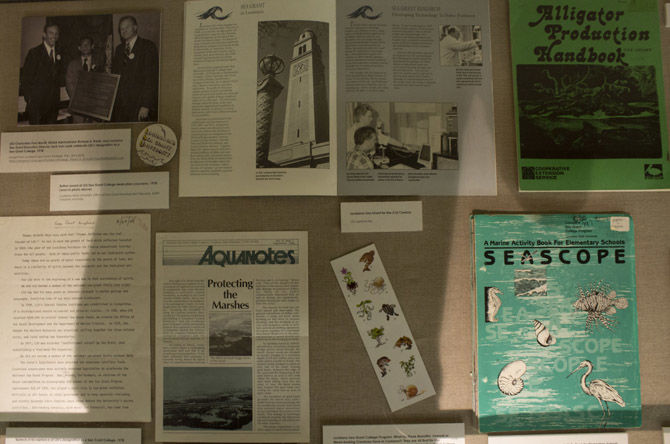 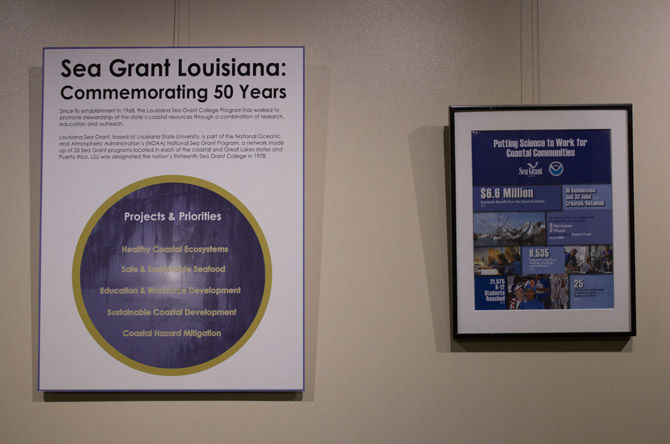 Only 33 universities in the country have the privilege of calling themselves a Sea Grant University, and LSU is one of them.

Sea Grant is a Federal-University partnership program that allows for scientist to make a concentrated and coordinated effort to find solutions to coastal issues across the country. The University was selected as the 13th Sea Grant College of the nation in 1968, marking 2018 as the 50 year anniversary of the base of Louisiana Sea Grant.

Hill Memorial Library is hosting an exhibit titled “Louisiana Sea Grant, 1968-2018” to commemorate the efforts this federal program has made toward solving marine issues across the state. The exhibit shows Lousiana’s coastal history through written and visual pieces from newspapers, magazines and other sources.

The program has had its hand in each of the four issues that it has identified to be especially important in the state of Louisiana: healthy ecosystems and habitats, resilient communities and economics, sustainable fisheries and aquaculture and education and workforce development. It strives to address coastal and marine issues that affect the day to day life of people all across the state.

From the crawfish you eat to the coastal hazards faced every year, Louisiana Sea Grant has had its place in ensuring the safety of Louisiana citizens while also working alongside students at the University on research projects. Director of Outreach and Communication Roy Kron described the relationship between university researchers and as a symbiotic one.

“As long as the research has some relationship to coastal issues, we’re willing to look at it and fund it,” Kron said. “We have an extension program where we cooperate with the LSU Ag Center. We have county agents and they work with fishermen and folks in the fishing industry in helping get information to them and for them to get information back to the main offices to know what kind of coastal issues we’re facing ... and to find and fund appropriate projects.”

2018 marks 50 years since the University was announced as a Sea Grant University. The exhibit at Hill Memorial Library shows just a small snippet of what the projects and programs have done in the recent years to better the state of Louisiana and its wetlands.

Leah Wood Jewett, the exhibit coordinator for special exhibits, said it’s hard to define everything Louisiana Sea Grant does, but the program focuses on issues detrimental to the Louisianians that inhabit the coastal wetlands.

ranging from kindergarten to eighth grade. To help educate these students, they focus on coastal issues and the little things they can do to help everyday. A few of their annual programs include Coastal Roots, Marsh Maneuvers and Ocean Commotion hosted in the PMAC.

“Later this month, we are hosting Ocean Commotion at LSU,” Kron said. “We’ve hosted that there for 20 years now and this will be our 21st year where we’ll have 2000 k-8th graders come to the PMAC. We organize around 60 exhibitors and it’s all coastal related content. It’s kind of like a big science fair.”

Louisiana Sea Grant has had a base at the University for 50 years now and has worked with the students to make a difference through funded research projects and internship programs. Louisiana Sea Grant provides research and projects that can benefit the entire community.

“It’s important to see what is being done for me as a citizen and where my tax dollar is going.” Jewett said. “I think most people would be surprised about the broad number of projects that are being funded and the positive change that Louisiana Sea Grant is making.”