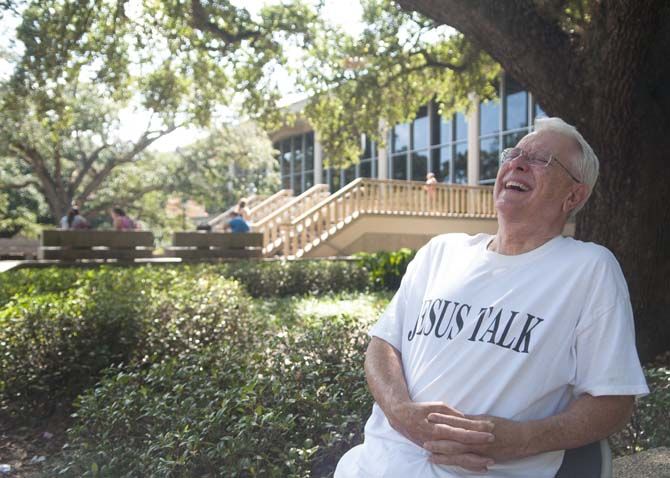 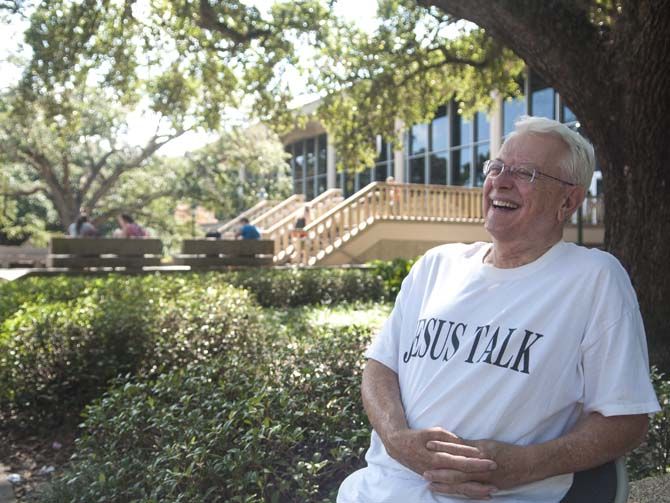 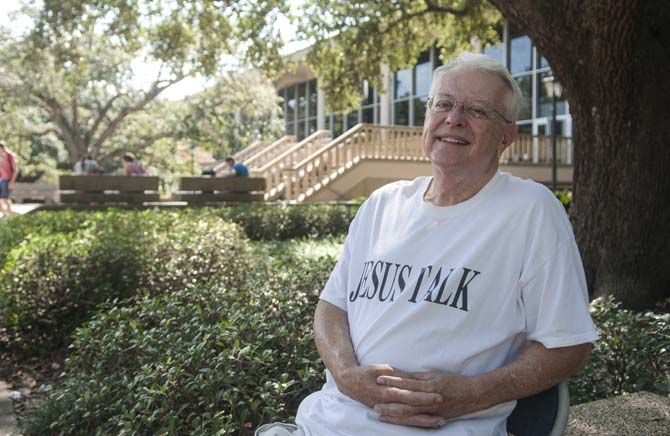 Following the sale of his engineering company nearly 10 years ago, Ivan Imes gave his remaining years to the Lord’s work — enjoying the perks of retirement from a metal fold-out chair outside the LSU Student Union.

The start of the 2015-2016 school year marks Imes’ 10th year in Free Speech Plaza as the man referred to as the “Jesus Talks guy.”

Imes said he set out to make a difference and thought LSU’s 30,000-member community was a good place to start.

“When I had kids, I raised three boys without the Lord,” Imes said. “That’s why I’m here — because I saw what I didn’t do and was grieved about it.”

From a baptism behind the Chimes to a young woman’s struggle with drug addiction, Imes said he has seen it all in his decade on campus.

Toward the end of Imes’ third semester outside the Union, he agreed to be interviewed for an elementary education student’s English paper.

After learning about the interviewer’s cocaine addiction and resentment toward Christianity, Imes said he left her with the religious, inspirational book “Bondage Breaker” after they parted ways following the interview.

He said the book moved the student to kick her drug habit and convert to Christianity. She even began working as a counselor at a drug rehab center in Alexandria, Louisiana.

“I won’t give away her name, but it started with a ‘K,’ and K was the happiest, bubbliest person ever,” Imes said. “Almost without exception, every time she would come by I would see the big smile.”

The majority of K’s classes were on the other side of campus, but she seemed to stop by whenever Imes was with a student who needed his counsel most, he said.

“I saw God working,” Imes said. “God would send her across campus on some unknown mission. The mission, unbeknownst to her, was to help somebody fighting addiction.”

Before he came to LSU, Imes’ wife warned him Christian counsel might not be welcome in Free Speech Plaza. She told him the students would “eat him alive,” and offered to drive him to the hospital if he was ever injured on the job.

Imes said students have yet to harass him, but faculty members are not always receptive to his message.

“I’ve had some strange looks,” Imes said. “I’ve had two professors that essentially cursed me. You know anything that smells like God, they obviously just hate it.”

But the group Imes said he’s had the most trouble with is an organization from Mississippi called Consuming Fire.

“The little 4-year-old son of the pastor, first time he ever saw me, came up to me pointed his finger right in my face and said, ‘You’re going to hell,’” Imes said. “And I said, ‘Well, thank you son. I hope you don’t join me.’”

When Imes first arrived on campus, the group made trips to Free Speech Plaza three or four times a month, but now he sees them only two or three times a semester.

He said he would advise students frustrated with Consuming Fire’s preachings to “give the church a break.”

Mostly cloudy in the evening then periods of showers after midnight. Low 72F. Winds light and variable. Chance of rain 40%.