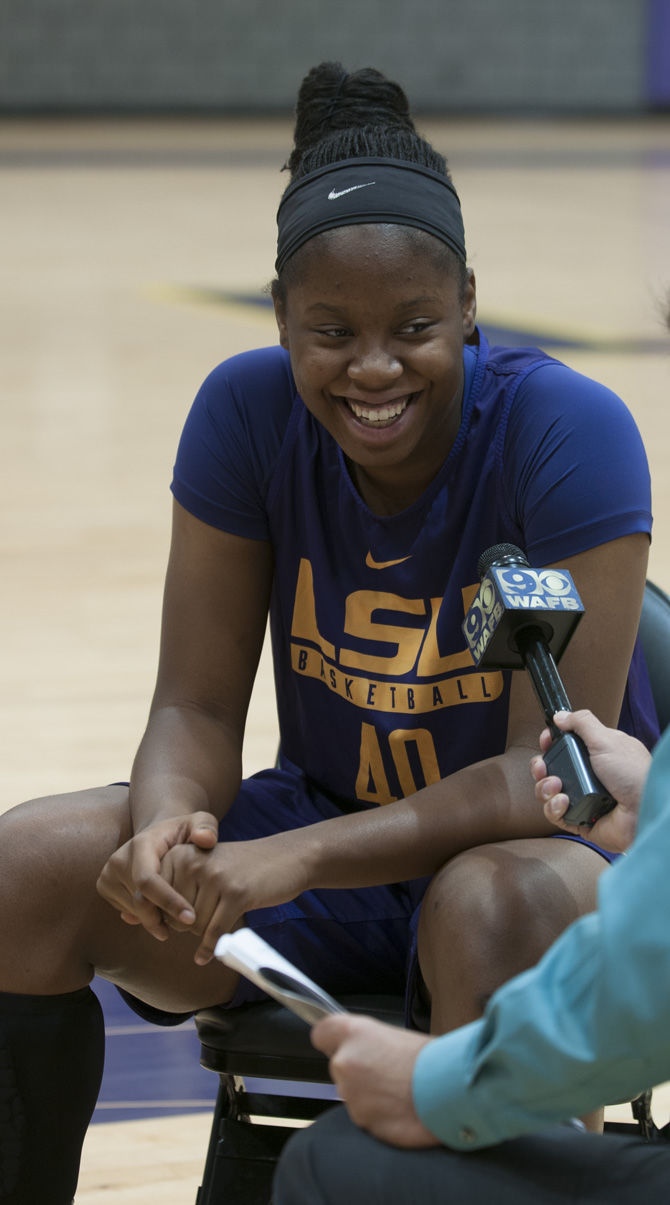 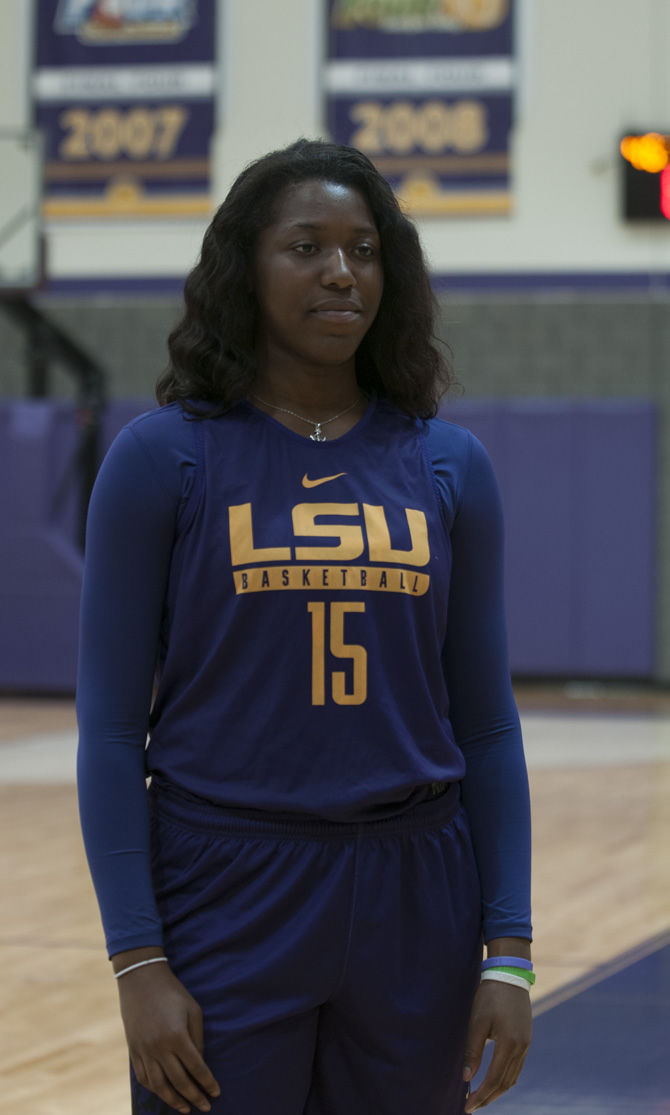 LSU freshman center Yasmine Bidikuindila (15) prepares to speak with a reporter on October 12, 2016 in the University Basketball Practice Facility.

LSU freshman center Yasmine Bidikuindila (15) prepares to speak with a reporter on October 12, 2016 in the University Basketball Practice Facility.

Freshman Faustine Aifuwa didn’t expect “Bidikuisine” when she committed to the LSU women’s basketball program over the summer.

The Georgia native, a center on the Lady Tigers’ squad, is well-fed by her roommate and teammate, freshman center Yasmine Bidikuindila, who coined the phrase based on her last name.

Aifuwa said the two can usually be found jamming to their favorite music and eating when they have free time off the court.

“It’s always fun to have [the team] taste my food,” Bidikuindila said. “We spend a lot of time together, too. In the living room, we watch TV shows. It’s fun.”

Bidikuindila said her favorite dish to make is shrimp tacos, as well as dishes with rice. Aifuwa had a hard time deciding her favorite meal from Bidikuindila, but ultimately disagreed with her teammate’s choice.

“My favorite cuisine that she made was the honey barbecue nuggets,” the 6-foot-5 center said. “It wasn’t just that — she had the nuggets, she had the dirty rice. It was a whole platter. She had mac and cheese, too, and it was bomb.”

Bidikuindila added she doesn’t have much time to cook now with the team’s busy schedule, but it is still one of her favorite pastimes. She said she is used to cooking for a lot of people because she has eight siblings.

Aifuwa said the first time the two communicated was through social media to discuss their travel arrangements. From then on, they clicked.

Their skills aren’t just in the kitchen. The two bring heat to the basketball court, as well.

They might play the same position — center — but it is not competition. Instead, it is a learning experience, Aifuwa said.

“We push each other,” she said. “We both are working, and if that means to get in each other’s faces to do that, we’re going to do that. When we do that, we don’t take it personal.”

Before coming to LSU, Bidikuindila hadn’t played in roughly two years because of a knee injury that required surgery. With her teammate beside her, she said Aifuwa helps her get back in shape.

“Going against Faust — she’s 6’5” and I’m 6’6” — it’s different than high school, [when] you’re going against shorter kids,” Bidikuindila said. “We push each other and it’s great competition preparing us for the season.”

Coming from big families allows for their communication to flourish both off and on the court because both always had to communicate with their siblings. The pair agreed being far away from their families isn’t so bad with a “sister” nearby.

“It’s comforting because if something goes on with your family, you can always go to them,” Aifuwa said. “It’s not like you have to keep it to yourself. In a way, you’ve got a sister with you.”

Bidikuindila said the age difference helps her communicate with Aifuwa and the rest of her teammates, too.

“It better helps me with helping them through anything they need and making sure they’re doing what they are supposed to do in the morning — like, ‘Faustine, did you eat?’ Just like a big sister and just being there for them,” Bidikuindila said.

LSU coach Nikki Fargas said you can usually find Aifuwa dancing and being social in the middle of a crowd, while Bidikuindila can be found people-watching.

“They’re two very recognizable people when you’re walking down the street,” Fargas joked. “You’re not going to miss them, but they also have huge personalities.”

Scattered thunderstorms during the evening, then becoming clear overnight. Potential for severe thunderstorms. Low 59F. Winds WSW at 10 to 15 mph. Chance of rain 50%.