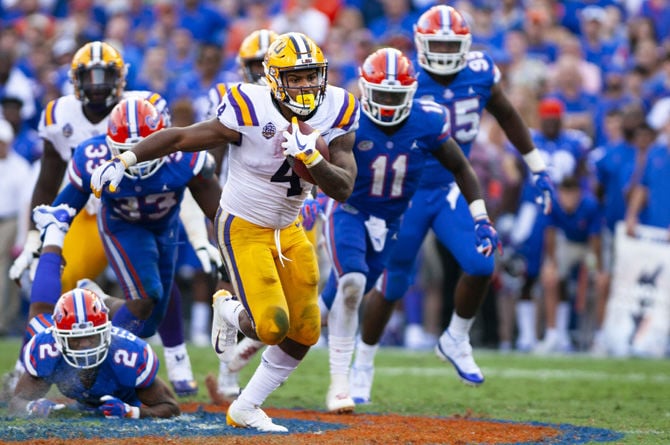 LSU senior running back Nick Brossette (4) runs to the end zone during the Tigers’ 27-19 loss against the University of Florida on Saturday, Sept. 2018 in Ben Hill Griffin Stadium. 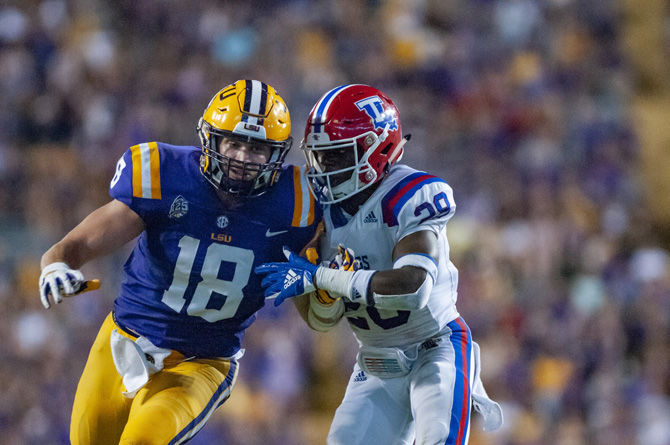 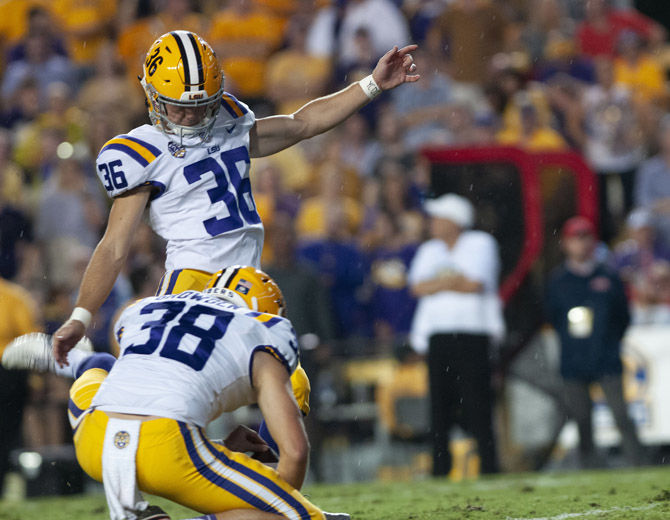 LSU senior running back Nick Brossette (4) runs to the end zone during the Tigers’ 27-19 loss against the University of Florida on Saturday, Sept. 2018 in Ben Hill Griffin Stadium.

When LSU gets off the team bus at the top of the hill on Saturday to face visiting Rice, for 18 seniors it will be for the final time.

They all come from different places and backgrounds, but for three seniors, the memories they made in Death Valley will always be cherished.

Tight end Foster Moreau wasn't even sure the opportunity to play for the team he grew up watching would ever come. His senior year of high school, Moreau was on a family vacation when he got a phone call from then head coach Les Miles, who offered Moreau a scholarship on signing day to play for the purple and gold.

Four years later, Moreau was honored with the prestigious No. 18 jersey for his senior year, accumulating 41 catches for 483 yards and four touchdowns. For Moreau, getting to represent and play for his family is what excites him, but he knows the team still has a job to do on the field.

"It's really cool to go out there and dedicate a game to representing my family," Moreau said. "The people that have gotten me so far in life and put me in this incredible situation that I'm in. It's honorable and respectful and I'm really looking forward to it."

Running back Nick Brossette had to wait his turn. For three years, Brossette backed up the likes of Leonard Fourette and Derrius Guice. A former four-star recruit out of University High, Brossette saw limited action his first three seasons, with a total 46 carries for 306 yards and no touchdowns.

As a senior, Brossette leads the team in rushing yards and touchdowns with 792 yards and 11 touchdowns, and with two good games left in the regular season, could get to 1,000 yards for the season. Coach Ed Orgeron said he knows Brossette is close and will do everything he can to try to get Brossette to that 1,000-yard mark.

"Coming into the season, we had those questions at running back — there's no questions any more," Orgeron said. "I don't know how many [yards] shy he is, but whatever it is, I want him to get it [and] give him a chance to get it. He's very deserving."

Brossette said he's been thinking about this moment for the last couple of weeks and wants it to be a 'special' night for him, his teammates and the fans.

"It's crazy to think this is my last game at Tiger Stadium," Brossette said. "My dream came true, becoming the starting running back for LSU, and I'm enjoying every minute of it, playing for my teammates and having fun."

Kicker Cole Tracy has only been on campus since June but has had a historic season for the Tigers.  The fifth year senior is 22-of-25 on field goals and has made all 27 of his extra point attempts this season.

At Assumption Community College, where Tracy played the first four years of college ball, he was 81 percent on field goals.  Tracy's name has kind of become folklore around Baton Rouge as fans of LSU this season have donated a total of $16,000 to the athletic program at Assumption College.

Tracy said even though he hasn't been on campus all that long, he has enjoyed every moment of being at LSU and looks forward to running out of the locker room for the final time.

"The team has really embraced me like I've been here for five years, which has made the transition so much easier," Tracy said. "This week will be interesting because it's a reflection on my career as well as my time here. I'll just try to soak it all in like I've been doing."

Showers and thundershowers in the evening, then cloudy with rain likely overnight. Low 46F. WSW winds shifting to N at 10 to 15 mph. Chance of rain 70%.