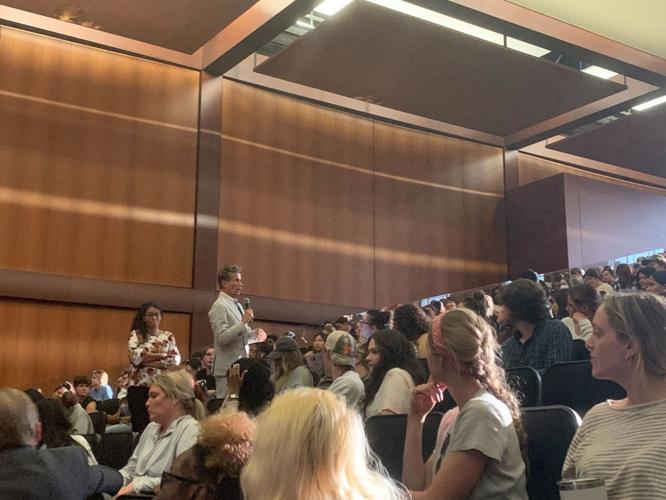 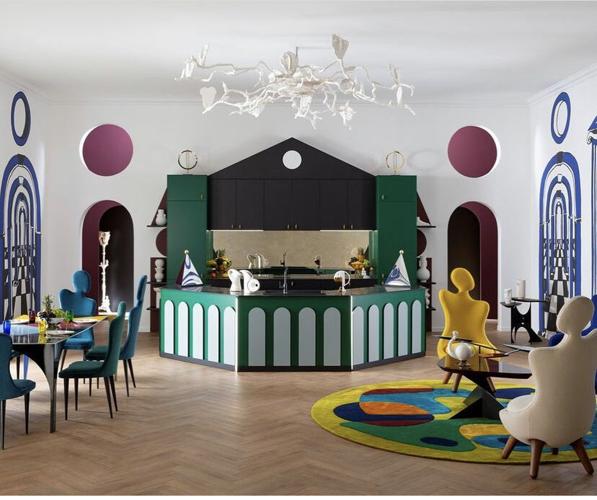 Renowned French celebrity and artist Vincent Darré visited LSU as one of the most distinguished international guests the university has ever had. While in Baton Rouge, Darré gave a presentation in the Cox Auditorium on April 3 and at the LSU Museum of Art the next day. His visit to Louisiana also included Lafayette and New Orleans.

Accompanying him is the esteemed Catherine Baba, a fashion designer originally from Australia who is now, like Darré, an elevated, stylistic personality in the Paris art scene.

To call Darré merely an artist would be a disservice to his long and accomplished resume. Darré is a fashion designer turned interior designer best known for his surrealist interiors, though he has dabbled with most contemporary art forms. He aims to create a sense of humor with grandeur, professionalism with abstraction and a challenging style to describe, yet surprisingly easy to receive mentally.

Director of the School of Art Rod Parker described the style as “a mixture of Rococo and Edward Gorey.”

“He’s sort of one of those people who’s always making work and tossing it off," Parker said. "People run behind trying to catch it, to keep up with it. This is a glorious moment. None of us are going to meet too many people like this in the course of our lives.”

According to art history professor Darius Spieth, it was his misdeed that brought Darré to Louisiana. Spieth was one of the leading voices that resulted in Darré’s visit to LSU.

Spieth, in partnership with the School of Interior Design, School of Art, the honors college, the history department, the Center for Collaborative Knowledge and the LSU Museum of Art, hopes that students can appreciate the gesture of Darré and Baba’s visit.

Darré’s artistic influences can be traced to his intellectual family. His father was a communist sociologist, his mother a feminist and his uncle, Jorge Semprún, a notable writer. This, combined with his youthful exposure to Italian baroque architecture, led to an admiration that is visible in his style today.

“The drawing on which the interiors and furniture is based, it is very colorful, it is joyful," Spieth said. "It is very rich in historical references to classical modern art. To some extent, it’s a celebration of life and the imagination."

Darré studied for years at Studio Berçot, the place where he became acquainted with Baba, and frequently attended the Palace nightclub. The Palace, according to Darré, was Paris' version of New York’s Club 54. He made connections pivotal to his early fashion design career and mingled with its elite.

These connections propelled him to work with labels such as Prada, Fendi and Moschino. Around this time, Darré became the personal assistant to Karl Lagerfeld. Working with esteemed labels and exposure to Lagerfeld would impact his direction and outlook on life.

However, Darré had a falling out with Moschino that would shift the direction of his career. He began to favor interior designs and furniture.

By then, Darré mainly operated independently and had begun constructing a portfolio of collections for his label, Maison Darré.

The first collection, called Ossobucco, was stylized like bones, vertebrae and other skeletal features.

His latest edition, the Insomniac Collection, had dreams in mind. This collection is the epitome of what Darré has become critically known for—surrealist interiors.

“It’s easy when you love your work," Darré said. "It’s easy to speak about it. When you have an idea you can realize this, it is not only a dream, it is possible.”

Throughout his bouts with fashion and interior design, Darré maintained a small career in cinema. As one of his favorite mediums, he has played small roles and served as an art director and costume designer throughout his career.

Darré received LSU well upon his arrival. He said it was “totally different” from the French universities he was accustomed to.

“It is a different mentality and students are very lucky to have this chance to live in this place,” Darré said.

The display Darré gave on Monday, April 4, was the longest and most populated presentation he had ever conducted in English.

However, his eccentric, sometimes sarcastic personality transcended the language barrier.

Following the recollection of his life story and the inspirations for his career as an artist, Darré opened up to questions from the audience and provided advice to students.

Darré emphasized the importance of being open to opportunities to them.

“I’ve been so lucky because I have so many different friends: writer, actor, musician fashion designer," Darré said. "Sometimes, people propose to me strange things: art director for a magazine or to do costumes. I’m open for every opportunity.”

As the presentation closed, an audience member asked if they could expect any tiger-themed art pieces in the near future. Darré shrugged and smiled in response.

Partly to mostly cloudy with scattered showers and thunderstorms later at night. Low 73F. Winds SSE at 10 to 15 mph. Chance of rain 40%.