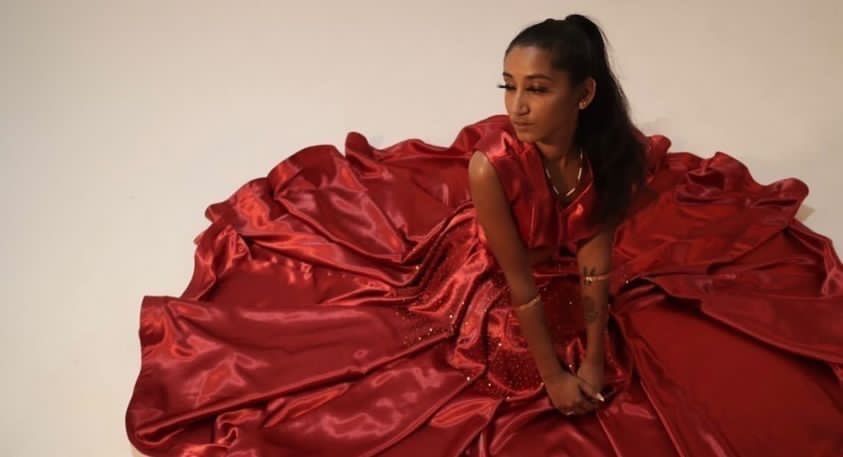 A model wears a red dress designed by Kaleb Duncan for an independent video shoot. 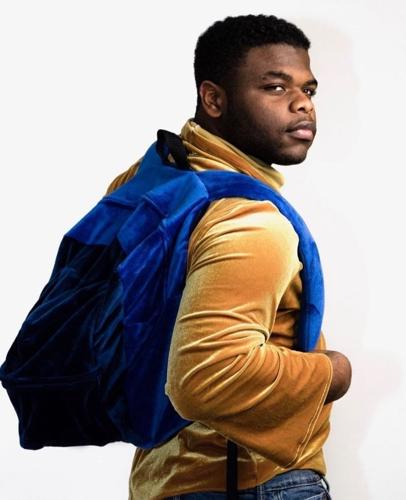 Kaleb Duncan poses with a sweater and backpack he designed. 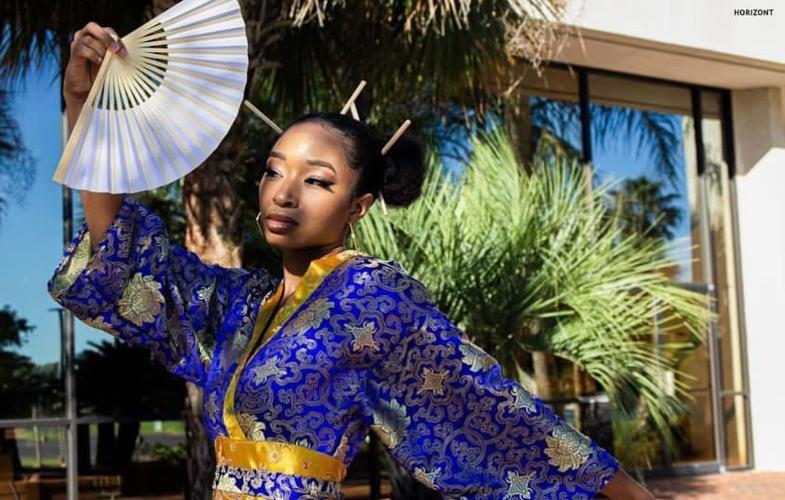 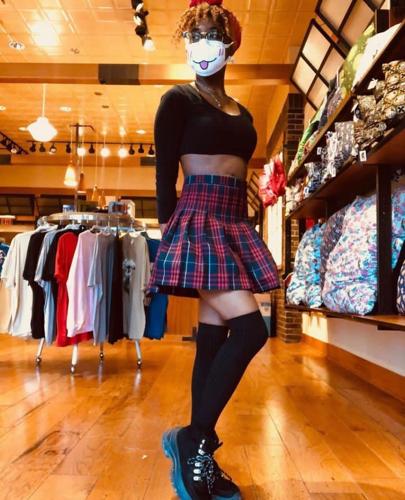 A model wears a red dress designed by Kaleb Duncan for an independent video shoot.

Apparel Design senior Kaleb Duncan is known by Kei Ai in the fashion community. His alias, which comes from the phonetic spelling of his first and middle initials, “serves as a fragmentation” of himself as a designer.

LSU students may know him as the cheerful and joking cashier in the On-The Geaux store in the Student Union, where he works full time.

Duncan took a break from school to focus on his craft, and uses his job at the Student Union to support his fashion endeavors. He plans to go back to school in the Fall of 2023.

“I had a lot going on and I wanted to focus on me being a designer, so I pulled back from LSU to recenter myself,” Duncan said.

Duncan’s interest in fashion started in 2016, during his junior year of high school. While in an advanced IB art class, he started experimenting with clothing and learned how to work a sewing machine. He continued to self-teach himself through trial and error.

“Once I chose [fashion design] there was no turning back … It’s a medium I can use to express myself, feelings, stories,” Duncan said. “Fashion is a language, and clothes are the way you communicate.”

When he first came to LSU, Duncan planned to study electrical engineering. He switched to fashion because he felt more comfortable with it, and saw aspects of engineering in fashion design.

“Fashion is just engineering with fabric. [Designer Issey Miyake] went to school for architecture, and he uses his architecture and shows it in his work, and I feel that we are similar in that aspect,” Duncan said. “It’s blending two supposedly opposite fields into one beautiful product.”

Duncan now designs everything from womenswear to menswear, and is currently working on outfits for an upcoming wedding. He wants to start marketing his clothing toward college-age people who are discovering themselves.

Duncan’s brand, Dragonflies Purple, or DFP, is a reflection of his goals in life.

“My favorite insect is a dragonfly because of its symbolism – they represent going through life once and with no regrets. They’re also an animal of hope, perseverance and luck. And the color purple represents mystique, so all together it represents the royal mystery of discovering yourself and being able to adapt to any situation you go through,” Duncan said.

In 2019, Duncan began doing fashion shows around Louisiana, with appearances in Baton Rouge, Lafayette, New Orleans and Shreveport. His first out-of-state show was in September 2021, where he was featured in an indie fashion week in New York City.

“[The New York show] really changed my whole perspective on the direction I was heading towards,” Duncan said.

The theme for Duncan’s New York collection was “When Cultures Collide,” where he merged aspects of Asian culture with aspects of Black culture. While his outfits were on display, anime intro music played, intermixed with Black animation intro music.

“One of the biggest influences in my life is culture … I have multiple sources [of inspiration] I draw from, whether it’s music, anime, people I talk to, experiences or my interpretation of something,” Duncan said.

Being a student at LSU has really helped him in the fashion industry, Duncan says, noting that the person who introduced him to fashion shows was a fellow LSU student.

“If I didn’t go to LSU, I wouldn’t have met a bunch of people that introduced me to fashion,” Duncan said.

Duncan has big plans for the future, with multiple upcoming projects lined up for the following months.

“My goal for the future is to make a brand that resonates with a bunch of people, and to be able to express myself through fashion concept videos, and to be able to bring forth something everybody can understand … I also want to become a designer recognized for their technical ability,” Duncan said.

Duncan is also preparing for a swimsuit video shoot in August, putting together a website and online store to launch in September, and has future plans for an anime girl cosplay shoot and a menswear shoot.

Fashion has taught Duncan lessons on perseverance and believing in himself.

“Some important things I’ve learned in the industry [is] being tenacious and not being too hard on yourself, because I’ve seen every time I went to a fashion show, I was always the youngest there, and it’s really intimidating … You’re just like the new kid on the block, you’re just emerging, you don’t really know how others will see your collection,” Duncan said.

Duncan has faced hardships and financial barriers in the fashion industry, but he encourages other designers to not give up on their dreams and continue working to get better.

“I expect better for myself every time. I just looked at my New York [collection], and everyone loved it, but I know I can do better. Every time I make something I try to outdo myself, little by little,” Duncan said. “Even if it’s not your best, you’ll be able to do better next time … You are a lot better than you give yourself credit for.”