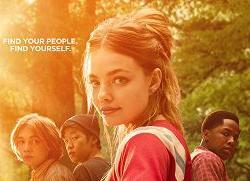 Hulu recently brought John Green’s best-selling 2005 novel to the streaming scene, and I’m just as emotional as I was in eighth grade.

The eight-part Hulu original adaptation follows the story of Miles “Pudge” Halter (Charlie Plummer) on his trip to Culver Creek, a boarding school deep in the swamps of Alabama. There he meets a ragtag bunch of scholarship kids, all pranksters and teenage rebels, and eventually joins their ranks as the good-hearted, blundering hero.

Throughout the episodes, Pudge falls in love with the mysterious, beguiling, and altogether chaotic Alaska Young (Kristine Froseth), becomes best friends with his roommate Chip (The Colonel) Martin and bonds with prankster Takumi (Jay Lee).

Teenage antics ensue. The group smokes contraband cigarettes by a creek and drinks the cheapest of cheap wine while playing pranks on the popular, privileged students, but the actual drama of the story isn’t the main focus.

Each character is dealing with the struggle of being an outcast and finding who they are. They’re going through the typical throes of teenage emotion, just amplified. That theme makes the plot relatable to anyone facing the bumps of growing up, from dealing with serious mental health issues to basic awkwardness in romantic pursuits.

The original novel wasn’t quite as tactful in addressing these issues. John Green instead used Alaska as little more than a tool in Pudge’s development. She was written as a Manic Pixie Dream Girl trope, but the Hulu adaptation fleshed her character out into something more.

Hulu also addressed a big issue the book skimmed over— racial discrimination in the South. The novel skimmed over The Colonel’s race and instead only focused on his socio-economic status, but the series placed an emphasis on it instead. It did so tactfully and truthfully, speaking up about an issue that is unavoidable in Alabama.

“Looking for Alaska” is easy to remember as little more than a pretentious novel, but this adaptation took the core pieces and reworked them into something better. It still maintained the crazy intelligent “I’m not like the other kids” vibe but did so without drowning you in it.

The modernized outlook on these issues mixed with superior acting and the familiar, but not overtly nostalgic, aesthetic of the early aughts combined to create something beautiful. It’s a departure from the stereotypical, shallow teen drama into something enjoyable for everyone, whether or not they were a fan from the beginning.

Overall, Hulu did a fantastic job. This show could have easily been an absolute disaster, but instead they made something both true to the original and fit for today’s audience.