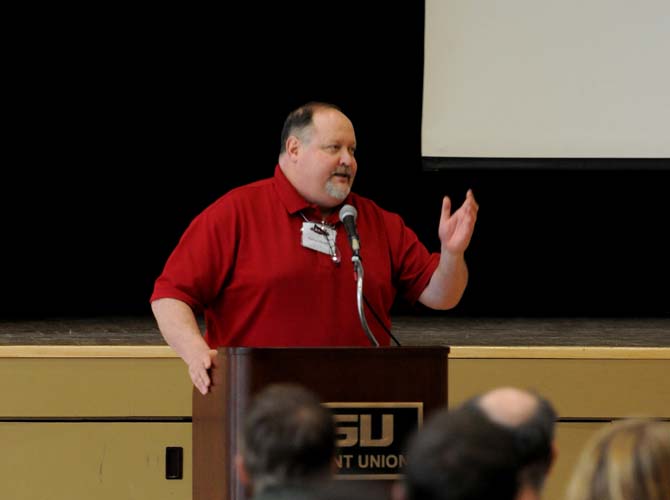 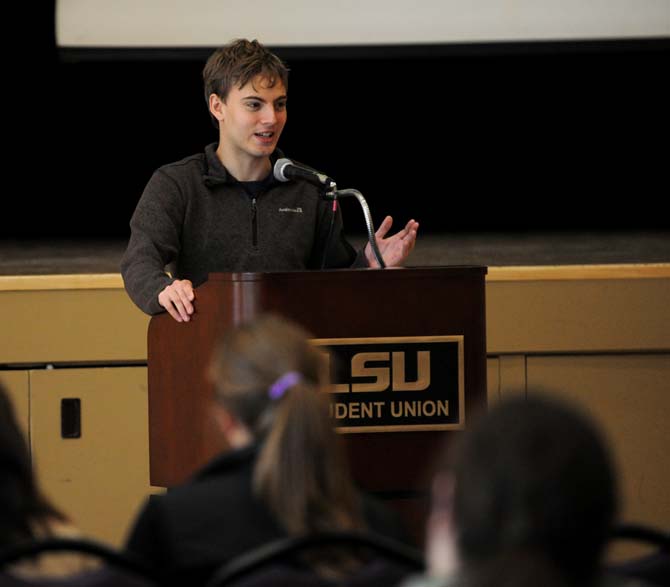 Keynote speaker Zach Kopplin speaks on the LA Science and Education Act to a group of secular humanists Sunday, April 14, 2013.

Keynote speaker Zach Kopplin speaks on the LA Science and Education Act to a group of secular humanists Sunday, April 14, 2013.

Speakers at Reason on the Bayou, the state’s first secular convention, stressed Sunday the importance of the youth population in the movement to push reason and logic over traditional faith and religious belief.

The University’s Atheists, Humanists and Agnostics club hosted the event in the Royal Cotillion  Ballroom of the Student Union, which brought together secular, freethinking and atheist groups from across the South.

The conference’s itinerary was filled with speakers who discussed issues including LGBT rights, the repeal of the Louisiana Science Education Act and the use of Christian textbooks in Louisiana schools.

Ex-Pentecostal minister-turned-atheist and DeRidder, La.-native Jerry DeWitt said the youth of the United States are embracing the secular movement, and its effects are showing.

“This is just a continuation of the Civil Rights movement,” DeWitt said.

Nate Phelps, estranged son of Westboro Baptist Church leader Fred Phelps and the conference’s keynote speaker, agreed with DeWitt about the significance of youth in the secular movement.

“A lot of these bad ideas have to literally die off,” Phelps said. “A lot of the change we do see in society happens when a new generation comes along.”

Phelps’ keynote address focused on his journey from evangelical Christian to atheist activist, as well as his father’s use of Biblical scripture to support his beliefs.

“With so many words, it becomes easy to mold them into whatever argument you want,” Phelps said of the Bible.

College groups from across the state had tables set up at the conference, including Louisiana Tech University’s Secular Student Alliance.

Chad Thibodeaux, AHA president and chemistry Ph.D. candidate, said the event’s attendance of about 130 was more than he expected.

“It was really good for a first-time get-together,” Thibodeaux said. “Most conferences and conventions only dream of a turnout like this for their first time.”

Secret Johnson, secretary of Louisiana Tech’s SSA, said she was expecting a bigger turnout at the conference, but she hoped that would change with future events.

Johnson said she and other Louisiana Tech SSA members refrain from describing themselves as atheists because of the stigma associated with the term.

Thibodeaux said events like Reason on the Bayou show that lack of a religious belief is becoming less of a social stigma in the United States.

Graphic design and art history junior Kim Allen called Reason on the Bayou the first step in the push for secularism in Louisiana.

“The fact that it is the first in history and it’s 2013 is kind of a big deal,” Allen said. “It says that Louisiana isn’t completely Catholic and conservative and right-wing and narrow-minded.”

The University is a good place to begin the push for secularism in Louisiana, Allen said, citing the diversity and large presence of students from other states and countries.

Ellen Farrar, painting and drawing junior, said she thinks the conference will grow over time and more people will see they don’t have to conform to one view point.

Thibodeaux said he is unsure if the University’s AHA group will host the conference again next year or if another Louisiana university will host it, but that it’s a definite possibility thanks to a larger amount of resources available at the state’s flagship school.

The University’s Atheists, Humanists and Agnostics club hosted Reason on the Bayou on Sunday…

“A lot of these bad ideas have to literally die off.”

Partly to mostly cloudy. A stray shower or thunderstorm is possible. Low around 75F. Winds light and variable.