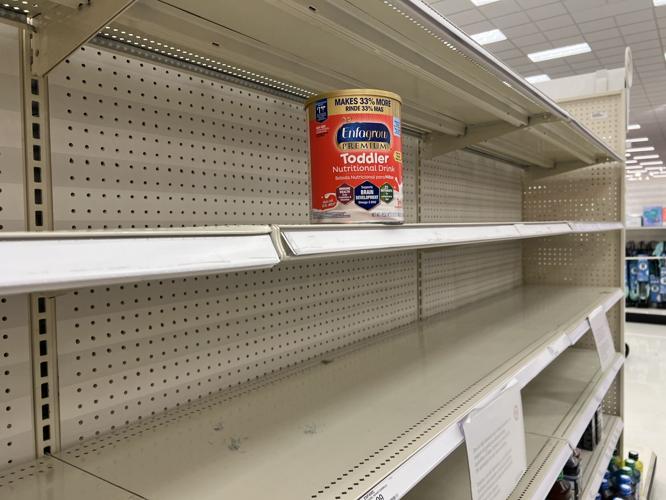 Shelves at the Target on Siegen Lane had only one can of formula on May 25 / Photo credit: Allison Allsop, The Reveille 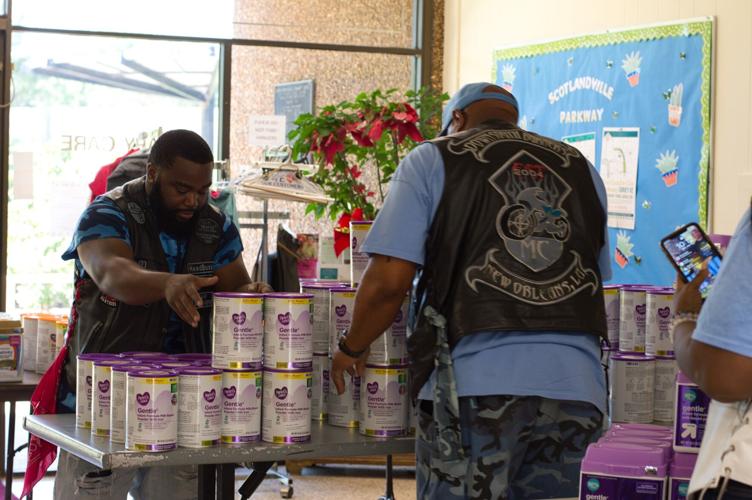 Parents struggling through the formula shortage have learned to rely on each other.

AJ Calhoun, a graduate student studying clinical psychology, is a father to a 7-month-old. Calhoun’s daughter is still receiving the majority of her nutrients from formula.

The Centers for Disease Control and Prevention recommends introducing new foods to children around 6 months of age; however, this is only an introduction, and breast milk or formula should remain the primary nutrition source until about 12 months.

Calhoun, with the approval of his daughter’s pediatrician, has started to introduce his daughter to more foods and purées. Formula has become a stressful item within his household, and the shortage has taken its toll on them. Calhoun said that he and his partner have to often travel as far as Opelousas, an hour drive from Baton Rouge, in order to find their daughter’s formula.

Calhoun switched his daughter to Enfamil after the Similac recall. He said that she was experiencing major health issues that subsided once they switched.

“She was spitting up in the middle of the night, and she would spit up almost after every bottle. It would start coming out her nose and her mouth. And it would cause her to stop breathing for a couple seconds.”

His daughter stopped having these issues after the switch, but they now must deal with the shortage.

Several issues have led to the formula shortage that is plaguing the United States. The effects on the supply-chain due to COVID-19, the recall on Similac, factory shutdowns, and up chargers have all contributed to this rising concern. While it may seem distant for many students on campus, this crisis is hitting close to home for many.

The shortage started after a recall on Similac was released in February. Abbott, the producer of Similac and other nutrient rich products, shut down one of their factories in Michigan after the recall. Abbott announced on Saturday that they would be restarting production.

Supply-chain issues due to the pandemic were affecting the supplies of baby formula before the recall and shutdowns, but it was most noticeable after Similac had a large decrease in production.

Several government agencies and individuals have stepped in to try to resolve the crisis. President Biden called on WIC to expand their waivers to make changing formula easier on parents. The Food and Drug Administration has increased international imports of formula from several companies. Biden initiated Operation Fly Formula to use Department of Defense aircrafts to transport the international formula.

Although these changes have been rolled out, it takes weeks to see the results on the shelves. Until then, parents will continue to struggle.

Calhoun has relied on family and friends during this time, saying that they’ve received formula from Georgia, Pennsylvania and Florida.

Some people do not have family to rely on to send them formula or family members may not be able to find it either. Parents have started to rely heavily on their communities, especially their online communities.

Facebook groups such as Moms Of Baton Rouge and Formula Spotted 225 have banded together to create a space where parents can rely on each other. Members of these groups will post about any stock they can find so that others know where to go. They will also be on the lookout for specific brands or types if they know someone else needs help.

The comment sections within these groups are filled with overwhelming support. Formula Spotted 225 even has a formula pantry put together by one of its members.

Local Facebook groups are not the only online support being seen at this time. Raven Lindsey, a 24-year-old from Baton Rouge, said that she once posted on Twitter asking her friends to keep an eye out for a certain formula type. She then received a direct message from a lady in California. The woman overnighted the formula to Lindsey and did not charge a dime.

While there is immense support for mothers online, there are also people attempting to take advantage of them. Lindsey explained that she often encounters people with a surplus of formula trying to sell it and make a profit.

Lindsey said that this is not something that people should be trying to make a profit on. She said that these resellers are creating an inconvenience for mothers trying to find the products they need for their children.

Buying formula from another person would not be covered under WIC, which many mothers use to afford the formula.

Lindsey said that the current process for WIC is very frustrating. She said that to buy a new or different formula under WIC funds, you have to first go into the office to change it on your account. This is stressful even without a shortage because parents often have to try multiple types of formula before they find out which one is suitable for their child.

The shortage heightens this issue. Parents sometimes must stray away from their normal formula due to limitations on stock; however, by the time they are able to receive an allowance through WIC, the store may be sold out completely.

Lindsey also said she is having issues getting her WIC accepted. Thankfully, she has been able to afford formula and has had community support when needed.

One community resource that recently helped her was a formula distribution event put on by Councilwoman Chauna Banks. Banks hosted the event on Saturday at the Jewel J. Newman Community Center. They had 375 cans of formula ready for distribution. The formula was donated shortly before the shortage began.

“All of a sudden we start hearing about the baby formula shortage,” Banks said. “So that’s when we decided to schedule the drive. It was just a coincidence that we had all this baby formula.”

Banks was assisted on the day by the Down South Burners Motorcycle Club. They also handed out distilled water and baby wipes with every can of formula.

With the help of Facebook groups, community events, and help from friends and family, many parents have not found themselves in dire circumstances. However, Dr. Pamela Woods, a pediatrician with Children’s International, warns against certain actions if parents do find themselves in these situations.

“We really don’t recommend making your own formula,” Woods said. “Some parents may have tried to stretch the formula by adding more water to the bottle when making bottles, that’s something else we don’t recommend.”

Woods said these actions could lead to dehydration, electrolyte imbalances, hospitalization, and seizures. She said that it is usually OK to switch formulas if necessary, but speak with a pediatrician first. Woods said that pediatrician offices sometimes have samples they can provide to parents, but they are also being affected by the shortage.

Anyea Coleman-Vargas, with the Louisiana Primary Care Association, said that community health care workers can help mothers in need. They have a network of resources and connections to help people who are struggling and do not know where to go next.

“This is the time to lean on your community," Woods said.