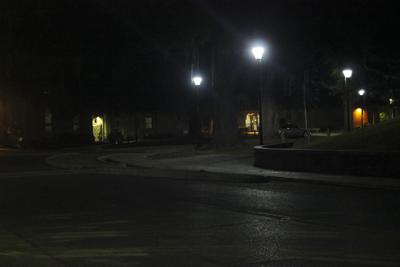 Bellah Bultron was cornered by two men driving a truck one night as she walked across the un-lit bridge leading to the University Recreation Center. Even after asking to be left alone, Bultron said the men harassed her with questions to see where she was going. The men eventually relented and let her pass, but the experience served as a warning to Bultron that other situations may not turn out so harmlessly. Now, she avoids going anywhere at night without a male friend accompanying her.

Since Husch Blackwell’s Title IX conclusions were presented at the March 5 Board of Supervisors meeting, the LSU community has focused heavily on the need to change campus culture. Many female students have suggested that the current culture is one in which women feel victimized and physically unsafe on campus, primarily due to lighting issues.

"As women, we're made to feel crazy whenever we think that everyone out there is going to hurt us or threaten us," Bultron, a psychology freshman, said. "But you can't be overly precautious. Too many things happen at our college to not be prepared."

Bultron said on one occasion she was approached by three male students while walking across the Parade Ground back to her dorm at night. She recalls feeling threatened and unsafe, and said she would advise men to never approach a woman when she is alone in an isolated area.

"When three men approach you, even if they don't mean it, it's very intimidating, it's very scary, because if they did try something, how am I going to defend myself against three men?" Bultron said.

Chemical engineering freshman Kourtnee Holzendorf said she usually feels unsafe when on campus during the evening because of how poorly lit areas around LSU are.

"LSU could follow in the footsteps of many other schools that have the blue light towers that students can press in order to send an emergency signal in the event that the student feels unsafe," Holzendorf said.

Mass communication freshman Emma Trigg said that campus is poorly lit and walking around after dark is "definitely a worry” for her.

"There needs to be a lot more lights around campus, it is extremely dark in the parking lots when you're walking back to your dorm," Trigg said.

Co-president of Tigers Against Sexual Assault Angelina Cantelli said that the nature of LSU's unsafe environment is unique from other parts of Baton Rouge, and administration should be doing more to solve it.

"I think campus is more unsafe [than other parts of Baton Rouge] in the sense that there are certain types of violence that are unique to college campuses," Cantelli said. "Women are more likely to experience sexual violence while they're in their undergraduate career than at any other time of their life."

Cantelli said she's noticed men at LSU are more willing to approach women with no precursor to ask them for a date, their phone number or social media. These situations usually don't occur around other parts of Baton Rouge, she said.

Cantelli said she believes LSU needs to take definitive action to make campus safer instead of repeating the same excuses and doing nothing.

"Every year, administrators go to the Student Government ‘Light Walk’ and they walk around campus to identify areas of poor lighting," Cantelli said. "But have any of them been fixed? They keep doing it every year. It's been excuse after excuse."

Biochemistry junior Laiba Iqbal serves as director of Student Government's Department of Campus Affairs and Sustainability, which oversees the Light Walk every year. She said areas that students have reported as unsafe on the Light Walk have yet to be resolved, such as the Enchanted Forest and Greek Amphitheater area.

“My perception of administration is that you have to really pester them and bother them and set up meetings all the time to get what you really want,” Iqbal said.

She added that administration has been unwilling to consider pursuing sustainable lighting sources on campus every time her department has brought it up, and because of this it doesn’t surprise her that they would brush off other related safety concerns.

“College is supposed to be safe,” Iqbal said. “You're here to succeed and learn."

TASA believes that a large part of solving the sexual assault misconduct issues on campus begins with better educating students about their rights and responsibilities at LSU.

"There's no reason why during a football game there can't be a 30-second [video] that talks about your rights as a student on this campus," Cantelli said. "First of all, the athletics kind of owe it to the women on this campus. And also, we have resources that we use to promote other things around campus, it isn't hard. It would be free for LSU to advertise these things, they just have to commit to doing it."

One resource students can make use of is the Sexual Trauma Awareness & Response (STAR) center, which offers free legal services to victims of sexual violence. Cantelli, who interns at STAR, said before reporting anything to LSUPD she would first go to STAR to make sure the process would be handled correctly.

"I would want to report to LSU but I don't trust that they would do it correctly," Cantelli said. "I would get legal representation first and then report, so that if they're shortcutting anything I know there's someone on my side doing what's right for me."

Political science, Spanish, and international studies junior Abbie Grace Milligan serves as Director of Safety for Student Government and said she has concerns about the vulnerable position women are put in while on campus. She is hopeful that the Husch Blackwell report will resolve some of these issues.

"I live on campus and I almost never feel safe walking to and from my car at night," Milligan said. "Lighting is very poor and I rarely see police canvassing the area."

Director of the Women’s Center Summer Steib said she is aware of the concerns students have presented about campus safety and she is currently working with several student organizations to address them.

Associate professor of geography and anthropology Jill Trepagnier shared that she has never felt threatened or unsafe while walking around campus at night, but that she generally does not like to be out when it’s dark and tries to avoid it.

Trepagnier said that students remembering faculty are there to help is "an important part of the puzzle." She hopes students feel comfortable enough to approach her and other professors for guidance during the oftentimes complicated sexual assault process.

"Make sure you come to us if something happens," Trepagnier said. "Trust that we will help you."

Trepagnier suggested that LSU implement call boxes around campus that immediately call the police and sound an alarm when picked up.

"I love environmental conscientiousness, but I am all for more lights — maybe solar powered [lights] that hold a charge for night?" Trepagnier said.

A few clouds from time to time. A stray shower or thunderstorm is possible. Low 63F. Winds ESE at 5 to 10 mph.

Mostly cloudy in the evening then periods of showers after midnight. Low 56F. Winds N at 5 to 10 mph. Chance of rain 40%.