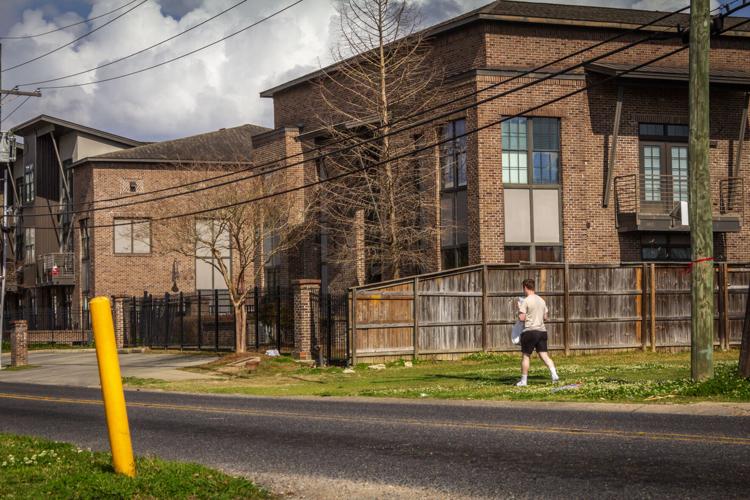 A pedestrian walks back to his apartment Sunday, March 6, 2022, on East Boyd Drive, Baton Rouge, La. 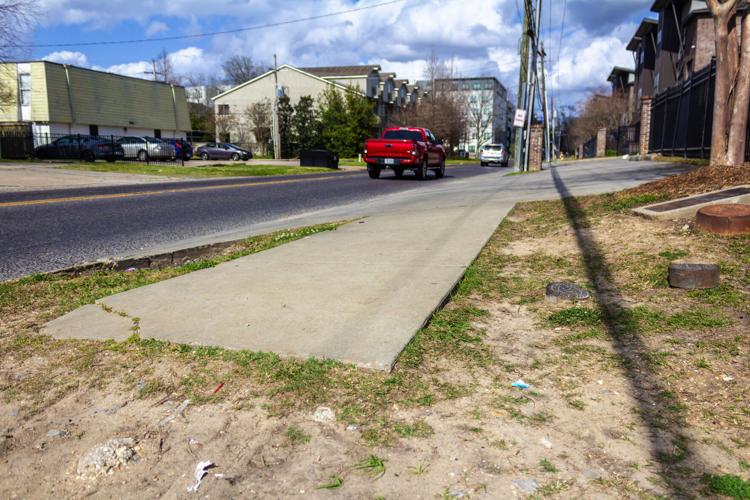 A sidewalk ends Sunday, March 6, 2022, near the intersection of East Boyd Drive and Burbank Drive.

Whenever French junior Ali Redmann’s bike was stolen, she was left without any reliable transportation to get to LSU’s campus from her apartment off Nicholson Drive.

“There are several blocks by my apartment complex that don’t have any sidewalks at all and you’re walking through people’s yards,” Redmann said. “My apartment is walking distance in theory, but that is really just hypothetical.”

Even when she did have a bike, navigating Baton Rouge streets with no bike lanes or cracked sidewalks was dangerous. She was once nearly hit by a car while riding her bike on East Boyd Drive.

Using her hand as a turn signal, Redmann began to turn and was interrupted by a swerving car which nearly knocked her off her bike in the middle of the road.

Despite choosing to live at University View because of its proximity to grocery stores and campus, living without a car has also presented health issues to Redmann, who takes prescription medicine. The nearest pharmacy that supplies her medications is down a busy highway and across streets without crosswalks.

“I have to take my life in my hands and run for it if I want to get my prescription medication,” she explained. “Or I have to wait for a friend with a car.”

Life without a car in Baton Rouge is difficult and dangerous given the city's lack of pedestrian-friendly infrastructure. If LSU students don’t live in a handful of nearby apartment complexes with sidewalks or safe bike lanes leading to campus, college life without a car can become a dangerous game of "Frogger" in the car-centric city.

This reality is especially noticeable in the areas around LSU’s campus, where only a handful of off-campus apartments realistically allow pedestrian accessibility to campus.

Those living in apartments on Burbank Drive past the intersection with Lee Drive or in the student living complexes along the treacherous Nicholson Drive, life as a student without a car is more difficult than expected.

Outside of on-campus apartments and dorm life, just six apartment complexes are close enough to campus to allow for walking or biking options for students. The university bus system reaches some off-campus apartments, but some students have complained about the unreliability of the system.

Left without any other option, some students have adapted to the quirks of the bus system.

Music education freshman Lily Espinoza explained that she has adapted to using the Campus Transit transportation system to alleviate life without a car. The on-demand system is available between 5 p.m. and midnight and moves students to and from locations they choose, as opposed to a route-based system.

“As for the buses, I will say I am a strong supporter of the buses and I’m surprised more people don’t use them, specifically the on-demand,” Espinoza said.

But even the services designed to assist in life without a car can be troublesome.

“I tried using the on-demand buses once,” said biochemistry freshman Anna Montgomery. “It was such a bad experience I actually haven’t tried again. I do in fact just walk across campus after dark, which isn’t a super safe decision, but it’s the one we’re working with.”

For Espinoza and others, the transit system is flawed, but they’ve gotten used to the quirks and even know which bus drivers to count on.

Sociology sophomore Brian Castanza joined the military in between freshman and sophomore year to pay for college. He wants to make sure he’s financially stable before purchasing a car.

“It’s hard being a college student these days. Everything’s so expensive,” he said.

Castanza generally relies on the buses. He describes inconsistency in the TransLoc app, as well as the buses themselves.

“I’m running to the bus stop because I’m 15 yards away, and they literally do a touch-and-go, they don’t even stop,” Castanza said. “The bus should wait at the bus stop for at least 30 seconds or 10 seconds.”

Castanza wakes up two hours before his classes start so he can go to physical therapy and catch a ride to LSU on the buses. Still, he likes the options LSU’s buses offer; he just wishes that the system was more predictable.

“The campus proper has about average walkability with sidewalks and crosswalks,” civil and environmental engineering professor Brian Wolshon said. “Once you get off campus, I think it’s not really that good.”

Fatal incidents—like the one that killed LSU professor Norimoto Murai last year—result in calls for bike lanes and more pedestrian friendly infrastructure, but the calls fall on deaf ears at the university level, Wolshon explained.

Norimoto Murai, an accomplished LSU professor and researcher of 37 years who instilled in hi…

Once the sidewalk transitions away from campus property, it becomes an issue of the city-parish. A large part of this issue, particularly on Burbank and Nicholson, he explained, is a result of archaic planning for when the area was less residential.

“The problem is, once it's built, we are kind of stuck with it,” Wolshon said. “These developments are coming in because they provide convenience but what the city hasn’t been doing a good enough job at is making sure there are walkable routes with connectivity in its sidewalks.”

Once something is built, like the multiple strip malls along Burbank with very little pedestrian access, it’s hard to go back and update things, Wolshon said.

The rapid development of the area around campus during the last several decades is a primary culprit for why it is so hard to access campus from most off-campus apartments.

“There’s no sidewalks. No nothing. If you don’t have a car, you can’t get there,” said computer science freshman Donovan Brown.

Brown doesn’t have a car because he and his family can’t currently afford the finances that go with owning a vehicle. He’s saved the money needed to buy one, but things like gas, insurance and regular maintenance is currently too much for his budget.

“I could get one right now, but there’s just so many fees attached, I just can’t,” he said. “I’m working minimum wage right now.”

Brown holds a job on-campus as a desk assistant to his residence hall. Like many jobs at LSU, the pay orbits minimum wage and isn’t enough money to cover the fees driving would include.

Not having a car limits the capacity to find a higher paying job — Brown is stuck with options nearby LSU and therefore the pay that goes with it.

Even students still living on campus struggle if they are without a car. Despite more access to campus’ facilities, freshmen living in dorms still feel the reality of Baton Rouge as a driving city.

Montgomery shares a car with her sister and says that it’s simply not her turn to have it for this year. She’s from Lafayette and usually can get a ride home from her sister, also a student at LSU.

Generally, Montgomery finds that day-to-day on-campus without a car isn’t so bad. She walks through campus all the time so it’s usually just groceries and odd tasks that are especially inconvenient.

“Whenever I’m trying to do random errands, like I’m trying to get a scholarship and for it, I need a single picture of myself printed out and there isn’t anywhere on campus where I can do that,” Montgomery said. “So I have to schedule a time when my friends or sister can drive me. It’s just those weird, specific errands that show I don’t have car access.”

Burbank, home to multiple apartments including the Legacy, the Lark and the Oliver, is an example of the failure to coordinate development, said Jamie Setze, Executive Director of the Capital Region Planning Commission. Burbank was built over 40 years back and has taken that time to develop to the state it is now, the early development of which did not foresee the need for bike lanes and pedestrian crosswalks.

“Where we came from was basically 100 years of growth that wasn't well coordinated,” Setze said. “There have been incremental improvements over time, but there's also been incremental failures to improve as well.”

Setze explained that the solution to such a problem around LSU is a simple one, specifically as it relates to high speed car routes like Highland and Burbank.

“Eighty years ago, before cars were running up and down Highland, it was actually a very walkable road. But it turned into this high speed car route,” he said. “It really doesn't handle that many cars. We built Burbank just to the south of it with four lanes so that Highland, other than local road access, really could be deemphasized.”

I wish I had researched the housing situation more before coming to LSU.

As gas prices across the country skyrocket over $4 per gallon, LSU students are feeling the pain.

'It was some times that I wanted to give up': Tiger Trails driver reflects on driving during the pandemic

During the course of the pandemic, Tiger Trails drivers were the enforcers of a federal mask mandate for public transportation, causing frustr…

Considerable clouds early. Some decrease in clouds later in the day. High 81F. Winds SSW at 10 to 15 mph.