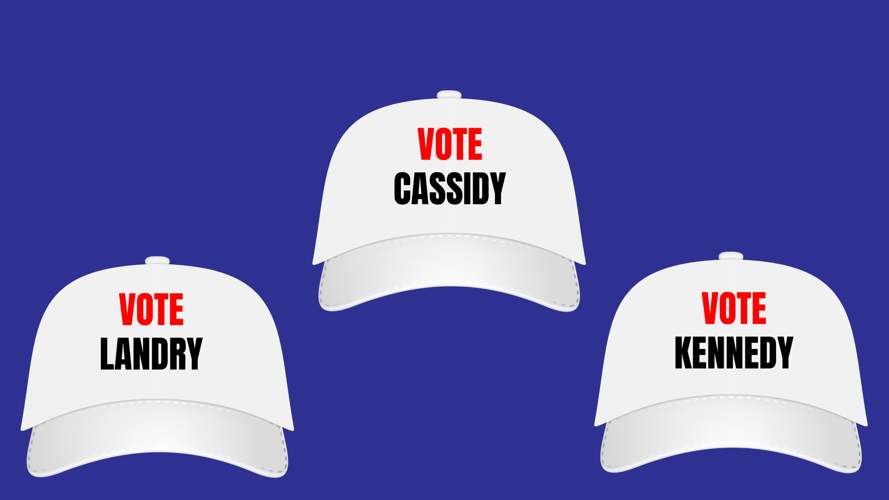 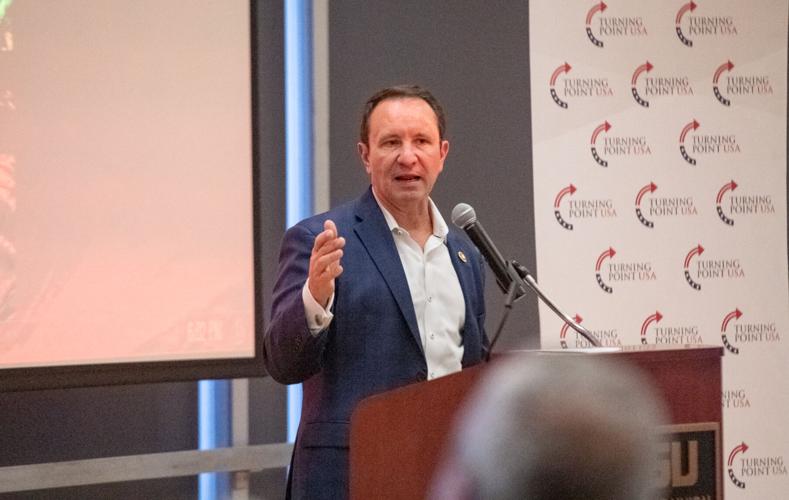 Attorney General of Louisiana Jeff Landry addresses the room on Tuesday, Oct. 25, 2022, in the Student Union in Baton Rouge, La.

The campaign trail for the 2023 governor’s race has officially started, especially for Republican politicians seeking to take control of the office from Gov. John Bel Edwards, set to end his second term next year.

Only one candidate, Attorney General Jeff Landry, has officially started a race for the office. Landry, currently in his second term as attorney general, announced his candidacy on Oct. 5, receiving an official endorsement from the Louisiana Republican Party a month later on Nov. 7, a day before the midterm election.

For many college-age conservative voters, Landry is the clear frontrunner for the governor’s seat next year. About two weeks before his endorsement from the state GOP, Landry spoke to LSU’s chapter of Turning Point USA, a conservative non-profit organization, meant to “organize students to promote the principles of freedom, free markets, and limited government,” according to their website.

Political science senior Sal Montalbano, a member of the organization’s LSU chapter since fall 2021, said that he is “in full support for Attorney General Jeff Landry.”

“We need someone who will take action, serious action, and make change in Louisiana,” Montalbano said. “And Jeff Landry…has proven it.”

“We see what’s going on in our backyard in Baton Rouge; people are scared to pump gas, scared to go out at night and have a good time. A lot of college students are looking to move away to other states. I want someone who will step up and give the Louisianans and great smart students a reason to stay in this great state and use what we have.” Montalbano said. “And I believe Jeff Landry will be the best candidate for that.”

Landry, running unopposed at the moment, is not the only candidate expected to run. Other Republican officials expected to run include Lt. Gov. Billy Nungesser, State Treasurer John Schroder and recently reelected Sen. John Kennedy, but none have made an official announcement on their candidacy.

Kennedy, however, said he is “giving serious consideration to entering the governor’s race” in a public statement on Nov. 14.

“Over the last year, Louisianians have asked me time and time again to come home to serve as governor during these difficult times,” the Senator’s statement read. “I’ll be announcing my decision soon.”

A Republican official who will not be involved in the 2023 governor’s race is Sen. Bill Cassidy, announcing on Friday that, rather than running for governor, he has “chosen to remain focused on the job [he] was sent [to Washington D.C.] to do and to see these efforts through.”

Regardless of whose name appears on the ballot in November 2023, politically engaging young voters is essential to any campaign for state executive.

“I have not found young people in Louisiana to be as politically engaged or active on a broad scale,” said Melissa Flournoy, an adjunct political science professor teaching Louisiana politics. “The challenge to get younger people to vote in the governor’s race is really going to depend on if any of the candidates want to talk about issues that are important to college-aged students.”

Josh Cummings, a political communication senior from Athens, Georgia, isn’t able to vote for Louisiana’s governor in the coming election but said that if he had a vote in the state, he would support Landry, specifically for his oppositional stance on issues like gun control, abortion and vaccine mandates.

The continued maintenance of Louisiana’s oil and natural gas production industry is also an issue Cummings will be looking at when deciding who he will support for the governor’s seat.

According to Flournoy, Landry has the support of ultra-conservative voters who supported former President Donald Trump. This, she said, may end up being more of a crutch than a benefit.

“I’m a little concerned that, at least Kennedy and Landry, really want to be Donald Trump,” Flournoy said. “They’re gonna focus on divisive messages and culture war issues that really have nothing to do with making Louisiana a better place to live.”

'They're going to be held back here': Lack of opportunity, parents push LSU graduates to settle outside of the state

Flournoy said that one of the deciding factors in the upcoming election, especially for young voters, will be focusing on ending the brain drain, or the emigration of college-educated Louisiana-born residents, the state is currently experiencing.

According to data compiled by Gary Wagner, an economist at the University of Louisiana at Lafayette, Louisiana has the second-worst net migration from the state, behind only Mississippi, among college-educated residents when compared to the other nine Southeastern states.

The candidate that will win the election, Flournoy said, is one that has a vision for Louisiana’s future and will help bring the state further into the 21st century.

“So far, I’m not hearing anybody talk about solving some of the economic challenges that can improve the quality of life in Louisiana for all families,” she said. “I really hope someone gets in the race for governor that wants to talk about the future and not talk about the culture wars or the past.”

A few clouds from time to time. Low 61F. Winds light and variable.