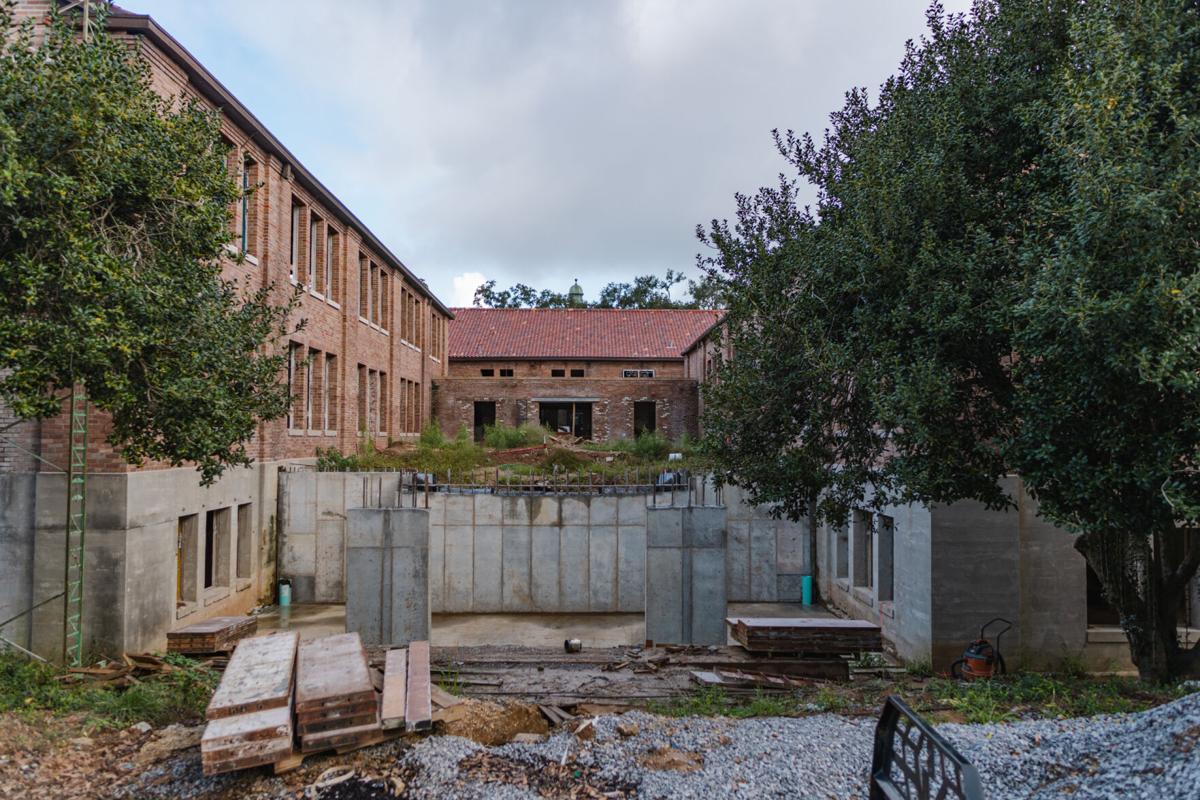 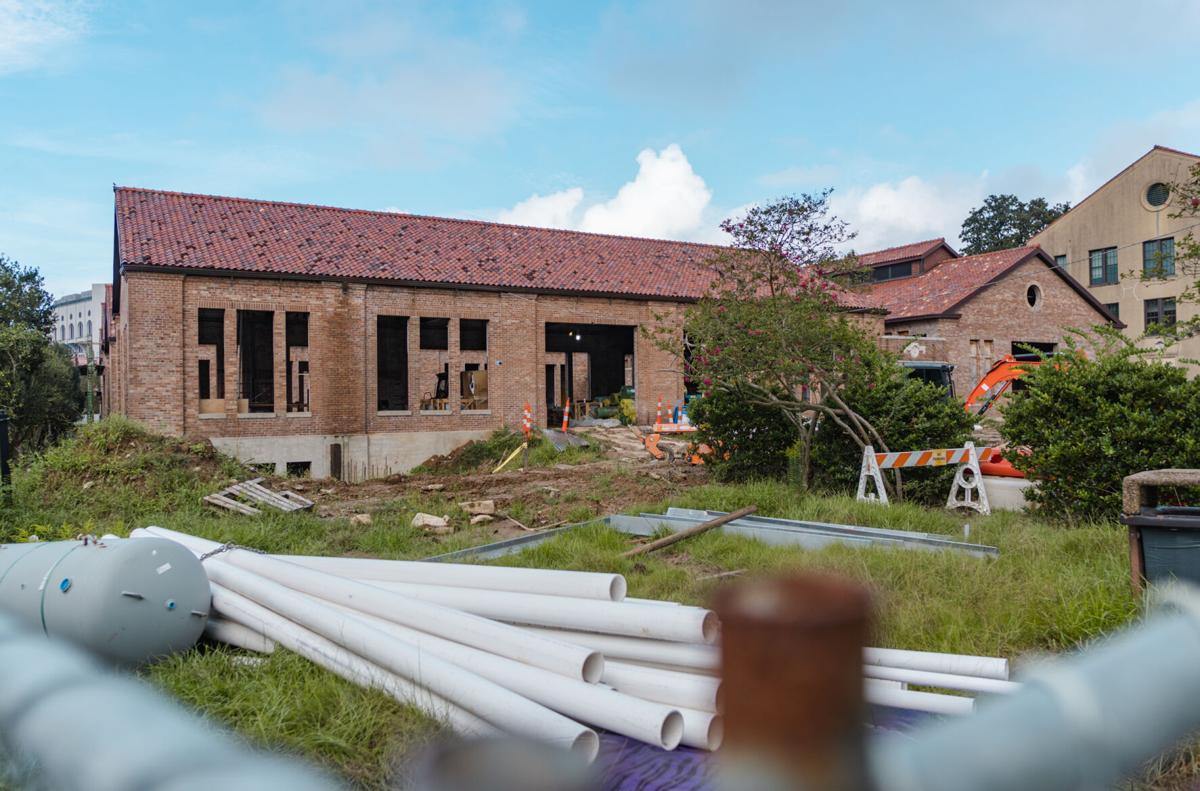 Pipes and other construction equipment sit near the LSU Studio Arts Buildings on Sunday, Oct. 3, 2021, on South Campus Drive in Baton Rouge, La. 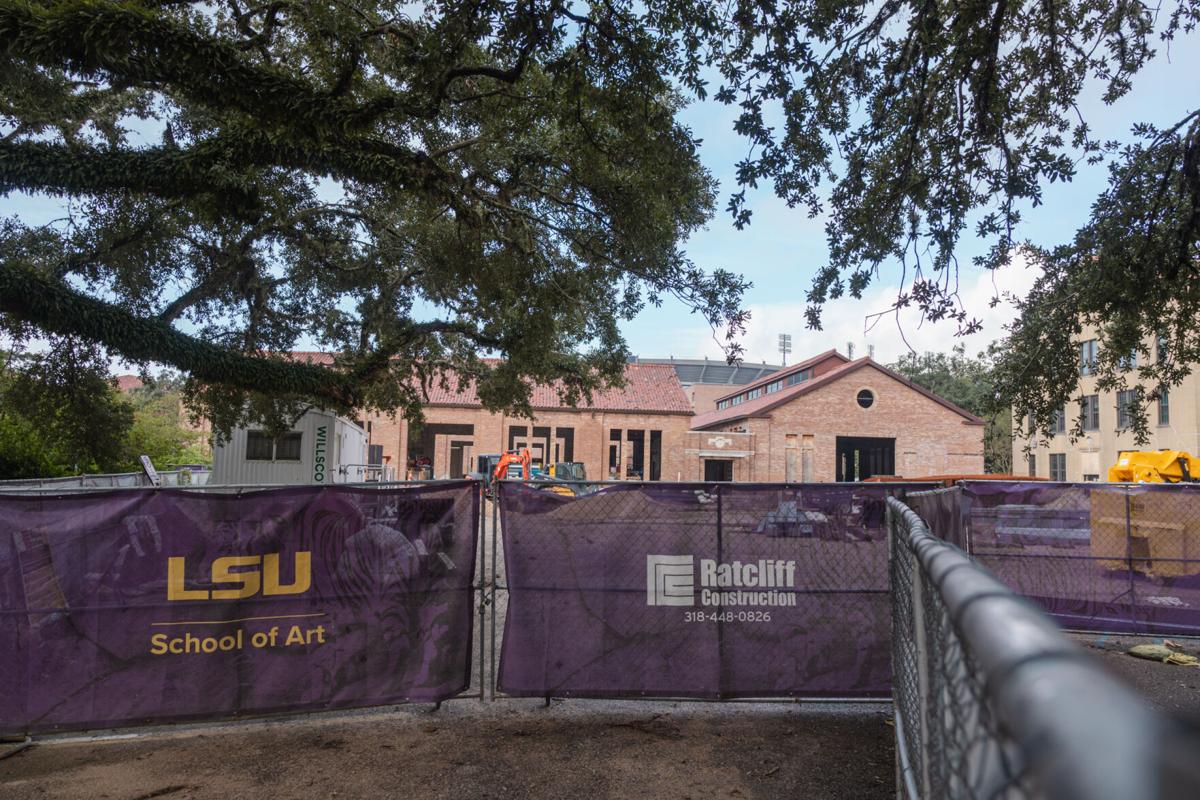 Pipes and other construction equipment sit near the LSU Studio Arts Buildings on Sunday, Oct. 3, 2021, on South Campus Drive in Baton Rouge, La.

After 46 years since the first meeting to plan the project, the Studio Arts building is finally under renovation.

The 41,500-square-foot building is one of the first built at LSU around 1924 and marks the southernmost edge of the original campus. It hasn’t undergone any major renovations since then, causing the building to deteriorate greatly over the years.

“It was like a trip into a different century,” Studio Arts Director Rod Parker said. “The building was decrepit beyond all imagination.”

Parker described the building as an enormous space, one that was home to various creatures, including rats, squirrels and spiders. On top of that, most of the building was not air-conditioned.

The aging building had been on LSU’s major repairs list for many years, and renovation plans have been ready for implementation since 2013. According to Parker, funding is the main reason it took so long for the project to begin.

The project had been attempted in previous years, but was shelved twice due to the lack of budget. The third time around, the design had to be modified to ensure it met standards. Priority I funding from the state was approved in the 2019-2020 legislative session, and the renovation will cost a total of about $18 million.

In addition to state funding, the university received funding from private donors, including Roger Ogden, known for endowing the LSU Roger Hadfield Ogden Honors College building in honor of his father.

“We hope that this donation to this building and his participation in it means more opportunities for interactions between our students and the New Orleans art community,” Parker said.

The building was recently approved to be renamed the Barnes Ogden Studio Arts Complex.

Paul Favaloro, the director of Capital Project Management and Development, oversees Capital projects at LSU. According to Favaloro, the original building needed a significant amount of repairs and had about $1 million in deferred maintenance issues.

Favaloro said that while roofing repairs done a few years ago were able to protect the building from further decay, the building was still not up to code, and even had asbestos in the tunnels that run below the building.

“The systems had exceeded their life expectancies,” Favaloro said. “It was in disrepair.”

Favaloro affirmed that the renovations are going according to schedule, and they plan to finish over the summer next year.

The Studio Arts building is owned by the state of Louisiana and is listed in the National Register of Historic Places. Because of this, it has to undergo a historic renovation that complies with its building requirements. The outside will look like the original building, with a state-of-the-art interior.

“It did look outdated, but the character makes the whole building so unique, especially for an arts building,” said project manager Vincent Guillory.

New double-pane windows are being installed, along with aluminum doors instead of wood to match the original look while still being up to date.

Among the other upgrades will be a 100-seat classroom equipped with desks and studio space, which will enable the professors to teach in more interactive ways.

New air conditioning units are being installed with more energy-efficient systems, updated building materials and modern technology. Currently, construction is installing steel beams, running wire, and putting a new roof on the center of the building.

Students will also be able to store their tools and art supplies in lockers near the classrooms.

“It’s an iconic building on campus,” Favaloro said. “To see it finally get the restoration [needed] to bring it back to its prominence, it’s really exciting to see.”

Guillory echoed this sentiment. “I think people are going to be in awe when they see the finished product. It’s going to be a showcase building,” Guillory said.

The new building will enable the studio arts department to maintain its population of over 500 undergraduates students.

Current displaced studio arts students are taking their classes all over campus. Sculpture classes are being held in the basement of Atkinson Hall, painting and drawing are taught on the second floor of Foster Hall, graduate painters work in the Dairy Science building, the Electrical Engineering building holds the kiln shed and spare equipment is being stored in the Food Science building.

After all this time, “people thought [the renovation] was never going to happen,” Parker said, noting that many people have put in effort over years to get the project done.

He envisions the new building will be “a source of pride” for the LSU community.

Renovation updates to the building are posted on the LSU College of Art and Design website with pictures of the design plans and photos of the construction.

“I think it’s going to be transformative,” Parker said. “Everyone will see the evidence that the LSU campus and the state of Louisiana actually cares about arts education.”