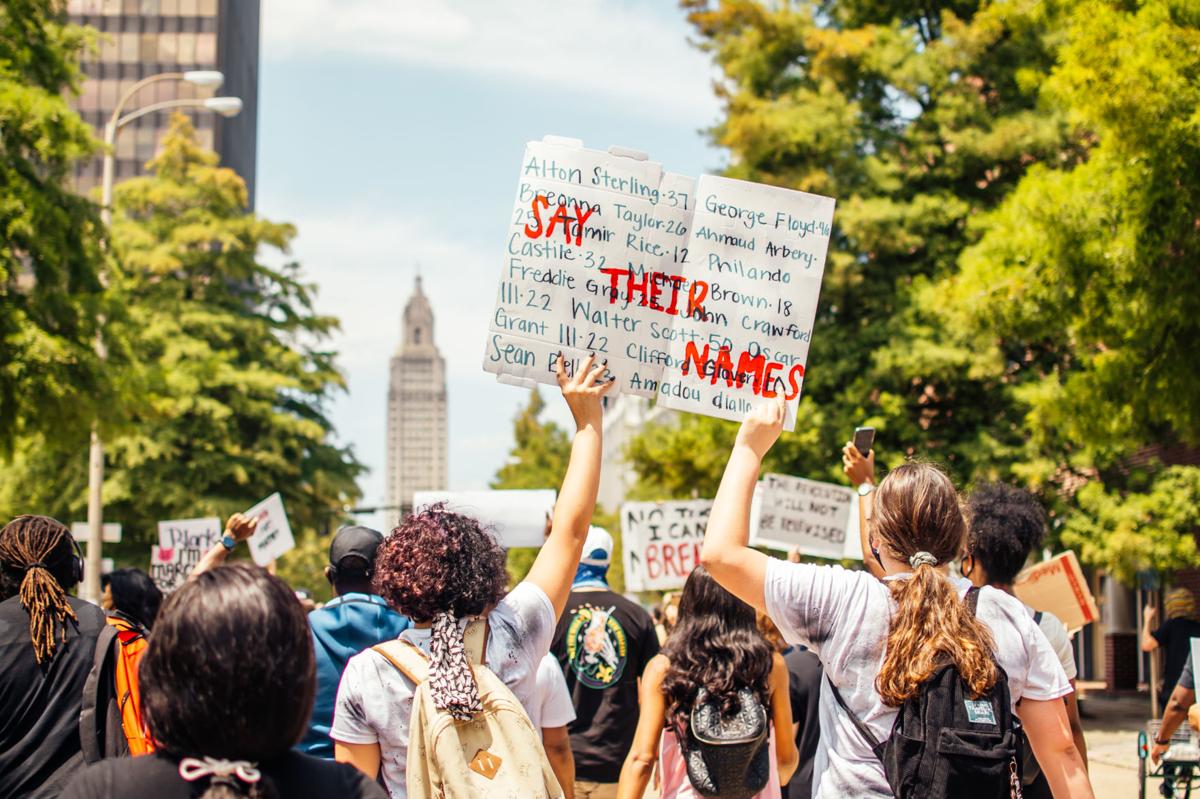 Protesters hold up theirs signs as they march on Sunday, May 31, 2020 during the protest over George Floyd's death in Galvez Plaza in Downtown Baton Rouge. 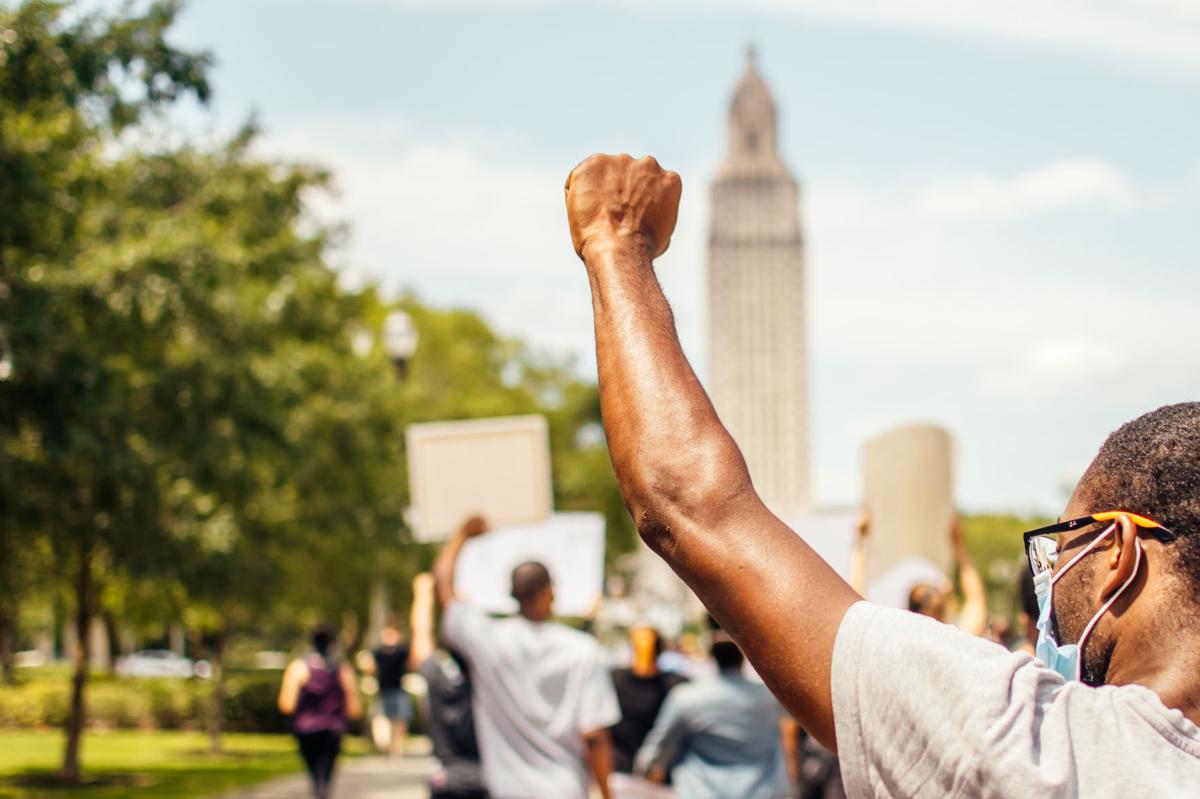 Protesters march peacefully to the State Capitol on Sunday, May 31, 2020 during the protest of the death of George Floyd in Downtown Baton Rouge. 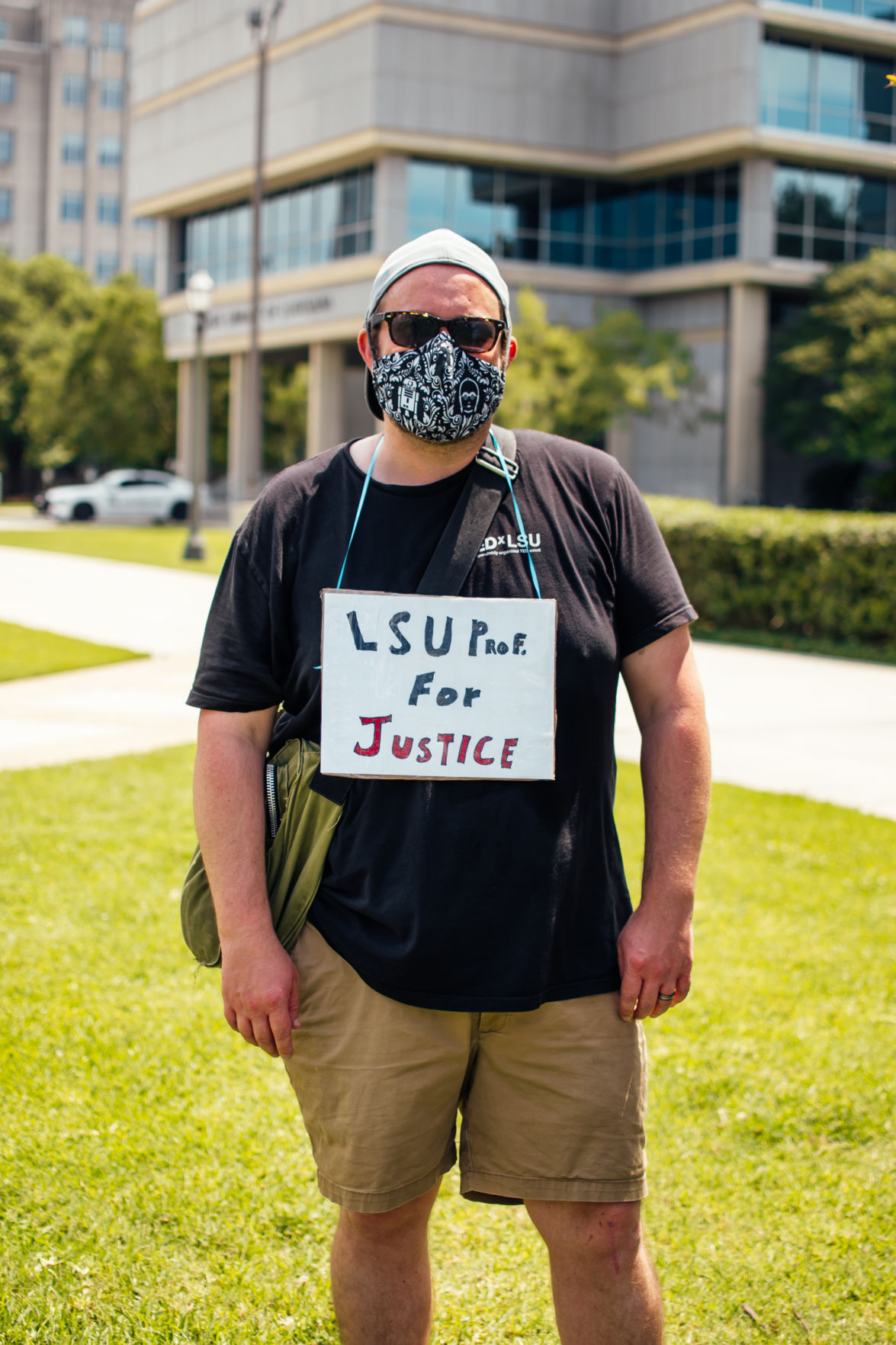 An LSU Professor wears an "LSU Prof. for Justice" sign on Sunday, May 31, 2020 during the protest of the death of George Floyd in Downtown Baton Rouge. 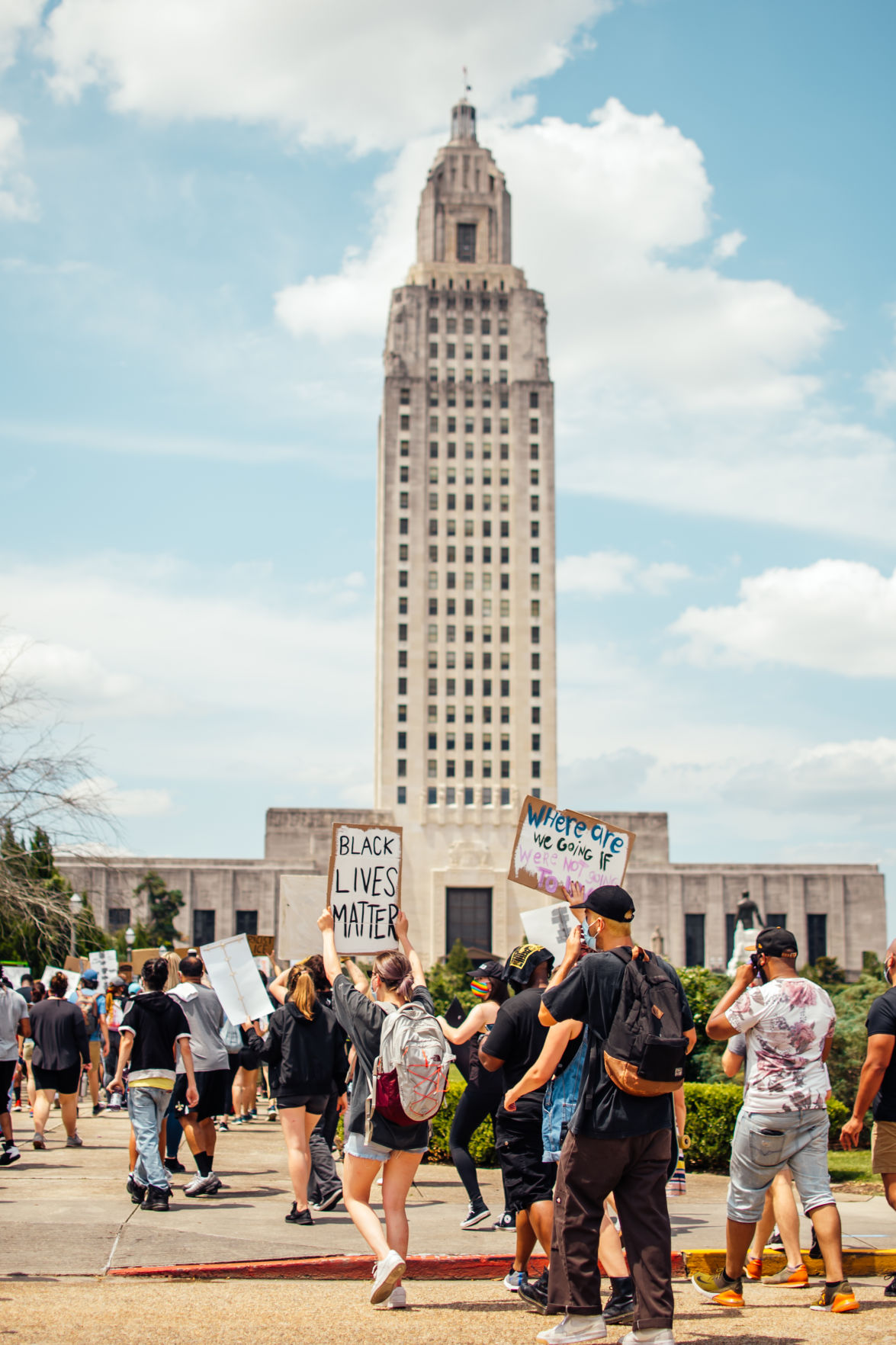 Protesters hold up their signs as they march peacefully to the State Capitol on Sunday, May 31, 2020 during the protest of the death of George Floyd in Downtown Baton Rouge.

People of all colors arrived in Galvez Plaza, being met with free donuts, masks and water. Some people even brought their own stash of masks and water to provide for the day of peaceful protesting. This was all because of a peaceful protest organized by high school students for the Black Lives Matter movement.

Prior to the event, the 17-year-old organizer Colleen Temple of the University Laboratory School took to Twitter, asking people to join her and her community to wear a mask for the non-violent protest against "the wrongful death of George Floyd."

Myself and a couple of other people have organized a NONVIOLENT protest for Sunday May 31. We will meet at the Galvez Plaza and march from there to the New State Capital. Once we arrive, a couple of us plan on giving short speeches. Please bring signs if you can and wear masks. pic.twitter.com/Ff7ngq7hEU

In a viral video, George Floyd was seen being kneeled on the neck by Minneapolis officer Derek Chauvin for minutes, ultimately killing him. Due to national demand, Chauvin was fired from the Minneapolis police department, then put into protective custody at Ramsey County Jail in St. Paul, MN. This event has caused America to erupt with a call for an end to police brutality and the chanting of "Black Lives Matter"

At the time, Baton Rouge High School's Mia Spears and her peers were unaware as to whether or not a protest was being created for the Baton Rouge area, so she decided to make one herself.

"We have our own political ideas, have things to talk about what is socially wrong in America, so why don't we do something about it?" the 16-year-old said.

Spears gathered together Temple and Baton Rouge Magnet School's 16-year-old Noah Hawkins to construct the plans of the protest since Wednesday, May 27, working "around the clock" and even losing sleep.

"We just hope the people of Minneapolis and [the people] all over America know that the youth of Baton Rouge stand in solidarity with George Floyd and his family," Spears said. "We do not stand with racial injustice and the constant use of police brutality and excessive force against people of color. Black lives matter; they have always mattered and will always mattered."

Spears reiterated that she and her peers not only stand for black lives, but they also stand with other P.O.Cs.

"We stand with native women who are constantly getting kidnapped and murdered. We stand with Hispanics at the border. We stand with Asian people being assaulted in the streets because of the coronavirus being known as the 'Chinese-virus.' We stand with all those people," Spears said.

University 2002 alumna, Olympia Vernon said since she saw the video of Floyd being murdered by Chauvin, she has had insomnia for five days since then.

"For the number of black men we've lost so far, the difference was that we watched George Floyd die slowly in front of us," Vernon said. "The video was clear; the intentions of the officer were clear. We literally felt like we were helpless watching him suffer that way."

Vernon believes all of the people of the country are tired from seeing "black and brown people suffer" and die, "just for being black and brown." She said, "What do you expect for people to do? How do people wait for justice and equality? How do we wait for [people] to understand that we need to be equal?"

By 2 p.m., Baton Rouge Mayor-President, Sharon Weston Broome made an appearance, starting the protest by thanking the attendees and by leading the event in a prayer.

"Here in Baton Rouge, we have worked with your help to move the needle," Broome said. "We still have work to do, but with your help, we can continue to do what we know to make the community equitable and inclusive and forthright."

Broome said she implores those attendees who would be working peacefully in the effort, preaching for people "to not take their eyes off of the prize, but in solidarity let us all work together for a community of peace, prosperity, and progress, no matter the color of your skin and no matter what your zip code is."

Olivia Johnston, an LSU Law alumna, said she joined the protest as a sign of solidarity.

"There's been so much silence and so much attempt at reform for over 400 years to me," Johnston said. "What we're seeing in our culture is just a movement. People are so willing to speak out against obvious racism but not willing to call it out when it is implicit. I think it's really important as a culture to call a spade a spade, especially white people who have been so quiet for so long and just letting other people carry this weight and carry this burden. It's time for everyone to just say enough is enough, no matter what the cost is. No more black deaths."

Early childhood education graduate student Autumn Smith said she was invited by her best friend and Baton Rouge native, Trinity Trum, to the protest. Both of the women felt by attending the protest, they are able to contribute to the Black Lives Matter movement.

"Sometimes it feels like there is not much you could do, but this is just one thing that we can do to make a difference," Smith said.

Trum said everyone is just tired, adding that things have to change.

"While it may not be someone I know or you know, it's somebody with probably my skin tone [who] created this system," Trum said. "It's our job to tear it down because it's not benefiting the people of the United States, and it's killing our people."

During the 0.8 mile walk to the Louisiana State Capitol building, protesters held their signs above their heads, chanting "no justice, no peace, no racist police," "black lives matter," "hands up, don't shoot," "George Floyd," "can't breathe," toward the state capitol.

Wearing a "LSU Prof. For Justice" sign over his clothing, University history professor Stephen Andes said he's been feeling overwhelmed by not only the coronavirus but also the "constant attack on black life."

Upon arriving to the capitol building, Hawkins, Spears and Temple took to the steps, had a moment of silence for victims of police brutality and spoke to hundreds of protesters.

Spears spoke, holding back tears as she said, "On May 25, 2020, a man was murdered in broad daylight, by somebody who claimed to protect and serve his community. His name was George Floyd, and we cannot let his name be forgotten." She then asked the attendees to raise their fists in solidarity.

The organizers then made a list of demands including: all officers involved in the murder of George Floyd be indited and prosecuted to the fullest extent of the law, all elected officials seeking office join them in a town hall to discuss their black agenda for the community, additional and dedicated funding be given to community centers and organizations to disenfranchised communities, Juneteenth be recognized as a state holiday, immediate action and reform be improved of the East Baton Rouge Parish prison, and more.

The students also promoted their website which includes the list of their demands and lists of black-owned businesses patrons can support. They also brought attention to the need for people to register to vote, and for more information on how to register to vote in Louisiana, click here.

By the end of the protests, attendees continued to chant as they walked back to their vehicles as East Baton Rouge Parish Police Department monitored.

"[The protest] is for a good cause. Everybody has a right to voice their opinion, and it was peaceful. That's how it's supposed to be," Cpl. T. Hall of EBRPD said. "My hat is tipped off to everybody that's out here for this matter."