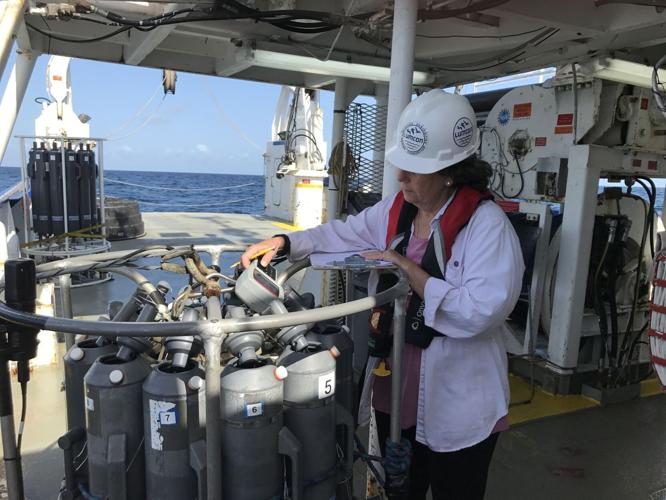 A map of the dead zone in late July 2019 made after the shelf-wide cruise measurements. The black line outlines the area of bottom-water hypoxia. Courtesy of Nancy Rabalais

The world’s second largest “dead zone” off the coast of Louisiana is three times larger than the goal size set in 2001.

An area noted as a “dead zone” is an area of water lacking oxygen to the point it cannot support living organisms. The lack of oxygen is called hypoxia. This phenomenon was first noticed in the ‘70s and has grown ever since. The issue is especially prevalent in the Gulf of Mexico.

Nancy Rabalais, an LSU professor in oceanography and coastal sciences, has studied this zone since measurements began in 1985.

“I’ve tried very hard to bring the public outreach to have the public know more about this,” Rabalais said. “It’s difficult because the main source is so far away.”

The Gulf of Mexico’s dead zone is the largest in the United States.

Nitrogen and phosphorus are key nutrients within soil that aid in the production of crops. When farmers fail to protect their soil, the soil and its nutrients are washed into the river.

When the nitrogen and phosphorus reach the gulf, a process begins that leads to the hypoxia issue. The nitrogen stimulates the growth of single cell plants called phytoplankton. This is a natural process, but because of the excess nitrogen, there is overproduction.

Without oxygen, the aquatic species living in this section die or move away; however, given the size of the dead zone in the Gulf of Mexico, many organisms would not be able to simply move away.

“The ecosystem is sick,” Rabalais said. “It’s not functioning the way it should with all the normal nitrogen phosphorus cycles, carbon cycle. It’s out of kilter with what it should be.”

This year’s estimate for the dead zone is over 5,000 square miles, or roughly the size of Connecticut. The estimate comes from the nitrogen levels within the Mississippi River during May. Rabalais said this single factor can account for more than 80% of the variability in the size of the dead zone during July.

The official measurement will occur during a shelf-wide cruise to take place between July and August. During the cruise, Rabalais and others will take samples from 80 to 90 places along the Louisiana and Texas coast.

They will measure for the oxygen levels at the bottom of the Gulf up to 2 parts per million. Anything more than that will not be considered within the dead zone. At these oxygen levels, species begin to die, so fishing for any bottom feeding species in the dead zone will yield next to nothing.

This is yet another hit to the already crippling fishing and shrimping economies in southern Louisiana. Rabalais said that shrimpers and fishers have to go farther out in order to catch. This drives costs up, and there are already much cheaper imported shrimp and fish on the market.

The measurement will likely be very close to the estimation as long as there is not a hurricane or tropical storm leading up to the cruise. A storm would mix up the water and oxygen levels between the top and bottom water layers. Rabalais said this is only a temporary solution, and the hypoxia will redevelop within five to 10 days.

In 2001, an action plan was created to offer solutions and goals in reducing the Gulf hypoxia issue. Twelve states are part of the task force. This plan has been updated several times, but since its creation, there has not been a significant reduction in the average dead zone size.

Lisa Fultz, a professor with the LSU College of Agriculture, explained that there are many ways that agricultural communities can reduce their nitrogen loading into the watershed.

Fultz said that LSU has a project supported by the Patrick F. Taylor Foundation that looks at best management practices. She outlined many different ways that farmers can mitigate nitrogen in the runoff, but said that not all recommendations will work in every situation.

One way farmers can make a positive impact is by reducing the amount of fertilizer used on their crops. By using less fertilizer there is less potential for nutrient runoff. This is also a better economical choice for farmers.

Fultz also recommended less tilling and the use of cover crops. Both keep nutrients where they belong. Although tilling is a common measure to increase contact between the seed and the soil, it buries coverage and residue that would otherwise protect the soil from runoff.

Cover crops are used during the fallow period, and they protect the soil and bring nutrients into the system. Common cover crops are crimson clover, winter pea, and hairy vetch. These crops are usually not harvested and farmers will need to buy the initial seed.

Fultz said that farmers may not see an immediate return on their yield, but these practices will not only contribute to lesser nitrogen loading but also a better soil health. She said that the first few seasons will be the field “resetting” itself.

Fultz said there are some governmental assistance programs for farmers pursuing these better practices. She said that another way to help farmers make these reforms is to provide them with the knowledge they need to get started.

Fossil fuel emissions will come down with rainfall into the water sources. Water waste treatments also contribute to the problem. Rabalais emphasized the importance of trying to minimize one’s own contribution to nitrogen levels.

Rabalais said that she avoids corn, a short-rooted plant, which does not absorb many nutrients from the soil, leaving them to be washed away into the Gulf. To reduce her dependency on corn, Rabalais only uses canola oil, reduces her meat consumption and only uses ethanol-free gas.

“Lifestyle changes can make an effect on our overconsumption of things,” Rabalais said.

Scattered thunderstorms in the morning becoming more widespread in the afternoon. High 89F. Winds SSW at 5 to 10 mph. Chance of rain 70%.