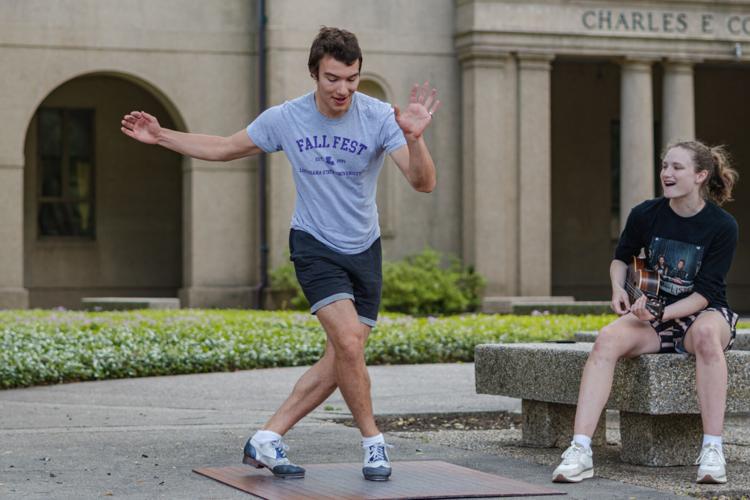 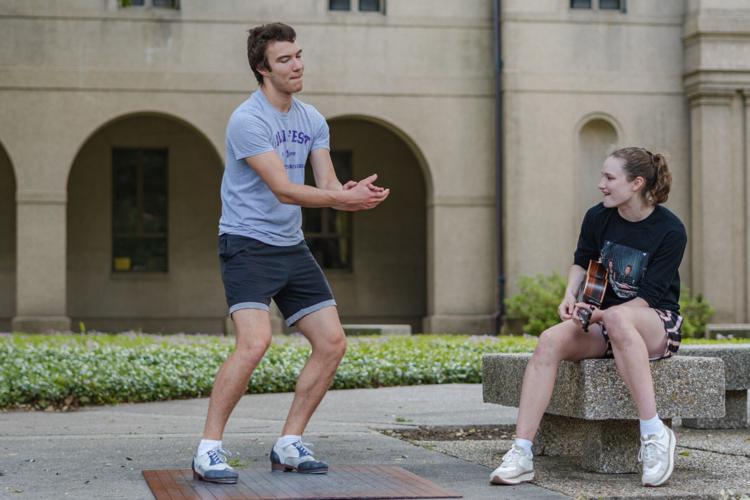 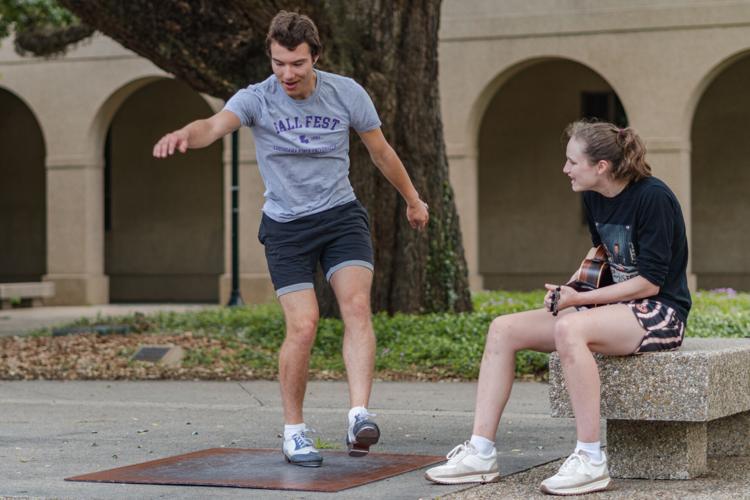 Under an oak tree at the south end of the Quad, Harry's tap shoes flashed as Jackie's ukulele rang out. She started to sing, "Don't worry, be happy."

Harry and Jackie are a duo of LSU students who have been dancing, singing and playing ukulele around campus for over a year.

Film and television sophomore Jackie Johnston started playing music when she was 12, playing percussion in her school band and performing in choir. But Johnston said what really got her into music was her interest in musical theater.

“My dad did theater," Johnston said. "So, it was just like the thing we did, and I loved it."

When Johnston was 15, she started to write her own songs.

“You can write songs all the time," Johnston said. "They’re just gonna be bad, you know? Like, they were bad when I was 15, and they get better. I always just liked to make up little songs when I was little. And so, when I learned an instrument, and I could put chords behind it, it was fun.”

Growing up in Canada, math sophomore Harrison Gietz practiced dancing for most of his life.

“My dance instructor at the time was like, 'Hey, you should go to this audition.' And I was like, 'There’s no way I’m gonna make an audition for the national level,'” Gietz said. “And then that summer, they accepted me… We trained for my gap year and then competed at worlds in Germany, which was really cool.”

Gietz said he came to LSU for the warm weather and a change of setting, but when it came to choosing this specific university, he was pretty spontaneous.

“Frankly, I think it was just luck, and [LSU] was just what I happened to come across,” Gietz said. “You know, happenstance.”

Johnston and Gietz met during their freshman year when they both lived in Laville Hall.

“Harrison told me that he did tap dancing and that he was ordering a board to do tap dancing," Johnston said. "He wanted someone to accompany him, maybe with some live music, while he did it. I was like, 'Oh, I play ukulele, and I’d love to do that. That sounds like so much fun.'”

Johnston and Gietz decided to just go out and perform to see what would happen.

“We didn’t know what we were getting into,” Gietz said. “…At first, we were kind of just like, 'Okay, let’s show up and see if we get attention.'”

Johnston recalled her feelings during their first performance.

“The first time, I think it was very scary to start singing and start doing it,” Johnston said. “Because it’s like, we’re so loud. Like, we’re very loud. You can’t really ignore us.”

Now, Johnston and Gietz say they try to play every Friday in Free Speech Alley, the Quad or anywhere people can see. The duo described what a normal jam session looks like for them.

“It depends on our mood,” Gietz said. “…We have a list of songs that we like, or Jackie plays some of her songs that she writes herself… we usually go for an hour and a half [or] two hours singing and tapping together.”

Gietz mostly improvises his tap dancing, while some of their most frequently performed songs have planned choreography, Johnston said.

“Sometimes I’ll just make up songs on the spot too," Johnston said. "Like [we] kind of both improvise, and it's just for fun."

Some of the duo’s influences include Lawrence, a soul-pop and funk group, Jason Mraz, and tap dancing legends Bill ‘Bojangles’ Robinson and John Bubbles.

Gietz and Johnston, who perform under the name Harry and Jackie, plan to take their act beyond campus soon. The duo wants to use TikTok and Instagram to spread their talent, but efforts to expand their influence have not always gone without resistance.

Johnston said the duo once got a police escort out of the mall while performing.

“This is funny because we were trying to be good people. This is right after the hurricane, and we were like, 'Oh, let’s raise money for the hurricane and ask for donations while we perform,'” Gietz said. “We got this one guy to give us 20 bucks, and we’re like, 'This is amazing.' And then security pulls up immediately.”

The pair also discussed what motivates them to come on campus and perform every week.

Johnston said the fun she has performing with Gietz motivates her.

“We have so much fun doing it," Johnston said. "Like, regardless of if we do it for people… I’m always like, 'Thank goodness for you, Harrison, that we could do this,' because it’s just so fun to sing and do music stuff,” Johnston said.

Gietz said spreading joy around campus and doing something they like motivates him.

“I think it’s really cool, you know, we found something that we really like,” Gietz said. “And then we just happened to do it and spread joy on campus because of it.”

Scattered thunderstorms, especially in the afternoon. High near 85F. Winds NE at 5 to 10 mph. Chance of rain 40%.

Some clouds and possibly an isolated thunderstorm after midnight. Low 69F. Winds light and variable. Chance of rain 30%.

Some clouds and possibly an isolated thunderstorm after midnight. Low 73F. Winds SSE at 10 to 15 mph. Chance of rain 30%.