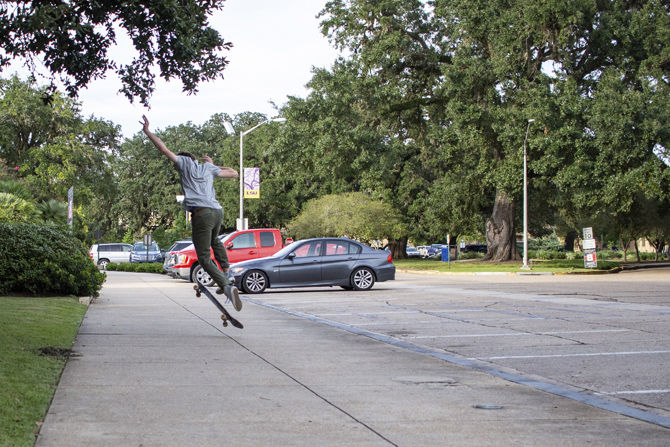 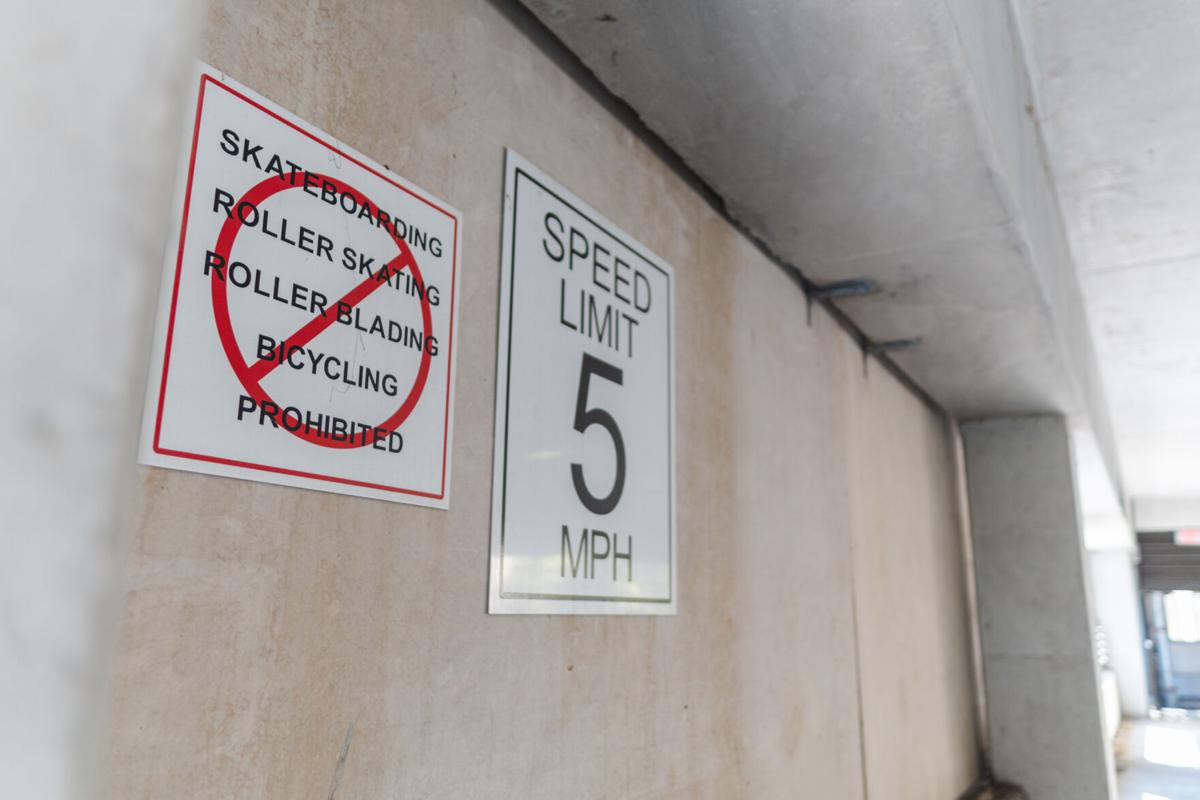 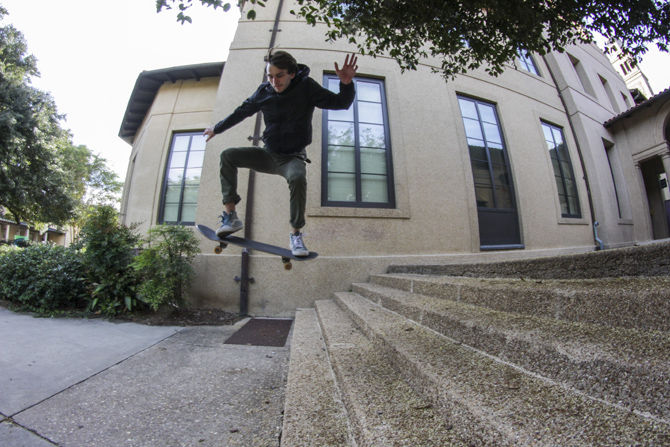 Thomas Buchmann preferred skateboarding over walking when navigating campus. He found it to be the easiest way to get between his classes and to blow off some steam.

His attitude towards skating has since shifted, however. Last year, the finance sophomore broke his leg while skating downhill behind the PMAC. He hasn't skateboarded since.

“There was a turn and I couldn’t see a car coming until I got near the bottom. So I went to get out of the way and hit a traffic arm while trying to avoid the car,” Buchmann said. “I was going really fast and that’s what broke my [tibia and fibula].”

He feels what happened to him could have been prevented if he was riding on the sidewalks instead of the road. But some of campus’s sidewalks are unsuitable for skaters trying to navigate campus, he said.

“The sidewalks and roads are [both] pretty messed up with twigs, a bunch of cracks and different things that make it hard to ride around campus,” Buchmann said.

Fixing the disrepair of campus’ paved areas, especially the sidewalks, is a major concern of Assistant President of Campus Planning Dennis Mitchell as he works to make campus safer and more accessible to various modes of transportation so that to prevent other injuries like Buchmann’s.

“Every day we are repairing trip hazards and identifying issues in terms of how to make our sidewalks without any changes in elevation so that it’s smooth,” Mitchell said.

The state of campus sidewalks is such that skaters like Buchmann and his friends had no choice but to go into the road and contend with traffic through and around campus.

Mitchell said his team at Campus Planning has begun to make changes to the infrastructure of campus to make it as accommodating as possible to skaters.

One of Mitchell’s main goal in making campus more accessible is to eliminate on-street parking entirely and to introduce bike lanes. He said that these efforts are done to “open up the line of sight” for students using the streets and sidewalks.

“The biggest danger that we have is when someone on a skateboard comes up to a crosswalk at a high speed, cars can’t see them. So we want to eliminate the cars [parked] on the road and certainly want people using skateboards to be mindful of crosswalks and be careful,” Mitchell said.

The bike lanes, Mitchell said, would allow campus to be shared by more students than before.

The changes he has been pushing for also include improving the accessibility of sidewalks, installing more ramps and partnering with student government to install skateboard locking racks.

Some skaters have found that campus is already well suited to their lifestyle with the changes Mitchell is beginning to implement.

Despite owning a car, architecture freshman Skylar Vollmer finds using her leaf-shaped green longboard to be a much more efficient mode of transportation.

“There’s a whole lot of stops in my car and with pedestrians around, you just end up getting places faster on a skateboard,” Vollmer said.

After skating since the sixth grade in her home state of Virginia, Vollmer said that when she skateboards, it feels like a smoother ride than a bike or a scooter while allowing her to get out of the heat faster.

“It feels really cool to skateboard down LSU campus with the big buildings going by,” she said. “You feel like a movie star.”

Computer science freshman Andrew Nguyen feels skating is really helpful in his commute to class. After a period of not skating following high school, one week into school Nguyen picked it up again after he noticed how long it would take him to get across campus.

He said a 20-minute walk is cut down to about seven minutes if he’s on his skateboard.

Skaters like Vollmer and Nguyen have to contend with pedestrians if they want to use the sidewalks. Sometimes this can be a hinderance to their own mobility, the freshmen skaters said.

“When it’s a time where everyone’s out and about, I can’t really skateboard. I really don’t want to run into people,” Nguyen said.

Nguyen said that it’s rare if he crosses someone’s path on his board, but when it does happen, he has had nothing but positive experiences.

“I don’t know if I’ve been lucky but everybody’s really nice about it,” Nguyen said.

Vollmer’s experience has not been as positive. She said people tend to be a little bit more rude to people using alternative forms of transportation like bikes and boards.

“I don’t see why they get so upset when you’re coming up behind them,” she said. “When a skateboarders coming at you they can always bail.”

The main difficulty Vollmer has had while skating was trying to get to Tiger Band Hall, whose sidewalks are “sometimes too bad” to skate on, Vollmer said. She feels that the renovation of old sidewalks that Mitchell has begun is essential to improve the quality of life for skaters on campus.

Describing himself as a “champion of mobility,” Mitchell said he is fine with skaters using their boards to get around campus but the problems start to arise when they use their boards to perform “dangerous stunts” in busy areas on campus.

Buchmann pushes back against this notion, feeling that the university needs to allow skaters to use spots like low-traffic areas and parking garages, home to infamous “no skateboarding” signs, to practice stunts and have free reign in their skating.

“I don’t see why it’s a problem for us to be skating there,” Buchmann said. “We’re out of the way of people walking to class just practicing on flat ground. We’re not messing anything up.”

Mostly cloudy skies early, then partly cloudy in the afternoon. A stray shower or thunderstorm is possible. High around 85F. Winds light and variable.

A few clouds from time to time. Low 63F. Winds light and variable.