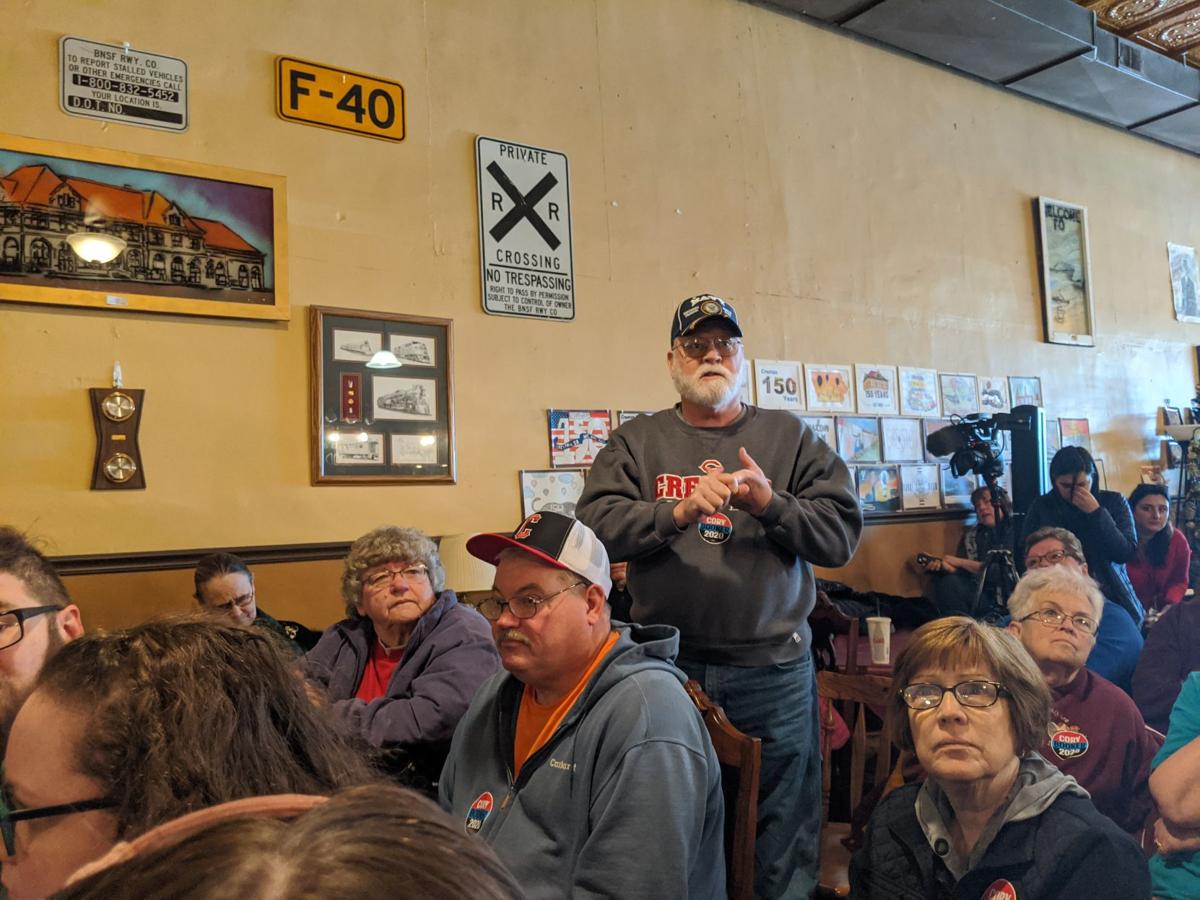 Tom Hawks, an Iowan retiree and navy veteran, stands up to ask a question to Cory Booker during his rally at Adam’s Street Espresso Cafe in Creston, Iowa on Jan. 1, 2020. 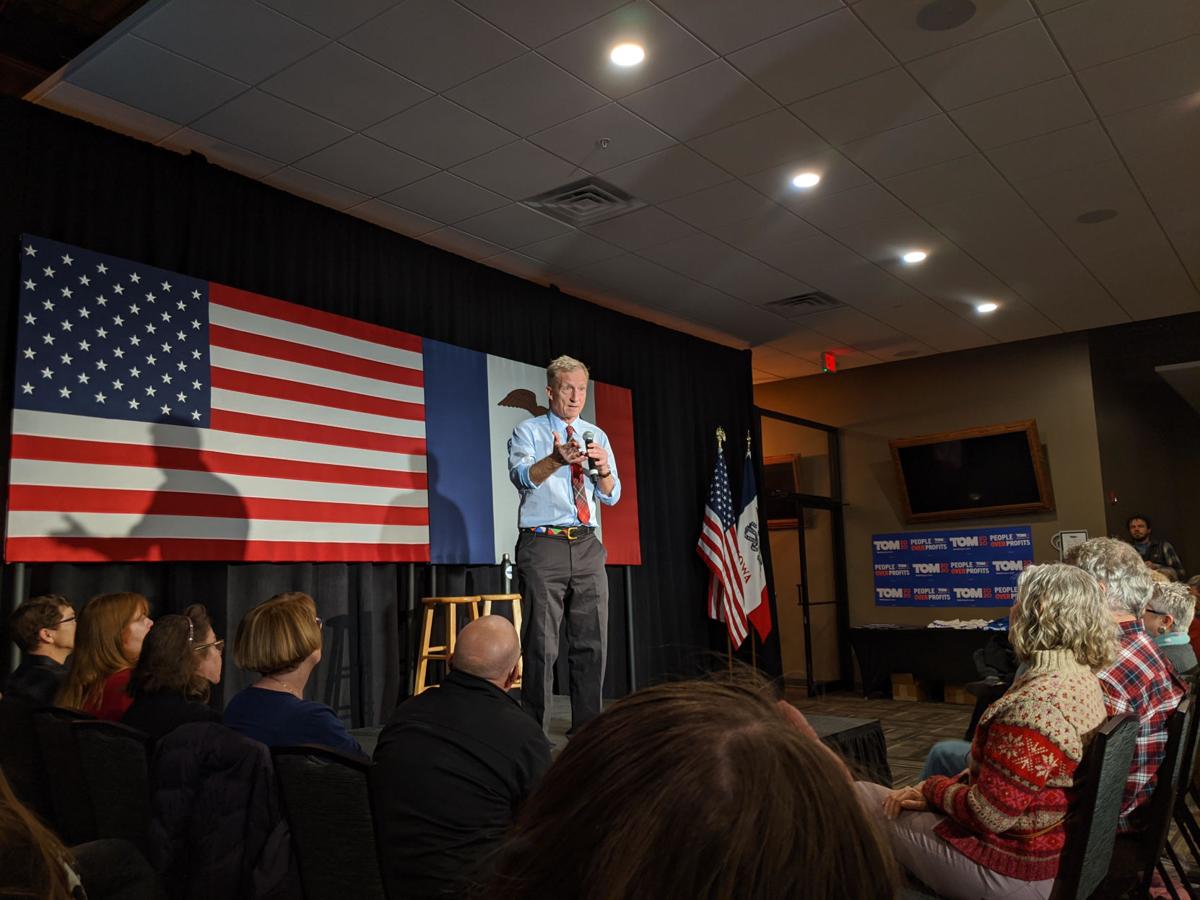 Tom Steyer speaks to attendees during a rally at The Gathering Room in Council Bluffs, Iowa on Jan. 1, 2020.

Tom Hawks, an Iowan retiree and navy veteran, stands up to ask a question to Cory Booker during his rally at Adam’s Street Espresso Cafe in Creston, Iowa on Jan. 1, 2020.

Tom Steyer speaks to attendees during a rally at The Gathering Room in Council Bluffs, Iowa on Jan. 1, 2020.

Over 25 LSU students traveled across the state of Iowa over the winter intersession to participate in the Manship School of Mass Communication’s Iowa of the Tiger Program.

This is the fourth year that the program has occurred, and LSU is one of only two schools in the nation with an Iowa caucus program.

The program brings students to Iowa to witness the state’s unique political process leading up to the Iowa caucus. Students on the trip also had the opportunity to report for the Manship News Service which sends student stories to media outlets across the state.

Students traveled across over 900 miles of snow, fields and windmills from Dec. 29 to Jan. 7 chasing candidates in all corners of the state.

Despite colder temperatures and blustery winds rolling across the prairies and pastures outside, Woodrow Wilson Middle School’s gymnasium was suffocatingly stuffy.

Within hours of arrival in Iowa, some University students embarked on a two-hour drive to Council Bluffs, Iowa for Sen. Elizabeth Warren’s town hall meeting at Woodrow Wilson Middle School.

The 70-year old, Oklahoma-born Massachusetts senator ran in from the gym doors behind the crowd of curious caucus attendees pumping her fist to kick off the event.

Warren began by detailing her background as a special needs educator and a Harvard Law professor before shifting to her presidential aspirations.

“We need big ideas to match the big problems of our time,” Warren told the crowd.

Warren ended the town hall with her famous “selfie line.” A line wrapped around the basketball court leading up to Warren’s stage. For the University students attending the event, a Warren selfie and handshake was a welcome into a world unlike anything else in American politics.

Another group of students attended an event for Sen. Bernie Sanders in Clive, a suburb west of Des Moines the same day. The event was conducted in Spanish with a band and speeches about immigration.

The mayor expressed a focus of unity in his message while describing his plans for the presidency and his campaign.

Students reporting for the Manship News Service went to a Sanders press conference which was cancelled without an email explanation. After some phone calls, three students were invited to follow the Vermont senator as he knocked on doors in a neighborhood north of downtown Des Moines.

The Sanders team encouraged attendees to commit to caucus for Sanders. Commit-to-caucus and volunteer forms were brought around all night.

Sanders arrived after two bands and speakers introduced him, and stayed for around 20 minutes. The Vermont senator’s speech focused on what he hopes to achieve in 2020. After his speech he briefly waded through the crowd, shaking hands and taking selfies with reporters.

Java Joe’s, a coffee shop in downtown Des Moines which plays host to MSNBC’s “Morning Joe” during the caucus, was filled with LSU students listening to Washington Post journalist Robert Costa detail his career and give advice.

Talking with Costa was followed by miles of windmill-dotted farms and countryside as the group headed to Creston for a Sen. Cory Booker event. The New Jersey senator packed a small coffee shop, fielding questions from the crowd, reiterating his experience and focusing on his message of love and unity.

“If America hasn’t broken your heart, you don’t love her enough,” Booker said.

Booker ended with selfies, handshakes and even a “Geaux Tigers.” New Year’s Day concluded with another trip to Council Bluffs, this time for a Tom Steyer town hall.

After many conversations about the caucus and the unique way Iowans regard the presidential race, the group drove to Ankeny to hear Minnesota Sen. Amy Klobuchar interviewed by David Yepsen.

The interview was held in the small auditorium of an Iowa community college, and LSU students made up more than half of the attendees. Yepsen fired many rounds of questions at Klobuchar about her policies and plans for the presidency. The night ended with a group selfie and another “Geaux Tigers.”

Students caravanned to a coffee shop in Perry for an Andrew Yang town hall that evening. Snow began to fall as students waited on the sidewalk for admittance. Inside, the small coffee shop was filled with members of the “Yang Gang,” curious locals and cold LSU students.

The entrepreneur railed against Amazon for paying no corporate taxes and decades of politicians for allowing the U.S. to fall behind China in the tech race. Yang also touted his plan for universal basic income.

“We have confused economic value with human value in this country,” Yang said.

The event ended with pictures, signed books, a “Geaux Tigers” from Yang, and an LSU student snowball fight back at the hotel.

Compared to other days on the trip, the seventh day was largely open. Many students used the free time to canvas for Sen. Cory Booker, write stories for the Manship News Service or recover from a cold.

Former Vice President Joe Biden capped off the sleepy Saturday. The LSU group headed to McKinley Elementary School in Des Moines, where students had the opportunity to meet Biden. After being shuffled into a classroom to meet the former vice president, students waited over 90 minutes for Biden. Political communications professor Bob Mann used the wait to read the children’s book “Pete the Cat” to the group.

Biden showed and posed for pictures with the students, before giving a “Geaux Tigers.”

The group split up on day eight to experience different parts of Iowa. One group stayed in Des Moines and attended a panel discussion of political scientists about the Iowa caucus and current race. Another group traveled to Davenport to attend a rally for Sen. Elizabeth Warren and another Biden event.

The Iowa of the Tiger trip concluded with a morning tour of the Des Moines Register office downtown. Students saw part of the newsroom and sat in on the morning editorial meeting for an inside look on how the Iowa newspaper covers the caucus every four years.