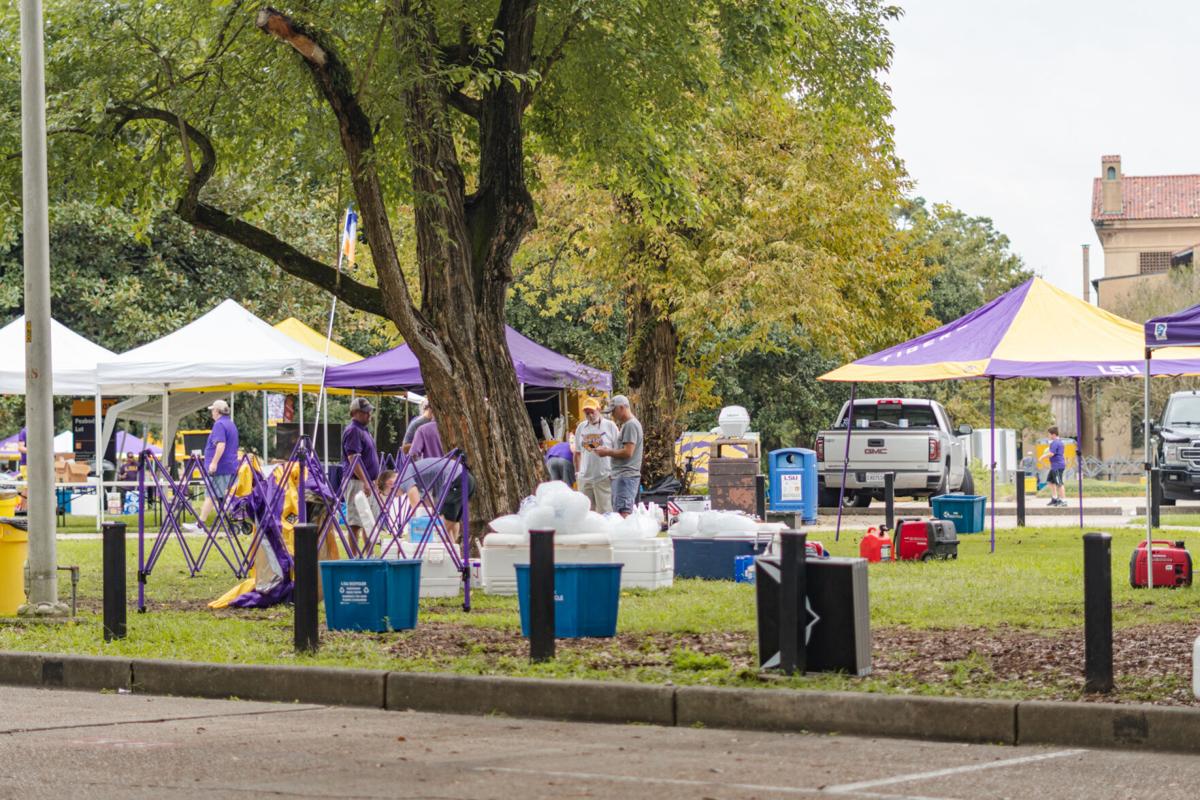 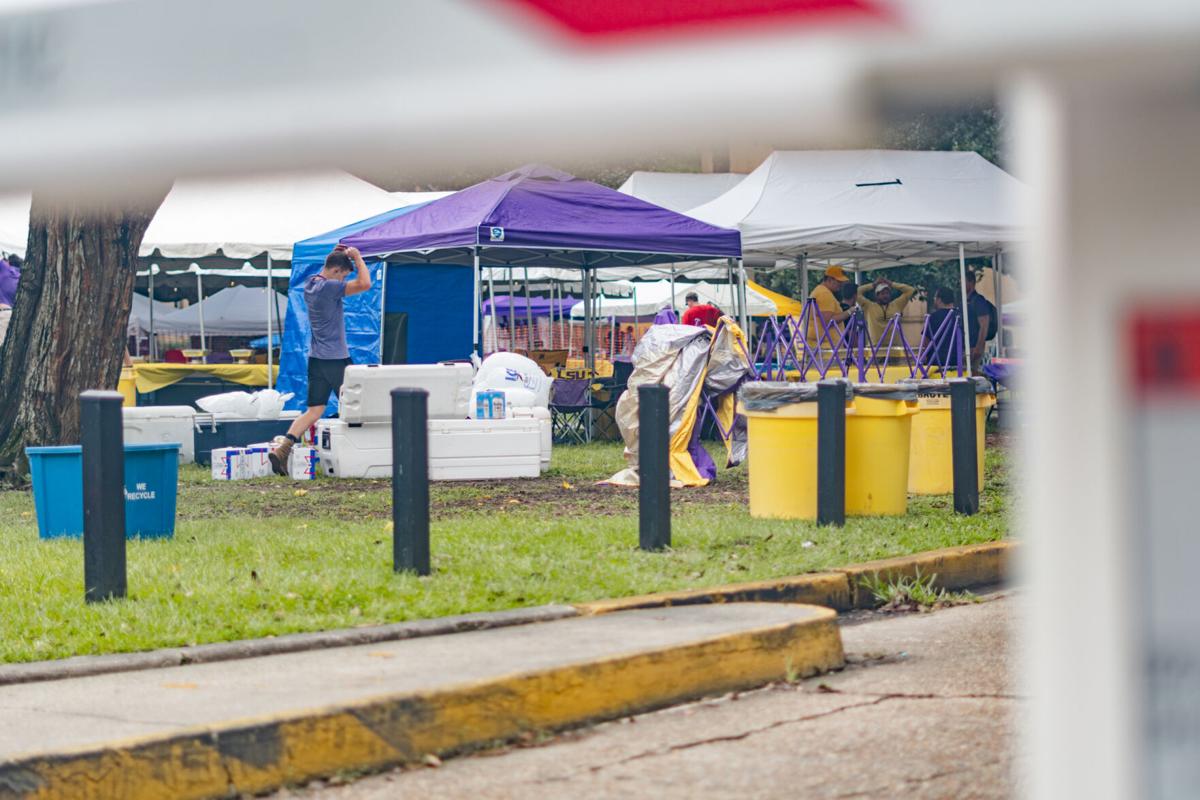 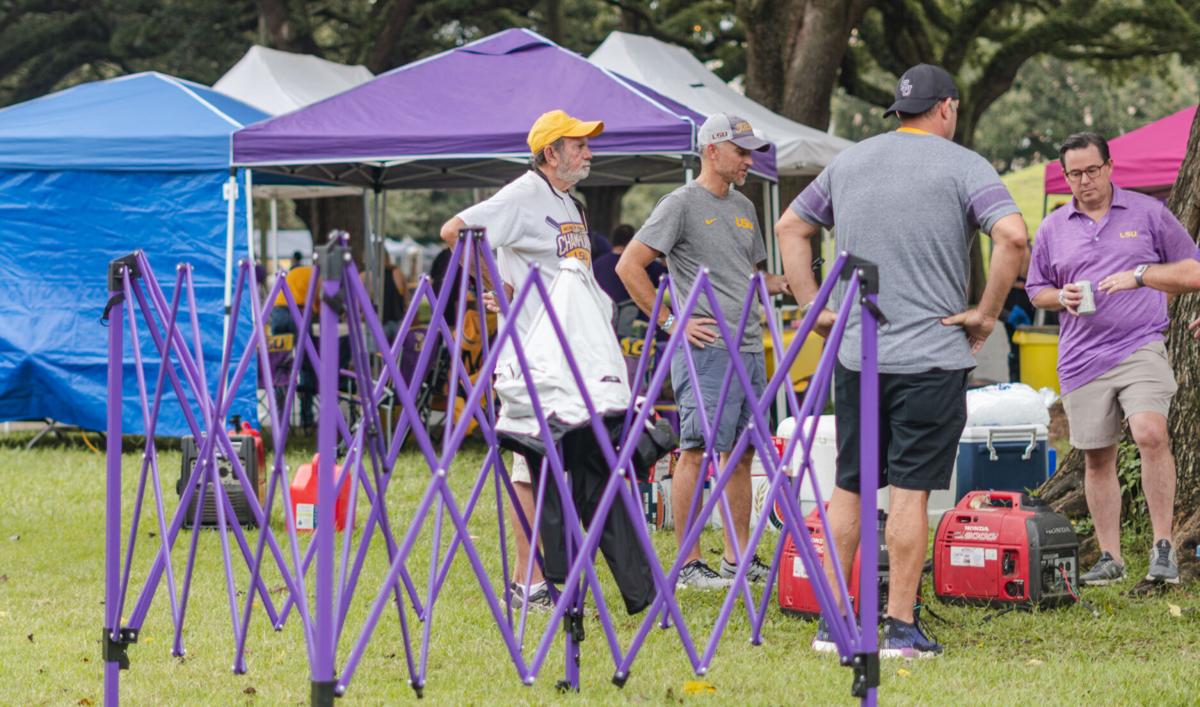 College football fans gathered on a dreary campus day to tailgate the highly anticipated LSU vs. Auburn football game. Muddy shoes and wet skies did not deter the fans from celebrating what they love most: LSU football.

At the parade grounds, students constructed mini-dance venues with DJ setups, speakers and tents. Mosh pits turned into mud pits. Tailgaters either joyously hobbled in mud-plastered sneakers or hopped around barefoot in the dirt.

Business analytics graduate Maggie Williams had a solution not only efficient in avoiding the Parade Ground mud trenches, but filled with southern pride. She wore her cowgirl boots.

“The rain is kind of making it fun because it’s all muddy and everyone is just like ‘why not?’” Williams said.

Sports Administration junior Caleb Westfall said he didn’t mind the weather either. As long as he had his buddies and a game of corn hole set up, he was content.

“When you’re with the right people, all of that stuff doesn’t matter," Westfall said. "Everyone comes out to watch the Tigers play, and it’s fun.”

Beside the Pentagon Community, Shelley Taylor, a 1996 alumna of Auburn University wore her school colors and came to root for her team. Her orange and blue stuck out in a sea of purple and yellow, especially protruding behind her LSU friends whom she came with.

"They have welcomed us here even though we are the enemy, but we are friends and so happy to be here,” Shelley said. “It’s been a great day.”

For the past 20 years, Shelley and her husband have watched their team lose on LSU turf. They believed it was time to claim their victory. In a true Louisiana fashion, they planned to hunker down under their tent if the rain tested them.

Mario Bogran, a proud father to two LSU alumni, loves college football. On Saturday, Oct. 2 he arrived to campus at 6 a.m. to beat the hectic gameday parking and to continue his tailgating tradition of cooking an early-morning breakfast on his grill. The rain didn't deter him.

“We still do the same thing,” Bogran said in response to the weather. “We stick it out. It never rains in death valley.”

Ashley Frugé and her tailgating group also brought their Louisiana culture to the scene by carrying their hurricane generators to power not only fans fighting the October heat, but TVs showcasing the big game.

Frugé was joined by her coworkers from a local news station. She said tailgating with them every year has made them more than just coworkers. To Frugé, they've become family.

"The comradery of everybody – it’s just a joyous occasion,” Frugé said. “We all have fun and we connect with one another.”

Over the years, Frugé and her friends believe they've earned their distinguished tailgating spot, complete with an awning blocking the rain and a bathroom close by.

Jared Mullen has extensive experience in the tailgating scene. With friends from several surrounding universities, he came to the conclusion that LSU’s football experience is like no other.

“LSU by far is the most unique and amazing experience you will ever have in your life,” Mullen said. “If you go to any other tailgate like ULL and Northwestern, or ULM, you will never have and experience like LSU.”

Morning clouds will give way to sunshine for the afternoon. High 54F. Winds NNW at 10 to 20 mph.