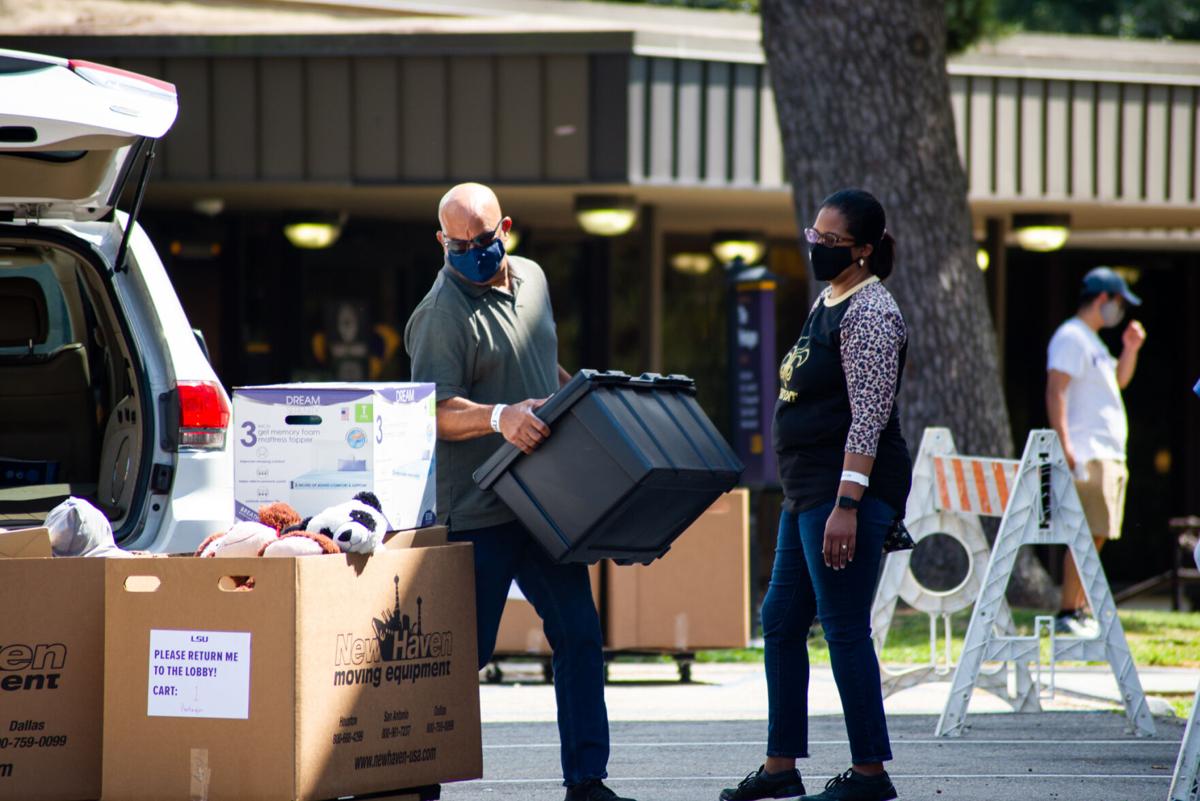 LSU parents help move in on Monday, Aug. 17, 2020 at the Pentagon Community on Dalrymple Dr. 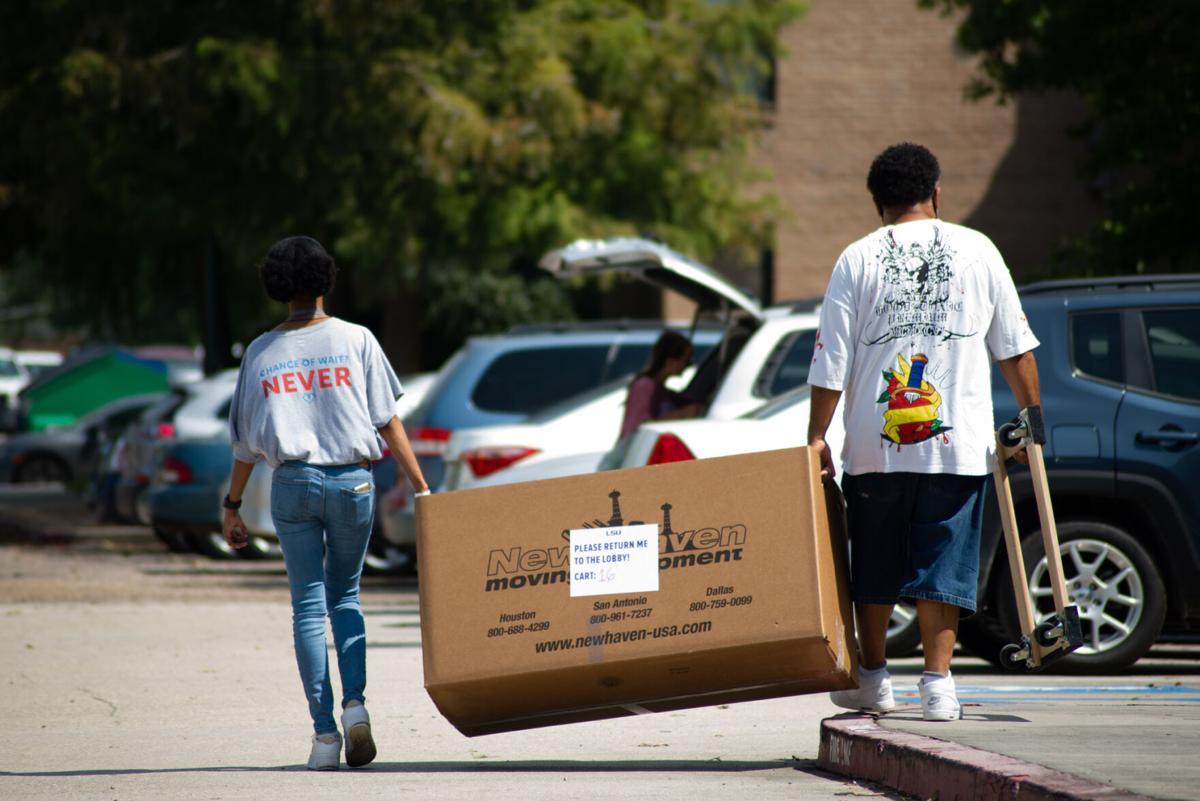 LSU students move in on Monday, Aug. 17, 2020 at the West Campus Apartments on LSU's campus. 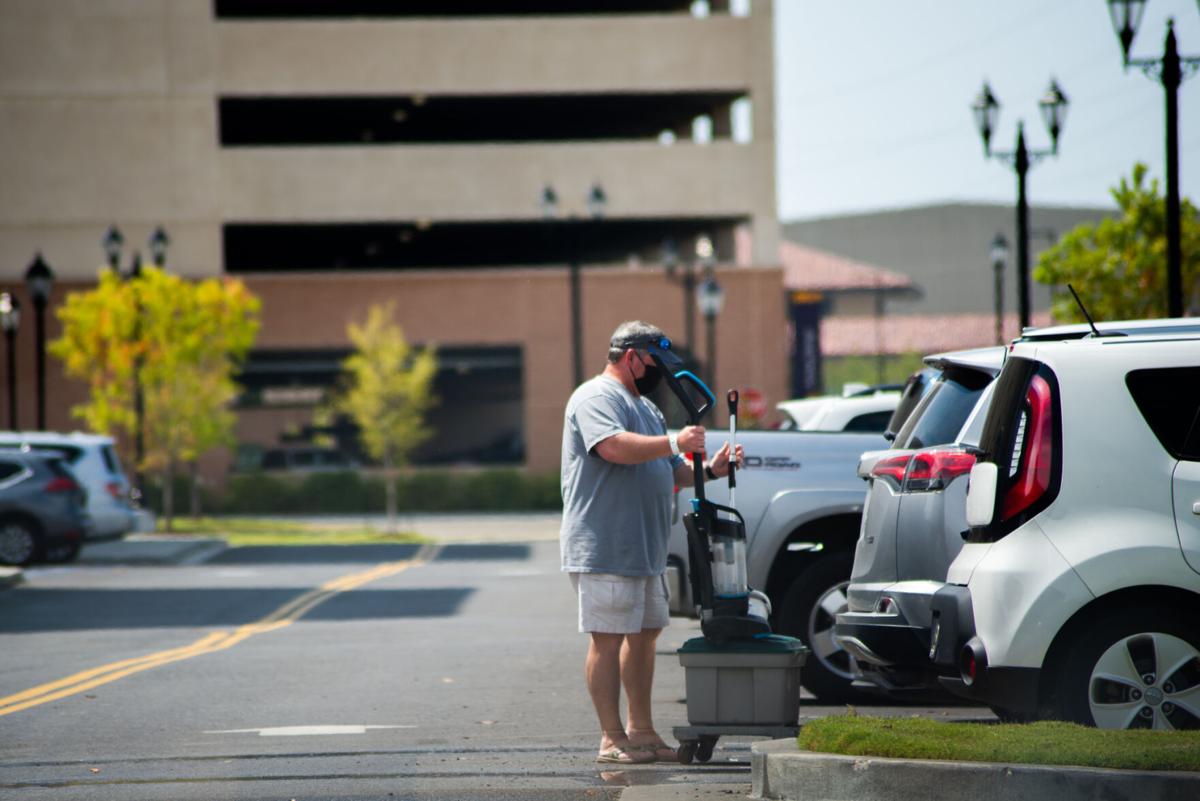 An LSU parent helps move in on Monday, Aug. 17, 2020 at the Nicholson Gateway Apartments on Nicholson Dr.

LSU parents help move in on Monday, Aug. 17, 2020 at the Pentagon Community on Dalrymple Dr.

LSU students move in on Monday, Aug. 17, 2020 at the West Campus Apartments on LSU's campus.

An LSU parent helps move in on Monday, Aug. 17, 2020 at the Nicholson Gateway Apartments on Nicholson Dr.

The University started the fall semester Tuesday, Aug. 25, and is expected to break last year’s record number of freshmen. University alumna and former residential assistant for the University, Kate Roy, thinks that LSU Residential Life is unable to handle that many students properly without overworking their RAs.

“The University doesn’t have the facilities to take care of 7,000 freshmen,” Roy said. “Maybe in five years when those new dorms on the east side of campus go up.”

Roy was an RA in Kirby Smith Hall from 2018-2019, and she expressed concern for the current RAs who have the usual workload but now also have the added responsibilities of maintaining rules and procedures implemented to keep residents safe from COVID-19.

“The RAs this year have to do so much more than when I was an RA,” Roy said. “It’s insane because of how much the workload already was.”

Both Roy and another former RA, who only spoke to the Reveille on the condition of anonymity, agreed that Res Life doesn’t adequately detail how tolling an RA's job is in the hiring process. RAs are paid for 20 hours of work a week, according to the former RA, and they are told that some weeks they will work more than 20 hours and some weeks they will work less than 20 hours.

“I can’t think of a single week where I worked less than 20 hours," the former RA said. “I’ve told supervisors I’m off the clock and been told that the last time they checked, an RA is always supposed to be there to help their residents.”

RAs are expected to prioritize their RA responsibilities over everything besides their school work and should limit their involvement with clubs and organizations to fulfill their responsibilities, according to the Resident Assistant Employment Agreement. All extracurricular activities are subject to approval by a supervisor. First-semester RAs are prohibited from having any outside employment.

Each RA is expected to create a board for their residence hall every month that displays information that students could find helpful. RAs are also responsible for connecting with their residents and writing “journal entries” about how their residents are doing.

Another RA, who also spoke to the Reveille on the condition of anonymity, details how when he worked at the Edward Gay Apartments, they started accepting packages for residents, which is against Res Life policy.

“We stopped doing it after we got complaints, but they told us they don’t want us to ever admit we did anything like that,” he said. “I got in trouble a week later for explaining to a resident that we stopped accepting packages.”

While Roy was an RA at Kirby Smith Hall, she believes that black residents were not given the same attention as white residents by her boss, and expressed the concern that her boss was not treating students equally when she was being interviewed by supervisors to be rehired.

Roy was not rehired the following semester, even though in her time at Kirby she had been nominated for RA of the month on four different occasions. When questioned as to why, her boss told Roy she isn’t comfortable giving her the reason why she wasn’t rehired.

“I put myself and other RAs I knew in a group chat and said, ‘here’s what is happening, and I’m going to the Reveille about this, and, if you don’t want the risk of losing your job, leave now,’” Roy said. “They all left within five minutes.”

RAs are allowed to talk to reporters, according to Assistant Vice President for Residential Life Steve Waller, they are just not allowed to represent the organization.

“There is no prohibition on them speaking as individuals,” Waller said.

An Advocate article published Aug. 11 stated that RAs are forbidden from speaking to the media, “particularly the on-campus newspaper.” RAs were told not to inform the media and fellow students if their charges tested positive for COVID-19. Three students out of around 250 RAs quit because they were concerned with how Res Life was handling COVID-19, according to the article.

The official RA media policy states that the executive director and/or associate director of communications & development are the official spokespersons for the department, and all media requests should be directed to them in crisis situations. This includes student organizations such as TigerTV, KLSU and the Reveille as well as full-time media professionals.

The policy allows RAs to speak to the media in non-emergency situations but encourages them to use discretion.

Regardless of the emergency status of the situation, RAs are required to inform the executive director or associate director of communications & development after speaking to any reporter.

Not returning for another year as an RA isn’t uncommon, with Res Life retaining 40-50% of its employees, according to the Director of Residential Life & Education Bill Mattera. This year there will be 248 RAs on campus to handle the incoming freshman class.

Any RA that decides to quit their job will have to pay the housing contract cancellation fee, which, depending on the date it’s submitted, can range from $250 to thousands. This fee prevents some RAs that are overwhelmed with the workload from quitting their job.

“That’s why people go through with it at the end of the day — the free housing,” Roy said. “If you try to quit and live off campus you have to pay them $4,000 just to break the housing contract.”

Mattera stated that RAs who are terminated from the position do not have to pay the cancellation fee, a loophole that some students have taken the opportunity to exploit.

“There is literally a culture of people who will try to get themselves fired,” Roy said. “I know of an RA who just let somebody without a Tiger Card into a room just so they would get fired.”

When asked if he has ever been aware of an RA deliberately getting themselves fired, Waller said he was not.

“My best friend got fired on purpose, actually,” a former RA said. “He told his bosses he wasn’t going to show up for anymore shifts so [they could fire him whenever they wanted]. He was not going to quit and pay the cancellation fees.”

Providing access to spaces without authorization is one of the offenses that results in immediate termination, according to the 2020/2021 RA Manual. Other such offenses include involvement with a discrimination incident, sexual misconduct, intoxication while in public or working in an official capacity, consuming alcohol while underage or with community residents, illegal drug use and breach of confidentiality. A breach of confidentiality includes releasing sensitive information to the media or allowing the media to access areas beyond the residential halls’ public spaces.

Roy believes that since the University implemented its first-year housing expectation in 2018, it has allowed ResLife to not be truly concerned with its reputation because freshmen have no choice but to live on campus.

“It’s a University-mandated monopoly,” Roy said. “It won’t affect their business model if they have a bad reputation because you are now required to live on campus.”

A mix of clouds and sun. High around 80F. Winds light and variable.

Scattered thunderstorms in the evening with a few showers possible late. Low around 60F. Winds NNW at 10 to 15 mph. Chance of rain 40%.