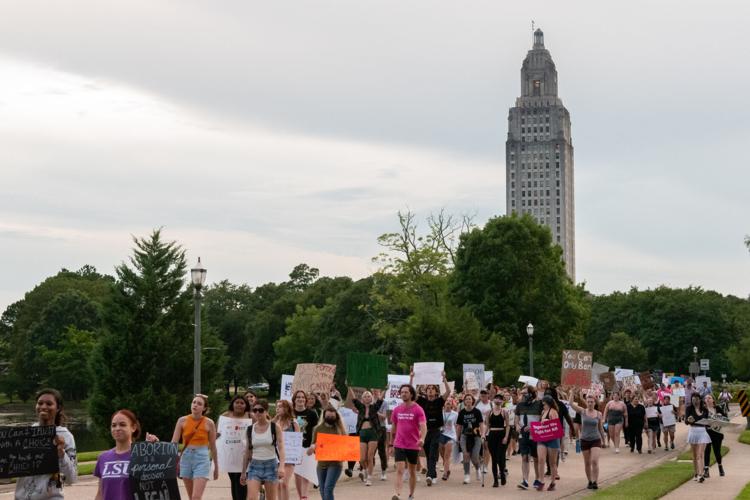 Protestors marched from the capitol to the governor's mansion, Thursday, June 30. 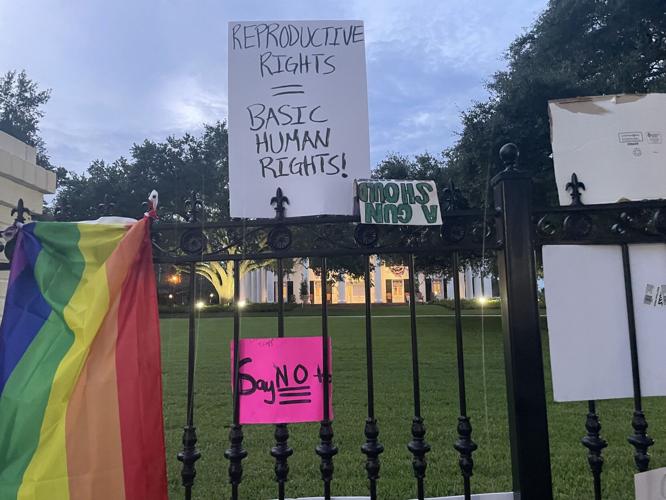 Abortion-rights protestors left their signs on the gate of the Louisiana governor's mansion on June 30, 2022 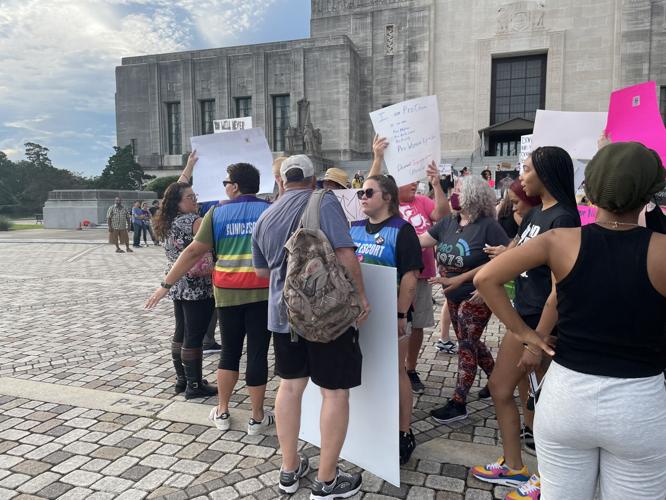 Crowds of protesters took to the steps of the Louisiana State Capitol and the governor’s mansion Thursday night to protest the overturning of Roe v. Wade, which immediately triggered a near-total abortion ban in Louisiana.

Gov. Edwards recently signed into law an act that increased the maximum penalties for performing an abortion to 10 years in prison and $100,000 fine. Penalties for late-term abortions are even greater

Louisiana does not have any exceptions for rape and incest, only in cases in which the pregnant person’s life is in danger or if the fetus has a condition incompatible with life outside the womb.

Thursday’s protest was originally a planned event with backing from nonprofits and the promise of police protection.

AnneMarie Olson and Josie Beekman, two LSU students, had never met before this event. Olson, an international studies senior, posted on Facebook that she was looking for any planned protests in Baton Rouge in the days following the Supreme Court’s decision. Beekman, a junior in music education, reached out to Olson and the two decided to organize their own.

They started planning the event together with Olson handling permits and sponsors while Beekman managed the Facebook group and outreach. They started a Facebook page, Louisiana Pro Choice Protest, and it grew quickly. The page now has over 1,000 members.

This rapid growth meant they would need permits and insurance. This proved to be a challenging task for two college students new to organizing a protest.

Olson said that by the time she knew permits and insurance would be needed, there wasn’t enough time to get them, and efforts to expedite the process fell through. Olson decided to cancel the protest after she was told that without the proper papers, she could be held liable for anything that took place at the event.

Despite the official event being canceled, organizers still encouraged individuals to go on their own, and many did. Shortly after 6:30, the steps of the state Capitol building were filled with abortion-rights protesters and signs. Three anti-abortion protesters stood opposite the Capitol and the other protesters.

Before long, some of the abortion-rights protesters got into arguments with the anti-abortion protesters. These confrontations were mitigated by clinic escorts that attended the event to keep the peace.

Casey Carr volunteers at the Delta Clinic of Baton Rouge, one of the state’s three abortion clinics, as a clinic escort. She came out to help manage the crowd. During the event, she helped de-escalate many situations between the two sets of protesters.

“While I don’t think what they’re doing is right, I believe that everyone deserves empathy,” Carr said.

The crowd of protesters repeated several chants throughout the night. Some of the chants were "My body, my choice"; "Post-Roe, hell no"; “Keep abortion safe and legal, it’s their choice not other people’s”; “Pro-life is a lie, they don’t care if people die” and "Use your voice, demand a choice."

In between chants, several women stepped forward to tell their stories and speak their minds. As they each stood before the crowd circling around them, they were engulfed with cheers and applause for being brave enough to tell their story. Stories of lifesaving abortion, medical complications and even biblical testimony were heard in support of the abortion-rights cause.

Mikiyah Parker stood before the crowd and spoke of her experience. She had been raped by her boyfriend. Parker did not want to have a child and learned that the pregnancy could have killed her. She chose to have an abortion, but worried that she may not have the option under current Louisiana Law.

Many abortion-rights advocates have expressed the worry that the criminal penalties for abortion may discourage doctor’s from providing abortions even in cases where it is technically legal.

Offended by what the anti-abortion protesters were saying, she commented on her own religious beliefs in regards to bodily autonomy.

Parker was not the only speaker to bring up religion. Another speaker quoted different parts of the bible that counteracted the “thou shall not kill” mantra being voiced by the other side.

Jamie Phelps, an LSU Ph.D. student in biological science, attended the event to help with crowd control. Phelps is Jewish, and she said that the abortion bans go directly against her religion and push a white-Chrisitan nationalist ideology.

“You say it’s for your religion, but what about my religion?” Phelps said. “You’re violating my religious rights.”

As the sun began to set, the crowd marched down to the governor’s mansion, a half mile walk away, to protest at his gate. During the walk, the protesters filled the streets and screamed their chants. Once they arrived, they filled the driveway, crowded the fence, and continued on with their chants.

Police blocked the ends of the road to stop cars from traveling down. The protesters stayed for almost half an hour.

Before leaving, the original organizers gave their final remarks. They thanked the protesters for coming out to support and begged them not to give up.

The protesters left their signs intertwined in the governor’s fence before leaving, but the signs were removed within minutes of protestors leaving.

Jeramesha Warner, another clinic escort at the event, said that the anti-abortion side is not as big as some think in Louisiana.

“I think there’s a misconception that the majority of the state is for what they’re pushing,” Warner said. “And that’s not the reality. You have a bunch of people who believe that there is something called bodily autonomy.”

Directors of Baton Rouge For the People, who also spoke during the protest, Xy and Kee, described the event as beautiful and personal. They said they were thankful that other organizers were stepping up.

“You know, it can't be the same groups every time, it has to be other people coming out and we all have to uplift each other and work together to get our messages out,” Kee said.

Baton Rouge For the People is an activist organization established after the killing of George Floyd by police in 2020. The group focuses mainly on advocacy and amplifying youth voices in Baton Rouge.

If you need help due to a disability in accessing this content, please email the LSU Office of Student Media at lmetcalf1@lsu.edu.

Partly cloudy with afternoon showers or thunderstorms. High near 90F. Winds E at 5 to 10 mph. Chance of rain 50%.

A few clouds from time to time. Low 72F. Winds light and variable.