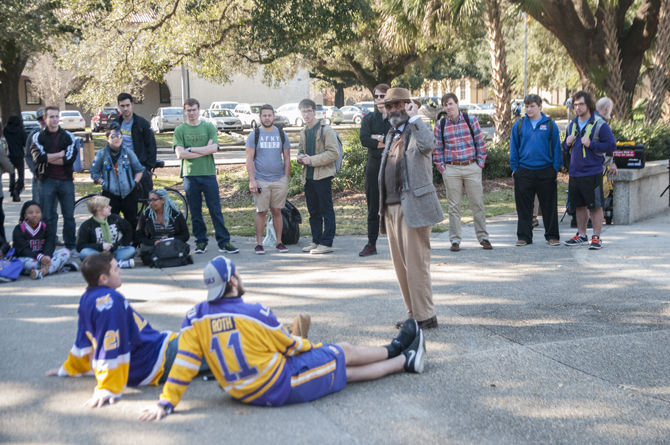 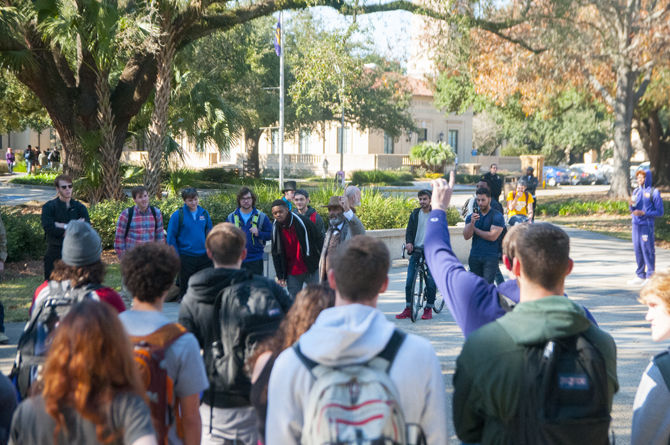 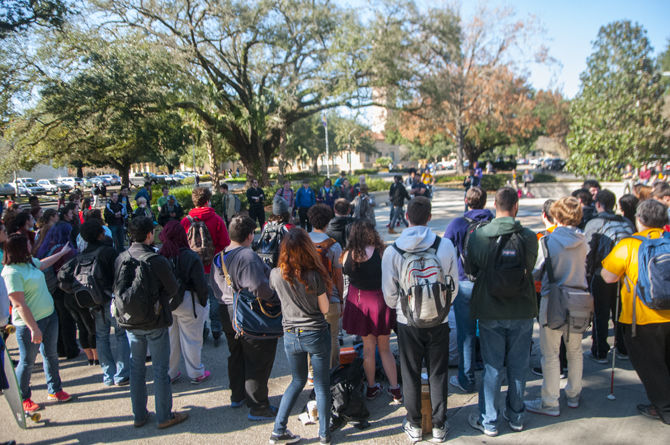 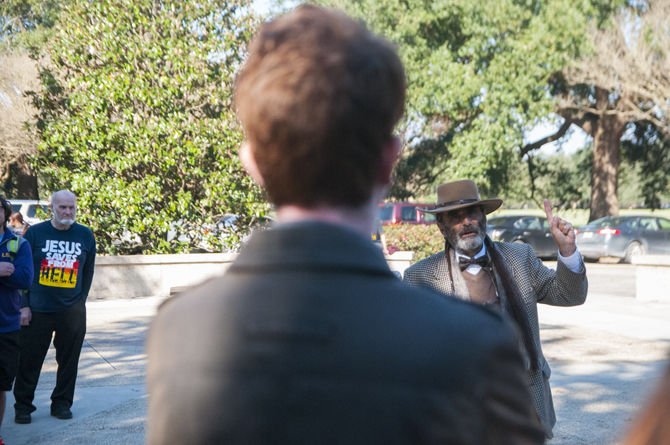 One particular visitor to the Union’s sidewalk only comes once a year-- and almost always causes a raucous when he does.

Brother Jed Smock, 77, is an evangelist Christian, Founder and President of Campus Ministry USA, dedicating his life to preaching on college campuses with his wife, Sister Cindy. The couple recently visited the University’s campus on the week of Jan. 13 and created crowds of students who were drawn by their confrontational approach to preaching.

Their performances are often characterized by their large signs, saying ‘Jesus Saves’ or ‘Repent or go to Hell,’ while Smock walks around with a crucifix staff. He’s been in the career for over 40 years, touring campuses to spread the message of God’s wrath.

“They say they’re out here to preach, but it’s just a show," political science senior Jenna Gibbs said during one performance. "It’s just a stage act to get views on YouTube and get a rise out of people."

Smock's favorite Bible quote to share on campus is a paraphrase from 1 Corinthians 6:9-10:

His inspiration for pursuing the college-student demographic stemmed from his former career as a professor at the University of Wisconsin La Crosse, where he taught American history. During the 1960s, he joined the ‘drug-radical revolution’ and moved to a commune in Africa. It was there that he began to read the Bible, and when he returned to the United States, he began a more religious lifestyle.

In 1974, Smock began full-time preaching on college campuses. He’s visited hundreds of different campuses during his 46-year career, spending five hours each day during his visits, preaching to passing students.

“Our manner is to go to the center of campus-- where students are going to and from classes-- and we start at the noon hour preaching against sin,” Smock said. “We want the students to know, and know on certain terms, that Christianity is the only hope and that Jesus is the only way to God.”

His career began as only himself, but along the way he met his current wife, Sister Cindy. Smock said they met at the University of Florida when he called her a "wicked woman" and told her to repent for her sins.

“She was stunned by my rebuke, no one had ever called her a wicked woman,” Smock said. “She got to thinking about her conscience and the way she had been raised, and that she had become a bad girl. She eventually converted and joined us in the ministry.”

However, his attempts at conversion are rarely as successful. Typically, his preaching is met with shouts and boos from crowds of students who disagree with his message.

Smock said he chooses controversial arguments and speeches purposefully; he hopes to incite a large crowd in order to debate with students about the purity of their lifestyles. He said he attempts to call out those who do not follow evangelical beliefs in order to make them think about their sins.

“We aren’t targeting Christians,” Smock said, “we’re targeting nonbelievers. So yes, we are trying to start a dialogue. The worst thing that can happen is to be ignored, but we are very rarely ignored.”

But Smock does admit that he fails to see many of those students reach out to him for repentance. He receives emails on occasion from born-again Christians who apologize for mocking him, but in a given week he said he only sees one or two students pray with them or make a confession to God. He did not receive any interest from students at the University during his visit.

English freshman Charles Landry, who saw Brother Jed Smock and his group speak multiple times, does not consider himself religious and was not inspired to look into evangelicalism after seeing them.

“No one there was taking them seriously or actually listening,” Landry said. “The thing that he’s going for is unattainable—getting people to think about their sins. It’s not going to work if you’re just a guy in public. If you’re going for shock factor, I guess it worked.”

Smock often incites frustration from his crowds through his stances on homosexuality, pluralism and mental health.

Smock proudly displays a video of him singing ‘The Gay Song’ on his website, in which he sings to students—including one transgender woman—at Texas A&M University.

“Is there anyone here that would object if I sang ‘The Gay Song?’” Smock said in the video. “One more question: you promise me that if your feelings are hurt, then you won’t go out and commit suicide?”

“My feelings are cast-iron,” responded one student.

The song continues on. Smock recalls that video with a laugh, saying he enjoys making fun of homosexuality with homosexual people. He also does not believe that his song, or his homophobic rhetoric, will ever have serious repercussions like suicide.

Smock’s interest in college campuses also stems from what he believes to be an overarching philosophy of multiculturalism and acceptance of all religious views. However, he denounces such a practice, as he says that Christianity is the only true acceptable religion.

Smock also believes that most mental illnesses, including schizophrenia, are caused not by physiological processes, but by sin.

“The symptoms are real,” Smock said. “But I believe their problem mostly is that they’re living a selfish life. If they turn from a self-centered life to a God-centered life, and start thinking more about others, then they’ll be in full mental health.”

Pre-nursing freshman Meredith Davis is also a self-professed Christian, but she said she doesn't consider herself and Smock to be apart of the same religion.

“They keep hating on everyone here, and I don’t think they came here to spread the word but to tell us how they are more holy than we are,” Davis said.

Over the past few days, a Christian Ministry group known as Campus Ministry USA has been coming to LSU in Free Speech Alley to preach their re…