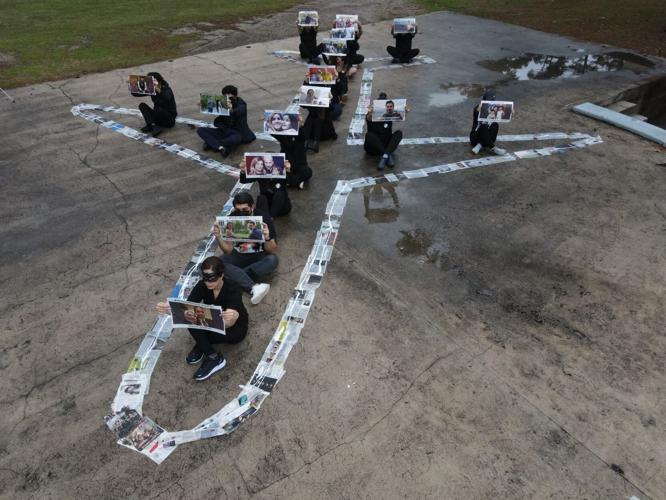 Members of the local Iranian community honor victims of downed 2020 flight and the feminist protesters in Iran in a performance video in the Greek Theatre on LSU's campus. 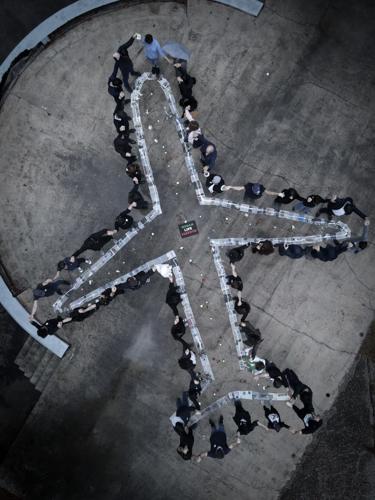 Local Iranian community members stand around an outline of a plane in LSU's Greek Theatre. 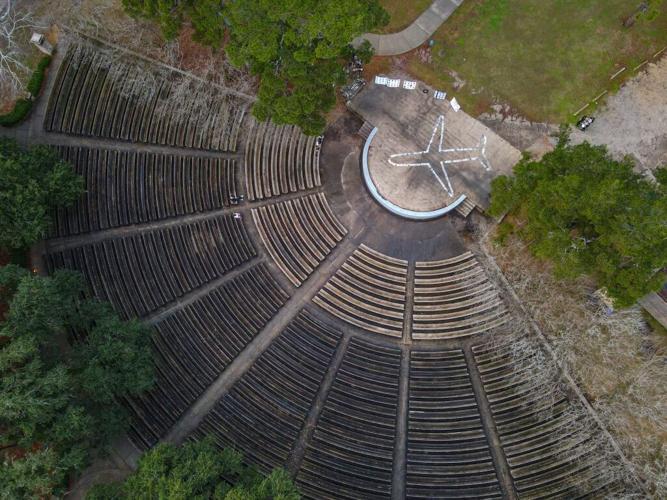 Members of the local Iranian community honor victims of downed 2020 flight and the feminist protesters in Iran in a performance video in the Greek Theatre on LSU's campus.

It’s been three years since the Iranian government shot down a Ukrainian passenger flight from Tehran bound for Kyiv. And it’s been four months since a feminist revolution erupted in Iran after Mahsa Amini, 22, died in the custody of the Iranian police, who arrested her for an alleged dress code violation.

Members of the Iranian community from LSU, Baton Rouge and surrounding areas put together a performance art video in the LSU Greek Theatre to memorialize the 176 souls lost in the flight and bring attention to the ongoing struggle for human rights in Iran.

3 years ago on January 8, the Islamic Republic downed the flight #PS752 by two IRGC missiles and killed all 176 passengers and crew. Iranian’s of Louisiana community did this performance in memorial of this tragedy at #LSU, Greek Theatre.#MahsaAmini #IRGCterrorists pic.twitter.com/RpLDXN7Xzk

The video starts on a sign reading “Woman, Life, Freedom” in the colors of Iran’s flag, the calling chant of the recent protests. It zooms out to reveal people dressed in black surrounding an outline of a plane made from news reports.

Ukraine International Airlines flight PS752 was shot down on Jan. 8, 2020, days after the U.S. assassinated Iranian General Qasem Soleimani. The Iranian government first denied involvement in the crash but later admitted to firing missiles at the flight. But the government still claimed it was a mistake.

Among the victims were 15 children and a pregnant woman. There were 82 Iranians, 63 Canadians, 11 Ukrainians and other passengers from Sweden, Afghanistan and the United Kingdom, according to the Ukrainian government.

“And it just shows that it doesn't matter if you are protesting against the regime or if you are [just] living your life… The regime doesn't leave you alone. It's just — it's hunting its own people,” said a woman involved in the video who asked to remain anonymous. “And they lie about it.”

About 45 people were involved in the video, according to a woman who asked to be identified by Behi TVS in fear of retaliation for her family members in Iran. She designed the project alongside another woman, identified by her initials S.N., and worked with a videographer and editor, identified by his initials K.K.

“Most Iranians of the town actually showed up to light the candles and show that we are not alone in this and show them that we don't forget all the people who were innocent and got killed by this regime,” the other woman said.

Protests for women’s rights sparked at the funeral of Amini, the 22-year-old arrested by Iran’s “morality police.” Women took off their hijabs in defiance of the government’s dress code, according to news reports.

A 2021 United Nations report says women are treated as “second-class citizens” in Iran and details some of what protesters are fighting to change now — strict dress codes enforced on women, lack of autonomy in marriage and other sectors of life and weak protections against domestic violence.

At least 516 protesters have been killed since the unrest began, including 70 children, according to the Human Rights Activists News Agency. The group says almost 20,000 protesters are in prison. There have been widespread reports of torture against detained protesters, including beatings and sexual assaults.

The Iranian government shut down the internet, blocking apps like WhatsApp, Signal, Instagram and Skype, according to CNN. For Iranians abroad, this means little communication between their family and friends and fears that they’ve become the next victims of state violence.

“We barely can talk to even our parents for more than two minutes,” the woman involved in the video at LSU said.

Amid the protests and international attention, Iran was expelled from the United Nations’ Commission on the Status of Women.

“They are not the ones that you want in the Women's Commission to actually make rules for all the women of the world,” the woman said.

She said this was a step toward removing Iran’s credibility—credibility they don’t deserve, she says.

“It's not Iranian people. Iranian people are actually wanting the world to look at these people,” she said. “And they notice that we are being governed by terrorists.”

Behi TVS, one of the designers, said they wanted to show that even in a small city like Baton Rouge, people in Iran have a community supporting them.

And the Baton Rouge participants were joined by over 100 cities around the world in showing solidarity with the victims of the flight crash and protesters in Iran, according to Middle East Matters, a youth advocacy organization. The video at LSU was edited into a compilation of other demonstrations from corners of Germany, Turkey, Canada, Italy, South Korea, Iran and other countries.

“We hold each other's hands,” the other woman said, describing the video. “This is a human chain that we were doing in the U.S. to be united with all other people all over the world who are looking for freedom, looking for a just system, and looking for human rights and women rights.”