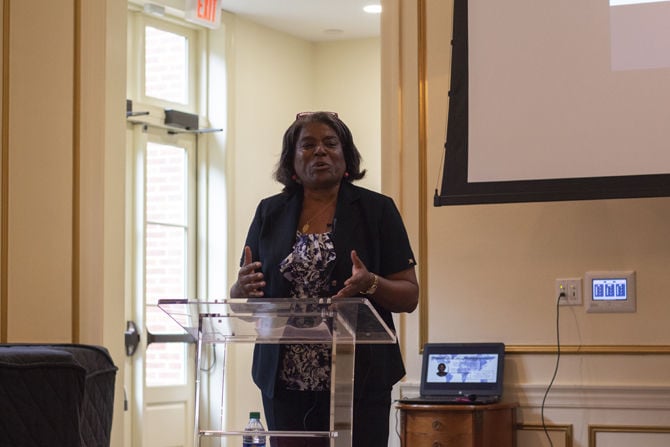 Former U.S. Ambassador Linda Thomas-Greenfield speaks to students about her experiences in the French House on Wednesday, Aug. 29, 2018. 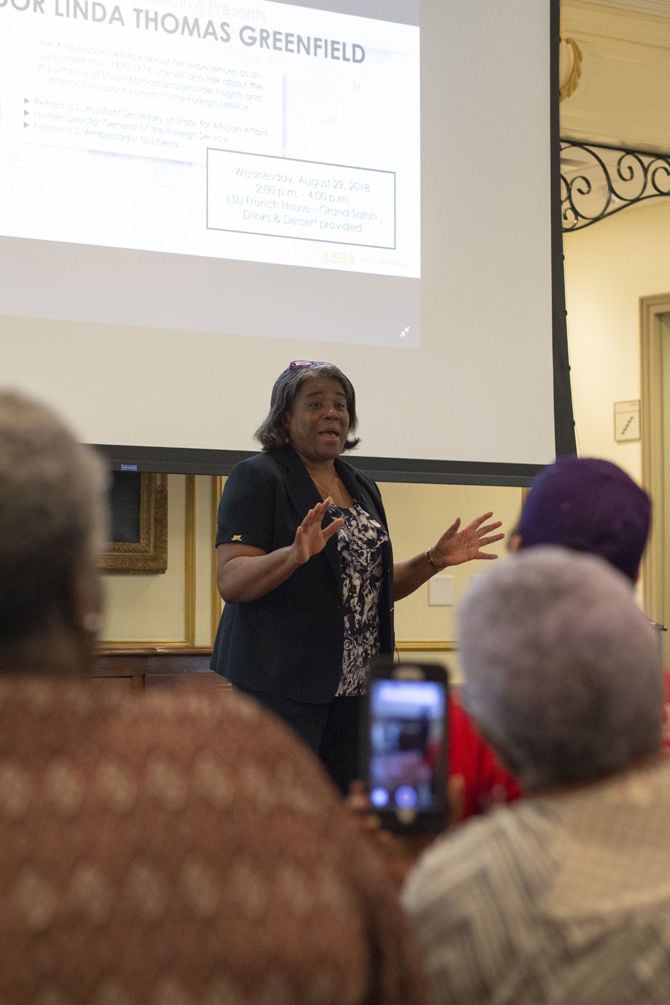 Former U.S. Ambassador Linda Thomas-Greenfield speaks to students about her experiences in the French House on Wednesday, Aug. 29, 2018.

In her remarks on Nov. 24, she explained how she put a “Cajun spin” on diplomacy in her 35 years serving across four continents the Foreign Service. Thomas-Greenfield was born in Baker, Louisiana, a rural town north of Baton Rouge, and she paid homage to her home state by engaging in what she calls “Gumbo diplomacy.”

“Wherever I was posted around the world, I’d invite people of different backgrounds and beliefs to help me make a roux, and chop onions for the holy trinity and make homemade gumbo,” she said. “It was my way of breaking down barriers, connecting with people, and starting to see each other on a human level-- a bit of lagniappe is what we say in Louisiana.”

Emeritus Professor of Sociology at LSU Thomas Durant met Thomas-Greenfield when she spoke to the LSU Black Faculty and Staff Caucus over 20 years ago. He said that as the second Black woman to serve in her new position, Thomas-Greenfield will continue to shift the culture of American politics.

“To see that a Black woman is the leader of American foreign policy, it sends a signal to this country and to the rest of the world that America will live out its dream of being a truly multicultural society,” Durant said.

He said that Thomas-Greenfield is a “well-qualified and well-grounded” pick for U.N. Ambassador, having served as Ambassador to Liberia and held postings in Pakistan, Kenya, Nigeria and Jamaica, among other countries.

Durant said that Thomas-Greenfield will renew Americans’ faith in foreign leadership and restore integrity on a global stage.

“She will do an excellent job of restoring leadership on the world’s stage that has been so diminished in the last four years,” Durant said . “We have lost some of our leadership, power and respect, and I think people like Linda will be able to capture that American power and leadership again.”

LSU alumnus Dr. Albert Agard has spent over 20 years serving in the international government in Africa. He said Thomas-Greenfield will flourish in her new position as she works to improve relations between the United States and countries all over the world.

“The fact that she has been exposed to so many diverse cultures makes her aptly qualified for this position,” Agard said. “She will have to make decisions for the world, and I can’t think of any other U.N. Ambassador in the past several years that has come with this type of qualification. You can’t substitute briefings for actual experience."

He met Thomas-Greenfield when she reached out to him during his time as an international student when they were both undergraduates at LSU. She befriended him, checking up on him and making sure he acclimated to college life in Louisiana.

“I think that was an indication of things to come,” Agard said. “She’s always had a heart for diplomacy on a global scale. For that, she’s going to be a great ambassador.”

Endowed Chair of Race, Media and Cultural Literacy and professor at LSU Tina Harris said that Biden and Harris’s cabinet nominees represent racial, ethnic and cultural diversity in a way that is critical to their political success.

“People elect politicians to protect their rights and defend their interests, and women and people of color have not always been represented,” Harris said. “The lack of representation translates into the creation, development and subsequent adoption of policies and laws that are counterintuitive to the interests of marginalized groups. With nominees like these, trust is built between voters and government officials through representation and the belief that someone is acting in their best interest.”

Thomas-Greenfield said that as she remembers her humble beginnings, she thinks about the American people and their hope in the face of cruelty and struggle. She said that global challenges like COVID-19, climate change and poverty can be solved if America is leading the way.

“America is back,” Thomas-Greenfield said. “Multilateralism is back. Diplomacy is back.”