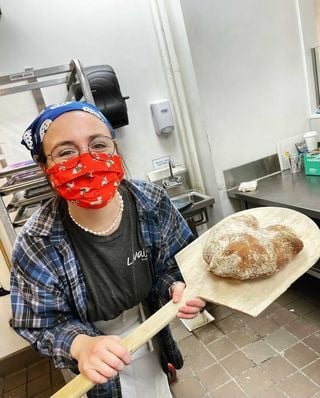 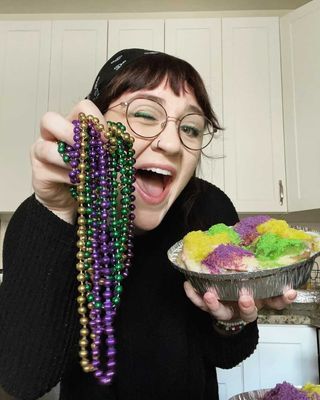 LSU alumna Alexis Ryder followed her passion for baking to New York City after graduating with a communications degree and is not looking back.

Ryder found a passion for baking in her junior year of college when she got a job at the local bakery Counterspace. Even though she had no experience, she worked her way to lead baker and learned along the way.

She brought Louisiana culture to New York by baking and selling king cakes out of her apartment to raise money after Hurricane Laura hit her hometown. She raised $800 to help with relief for friends and family who lost their homes.

She said she also had requests to keep making king cakes during Mardi Gras. People in New York were excited to try king cake for the first time, which led to a lot of orders, Ryder said. She said she was making cakes to fill orders on her days off.

“Getting to share that little bit of my culture just fed my Louisiana soul so much,” Ryder said.

When she first got to New York, she worked in a traditional communications job, but Ryder said she did not enjoy working at a desk. Her former boss at Counterspace encouraged her to apply at Levain, a famous New York bakery.

"I’ve always had this idea I think since high school of doing something big and grand and going somewhere, because life is short and I intend to live a really fun and exciting life,” Ryder said.

Ryder is currently a first baker at Levain and is working toward being a lead baker. She has not attended culinary school and does not plan to, but she said she would love to go to Paris and have an apprenticeship one day.

“When you are a first baker you come in the earliest out of everyone and you throw the bread into the deck ovens, you bake all the cakes, you bake all the pastries and everything,” said Ryder. “It’s a level with more responsibility.”

The bakery has even been featured in popular shows and movies because of its popularity and is known across the globe.

“I think like the most exciting part is working at one of the most famous places in New York City,” Ryder said. “We are in ‘Gossip Girl,’ we are in ‘To All the Boys I’ve Loved Before,’ we are in a bunch of these TV shows and you get to see the impact your workplace has had not only on New York City, but the world.”

Before the pandemic, Ryder said the bakery was constantly crowded with people. Now, people are still able to watch bakers behind the counter, but the traffic through the bakery has slowed down.

“Before the pandemic, we would have lines around the block at each bakery because in New York there are I think six bakeries between Manhattan and Brooklyn,” Ryder said. “It’s just really exciting to see the amount of joy that people get from getting a huge cookie breaking in half and sharing with their friend.”

Ryder said her biggest takeaway from her experience since she has graduated is that no matter what you have to do what makes you happy.

“No matter what you get your four-year degree in, you have to do what makes you happy,” Ryder said.

Thunderstorms. Potential for heavy rainfall. High 71F. Winds S at 5 to 10 mph. Chance of rain 90%. Rainfall near an inch.

Cloudy in the evening, then thunderstorms developing after midnight. Low 57F. Winds ENE at 5 to 10 mph. Chance of rain 80%.

Rain showers in the evening with scattered thunderstorms arriving overnight. Low near 60F. Winds E at 5 to 10 mph. Chance of rain 60%.

Partly cloudy in the evening. Thunderstorms developing after midnight. Low 52F. Winds N at 5 to 10 mph. Chance of rain 30%.