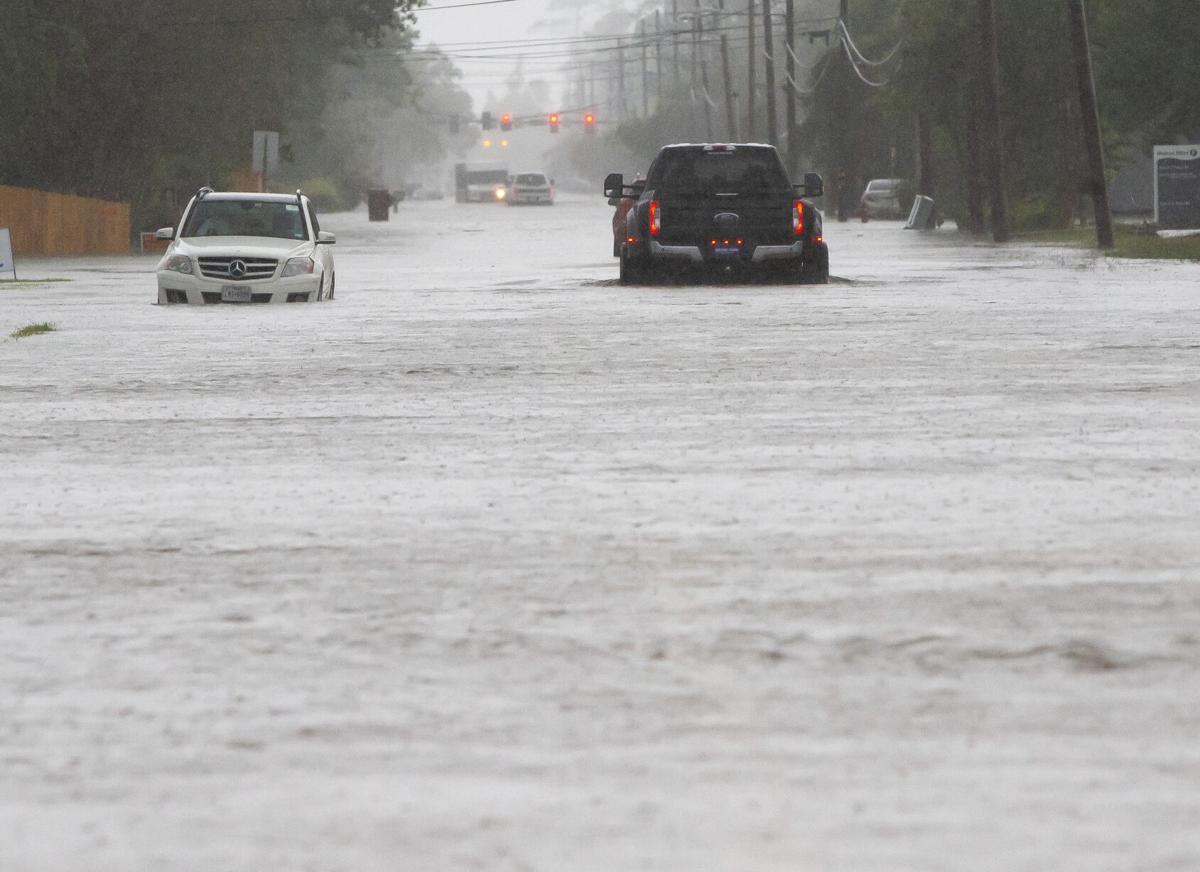 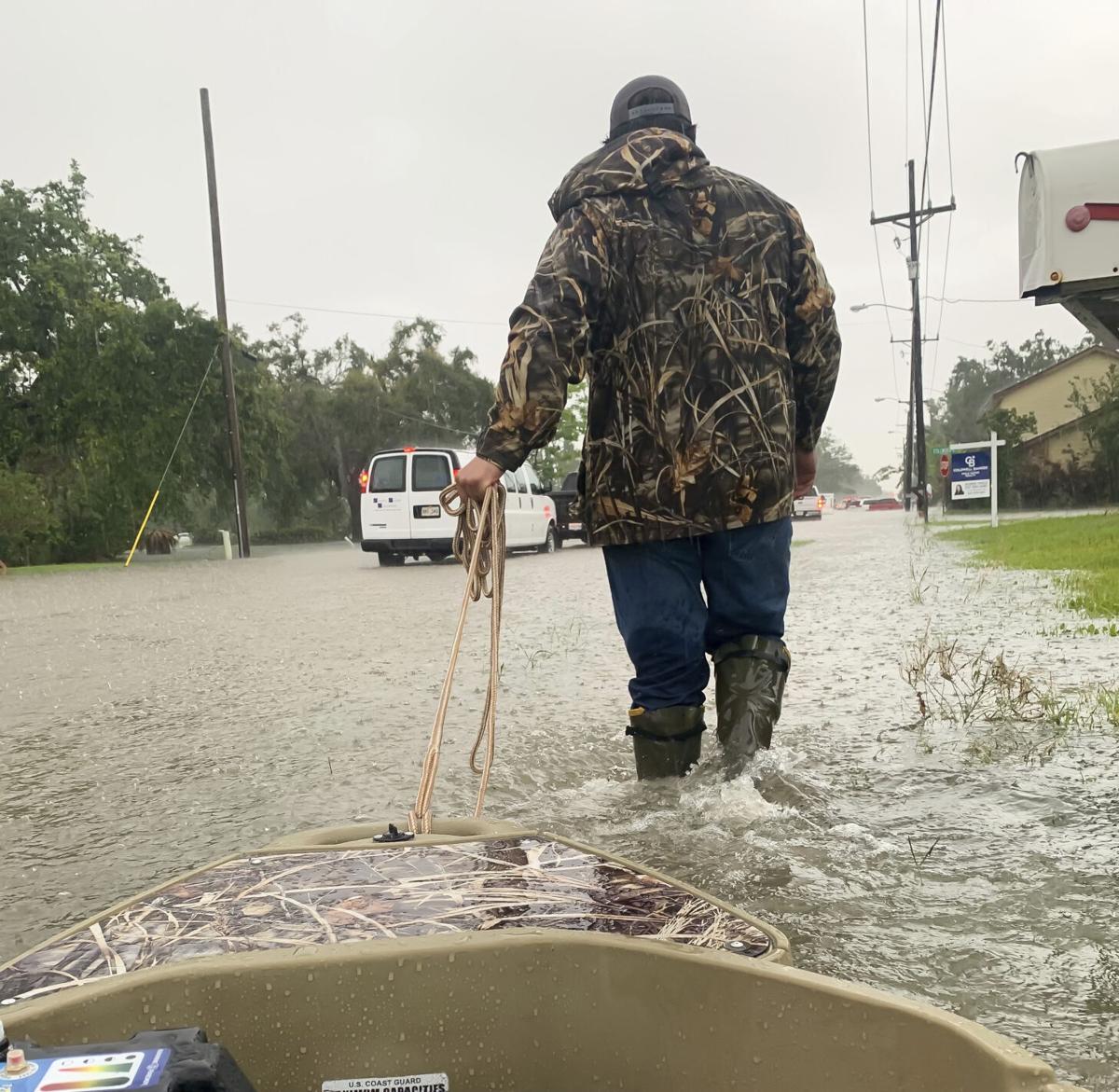 Nick Delgado uses his boat to help a neighbor pick up their kids from schools during heavy rains in Lake Charles, La., Monday, May 17, 2021. (Rick Hickman/American Press via AP) 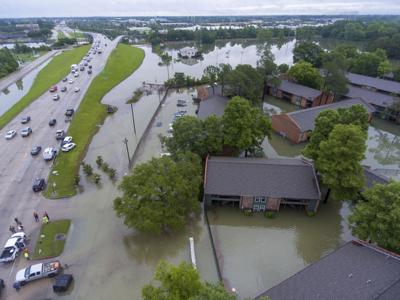 The flash flooding events that many Louisiana cities experienced on Monday, May 17, amidst a series of severe storms added to the devastating effects of recent natural disasters and highlighted the deep infrastructural issues within the state.

LSU’s campus experienced low levels of flooding as well, with numerous cars submerged in water and some surrounding apartments experiencing damage. On campus, most buildings with basements faced issues of water intrusion, including Coates, Allen and Atkinson, Executive Director for Facility and Property Oversight Tammy Millican said. The intersection of Nicholson and Burbank were hit pretty hard and Stanford Avenue was shut down due to flooding.

Mass communication senior Ricky Bryant described seeing several cars outside his Nicholson Gateway apartment flooding, and residents' feverishly moving their vehicles to the third level of the parking garage to avoid the rainfall.

“Some of the cars were getting so badly flooded out that the horns were going off, the electronics were spazzing out,” Bryant said.

Recent marketing analytics graduate Garrett Phillips is living with his family in Lake Charles over the summer and said the flood and storms set back much of the progress the community was making after the hurricanes and winter storms of the last year.

Phillips was at a friend's house when the water levels began rising, he said. There was no warning about how severe the storms would be that night.

“We came to the realization, ‘this water is coming in the house,’” Phillips said. “We started moving everything to higher shelves, started doing everything you do for a flood. We were thinking ‘this can’t be real after everything that’s happened.’ But you come to terms with it and go into survival mode, doing all you can. We’ve all experienced it before, so it’s almost natural, in a weird way.”

Phillips said they climbed onto the roof of his friend's house and saw that the whole neighborhood was flooding. They eventually swam to a dry area so Phillip’s father could bring them to a safe location.

The next day, a tornado ripped through Phillips’s family’s backyard, tearing down a recently built fence and nearly flipping the trailer he was living in. As soon as the storm subsided, he made his way back to Baton Rouge.

Some say that natural disasters are becoming so common and severe that it is driving people out of Louisiana cities. Phillips said when his father retires in three to four years, his parents plan to move. When asked if Phillip would stay to develop his career in the state, he said “absolutely not at this point.”

“I’m staying here for the summer, but there’s no way I can live there anymore,” Phillips said. “It’s out of the question.”

Construction management sophomore Esten Fuselier said the rain affected his jobs at both the concrete company he works for and at Mike’s in Tigerland. He said the water delayed much of the work his company needed to get done and the flooding around the ditch near Fred’s affected business at all the bars in Tigerland.

“People don’t go out with bad rain," Fuselier said, "so we got less people than we already do since it’s summertime and we don’t make as much profit.”

Assistant professor of environmental sciences Brian Snyder said the reason Baton Rouge and surrounding areas have experienced so many episodes of flooding is due to two main causes: the building of houses and paving of concrete, paired with the immense rainfall that occurs in coastal regions.

“As you get a foot of rain, if you’ve paved over thousands and thousands of square feet of land, that rain is going to flood into people’s houses and roads and overwhelm the drainage systems,” Snyder said. “It’s not rocket science; we took a bunch of swamp and put pavement over it. When we get a foot of rain, there’s going to be flooding.”

Snyder said the amount of rainfall Louisiana experiences is “not what happens anywhere else in the country,” which is why the state experiences flooding more often than other parts of the nation.

“It’s because the Gulf of Mexico sometimes just decides to dump a huge amount of water on top of us,” Snyder said. “We live in this already relatively wet area where we get 70-80 inches of rain some years, and the way that’s distributed is a lot of it falls at one time, often in the afternoons, often in the summer, and it can lead to a lot of flash flooding.”

There are numerous possible solutions to Louisiana’s flooding problems, but Snyder said a good first step would be to put a moratorium on building for about a year until those solutions are implemented, as the Ascension Parish President suggested.

“If we continue to build, for sure [we can expect more flooding],” Snyder said. “If you build another Walmart, and another subdivision, there’s going to be an increased risk of flooding. And on top of that you have climate change, which throws in a big unknown.”

Snyder said one solution to decrease the risk of flooding on LSU’s campus would be to implement permeable parking lots, which are designed to allow water to seep through them back into the soil below the surface, while also filtering pollutants. Since parking lots take up a large part of LSU’s campus, this could be one solution to providing better drainage and reducing the chance of flooding.

Millican said LSU Facility Services are considered essential personnel, so custodial staff was present even when campus was closed. She also said the university has an emergency response vehicle with fans and water extractors to remove water, and roofers are constantly maintaining the roofs to prevent leakage.

“There are 539 buildings on campus, so the ability to get all of them when something like this happens can be difficult,” Millican said.

International studies sophomore Mary Jett McLarty, who works at the UREC, said the flooding required the UREC to completely shut down May 18. She also said the following days the UREC couldn’t operate normally and required a limited number of staff to cope with the damage.

“I could not get my car out of the parking deck, and my job shut down for the day," McLarty said. "I lost about nine hours of work because of the flooding.”

Phillips said when his family was hit by Hurricane Laura, LSU didn’t reach out to check on him or his other siblings at the university.

“No one really reaches out, you might see a tweet here and there, you might get an emergency email, but it doesn’t feel personal,” Phillips said. “After what we’ve been through, an automated email means nothing to us. They have plenty of call centers, maybe they could have people call and check in to make sure everyone’s doing all right.”

Phillips said when his family lost their house after Laura, many professors doubted him and were unwilling to tailor the course to his needs. Phillips said LSU should do more to inform professors of what students may be going through and encourage them to be understanding.

“Some of these kids, they’ve lost everything,” Phillips said. “They fix it with everything they have left and it gets knocked down again. School’s the last thing they’re worried about. These kids have seen it all at this point, just give them a break. I don’t know how you can do that academically and be fair, but that’s going to be something they might have to discuss.”

Bryant said he believes LSU is doing the best they can given the circumstances.

“I think that LSU doesn’t really have the resources to fix the streets, and they’re going to have to have help from the city and state and possibly federal dollars,” Bryant said. “I think LSU is doing the best with what they can, but it’s definitely something that should be addressed and we should be working with the legislature working with the metro council to make campus safer for students so we don’t have to lose five vehicles every time there’s a thunderstorm.”

Partly to mostly cloudy. A stray shower or thunderstorm is possible. High near 95F. Winds WNW at 5 to 10 mph.

Intervals of clouds and sunshine. A stray shower or thunderstorm is possible. High near 95F. Winds W at 5 to 10 mph.

A few clouds. A stray shower or thunderstorm is possible. Low 76F. Winds WSW at 5 to 10 mph.

A few clouds. Low around 70F. Winds light and variable.

A few clouds from time to time. Low 71F. Winds light and variable.