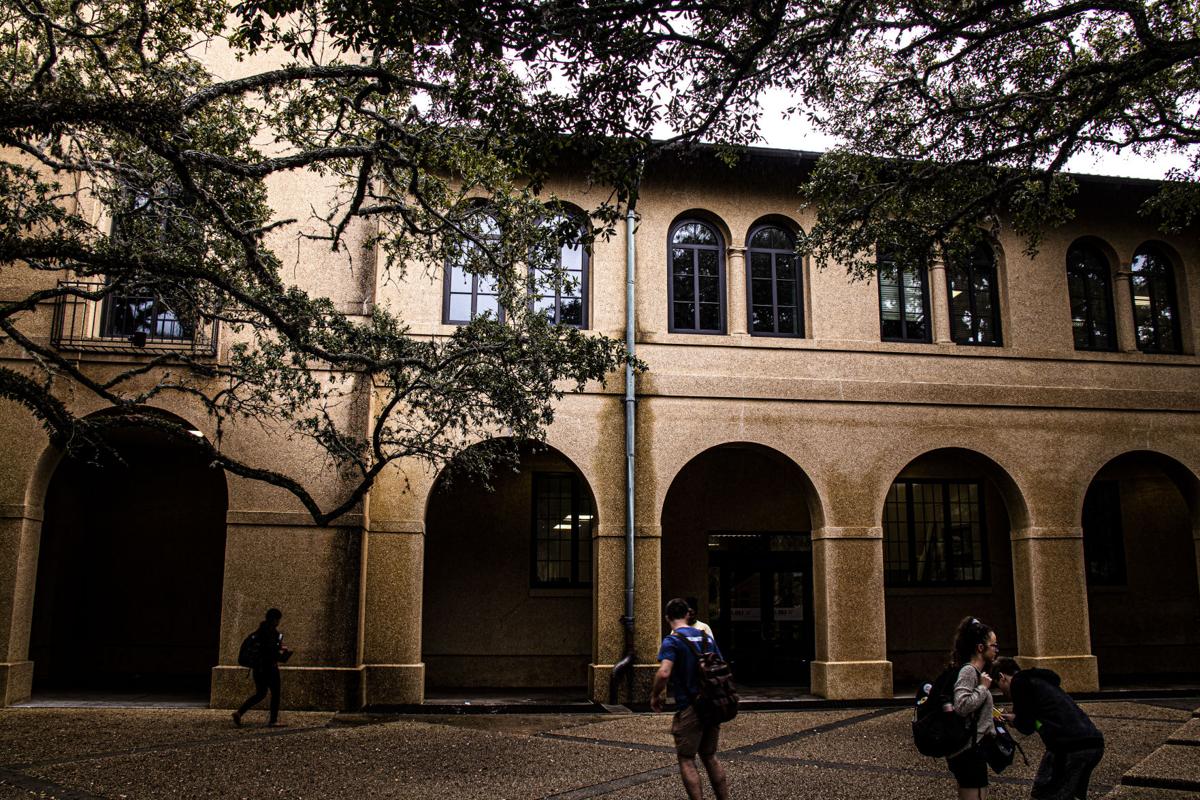 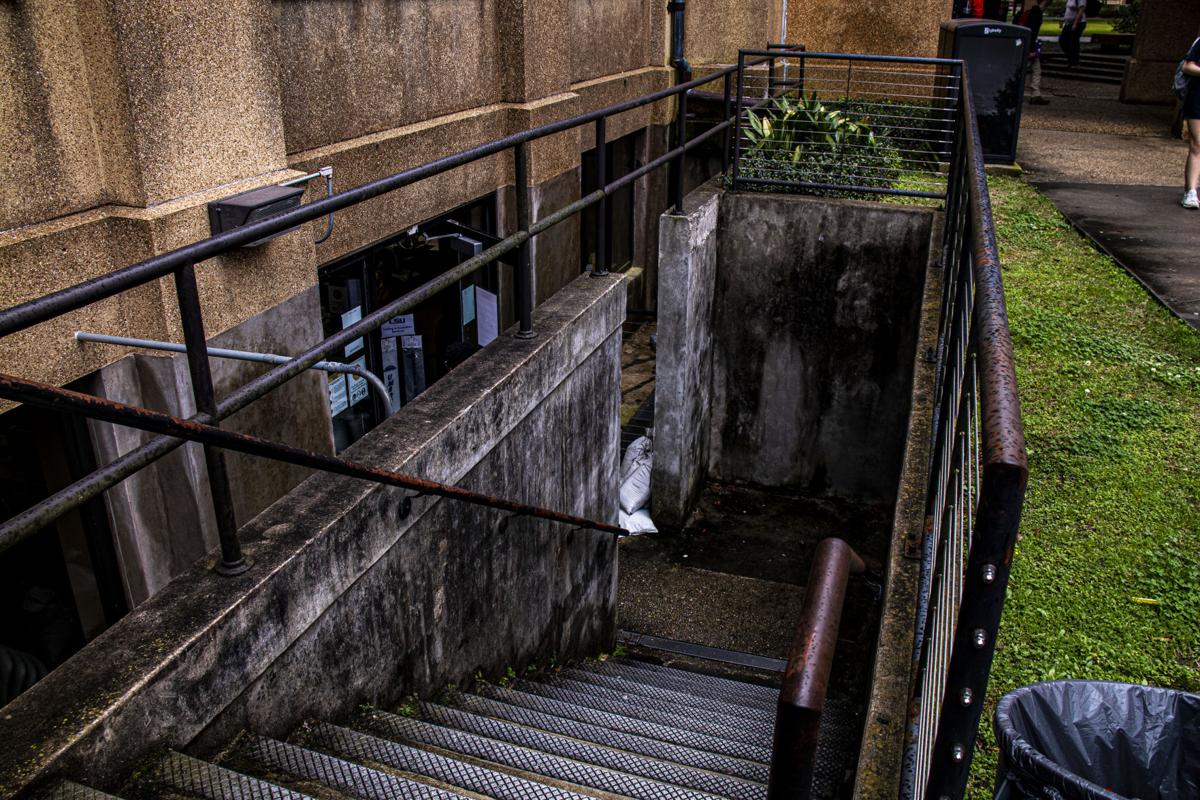 The stairs that lead down to the testing center in Himes Hall's Basement on Monday, Feb. 10, 2020 on LSU's campus.

The stairs that lead down to the testing center in Himes Hall's Basement on Monday, Feb. 10, 2020 on LSU's campus.

Livie Broussard, a plant technology sophomore, had her physics final exam in the Himes Testing Center. She booked it weeks in advance, spent hours upon hours studying the material and calculated the exact grade she needed in order to earn an A in the class. She arrived to take her exam only to find her scheduled time slot was overbooked. Broussard had to wait outside until a spot became available.

Finally, Broussard walked into the exam and presented her Tiger Card and calculator at the front desk. Although she verified the testing center’s calculator requirements beforehand and clarified with her professor that her calculator would be permissible to use, the employee at the front desk told her it wasn’t allowed and confiscated it.

Broussard had to use an on-screen calculator, which does not offer the trigonometric functions necessary to complete her exam. She had to scribble most of the complex math problems on paper.

“I ended up getting a much lower grade on my test than I should have because the people did not know their own rules,” Broussard said.

The Himes Testing Center serves as a facility for professors to administer computer-based tests across a window of time, saving professors time on grading and allowing students to choose their test-taking time. However, for many students, the facility creates high levels of anxiety and discomfort that negatively affects their test scores.

The Himes Testing Center has over 300 seats, each with a computer covered in an incognito screen cover. Students receive assigned seat numbers after checking in and are instructed to turn off phones and smart watches. Students must also place their belongings underneath their seat and can then begin their tests.

The testing center has supervisors walking around, helping students with technical problems and making sure they aren’t cheating, according to Himes Hall Associate Director David O’Brien. The workers make test-taking feel uncomfortable, especially when they leer over students’ shoulders as they work, some students said.

“Once, I went to the Himes Testing Center and heard a phone go off,” photography senior Amber Hoff said. “I made eye contact with one of the workers, and he proceeded to hover around me for the rest of my test. All I could think about was if he was going to pull me out for cheating. I couldn’t focus at all on my test while he walked around my computer.”

Complaints regarding Himes Testing Center employees also pertain to the organization of the front desk workers. Many students recall arriving at the testing center to find overbooked time slots, which is typically answered with an ultimatum: wait for a seat to open up or find a new time slot.

Mass communication freshman Rebecca Herin had to miss a class just so she could take a test during an overbooked time slot.

“I walked up and tried to check in, but they told me they were overbooked and that I’d have to wait or reschedule,” Herin said. “I tried to reschedule, but there were no other available times, and it was the only day to take the test. So I just had to skip one of my classes in order to take the test because they messed up and overbooked.”

O’Brien said this scheduling system is optimal for test-taking.

Last semester, the testing center experienced technical difficulties twice, resulting in hour-long lines and some students having to reschedule their test for the next day.

On Sept. 20, the testing center shut down due to an overflow of test takers and a fire alarm.

There were 3,500 students scheduled to take a test on Sept. 20, with the testing center checking in about 330 students an hour. O’Brien said this was a significantly higher number of students than usual.

The fire alarm went off at 3:56 p.m. due to a minor issue in the error handling room on the third floor, according to O’Brien.

On Oct. 21, the testing center turned away students waiting to check in and those already taking tests due to a technical difficulty.

Himes Testing Center turning students away due to technical issues

LSU Testing and Evaluation Services Operations Manager Sandra Guillot said a technical difficulty with the server and program was the cause of the October shutdown.

For many students, the design of the testing center fails to provide a comfortable working environment. Fluorescent lighting used in the testing center has been attributed to causing panic attacks for people with anxiety issues and can cause physiological symptoms like rapid heart rate.

“We do as much as we can to make it a comfortable environment while taking their test,” O’Brien said. “I can’t confirm the validity of their [the students’] statements.”

“All of my experiences [at the testing center] have been bad,” Cressy said. “I’ve had two or three panic attacks. There was one time where I was taking a final at 11 p.m. After studying all day for days, sitting in the dark with the bright white lights in the room created such a separate feel from the rest of campus. It felt like a hospital and it drove me crazy.”

However, O’Brien said the testing center does implement some measures to alleviate test-taking anxiety.

The anxiety induced by the testing center may be attributed to students being in a less familiar environment. The American Research Institute performed a 2018 study regarding the difference in scores between paper and online standardized tests. Online test-takers performed, on average, as if they had 11 fewer months of preparation time than paper test-takers. The researchers hypothesize that this was possibly caused by less familiarity with computer-based testing or the facility that the testing occurred in.

Other studies by the University of Nevada in Las Vegas determined test scores can lower due to a change in environment, such as not taking a test in the same classroom. This same study also recommends should a test be administered online, study materials and practice tests should also be administered online.

Center for Academic Success Director of Academic Engagement and Achievement Gloria Thomas recommended students utilize a series of test-taking strategies when testing at the testing center.

“Take a deep breath and pull your shoulders back,” Thomas said. “When we get into anxious moments, especially in a testing environment, we can tend to hunch over and curl our shoulders in as we are studying the test.

“When you find yourself doing that, curling into yourself, you’re compressing your ribcage and not getting enough oxygen to your brain, which makes you more anxious. Stop, sit up straight in the desk, stretch and take a few deep breaths when you notice you’re becoming more anxious.”

Thomas also said students should utilize scratch paper as much as possible during computer tests. The Center for Academic Success receives an equal amount of complaints between paper-based tests and computer-based tests.

The conclusion from many students was they prefer to simply have paper tests in the classroom with their professor present.

“I would either want my tests to be through Moodle or on paper,” Herin said. “I don’t like the program [the Himes Testing Center] use because I can’t go back or flag my questions easily.”

“In general, I feel like going into Himes is not good for my grades or my test taking strategies,” Broussard said. “I want to be able to talk to my professor and ask questions.”