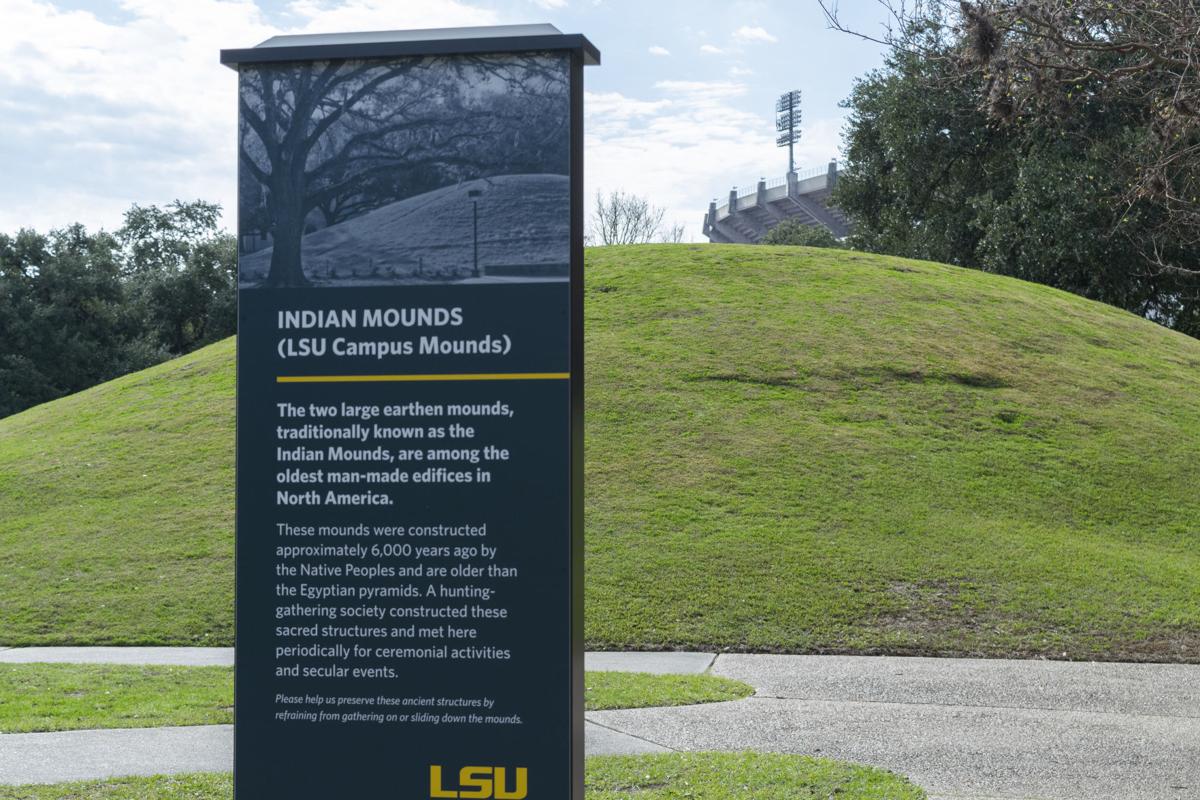 The Indian Mounds sit on Tuesday, January 28, 2020 on Dalrymple Drive.

LSU students sled down the Indian Mounds on Monday, Feb. 15.

When severe winter weather conditions resulted in school cancelation Monday morning, a group of LSU students decided to visit a historical monument. But they didn't spend the day examining its origins or beauty. Instead, they used its elevated location as a platform for makeshift sledding.

The LSU Indian Mounds may be the oldest man made structure in the world, with some estimations placing its construction at 11,300 years ago, according to the LSU Geology Department. Its extraordinary age hasn't stopped it from being a common spot for student socialization.

The Indian Mounds on Cypress and Field House drive could be the oldest man-made structure left standing, according to Geology Professor Brooks…

An article in WAFB published Monday, which was not public on the website as of Thursday afternoon, featured pictures of students sledding down the frost-coated mounds with everything from baking sheets to plastic boxes and even one kayak.

As some LSU students enjoyed two “snow days,” others faced power outages amid freezing temperatures caused by a winter storm.

"I am asking administration for the immediate funding of permanent and attractive fencing around the Indian Mounds to ensure their protection," Thompson said. "Additionally, there needs to be appropriate signage about the significant historical value of the Indian Mounds as well as clear notice for people to treat them reverently."

Thompson also said the destruction of the mounds would be a loss for the entire LSU community, but more importantly the Native American community, whose culture the Mounds represent.

Thompson encouraged students who are interested in learning more about the mounds to join NASO on Tigerlink. The organization will be having an open meeting entitled, "A history of misuse: The Story of the LSU Indian Mounds. Additionally, students can use NASO's letter template to voice concerns regarding the Mounds' protection to University administrators. The template can be accessed via Google Docs here.

Other University organizations, such as LSU Democracy at Work, expressed solidarity with NASO.

"We demand LSU to use its vast (stolen) resources to meet the demands of not only its indigenous students, but all indigenous people of Louisiana who have suffered under the very settler-colonialism that has benefitted the University," the organization's statement read. "We also call for other student organizations who want to engage in the struggle for social equity to not expect any major action by white profit-drive power structures like LSU, but to work with NASO to grow its organization and to collaborate with us in our anti-imperialist program."

"I don't know how many times this has to happen before LSU takes any type of action," @rebameanon wrote. "How people are allowed to desecrate a 9,000 year old grave site so flippantly boils my blood."

I dont know how many times this has to happen before LSU takes any type of action. How people are allowed to desecrate a 9,000 year old grave site so flippantly boils my blood. https://t.co/Xm56790Gjb

The university fought harder to protect the naming of a library honoring a racist. But when it comes to sacred indigenous land, y’all don’t care. Cute. https://t.co/paDdRoftcA

hey @LSU care to comment on the historical landmarks on our campus that are thousands of years old being used as bunny slopes? https://t.co/lH3iwJczwu

As of Thursday, the video posted by @lsubarstool was still posted.

This is not the first time student activists have called for LSU Administration protect the Native American landmark.

In 1985, a sidewalk was installed in between the mounds to protect the structure from human traffic. Another restoration effort in 1996 used river silt to repair existing damage. In 2010, a "Save the Mounds" campaign resulted in temporary chain-link fences and a few signs to deter tailgaters.

The mounds have suffered structural damage that may cause them to eventually collapse, according to University officials.

As of February 2021, the University has not established a permanent initiative to protect the mounds and enforce trespassing restrictions.

Opinion: In light of recent discoveries, the LSU Campus Mounds are in need of more protection

The Indian mounds on Dalrymple, officially known as the LSU Campus Mounds, are among the University’s most iconic campus landmarks. Their myst…