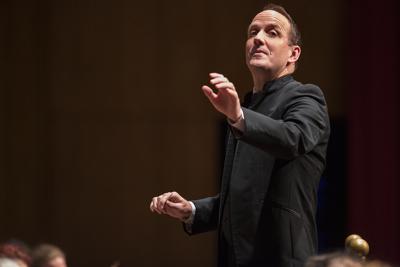 Conductor Scott Terrell will join the LSU School of Music as an associate professor and the new director of orchestral studies at the beginning of the spring 2021 semester.

LSU’s School of Music announced the hiring in a press release Oct. 1.

“I look forward to beginning this new chapter in my life,” Terrell said in the press release. “I’m thrilled to be working alongside faculty, students, administration and the extended LSU community.”

“The most joy I get is from working with young, aspiring musicians,” Terrell said. “I’ve had experience in conducting for about 25 years, but I’ve always wanted to teach.”

Additionally, Terrell has conducted all over the nation and overseas in cities like Rotterdam and Hong Kong and served as the music director of The Lexington Philharmonic in Kentucky.

Terrell initially planned on joining the school of music for the fall 2020 semester, but the hiring process saw complications from the COVID-19 pandemic. Director of the School of Music James Byo said the current maestro, Carlos Riazuelo, is retiring after the current semester.

“Originally, Riazuelo planned on retiring after the past school year but the pandemic halted our hiring search and resulted in him staying for another semester,” Byo said.

Byo said the School of Music interviewed over a hundred applicants for the position before narrowing it down to 10 applicants. Then, they selected three finalists to audition for the position with some students on campus in September.

Byo said Terrell was the candidate who stood out to the School of Music the most.

“Scott Terrell is a confident musician,” Byo said. “He is an inspiring individual. He gave off the vibe of an effective leader of students and faculty. He gave me the impression of a down-to-earth guy who’s a great human being.”

Byo believes that Terrell can be the fresh input the School of Music needs.

“We’re looking for Maestro Terrell to find new ways to expand LSU’s orchestra to newer audiences within the LSU community,” Byo said. “We hope Terrell will push the LSU orchestra towards a nimble direction while also introducing a more provocative style of music.”

Terrell also has high aspirations for his future at the School of Music.

“I hope to create the highest caliber orchestra that I can,” Terrell said. “I also wish to introduce new experiences to the students. I want to equip students with the musical, industrial and critical skills they’ll need in the professional world. I hope the students’ experiences will have a positive effect on the department’s recruiting efforts.”

Terrell is eager to see the program flourish when he starts leading in January.

“I see a strong foundation that’s worth building on,” Terrell said. “I’m excited to be a part of the LSU family.”

Cloudy this morning with thunderstorms developing this afternoon. Gusty winds and small hail are possible. High 76F. Winds SW at 5 to 10 mph. Chance of rain 90%.

Rain. Low 62F. Winds light and variable. Chance of rain 90%. Rainfall near a half an inch.

Rain. Low 62F. Winds light and variable. Chance of rain 90%. Rainfall near a half an inch.

Cloudy with periods of rain. Thunder possible. Low near 60F. Winds ENE at 5 to 10 mph. Chance of rain 100%. Rainfall may reach one inch.

Showers early, becoming a steady rain late. Low 48F. Winds E at 5 to 10 mph. Chance of rain 70%. Rainfall around a quarter of an inch.