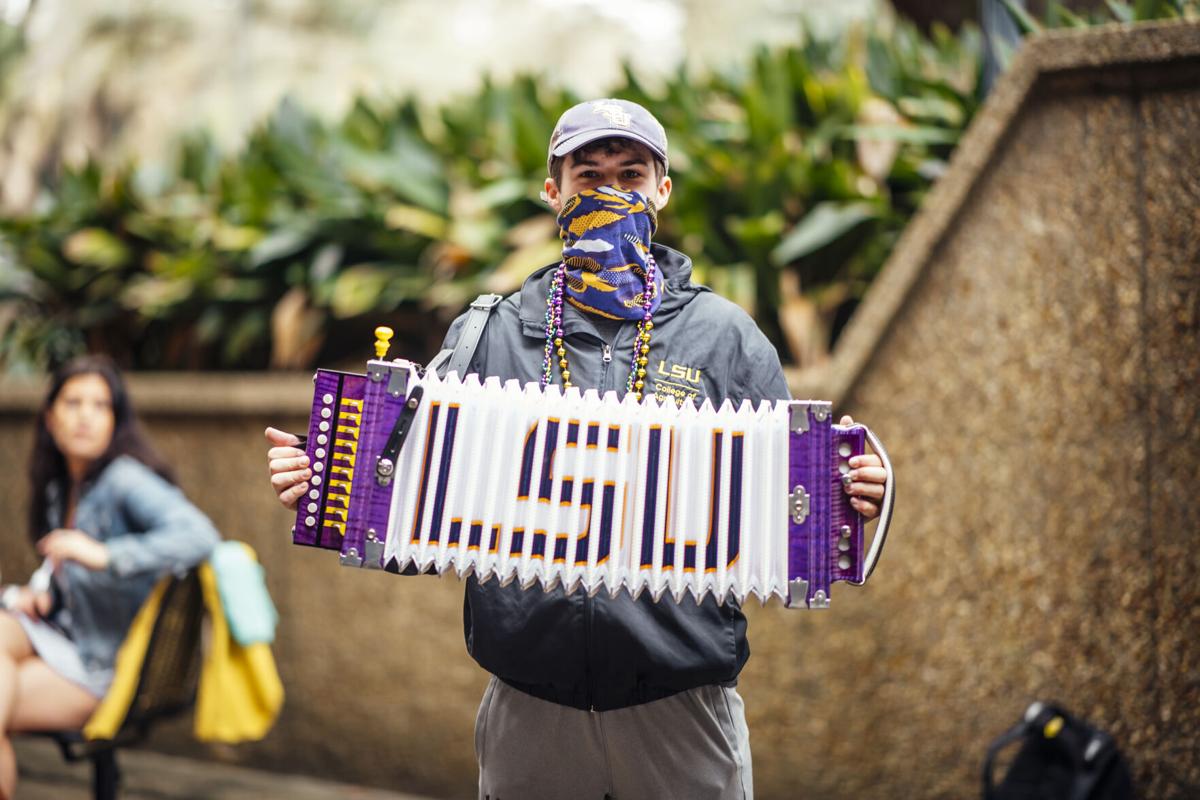 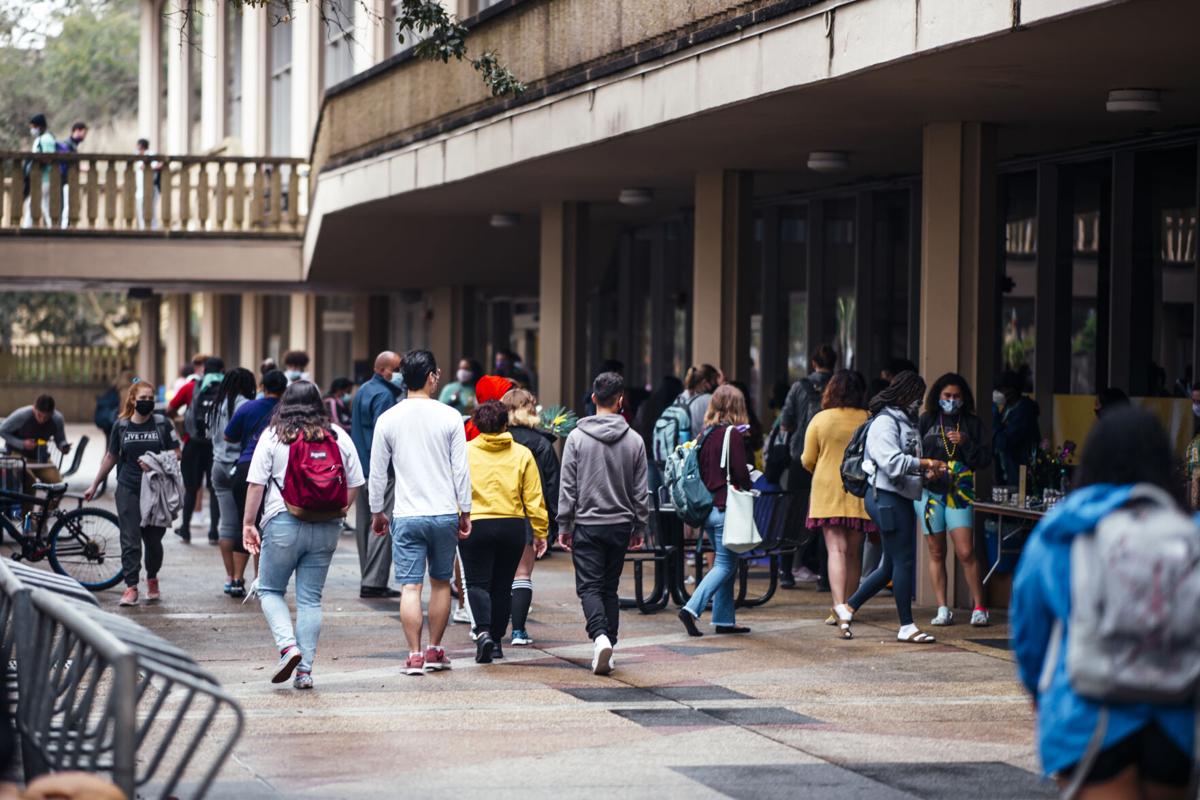 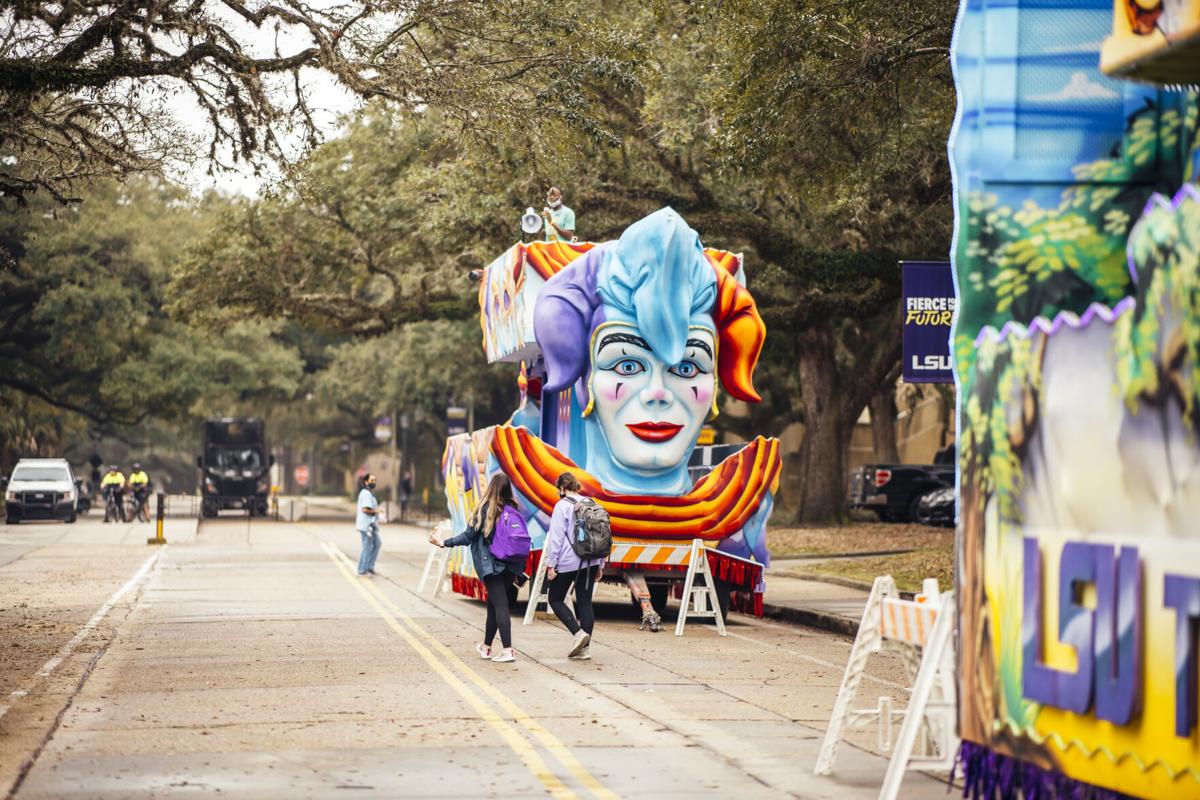 A Mardi Gras float sits Wednesday, Feb. 10, 2021 during the LSU Student Activities Board Mardi Gras Mambo event in front of the Student Union on LSU's campus in Baton Rouge, La. 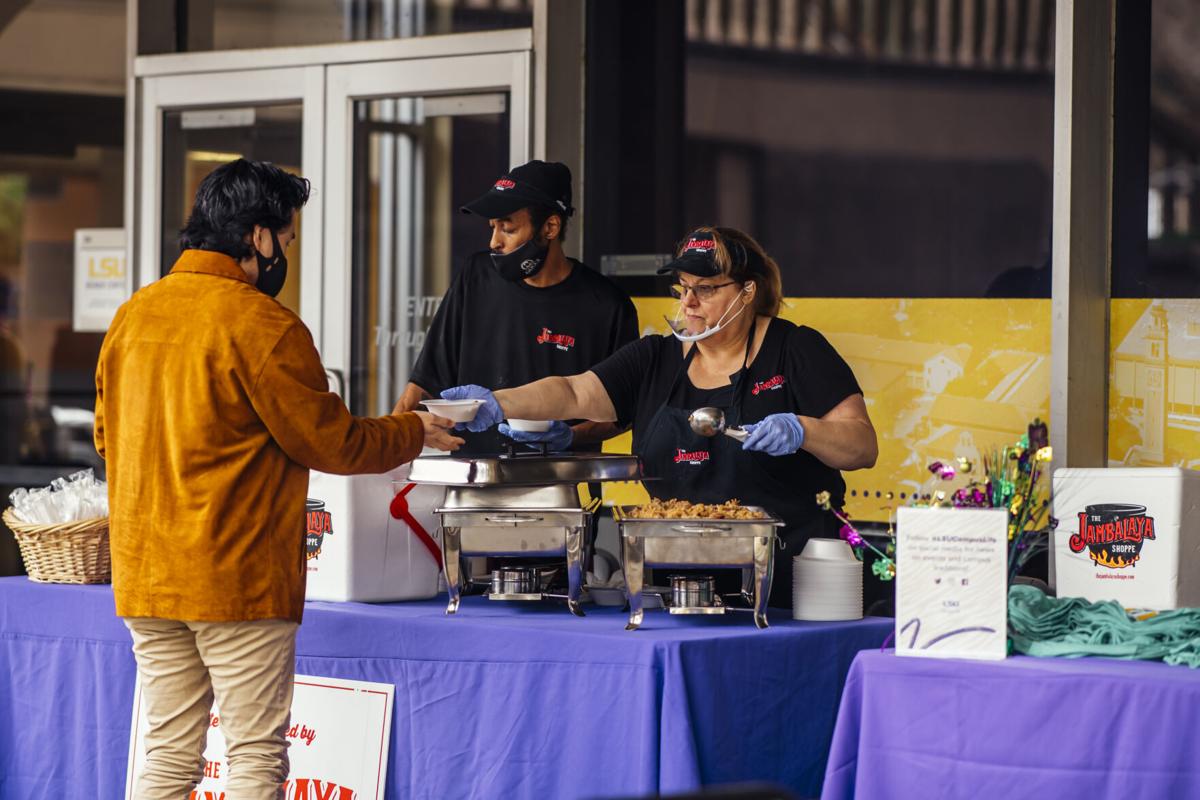 LSU English fifth-year Jimmy Lee gets jambalaya from the Jambalaya Shoppe Wednesday, Feb. 10, 2021 during the LSU Student Activities Board Mardi Gras Mambo event in front of the Student Union on LSU's campus in Baton Rouge, La.

A Mardi Gras float sits Wednesday, Feb. 10, 2021 during the LSU Student Activities Board Mardi Gras Mambo event in front of the Student Union on LSU's campus in Baton Rouge, La.

LSU English fifth-year Jimmy Lee gets jambalaya from the Jambalaya Shoppe Wednesday, Feb. 10, 2021 during the LSU Student Activities Board Mardi Gras Mambo event in front of the Student Union on LSU's campus in Baton Rouge, La.

The Student Activities Board partnered with Campus Life to host an in-person Mardi Gras Mambo event Feb. 10 as a quasi-replacement for the traditional Mardi Gras Masquerade, which was cancelled due to COVID-19.

The event was set up outside under the portico of the Student Union, where students could grab their free Mardi Gras items and some classic Louisiana food. There were two parade floats on display, one featuring a life-size statue of former star quarterback Joe Burrow.

"We still wanted to celebrate Mardi Gras and bring that experience to the students in a way that was safe for everyone to enjoy," Joshua said. "That's when the idea of Mardi Gras Mambo came up."

The event was created with COVID-19 restrictions in mind and set up as a "walk through" experience, Associate Director of Campus Life Alison Paz explained. Everyone attending wore masks, remained socially distant and used the available hand sanitizer. Students said they felt completely safe, especially because the event was outside.

"It's outside and since there's a lot of space down here people can space out as much as they want," psychology freshman Lane Cohen said.

The event was set up in stations where volunteers distributed food and merchandise to each student individually in order to decrease cross-contamination.

Opinion: Mardi Gras spirit in New Orleans is something we could all use

For most people around the world, Mardi Gras is just a regular Tuesday, but in New Orleans it is so much more.

"I think this is very safe because everyone is wearing masks and they're handing you stuff, you're not grabbing it yourself," communication disorders freshman Alden Barse said.

Mechanical engineering freshman Christopher McCready said that he believes there's a balance in determining how and when to limit public interactions because of COVID-19, but he felt that the event was safe and that SAB and Campus Life were doing a great job.

Most Mardi Gras celebrations are banned for the 2021 season, specifically in New Orleans, where the traditional parades are cancelled and the bars on Bourbon Street and surrounding areas will be closed.

"I'm from New Orleans and Mardi Gras, especially in high school, was a really big thing, hanging out with your friends and all being together," kinesiology freshman Hannah Burrell said. "I was really sad that we couldn't experience that [this year], but this is nice."

Accounting freshman Joanne Martin echoed Burrell's sentiment, and said that because she's from Baton Rouge, she's used to the normal Mardi Gras parades and festivities. She said this event brought back memories of the holiday and served as a replacement for the usual celebration.

"I feel happier now that I have this," Martin said. "It makes me less sad that the parades were cancelled."

Agricultural economics and agri-business senior Colt Hardee said he enjoyed seeing so many people out at the event having a good time.

"I love seeing the Cajun culture coming out and the Louisiana traditions that I've come to enjoy growing up," Hardee said. "I like international students being able to get exposed to this and out of state students as well."

Hardee said he was glad to see many students enjoying the Louisiana culture.

"It's just a Louisiana time, we're having a ball," Hardee said.

Communication studies freshman Mira Starosta said she enjoyed the event and that she wishes LSU did more events like this because it "hypes everybody up and boosts morale" in a time where not many in-person events are able to take place.

"I think they're doing the best they can with what they have," Starosta said.

There was concern at the beginning of the event about inclement weather in the forecast, but the rain held off until later in the evening.

"Student Activities Board and Campus Life were thrilled that the rainy weather held out, that students enjoyed the event and that all who stopped by to pass a good time were mindful of safety and social distancing needs," Director of Campus Life Jacob Brumfield said. "We’re thankful for everyone who helped the program be a success, including LSU Dining who made beignets on the spot."

About 150 students were allowed under the portico at a time, and several hundred passed through the event over the three hours it operated. This number of students was approved by LSU's Emergency Operations Center, Paz said.

Opinion: Outside of New Orleans, Mardi Gras is heavily misunderstood

What comes to mind when you think of Mardi Gras?