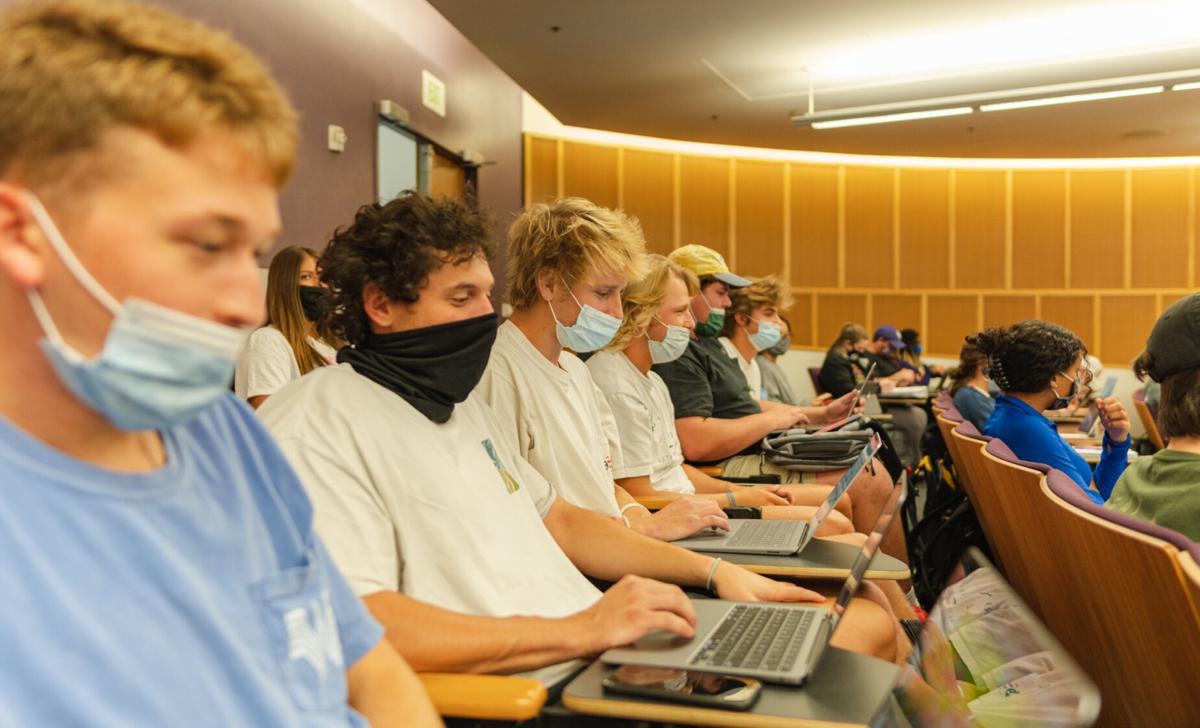 LSU sophomores (in order from left to right) Ben Huval a finance major, Charles Cherry a finance major, Seth Crowton a general business major, and Sam Ethridge a pre-med student sit on Aug. 26, 2021, one next to the other in the Business Education Auditorium. 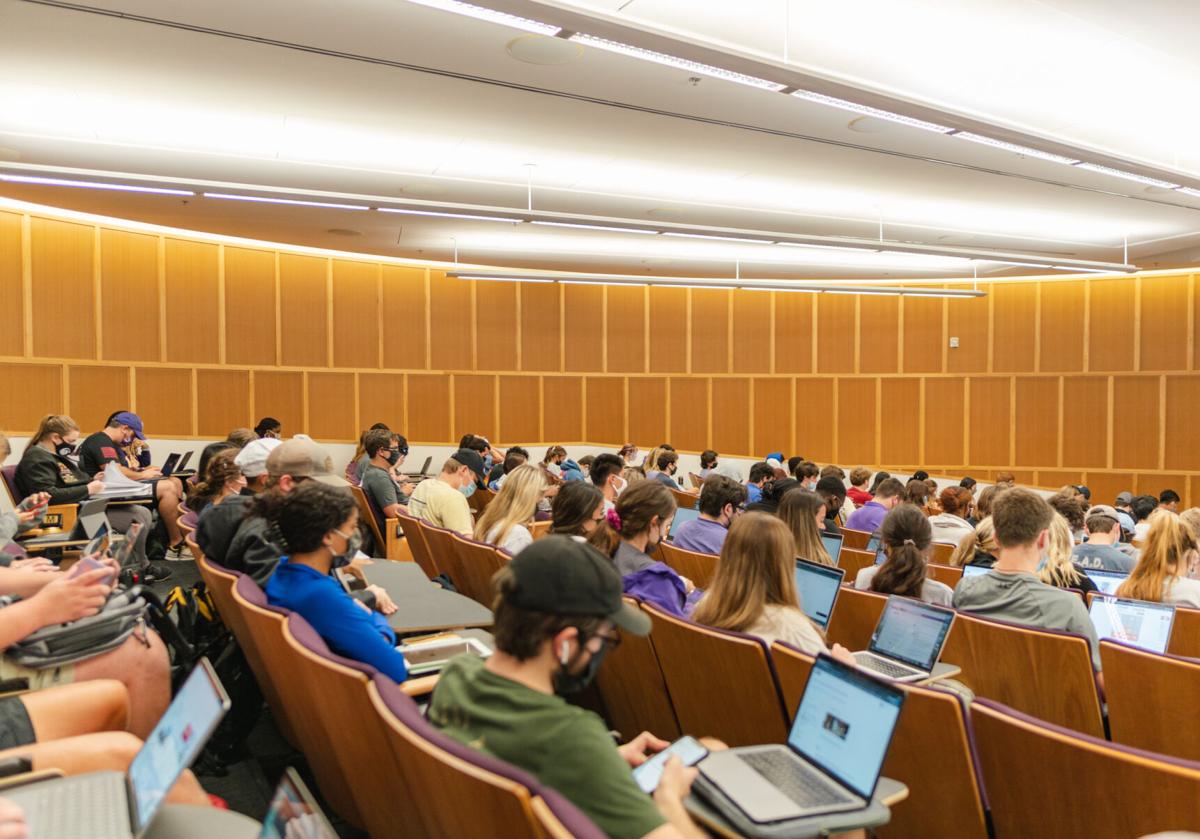 LSU students fill most of the seats on Aug. 26, 2021, of an Accounting 2001 class in the Business Education Auditorium. 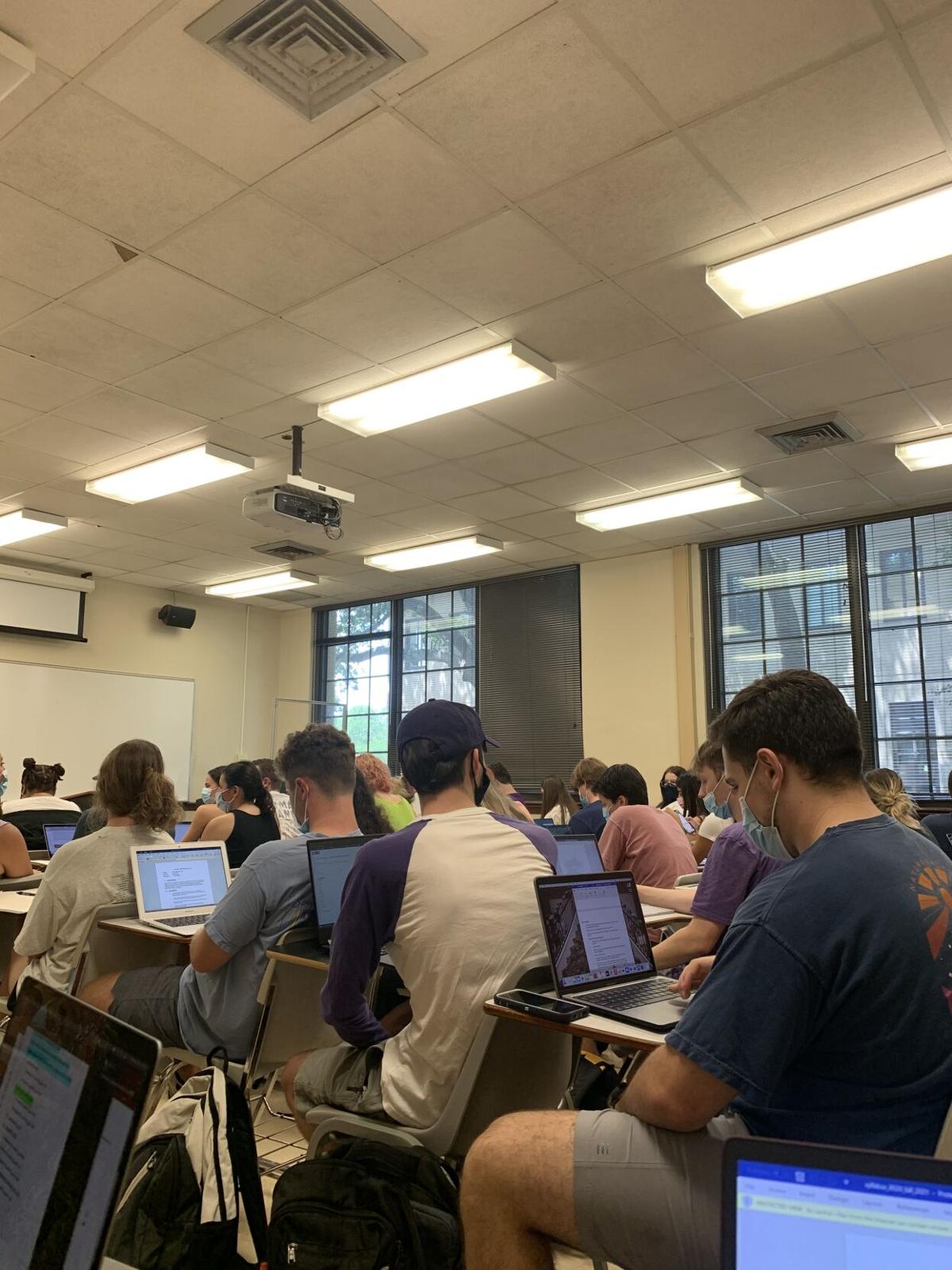 As students arrived on LSU’s campus for a fully in-person semester for the first time in over a year, they were greeted with crowded classrooms, buildings with no air conditioning and intense summer heat.

Students immediately raised concerns about the spread of COVID-19 in “elbow-to-elbow” classrooms.

Classes are being held at 100% capacity this semester, unless the university experiences a 10% or higher COVID-19 positivity rate, according to LSU’s mitigation protocols. Some rooms have additional desks lined up against the walls, exceeding the normal capacity of the rooms and overcrowding students.

Computer science senior Raquel Hodgeson said when she arrived on campus Monday, August 23, she was faced with crowded classrooms that had little to no room available for social distancing. Classes were either completely full or had very little space to spread out, she said, which made her feel unsafe and unable to focus.

“My first day of one of my classes was with like 90 people. I didn’t hear a word because I was so distracted,” Hodegson said. “I do pretty well in my classes but I’m worried that even if I do go in person and do everything right, I will still not do that well because I am so distracted by feeling uncomfortable and unsafe.”

Mechanical engineering senior Ben Bishop recalled a similar experience. He said students have to put in extra effort to find a socially distanced seat in class and that “you almost might be better off showing up late” to have a better chance of getting a seat away from others.

Bishop said although he is vaccinated and feels he would be fine if he were to catch the virus, he worries for the safety of others in his family.

“My dad had a liver transplant a few years back and is immunocompromised as a result, and due to family activities there are things that I have to do with him that I can’t avoid doing,” Bishop said. “So it’s not just a risk to me, it’s that I know that I’m a potential risk to others.”

Biology junior Sam Dreuil said almost all of his classes are extremely crowded and he thinks he could still contract COVID even though everyone is wearing masks.

Many students feel the risk is preventable by allowing online participation in classes and thereby decreasing the number of in-person attendees.

Some professors in larger, overcrowded classrooms have started offering a hybrid option after the first few days of class.

The current policy for switching classes to hybrid format says “only courses enrolling 100 or more students are allowed to opt into teaching a hybrid format during peak infection times. Courses under 100 students must remain at full capacity.”

It’s unclear if professors with less than 100 students are checking with the university before providing a Zoom option.

There is an avenue to apply for accommodation for faculty with personal COVID-related health concerns, although some elderly professors have reported their requests were denied.

According to a statement from Tammy Millican, Executive Director for Facility Services, LSU has a total of 810 rooms used for academic classrooms, class labs and computer classrooms.

In addition to packed classrooms, the Manship School, Tureaud Hall and Stubbs Hall had broken air conditioning units on the first few days of classes. The issues were resolved within the week.

“there was absolutely no air flow in [Tureaud Hall] because of AC being out,” Said animal science junior. “It was extremely hot, especially since I had just walked over half a mile to class because of the awful parking issues.”

“Facility Services staff immediately responded to calls on Monday regarding the temperature in Tureaud,” Millican said. “They discovered that the HVAC control air compressor had failed. Our staff ordered a replacement and installed a temporary air compressor that will be used until a replacement is delivered.”

Millican also said in her statement that “equipment can still unexpectedly fail,” although preventative measures are performed frequently.