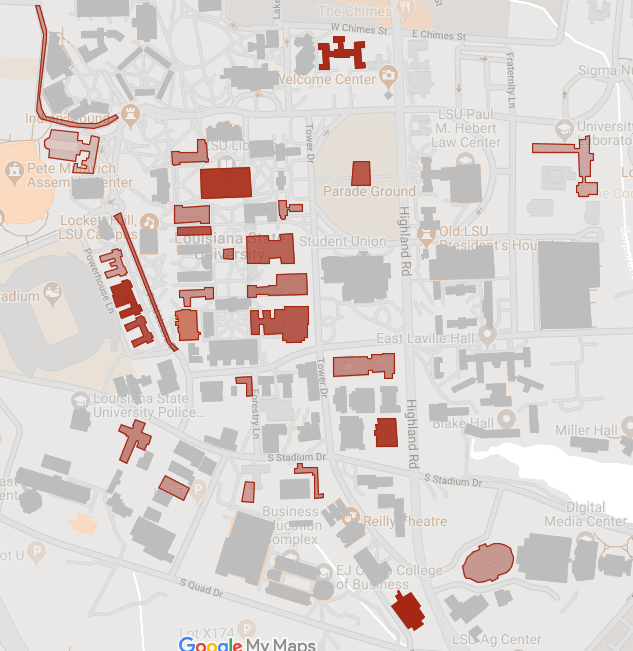 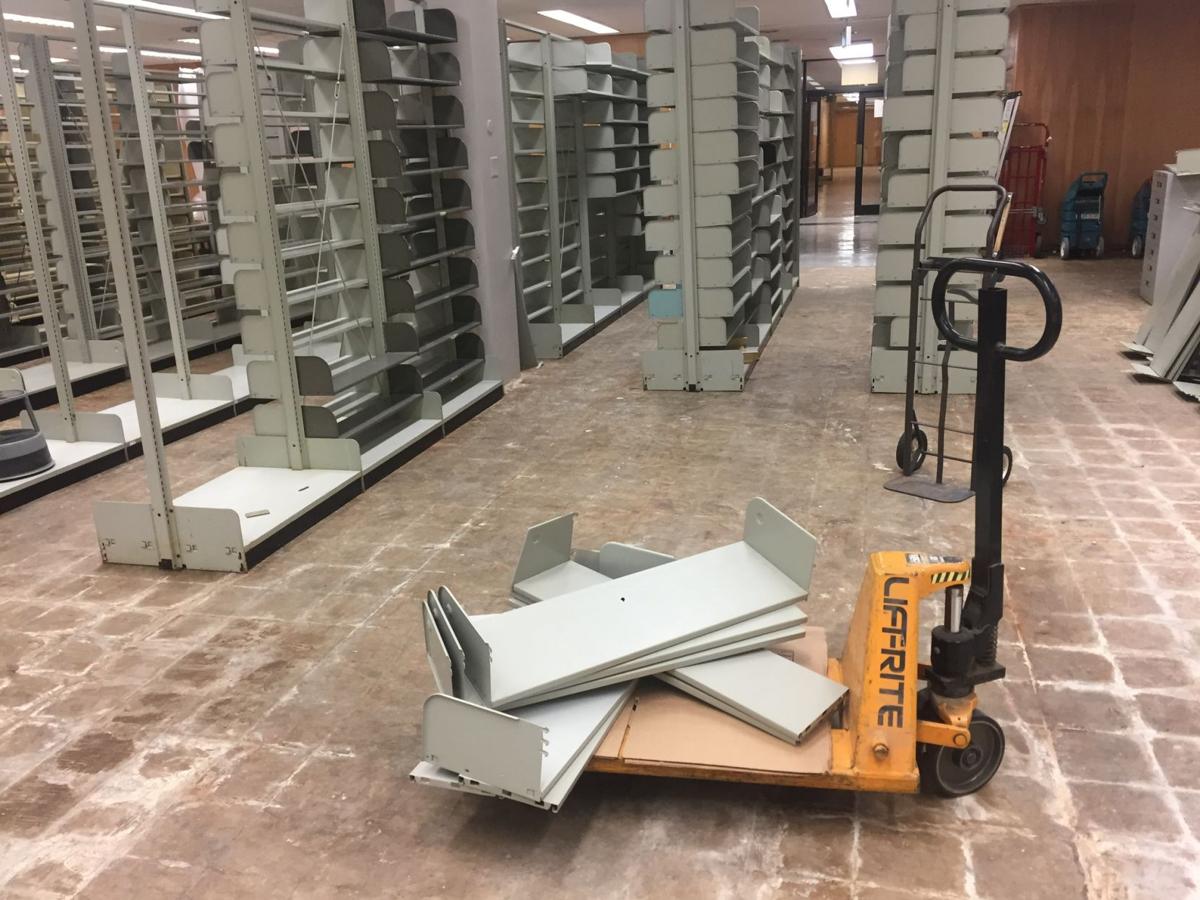 University students frustrated with outdated residential halls, a run-down library and a lack of disability accommodations around campus may soon see improvements. Although they may have to wait until a variety of other maintenance projects are completed.

Many older buildings on campus are not ADA compliant. Prescott Hall and Allen Hall, for instance, are both labeled as wheelchair inaccessible, according to the Facility Services’ deferred maintenance list. Parker Coliseum and Dalrymple building are also listed for ADA compliance issues.

All of these projects are scheduled to be completed after an array of window replacements, utility infrastructure repairs and roof renovations are done.

“We can’t do it all tomorrow,” Associate Vice President of Planning, Design and Construction Roger Husser said. “But as we learn about those critical areas, those are the ones we direct funds at.”

Executive Director of Facility & Property Oversight Tammy Millican said she is currently involved with a Student Government initiative to install proper Braille signage in some of the older, historic buildings and fix incorrect Braille plates.

Last year, the quote came out to be upwards of $60,000, but Facility Services and SG are working together to prioritize buildings or classrooms to bring the cost down to something more manageable.

“We’re always trying to find creative ways, whether it be through grants or other sources of funding, to take care of some of these problems,” Millican said.

The lack of Braille signage around campus came to Facility Services’ attention after a political communication class conducted research on the University’s ADA compliance.

Ultimately, projects are delayed for financial reasons or because there was a more urgent issue that needed to be addressed. Things like roof replacements, broken air conditioning units and implementing handicap accessibility receive top priority.

Allen Hall and Prescott Hall are currently on the list, needing to be made wheelchair-accessible. According to the list, this would cost $150,000 per hall.

The University usually has between 70 and 80 different construction projects underway.

“We have to think about how many people are affected,” Millican said. “With this amount of money, what can we do to help the most people?” 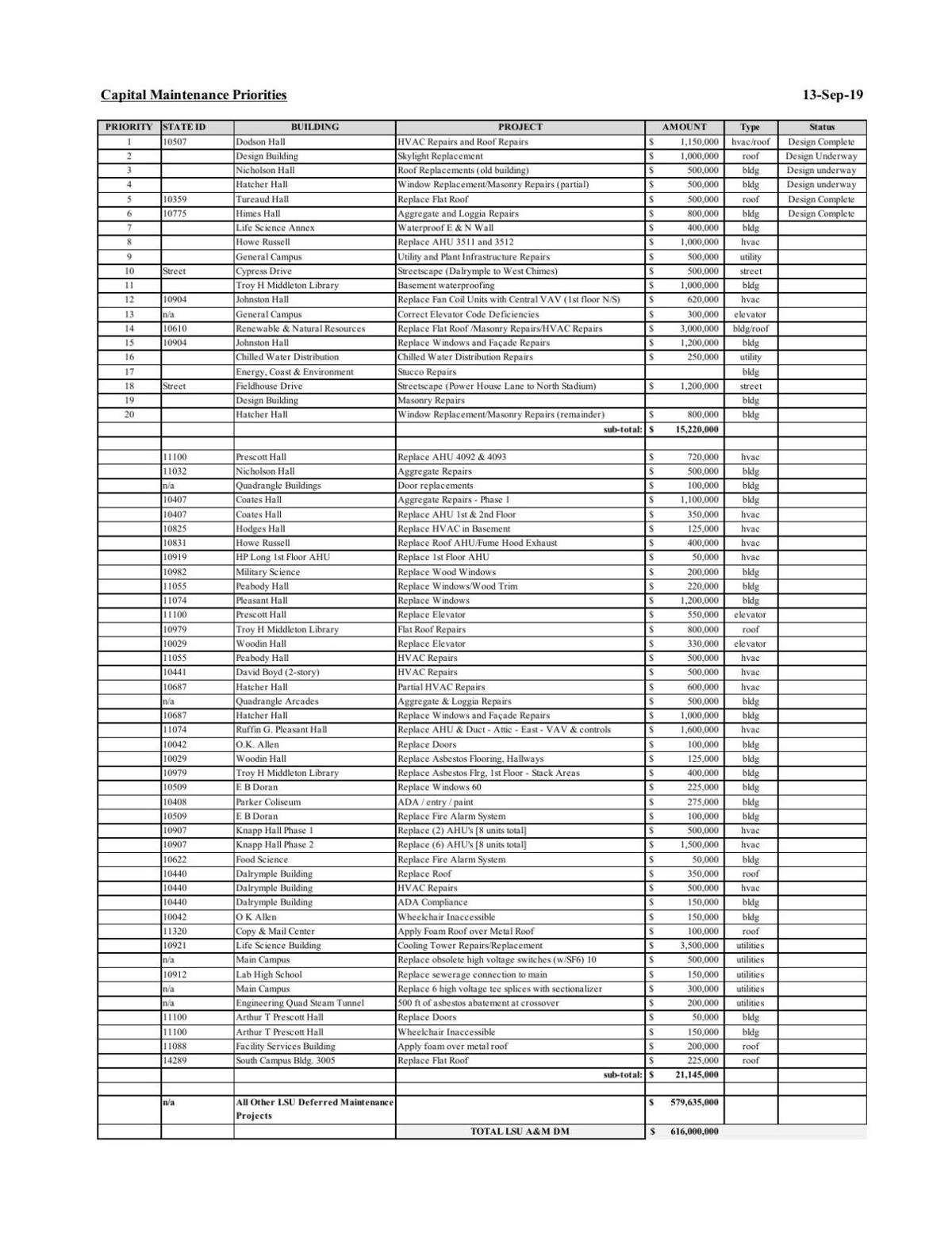 For instance, a sudden increase in freshman class sizes led to a suspension of the demolition of Miller, Hergert and McVoy residential halls.

“Ultimately they will come down, but because of our enrollment growth and the freshman housing requirement we have to keep using them a few more years until we can replace them,” Husser said.

Kirby Smith Hall is still slated for demolition. Husser said the only reason it hasn’t been demolished yet is because of concerns about the noise and dust disturbing students during the semester. The demolition, scheduled for May, will require three months of cleanup.

Another upcoming project is Tiger Stadium football field renovations, which will start Dec. 1. Maintenance will be cutting down the football field by two feet, rebuilding the drainage and gravel and replacing the turf.

Athletics projects are self-funded and don’t use the University’s maintenance budget, though many don’t realize that the funds are separate. Earlier this year, there was controversy surrounding the new football locker rooms, when some students and faculty were unhappy about the new sports amenities while Middleton Library still had torn furniture and a flooded basement.

Husser said one of the main projects he would like to see funded is the Studio Arts building.

“It’s in very, very poor condition,” Husser said. “We’re hopeful the state will provide the rest of the money for the renovations.”

Millican is passionate about building a new library in a more convenient location for students. The plan for the new library is to relocate near the T-33 aircraft on South Stadium Drive, to better serve business and engineering students.

Although a new library is something many University faculty have been wanting for years, there are no concrete plans to begin construction. Husser said this leaves Facility Services in a difficult situation, since the library is in need of renovation but they don’t want to invest money in a structure that may soon be rebuilt.

“We could create more comfortable spaces for studying individually or collaboratively, and add features that students use heavily, like power outlets and white boards,” Kelsey said.

Another benefit of the new library would be safety. At the new location, transportation would be able to retrieve students from the door instead of making them walk to a pick-up point. Right now, there’s no way for a vehicle to get close to Middleton.

“We know what we want to do, it’s a matter of funding the project,” Husser said.

Several ceiling tiles collapsed in three classrooms in the basement of Lockett Hall on Friday.