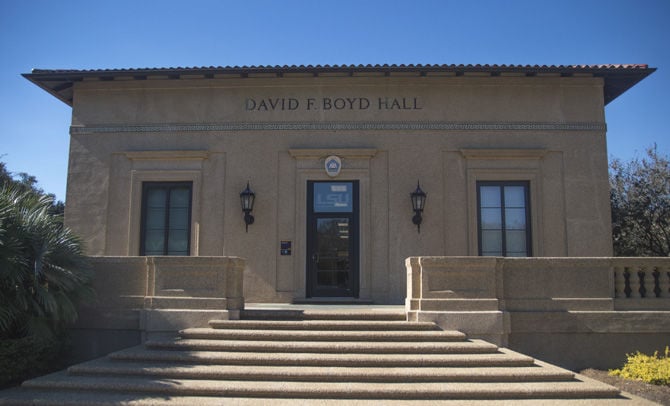 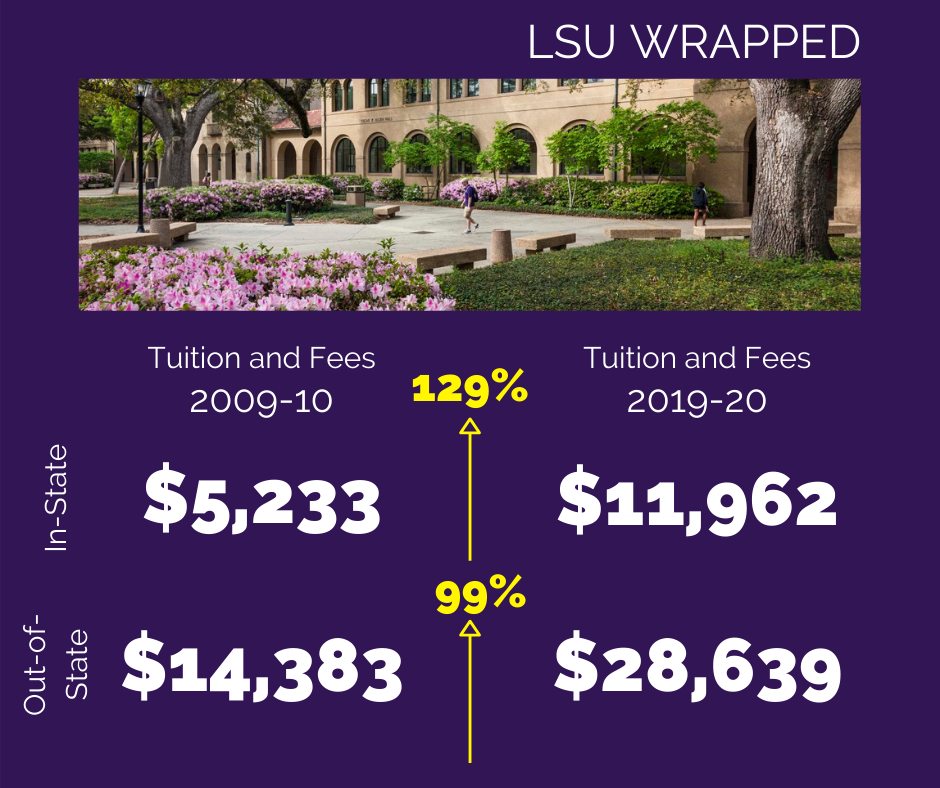 LSU WRAPPED graphic shows the differences in tuition and fees between the 2009-2010 school year and now. Information provided by a report by the Office of Budgeting and Planning. 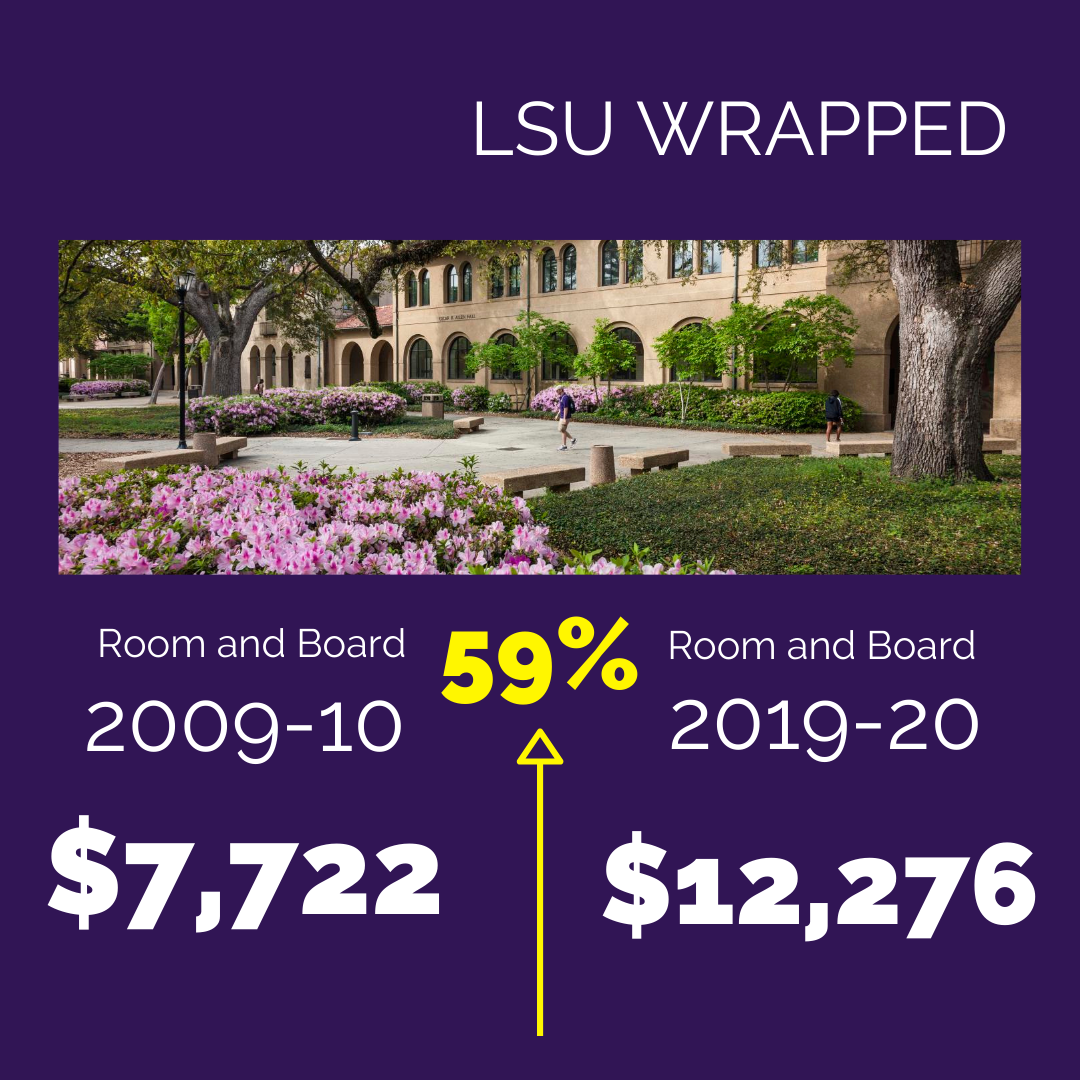 LSU WRAPPED graphic shows the differences in room and board between the 2009-2010 school year and now. Information provided by a report by the LSU Office of Budgeting and Planning.

Many Spotify users look forward to seeing their Spotify Wrapped, a personalized, end-of-year list of statistics for users of the popular music streaming platform. At the beginning of December, Instagram stories are sprinkled with neon green and pink graphics of users’ favorite artists and songs of the year. Spotify users were surprised this past December to also see their Spotify Wrapped report their favorite music over the whole decade, along with how many minutes of music they’ve listened to over the decade and their top genres.

An "LSU Wrapped" recap of some University statistics-- specifically tuition and room and board-- over the last decade are much more grim.

There have been substantial increases in tuition amounts across the country, according to a 2019 College Board report. The average public four-year institution has seen its tuition rise from $8,420 in the 2009-2010 academic year to $10,440 in the 2019-2020 academic year. These tuition hikes have led to a national student loan debt crisis; graduating students from the LSU class of 2017 alone garnered an average $24,933 in student loan debt.

Communication studies graduate student Anna Sable-Campbell has collected about $29,000 in debt between undergraduate and graduate studies at the University. She's paid $1,120 of her loans so far, but garnered an extra $500 on the bill due to interest.

“To have very little money anyways,” said Campbell, “and then giving that little money you have back and not seeing it actually pay off is really infuriating.”

Causes for such sharp increases in tuition-- besides inflation-- likely include increases in the number of college students, expansions in financial aid programs and higher teacher salaries.

The main influence behind rising costs of tuition is simply that more people want to earn a college degree than ever seen before. The job market for a high school graduate is highly limited, and receiving a postsecondary education provides more security in the job market, according to the U.S. Bureau of Labor Statistics.

Drastic increases in demand for a bachelor’s degree naturally leads to price increases in order to accommodate increased housing, classrooms and supplies.

With increases in student enrollment also came increases in financial aid opportunities since the passage of the Middle Income Student Assistance Act in 1978, which provides all students with subsidized loan options and Pell Grants for certain qualifying students.

Some theorists subscribe to the Bennett Hypothesis, which says that as government-funded financial aid increases, so does university tuition so that schools may usurp those government funds for themselves.

While this is only a theory, many studies indicate that it could be true. A study by the Federal Reserve Bank of New York determined that for every new dollar of federal student aid, tuition increases by anywhere between 35 and 65 cents.

But where does this usurped money go? Often, it goes toward paying hefty job salaries.

Universities not only grow and develop for the sake of accommodating higher student enrollments, but also to appeal to prospective students and professors against other competitive schools. One of these incentives for recruiting professors and administrators, of course, is salary.

Professors earned an average salary of $126,609 last year at the University, according to the Office of Budgeting and Planning. However, there are many professors who make well over that amount, like LSU Foundation James C. Bolton Distinguished Professor of Chemistry Kevin Smith, who earned $271,179 as the highest-paid professor in 2018.

Athletic coaches dominate the list of the University’s highest paid employees with nine of the 10 highest budgeted salaries.

The University spends a total of $259,985,480 on salaries alone. If it were only students paying for these salaries, every undergraduate student would have to pay $10,251.29 in order to cover that bill.

The Louisiana state government appropriates about $797 million toward higher education, and about $500 million of that goes toward campuses. Most institutional budgets only have about a third of their budget covered by the state government, according to The Advocate.

Luckily for in-state students, tuition is partially paid for by the state government’s Taylor Opportunity Program for Students, which covers up to $7,462.98 per year for students with qualifying high school GPAs and standardized test scores.

If a student isn't from Louisiana or did not meet the requirements for this program, the options are typically limited to one: student loans.

“It’s always looming above everything I do,” said Campbell. “They’re creating a generation of students that are going to have no means of ever being financially stable.”

There are many careers that are impossible to pursue without a college degree, and yet the return on investment for these degrees are diminishing every year while plaguing students with the curse of student debt.