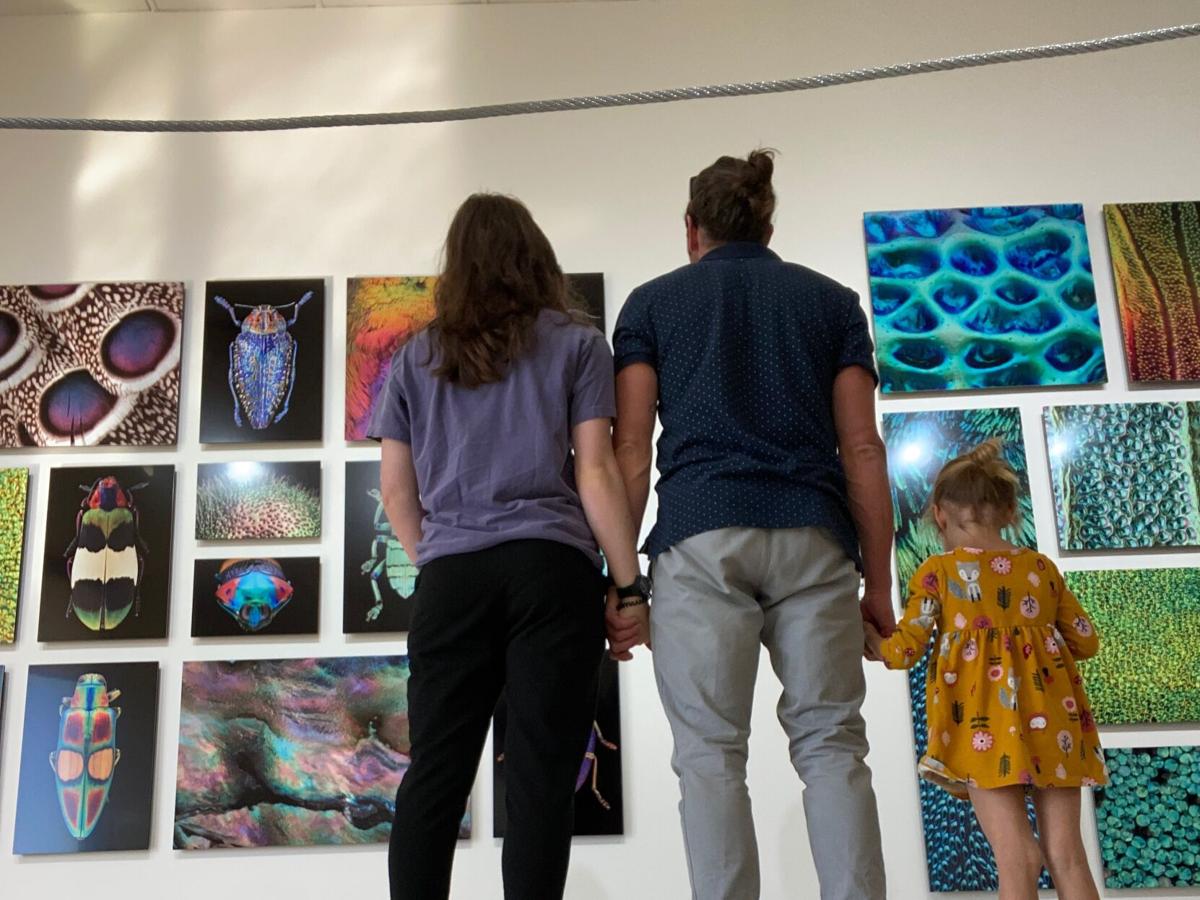 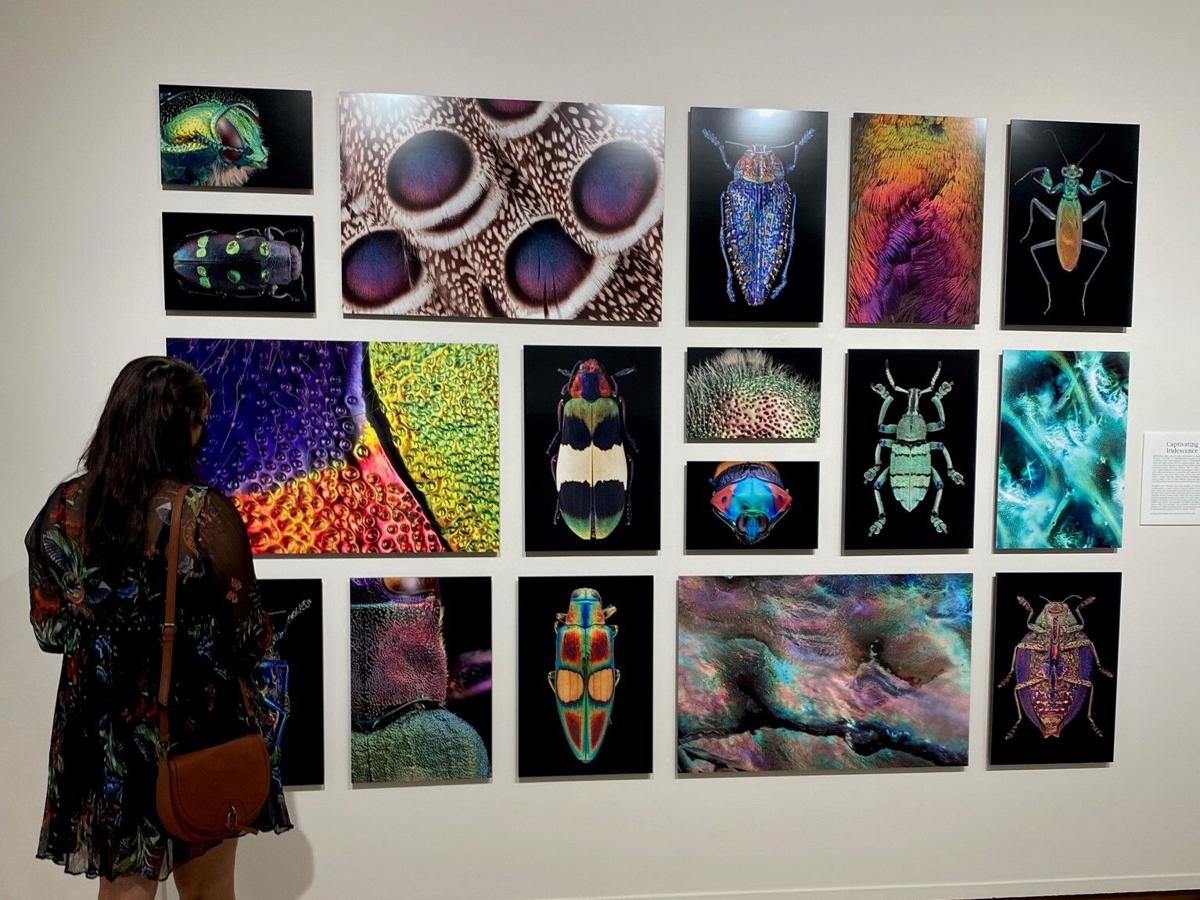 A new exhibit at the Louisiana Art and Science Museum, featuring research from assistant professor of entomology Nathan Lord, seeks to bridge the gap between the worlds of art and science.

The exhibit, "Iridescence," expands on Lord and his students’ work in LSU’s Entomology Department studying the Emerald Ash Borer, whose unique green color has given them the nickname of Jewel Beetle. Jewel Beetles are colored by the exhibit’s titular iridescence, a rainbowlike optical illusion caused by the refraction of light waves.

“The color changes as the receiver of the light changes angles,” Lord said. “That’s what makes these structures so brilliant. You see it in bird feathers, shells, precious stones like opal, in soup bubbles and oil slicks. There’s tons of examples of iridescence in nature.”

"Iridescence is unique from most color found in nature, originating primarily from a phenomenon known as structural color," Able Chow, a PhD candidate working in Lord’s lab said.

An example of artificial structural color would be the surface of a CD, Chow described.

“The color doesn’t come from the chemical property of the object [like pigmentary colors] but its physical properties,” Chow said. “An iridescent object has a very specific pattern that is small enough that it interacts with different wavelengths of light. It’s synonymous with iridescence.”

For its yearlong run at LASM starting July 2021, Lord’s exhibit seeks to showcase both the natural phenomenon and the artistic applications of iridescence.

The exhibition, featured in LASM’s second floor gallery and Soulcon gallery, consists of artistic representations of iridescence from local, national and international artists showcased alongside the lab’s work cataloging Jewel Beetles and other iridescent beetles, with both magnified photographs and real insects from their field work.

“It includes a custom built, period specific, Victorian dress from faculty members at the Department of Textiles, Apparel and Merchandising adorned with Jewel Beetle wings,” Lord said. “It also includes a very special LSU football helmet that has been loaned by the athletics department, which is a special, purple iridescent version that was used only once in 2018.”

The artists included in the exhibit utilize a range of mediums, including photography, sculpture and painting, all tied together by a showcase of “iridescence in some form or fashion,” Lord said.

Pieces like Jennifer Robison’s amalgamation of a photograph and 97 iridescent butterflies, and Christopher Marley’s collages of iridescent insects makes “the visitors stop and appreciate the life, beauty and contributions of these specimens,” LASM curator Lexi Adams said.

“It really just stops people in their tracks wondering ‘Are the butterflies real? Are they alive? How did the artist do this?’ There’s just so many talking points,” Adams said. “What really makes art special to me is when our visitors latch on to it and connect to it.”

This expansion outside of Lord’s work in his lab into the realm of art is what attracted Adams to the exhibition as early as 2019.

“It was a perfect fit for LASM because he was proposing an exhibition that dealt with the scientific principles of iridescence through an artistic lens,” Adams said. “At LASM, those are our favorite subjects, finding the art in science.”

One of the artists showcased, England’s Franziska Schenk, utilized a scientific approach to create iridescent paintings.

“Her work is scientifically developed. She spent years experimenting and working with a team of scientists to create truly iridescent paint that changes color and disappears and reappears depending on the light,” Adams said. “The color changes as you move around the work, creating this interactive, iridescent painting that’s one of a kind.”

Through her time in Lord’s lab and working on the exhibit, Master’s student Sierra Weir wanted to raise awareness for this convergence of the arts and sciences that the exhibit is attempting to cultivate, specifically in the way people learn.

“We haven’t really talked about the scientific aspects of art or how beautiful science can be,” Weir said. “Utilizing the science that we are doing and its natural beauty, we can raise awareness for science through a different form of education that’s engaging and really gets people involved beyond the aesthetics.”

The exhibit has also allowed both museum visitors and the contributors to look at the world through a new lens, divorced from the pigmented world, Chow said.

“It raises a lot of questions about how these colors are produced and why they’re there and who they’re for. Us as humans are unintended receivers,” Chow said. “The very first time a lot of these people see this, they encounter this curiosity of ‘I want to know more about this.’ For a lot of people, this is the first time they are able to ask these questions and look further in.”

Lord said wanted to emphasize the beauty found within the intersection of art and science with the exhibit, despite starting off studying a “less desirable organism” like beetles.

“What is not lost on, that is often lost on many people that are not in science, is that nature does have this profound beauty,” Lord said.

Showers in the morning, then cloudy in the afternoon. Thunder possible. High 56F. Winds light and variable. Chance of rain 40%.

Cloudy skies early followed by scattered showers and thunderstorms later during the night. Low 69F. Winds SSW at 5 to 10 mph. Chance of rain 40%.