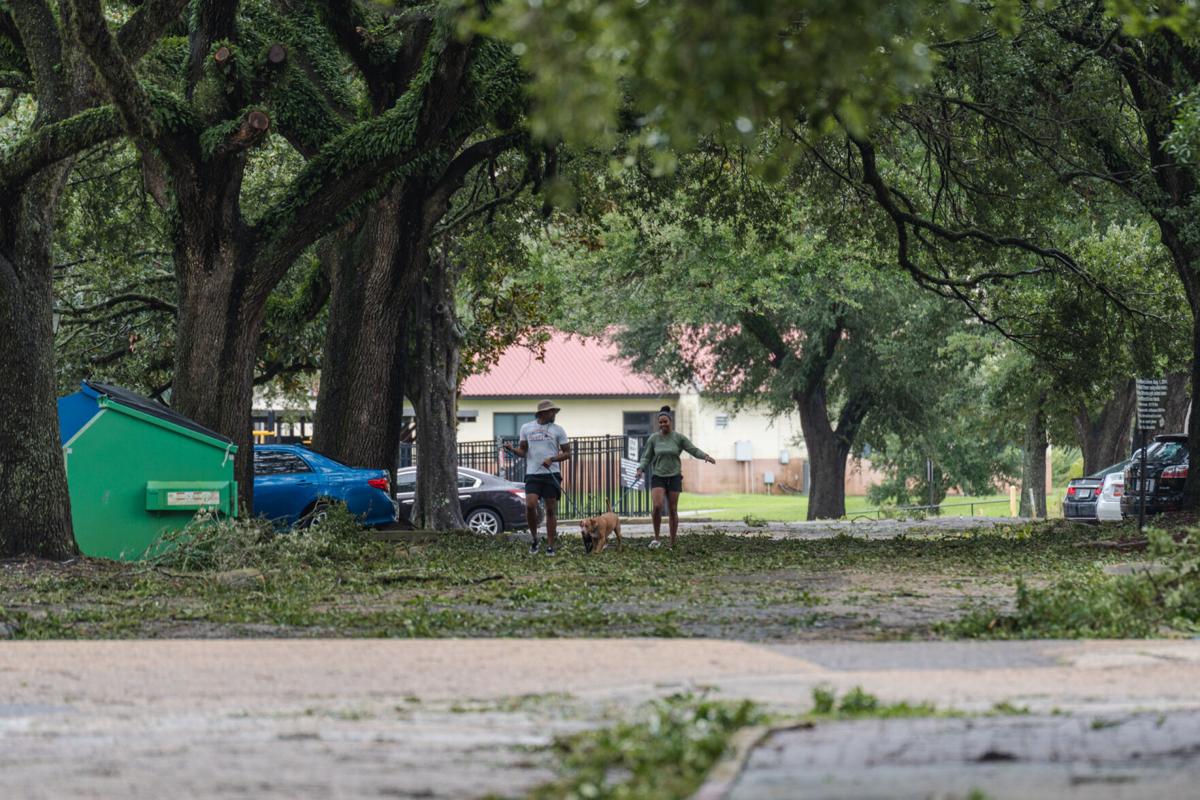 A man and woman walk their dogs among hurricane debris Monday, Aug. 30, 2021, the morning after Hurricane Ida struck Southern Louisiana, near the East Campus Apartments on Veterans Drive. 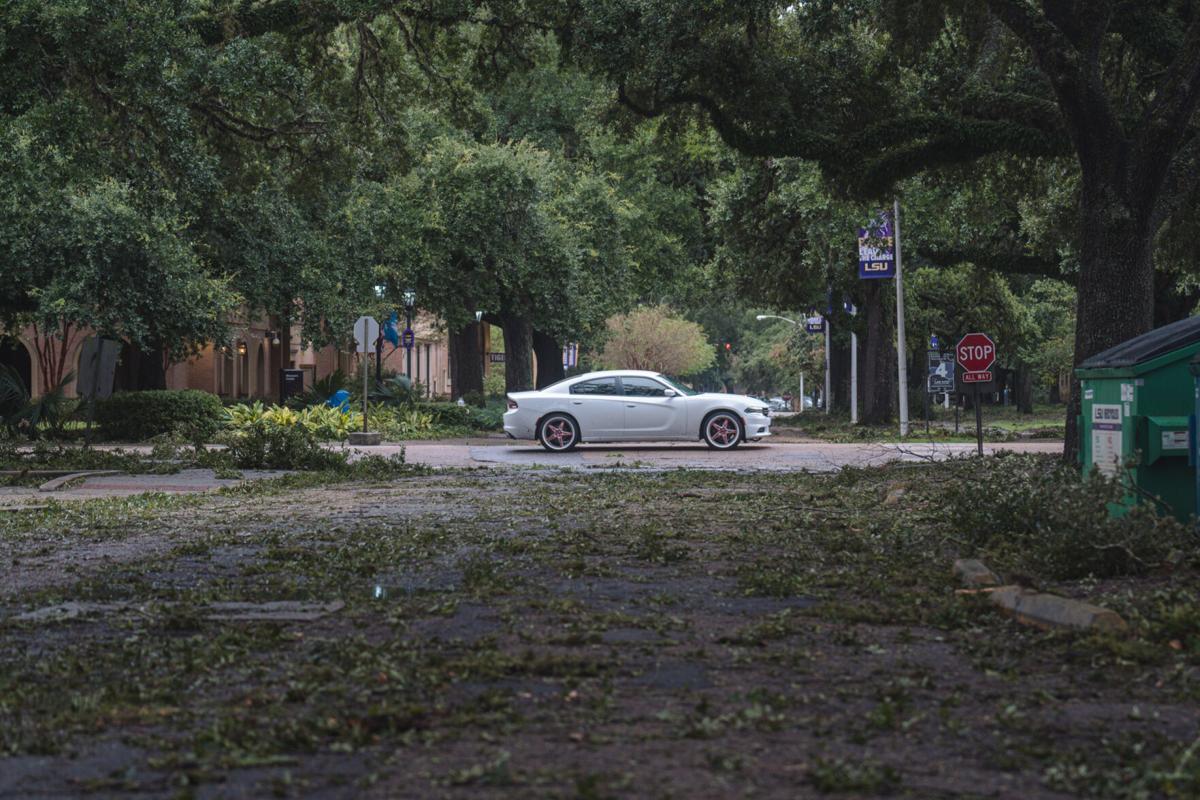 A car passes by Monday, Aug. 30, 2021, a leaf and branch filled street the morning after Hurricane Ida struck Southern Louisiana near the East Campus Apartments on Veterans Drive.

A man and woman walk their dogs among hurricane debris Monday, Aug. 30, 2021, the morning after Hurricane Ida struck Southern Louisiana, near the East Campus Apartments on Veterans Drive.

A car passes by Monday, Aug. 30, 2021, a leaf and branch filled street the morning after Hurricane Ida struck Southern Louisiana near the East Campus Apartments on Veterans Drive.

After week one of classes, out-of-state freshmen found themselves experiencing a less-than-warm welcome to Louisiana: the arrival of Hurricane Ida. For some who resided outside the Gulf or Atlantic coasts, the storm – ranked as one of the most powerful to ever hit the U.S. – was their first hurricane they’d ever experienced.

With nowhere to evacuate, the students felt stranded, hours from home.

Ida, a Category 4 hurricane, was the first to make landfall in the 2021 season with sustained winds of up to 150 mph. Though LSU was spared for the most part from weeks-long power outages and building damages, the preparations took many freshmen by surprise.

‘No clue what was going on’

Mechanical engineering freshman Keleigh Knowles had never experienced a hurricane in her home state of Michigan. She stayed with another Michigan native and a student from Illinois, so no one in her party had braced for hurricane winds before.

"It was the three midwestern kids who had no clue what was going on," Knowles said.

The three students huddled in a small Taylor Hall dorm room that afternoon on Aug. 29, supplied with food and cases of water by the The Five dining hall. They decided to stick out the hurricane together, so they weren't alone.

Her friend shared that it was better to be on the west side of a hurricane, so Knowles said she was hopeful the Pentagon Community wouldn’t be hit too hard.

The wind blew weaker than expected, and she saw students run to play basketball on the Pentagon Activity Center's court after losing power.

‘My first hurricane… is one category less than Katrina’

Biology freshman Tristan Norwood's home state is California. After hearing that Ida was upgraded from a tropical storm to a Category 4 hurricane, Norwood remembered thinking, "My first hurricane that I'm about to go through is one category less than Katrina."

What stuck out most for Norwood, though, didn’t happen during the tour Ida took through campus -- it was the eerie, quiet and familiar chill before the storm began.

"There was nothing wrong with [the weather]. If anything, it was beautiful, but it was too beautiful," Norwood said. "The temperature and the air felt like what it was like in California before I left. Out of the entire two weeks I had been here, I had never felt this cool of air. That's what threw me off."

"It was rough not having AC," Frey said. "Definitely had to change the sheets."

During the second day without electricity, LSU gave him and the rest of the dorm's residents access to other dormitories to charge their devices in lobbies and study rooms.

Frey’s only hurricane education came from television shows and movies -- he was shocked to see the empty parking lots considering the hassle of finding an empty spot only days earlier.

"I didn't really know it was going to be as bad as it was until it was too late, and going home would've taken 20 hours," Frey said, mentioning that his parents constantly called him to ensure he was okay. "My roommate wanted the blinds down. I said 'no, we're watching it.’”

He passed the hours by checking anonymous chat app YikYak and watching Netflix. Looking out of his window at one point, he saw people outside playing football and spikeball in the rain.

‘It was hard managing time’

General business freshman Jacob DiPane, from Colorado, said he had to evacuate to Oxford, Mississippi. His family was “terrified” and wanted him to go further north to Tennessee. He ended up staying in Mississippi and hoping for the best.

DiPane said the hurricane made his transition to college more difficult as he’s had to learn new software programs required by his courses while dealing with extended power outages and sparse internet service.

“It’s been a little confusing,” DiPane said. “We went to the first week of classes and started to get into a rhythm and then we got a whole week off.”

General business freshman Avery Krautsack, an Illinois native, shared the same sentiment, saying the workload after the hurricane was also a challenge when transitioning to college. He said after a whole week being off school, he had two weeks worth of work when school resumed.

“It was hard managing time with everything else going on in life,” Krautsack said.

‘It threw things on a loop’

Freshmen interested in pursuing Greek Life, like finance freshmen Emma Woodruff, had to juggle the added course load caused by the university’s weeklong closure along with an extra week of Greek recruitment, which had been delayed by Ida.

“[Adjusting to college] was kind of difficult,” finance freshman Emma Woodruff said. “I thought I was getting the hang of things then the hurricane hit and it threw things on a loop.”

Woodruff said she thought the recruitment process would be over by now and that she would be able to start getting involved with her sorority at this point in the school year, but the hurricane delayed sororities’ Bid Day until Sept. 12.

“My rush experience was good until the hurricane,” Woodruff said. “It prolonged things more than I thought.”

Woodruff, who’s originally from Texas, said she was better able to handle her academic transition because she went to a big high school, which prepared her for the type of environment she’s experiencing now at LSU.

Though the hurricane seemed to spare much of LSU and the greater Baton Rouge area from damages after veering toward Livingston Parish in the hours before landfall, areas such as Grand Isle, Houma and Denham Springs bore the brunt of Ida’s catastrophic winds and rainfall, with power being out for weeks and homes being decimated during heat indexes of over 100 degrees Fahrenheit.

Beyond Louisiana, Hurricane Ida caused flash flooding in Northeastern states like New York and New Jersey that has killed at least 44 people as of Sept. 2, according to Reuters, with flooding ranging from a few inches to multiple feet throughout the region.