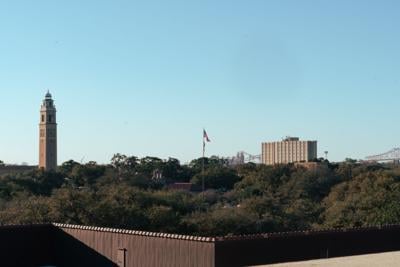 This school year proved to be unprecedented due to an array of events with national significance and coverage occurring on and around LSU's campus.

There were 1,562 COVID-19 cases in the fall and 693 in the spring semester, according to the COVID-19 Reporting Dashboard. In the spring, the University administered over 10,000 COVID-19 tests. Since March 2020, the University reported that 6,478 students and 3,488 employees said they received vaccines.

The University began administering vaccines in March at Tiger Stadium. The state supplied LSU with Johnson & Johnson vaccines. Galligan announced in April that LSU could not require students to receive vaccines in order to attend LSU, but some faculty members called for LSU to rethink that decision.

Classes were held in person, in a hybrid format and fully online. According to the University, one-third of classes occurred in each format.

Operating amid a pandemic brought many changes to the lives of those within the LSU community.  Mardi Gras break and spring break were canceled and replaced with various one-day breaks throughout the semester, but these breaks were also taken away after school was canceled for a week in January after a winter storm hit Baton Rouge.

In November, USA Today released an article that outlined several instances of victims of sexual assault at LSU and their difficulties with the Title IX reporting process at the University. After this article, LSU students marched in protest of the University’s mishandlings of sexual assault. The article found that some LSU administrators were aware of the assaults, but did not take the appropriate action in reporting it.

The Department of Education opened two investigations into LSU’s Title IX practices. The first was announced in February and is an investigation into LSU’s transparency in reporting crimes and sexual violence that occur on campus. The second investigation will examine Title IX cases over the past three academic years and will be conducted similarly to Husch Blackwell's investigation.

The Louisiana Select Committee on Women and Children held legislative hearings ahead of the 2021 legislative session beginning in the spring. Students spoke at the hearings about the culture they experience on campus. During the first hearing, victims identified themselves and spoke out against LSU and its Title IX reporting processes.

Interim President Thomas Galligan and members of the administration pledged to work toward all of the 18 recommendations. Galligan said the University has a plan to complete 47 action items in response to the recommendations. LSU recently announced the Title IX office would be revamped and combined with the Office of Civil Rights to create a new office.

The LSU Board of Supervisors announced that a Presidential Search Committee would be formed in October. The 20-person committee met several times throughout the year and supported a unified president position instead of a chancellor and president leading the University system. The committee hired Parker Executive Search Firm to conduct the firm in November.

Students and the LSU community were able to participate in the search through interviews detailing what they hope to see in a permanent president. In December, Ausberry voluntarily withdrew from his position on the committee amid backlash he faced in his role in the mishandling of Title IX reports on campus.

Interim President Thomas Galligan has served in the interim role since January 2020, and said multiple times throughout the semester that he would apply for the permanent role. He changed his mind in April 2021, citing “personal and professional considerations.” He said he will remain in the role until the University completes its search for a permanent president, but he plans to return to his previous role at the Law School.

On April 21, the committee met and released the list of applicants who are vying for the position.

Multiple student deaths occurred this year, including the two most recent deaths in April.

LSU freshman Kori Gauthier went missing in April after her vehicle was struck by another vehicle. The vehicle had been abandoned for an hour prior to the accident, and police only found her cell phone and wallet inside the car. On April 14, law enforcement officials confirmed that Gauthier’s body was found in the Mississippi River.

Greek Life held virtual recruitment in the summer amid COVID-19 restrictions. Greek life members were still allowed to live in the Greek houses, but masks had to be worn in common spaces and other precautions were taken to prevent the spread of COVID-19.

LSU suspended all activities for its chapter of Phi Kappa Psi fraternity after a night of partying on Oct. 19 ended in a new member’s hospitalization. The new member was drinking at an off-campus gathering but had returned to a female student’s off-campus apartment before some fraternity brothers saw he needed assistance.

Sororities and fraternities held some events amid the pandemic, including Songfest and the Miss LSU pageant, but mitigation efforts were enforced.

In January, LSUPD investigated the LSU chapter of Kappa Alpha Order after a noose was found inside the fraternity house.

LSU placed Kappa Sigma on suspension over allegations that the fraternity hazed its pledges, violated COVID-19 protocols and served alcohol to minors.

Scattered thunderstorms in the morning, then mainly cloudy during the afternoon with thunderstorms likely. High near 90F. Winds SSE at 5 to 10 mph. Chance of rain 70%.

A few clouds. A stray shower or thunderstorm is possible. Low 73F. Winds light and variable.

Scattered showers and thunderstorms. High around 90F. Winds S at 5 to 10 mph. Chance of rain 60%.

A few clouds. A stray shower or thunderstorm is possible. Low 73F. Winds light and variable.