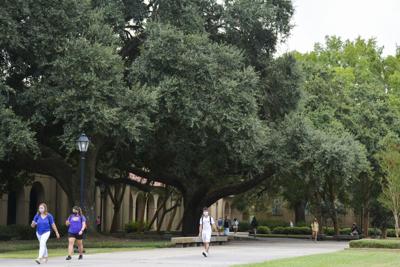 LSU suspended all activities for its chapter of Phi Kappa Psi fraternity after a night of partying on Oct. 19 ended in a new member’s hospitalization.

The new member was drinking at an off-campus gathering but had returned to a female student’s off-campus apartment before some fraternity brothers saw he needed assistance. The brothers then brought him to Baton Rouge General Medical Center.

The female student died by suicide a few hours after the new member was hospitalized for severe alcohol poisoning. The new member has since been released from the hospital.

On Nov. 2, Phi Kappa Psi new member educator and political science student Terry Pat Reynolds II was arrested on counts of felony and misdemeanor criminal hazing, along with failure to seek assistance. He was released the same day on a $13,500 bond.

The incident came as a shock to many students who still vividly recall the death of Max Gruver in 2017, but it wasn’t the first time Phi Kappa Psi faced hazing allegations.

Just last month, a new member reported coercive behavior through the LSU Division of Student Affairs website. The student, who requested anonymity in the report, said he was required to participate in strenuous workouts at an off-campus location and was hit in the head with a baseball bat.

This was part of a recurring event known as a “pizza party,” in which new members were routinely subjected to demanding physical activities without air conditioning, according to the report. The incident occurred on Sept. 13 and was reported to LSUPD the next day.

The fraternity’s “pizza parties” hold an eerie resemblance to Phi Delta Theta’s “Bible studies,” where members were quizzed on fraternity history and forced to take drinks of Diesel, a 190-proof liquor, when they answered incorrectly. It was at one of these “Bible studies” where LSU freshman and Phi Delta Theta pledge Max Gruver died of alcohol poisoning in 2017.

In Max Gruver’s case, the heavy drinking was enforced by new member educator Matthew Naquin, who was ultimately convicted of negligent homicide and sentenced to five years in prison with two and a half years suspended.

The similarities surrounding these two instances were not lost on Max Gruver’s mother, Rae Ann Gruver.

“It’s the same thing that happened with Max,” Rae Ann said. “Just that forced alcohol consumption, and having too much too fast.”

Reynolds sent a group text to 62 new members the night of the incident instructing them to “get over to my place,” and adding, “hope you’re ready to get hammered if you pull up,” according to the arrest report. Once at the house, new members were instructed to consume large amounts of alcohol and were not allowed to leave until they finished their bottles.

“The defendant would then retrieve more alcohol for them to consume because they did not finish the previous bottle fast enough,” the report said. “This behavior went on until multiple bottles and cans of alcohol were consumed by the new members.”

“I’m so glad someone took him [the new member] to the hospital, thank God, because in Max’s cases they didn’t,” Rae Ann said. “Even though they knew Max was in trouble and having serious problems.”

The University implemented a number of anti-hazing measures since Max Gruver’s death three years ago, including mandatory hazing prevention modules for all student organizations and medical amnesty granted to those who seek help in emergency situations. The Max Gruver Act passed by the Louisiana Legislature in 2018 also instituted state-wide hazing definitions, penalties and prevention education.

Despite these efforts, hazing is still an ongoing force at LSU.

“I’m speechless,” Rae Ann said. “What’s gone wrong? What’s not getting through to LSU’s Greek culture, that something’s got to change and that hazing’s got to end?”

"This case looks unbelievably similar to the Gruver case,” Moore said. “There are a lot of parallels, with one exception: Everyone who has been questioned so far is cooperating with the investigation. We simply want to know what happened in order to take the appropriate actions."

As a result of Max Gruver’s death, LSU Greek Life was temporarily suspended and Phi Delta Theta was banned until 2033. While Phi Psi is currently under investigation and on interim suspension, the rest of LSU’s Greek community remains unaltered.

“It makes you wonder, why hasn’t Greek Life been suspended while they go in and do these investigations on all the chapters? Something needs to happen, and it needs to happen big,” Rae Ann said. “And I don’t mean somebody dying, I mean the University taking the reins and doing something before somebody actually dies again.”

In addition to the September hazing allegation, Phi Psi faced two complaints in 2017.

LSUPD shut down an unsanctioned Phi Psi party in 2017 after staff reported it involved alcohol. In October of that same year, a complaint from a pledge’s sister alleged that the new member was dealing with verbal assault, last minute requirements by older members and lack of sleep due to having late-night obligations.

“What is called 'hell' week is coming up. My brother is a nervous wreck and so am I. He is terrified of speaking out and has not even told me,” the anonymous report read.

It is unclear what steps the University took to address this report, which was filed a few weeks after Max Gruver’s death.

Just last year, the LSU chapter of Delta Kappa Epsilon was closed after findings of a hazing investigation. Nine members were arrested for hazing offenses ranging from pouring gasoline on new members, kicking them with steel-toed boots, beating them with a metal pipe, burning them with cigarettes and ordering them to lie face down on a basketball court covered in broken glass while being urinated on.

Rae Ann was initially encouraged by the strong response to the DKE allegations, but now thinks the University has taken “two steps backward.”

“It was showing that ‘hey, you are going to get arrested if you are hazing,'” Rae Ann said. “For this Phi Psi group to then do this hazing. . . it’s like, what are you not believing about the law?”

Another LSU fraternity, Sigma Phi Epsilon, is currently under investigation for an incident on Oct. 3. The online complaint filed Oct. 14 was from a third party alleging physical and alcohol related abuse during a game day event.

Media Relations Director Ernie Ballard said the University was investigating this incident as well as the recent activities of Phi Kappa Psi. He also confirmed that a hazing complaint made against Kappa Sigma in September was unfounded.

“The University has stated on multiple occasions that hazing will not be tolerated and the University acts swiftly when any hazing allegations are brought forth,” Ballard said. “Now that the LSU Police investigation has led to an arrest, the University’s office of Student Advocacy & Accountability will also conduct an investigation regarding any possible Student Code of Conduct violations.”

Director of Greek Life Angela Guillory said the Greek Life staff is revisiting health and safety efforts for next year, but this was already in the works prior to recent hazing incidents.

“We are in the initial stages of discussions,” Guillory said. “Hazing prevention will always need to be an ongoing campus-wide initiative. Our office is committed to continue educating the Greek community on this topic.”

Despite the recent hazing crimes on the same campus where her son was killed three years ago, Rae Ann believes national awareness has expanded. Each week, she gets emails from students who were in dangerous overdrinking situations but thought of Max and remembered to call 911. Back in 2017, she said, any conversations surrounding hazing were “hush-hush.”

But, she said the University needs to take immediate, decisive action to prevent another tragedy. Such action could include a temporary suspension of all Greek Life activities while University administration reevaluates the root of extreme hazing.

“The University needs to take a stand and say, ‘we’re not tolerating this,'” Rae Ann said. “They keep saying it, but you’re still tolerating it if you’re not stopping it.

“To me, it’s insulting to Max. That’s exactly how he died or was killed, and this young man did the same exact thing. What did you not learn from what happened three years ago on the same campus?"

Editor's Note: An earlier version of this story said that the settlement dropped Kappa Sigma's hazing charges, when in fact, an April administ…

A few clouds from time to time. Low 74F. Winds light and variable.