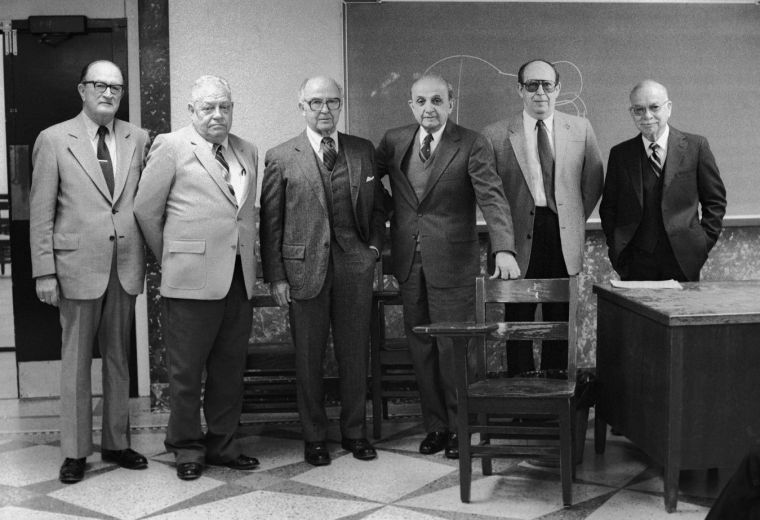 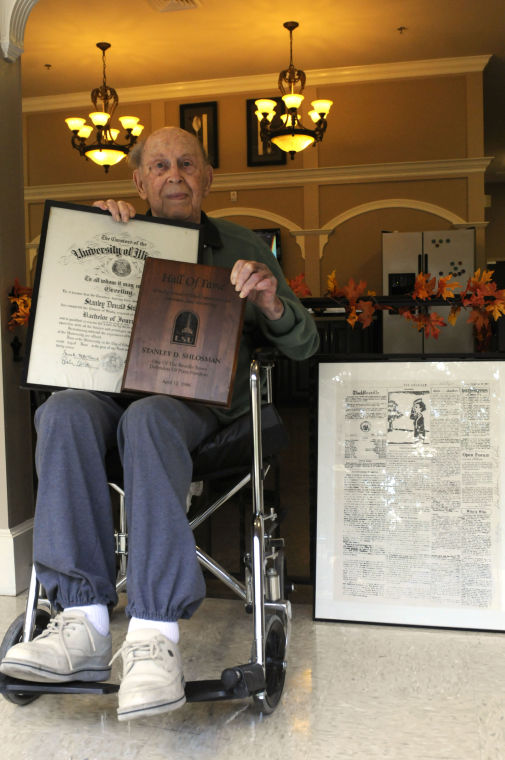 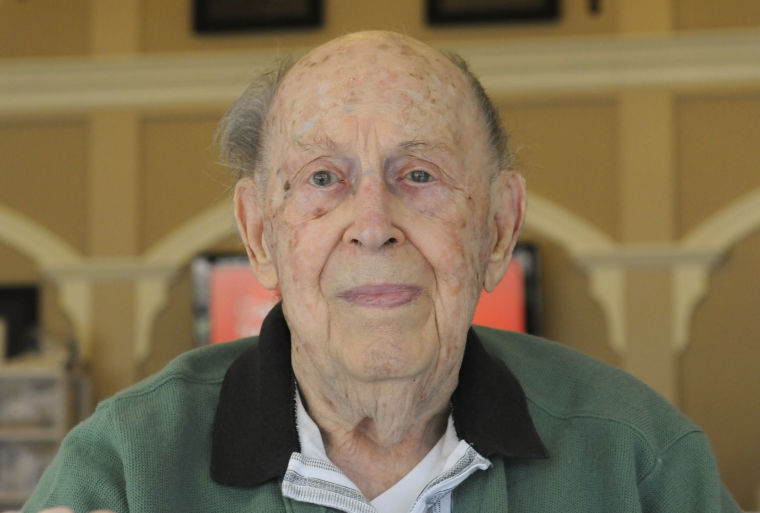 It was 1934. Stanley Shlosman and his best friends were seniors on the cusp of graduating from Louisiana State University.

They were on the staff of The Reveille, LSU’s student newspaper that printed twice a week in those days. Long columns of text stretched across and down each page. The occasional cartoon or photo offered the only relief from the monotonous black-and-white presentation.

The Louisiana State Seal was stamped on each Reveille editorial page, but if any doubts arose about the paper’s loyalty, Huey P. Long, the former governor and, in 1934, a U.S. senator, was glad to clear up the uncertainty. Then-LSU President James Monroe Smith, at Long’s prompt, kicked out of school seven Reveille writers and editors after they ran an anti-Long letter to the editor and refused to accept faculty censorship.

And Stan Shlosman was one of the famous Reveille Seven.

Shlosman, who hit 100 years old this year and lives in a West Monroe nursing home, is one of two members of that nationally known “club” still alive. LSU apologized in 1941, but Shlosman has returned to the University for only two reasons — football games, which attracted him to campus as an incoming freshman, and when LSU invited him back for events such as his Hall of Fame induction and the 50th anniversary of the Reveille Seven’s expulsion.

There is no ambiguity when asked what he remembers about his time at the University.

“We were kicked out of LSU!”

THE REBELS AND THE KINGFISH

Shlosman grew up in Iowa and attended junior college when LSU started growing its football team – ironically, the result of a prompt by The Kingfish, as Long loved to be called. LSU recruited coach Biff Jones, who brought in an assistant from the University of Iowa and several Iowa football players.

The LSU football team recruited one of Shlosman’s buddies in Iowa, so Shlosman followed him south to tutor his friend and keep him eligible.

Shlosman said he wasn’t a superstar at The Reveille, unlike editor Jesse Cutrer, but he wrote numerous articles.

The paper heavily covered the state’s political scene, dominated by Long, who in 1934 decided to mock one of his political rivals, State Sen. J.Y. Sanders Jr. Long’s rival had just won a seat in the U.S. House of Representatives, previously serving in the state Senate.

Long assembled LSU students on Nov. 10, 1934, to poke fun at Sanders by starting a fake campaign to elect his replacement in the state Senate — LSU student and football player Abe Mickal. The event was a farce, but Cutrer signed off to run a letter to the editor in the paper’s Nov. 16 issue. It accused LSU of making a “mockery of constitutional government and democracy.”

“I’ll make ‘em tear it out and run the damn paper over,” Long fumed before calling the LSU president, according to Ronald Garay’s book “The Manship School.”

The Kingfish asked Smith to ensure the paper was reprinted and Cutrer agreed to replace the old version with 4,000 new copies, sans offending letter. State police were enlisted to round up the first version. But Long’s next step sent the staff over the edge.

Smith appointed a local reporter as The Reveille’s adviser, who asked to see page proofs of the next issue. The enraged editorial staff ran a disclaimer saying the paper had been approved by their adviser.

Smith told the editorial staff that the Reveille was not to show the University or its supporters in a bad light, according to Garay. The top four editors quit, one reluctantly — Grace Williamson, the Friday issue editor.

Shlosman was one of 26 students who signed a petition to reinstate the editors. Smith suspended the petitioners and said he would reinstate them if they wrote a letter of apology. Shlosman and three others refused.

Williamson changed her mind and agreed to play by Smith’s rules. She replaced Cutrer as editor. In the Dec. 4 issue, she wrote she had “decided to prove a greater loyalty to my Alma Mater, rather than to a group of students whom I admitted to be in error.”

On Dec. 5, the other seven’s punishments were upgraded from suspension to expulsion.

For Shlosman, it was a devastating blow that coincided with the Great Depression. Nobody had money, he said; it was a tough time, but his parents were supportive.

An anonymous person in New Orleans, who legend holds was a former editor of The Reveille, established a fund from which the students could borrow interest-free money to pay for their education at another university.

Shlosman said the seven students earned scholarships to the University of Missouri. Shlosman graduated in 1936 along with five other Reveille Seven members — Godbold became sick and couldn’t finish college.

Shlosman worked for various newspapers upon graduating, including the Baton Rouge State-Times and the Jackson, Miss., Daily News.

“[Journalism] was a hard, hard way to make a living,” Shlosman said.

He switched careers and spent 30 years working for a fur and pecan business in Monroe. His 66-year-old son, Don, said his dad didn’t talk much about his legacy at LSU, though he always stayed interested in newspapers.

One of Shlosman’s favorite Reveille Seven memories happened years after the gang was expelled, when the paper’s former assistant editor Corbin would get revenge on President Smith, who had expelled him.

Smith later was convicted for forgery, embezzlement, mail fraud and tax evasion. Corbin, by then a professional reporter, jumped on the story.

Shlosman remembered his friend offering Smith this greeting when he saw him next: “I’m Carl Corbin and you dismissed me from LSU and I’m here to interview you.”

In 1941, the LSU Board of Supervisors expunged the dismissal records of the Reveille Seven and sent each student a formal apology. The Board’s resolution said the young men were courageous for not giving up their principles.

The student newspaper, which later became The Daily Reveille, published a banner headline on its front page that proclaimed “Board Exonerates Ex-Students.” The Reveille also ran photos of its predecessors and recounted the full story in the paper for the first time since 1934.

Former University Chancellor James Wharton invited the Reveille Seven back to campus in 1984 for the 50th anniversary of the expulsion. All but McGuire attended. The seven were inducted into the Manship Hall of Fame in 1996.

Upon their return to LSU, the Reveille Seven members met with journalism students and imparted their advice to The Daily Reveille staff. The culture surrounding the paper and campus were vastly different than they were in 1934 — Cutrer’s ‘84 counterpart was Reveille editor Dane Strother, the son of famed political consultant and fellow Manship Hall of Famer Raymond Strother. During his term as editor, the younger Strother sued LSU over a disagreement with the administration 50 years after the Reveille Seven was expelled.

During the 1984 visit, Shlosman advised students to be skeptical that what happened in 1934 could happen again.

“We didn’t start out as student activists,” Corbin was quoted as saying at the time. “The situation came to us and we reacted to it.”

Shlosman remained close friends with his fellow rebels until their deaths. The friends used to meet up once a year in a different location.

“He would look forward to that,” Don Shlosman said.

Corbin died in 2011 in New Orleans. He is the only one of the Reveille Seven who spent most of his life working in newspapers.

The only other living member of the Reveille Seven is Montague, who is 101 years old and lives in Kansas. His memories, sadly, have faded. Montague worked for the Times-Picayune and went on to work for the U.S. Department of Agriculture and then the press office in the American Embassy of Mexico City.

Both in his visits back to LSU and now, in his quiet nursing home, Shlosman sticks with his Reveille brothers.

None of them, he said, had any regrets.

“I had a horrible experience because practically all of us were seniors. It was serious.”

Mostly cloudy in the evening with scattered thunderstorms developing after midnight. Low 69F. Winds SE at 5 to 10 mph. Chance of rain 40%.

Partly cloudy with a slight chance of thunderstorms. Low 71F. Winds ESE at 5 to 10 mph. Chance of rain 30%.