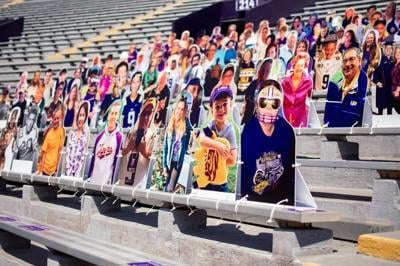 Preserving the spirit and tradition of college football while enforcing pandemic-related precautions continues to be a challenge for LSU and many universities across the nation.

Officials implemented several major changes this year to abide by social distance guidelines. Some fans are frustrated with the changes, while others say it’s not enough.

The University required fans over the age of 18 to complete a CDC Facilities COVID-19 screening online prior to attending the season opener on Sept. 26.

Tiger Stadium is limited to 25% capacity, or roughly 25,580 fans. Students are top priority alongside season-ticket holders this year.

2,500 tickets were allotted to fans as of Sept. 11. Remaining tickets are distributed to season ticket holders, though 73% have opted out this season, and visitors from opposing teams.

'It's not going to be the same': Students weigh in on LSU's new football ticket prioritization system

Students tested for COVID-19 since Aug. 15 are given ticket priority for the entire season at the same rate, regardless of the date of testing.

Interim President Tom Galligan said the priority date may be moved as the season progresses.

“We didn’t make it a requirement,” Galligan said. “We made it a priority. If people choose to get tested, they will be prioritized.”

As of Nov. 5, the priority date remains Aug. 15, with two home games remaining this season.

In addition, the University continues to allocate student tickets with the same distribution system set in place for the 2019 season.

The system provides seniors with 40% of available tickets, juniors with 20%, sophomores with 15% and freshmen and incoming transfer students with 15%. Graduate and professional students receive the remaining 10%.

How LSU lost to Auburn in historically bad fashion

According to LSUSports.net, the athletic department says it will “try” to accommodate students with at least one game of choice due to capacity limits.

The University prohibits students from transferring tickets for the 2020 season.

LSU Athletics Director Scott Woodward said non-students will not be incentivized to get tested, though Galligan said it is encouraged.

Long-time season-ticket holder Shanna Lopez said she does not believe any testing should be required under the right circumstances.

“I don’t think anyone should have to be tested prior to attending the game if they have allowed for social distancing,” Lopez said. “With that being said, if they required a test to attend I would comply.”

'It was just miscommunication:' How a 99-yard drive erased defensive progress, defeated LSU

The University of Texas at Austin was scheduled to face LSU in Tiger Stadium this fall before the SEC announced a conference-only schedule.

The Longhorns, a member of the Big-12 Conference, adopted a similar ticket distribution system.

Students who attended the Longhorns’ football season opener on Sept. 12 were required to take a complementary, but mandatory, rapid COVID-19 test on Sept. 11. Those with negative results received their tickets online.

Similar to LSU’s current policy, non-students and opposing team visitors are not required to be tested and stadium capacity is reduced to 25%.

Despite the university’s precautions, UT Austin pre-med senior Monica Narvaez said she has no plans to cheer on the Longhorns in Texas Memorial Stadium this season.

“It just didn’t seem like a good idea to begin with knowing the culture of how games go,” Narvaez said. “I didn’t see it as reasonable to buy tickets for games not knowing how this pandemic is going to play out.”

Narvaez said she enjoyed watching the game from home, but she has her concerns about the student section.

“When I watched the first home game, you could see all the students piled up in the student section,” Narvaez said. “At least that’s what I looked like, so, really it didn’t seem that proactive.

SEC Commissioner Greg Sankey said he believes some teams have done well with the new regulations, while others “need improvement.”

A spike in positive cases caused the University of Florida to postpone its matchup with LSU originally scheduled for Oct. 17. The Gators will take on the Tigers on Dec. 12, according to the SEC.

The SEC requires its members to follow many of the same guidelines. Sankey said schools can face up to a $1 million penalty, at $100,000 per violation.

Sankey did not comment on which schools have been fined thus far, though sources told Sports Illustrated that Tennessee, Ole Miss and Texas A&M were the culprits.

Ole Miss allotted 2,500 seats for students per home game. Students and other spectators are not required to take COVID-19 tests to qualify for entry but social distancing and face coverings are required.

Vanderbilt is the only SEC member that banned fans from the stadium for its season opener.

Pooja Naik, a master of public health candidate at Emory’s Rollins School of Public Health, told USA Today the rate of COVID-19 infections has “declined drastically” in SEC counties, though she is still concerned about such large gatherings in “the same air space.”

“We need to understand that numbers going down does not necessarily give us a green signal to stop social distancing and stop using masks,” Naik said. “It wouldn’t be surprising to see a completely different picture from our data next week.”

Interior design senior Lindsay Wipperling said she hopes fans choose to get tested. She remains optimistic about the season.

“COVID-19 is still pretty new to us,” Wipperling said. “We’re doing the best with what we’ve got. I’m still excited. This is just the new norm, and we’re still navigating our way through it.”

'We want to play Alabama': Amid chaotic pandemic-fueled season, LSU football forges ahead

LSU football had a practice fit for the times on Tuesday.

Cloudy with periods of rain. Thunder possible. Low 59F. Winds ENE at 5 to 10 mph. Chance of rain 90%. Rainfall possibly over one inch.