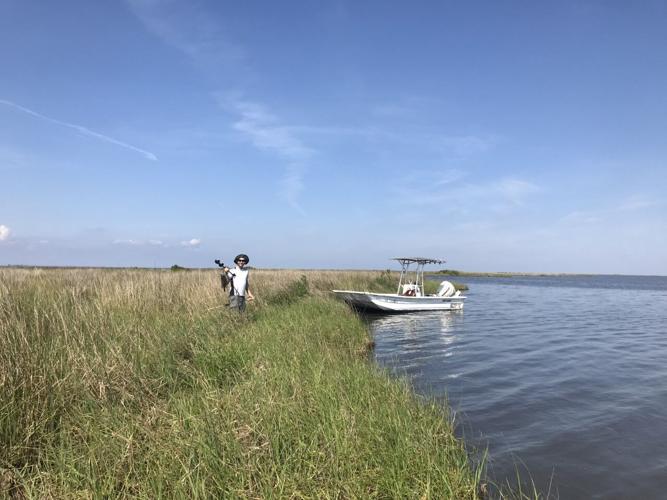 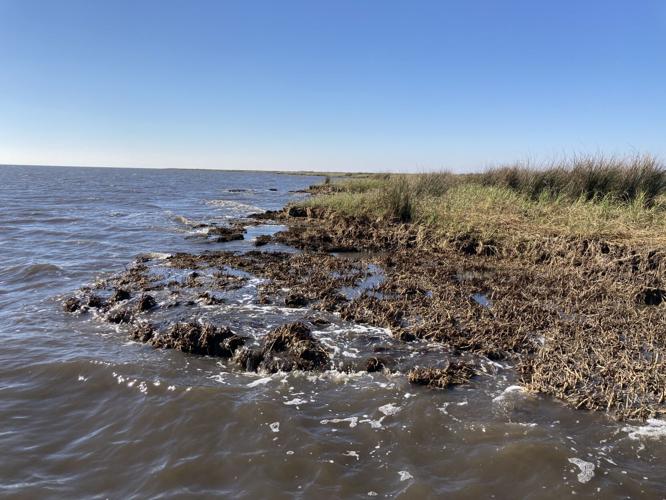 Erosion of up to 10 feet of marsh in Barataria Bay after Hurricane Zeta made a direct hit on the Bay.

Erosion of up to 10 feet of marsh in Barataria Bay after Hurricane Zeta made a direct hit on the Bay.

In January 2016, the Department of Housing and Urban Development announced grants to help communities around the U.S. adapt to sea-level rise by building levees, dams and stronger drainage systems, according to the New York Times.

One of the communities targeted by the grants was Isle de Jean Charles, a narrow strip of land in Terrebonne Parish. Officials decided that there was no realistic path for the community to protect what little land was left from coastal erosion, which has been caused by reduced sediment flow in the Mississippi River Delta, subsidence and sea-level rise, consuming 1,900 square miles of Louisiana’s coast since 1930.

The community received $48 million to resettle its roughly 60 residents, many of whom belonged to the recognized tribe of the Isle de Jean Charles Band of Biloxi-Chitimacha-Choctaw Indians.

Currently, Louisiana has 955,000 people at risk of coastal flooding. By 2050, an additional 262,000 people are projected to be at risk, according to statesatrisk.org. Places such as Grand Isle, Plaquemines Parish and Port Sulphur are in danger of producing the next American climate refugees within the next century.

Additionally, over $103 billion in assets regarding oil and gas infrastructure, not only a crucial revenue source for the state but for the entire country, will be at risk, the Louisiana Coastal Restoration Project reported.

There are over 200 faculty members at LSU working on Louisiana’s coastal problems and many of them see much of Louisiana’s coast disappearing as a matter of when, not if. Louisiana loses a football field of land every hour, or 16 square miles per year, according to Scientific American.

The state’s relative sea-level rise, which is about 10.4 millimeters per year, is three to four times the Gulf of Mexico average.

“Louisiana has the sea-level rise today that most of the other coasts are probably going to have in about 50-75 years,” professor and associate dean of research in LSU’s College of Coast and Environment John White said. “We should be starting to see most of the problems ahead of everyone else because we’re ahead of them in time if you want to think of it that way. What happens here is going to happen everywhere else unless we do something.”

Although sea-level rise is a major factor in Louisiana’s disappearing coast, even if sea-levels remained stable, Louisiana would still be sinking.

After a destructive flood in 1927, Louisiana began building levees along the Mississippi River to protect communities in case of another flood. However, the levees restricted the Mississippi River Delta from replenishing its sediment deposits, resulting in a significant loss of wetlands on the coast, according to the Louisiana Resiliency Assistance Program.

"[Even without sea-level rise], we’re still going to continue to sink because the river is no longer connected to the marshes,” White said. “It’s basically just a pipe that goes out to sea now.”

This, combined with natural subsidence and sea-level rise, has resulted in Louisiana having one of the worst coastal erosion problems around the world.

“We are still kind of trying to figure out if this problem is solvable with the resources that we have or whether we might not be able to control coastal erosion in Louisiana whatever we do,” Mariotti said. “The situation shifts to minimize those problems.”

Mariotti said that sediment replacement and river diversions are tools being employed to preserve as much land as possible, but he and other professors agreed that these efforts could be thwarted by significant sea-level rise within the next 100 years.

“It’s probable that some communities very close to the coast will abandon those areas,” Mariotti said. “Will it be in 30 years, 50 years, 100? I don’t know.”

“One statement I remember is that Louisiana is not a place, it’s a process,” ecology professor Andy Nyman said. “The place where the process is going to be happening is migrating inland. The places that we have today, many of them are going to be gone in a century.”

Despite the bleak future of Louisiana’s coast, the professors agreed that the research being done in coastal Louisiana will serve future communities around the world threatened by sea-level rise.

“As sea level increases in [other] areas, maybe in 50 years or so, they will have the sea level rise LA has today,” White said. “So metaphorically, we are already there and what happens here can be used to better predict what will happen to these other coastlines."

White said that LSU’s research is important for helping the rest of the world prepare for what’s coming.

“If we can figure out what the problems are and what the solutions are, then that will be a great help to humanity going forward,” he said.

However, as for the fate of Louisiana’s coast, significant amounts of land will be inundated and hundreds of thousands of people will likely have to relocate. Researchers and wetland managers focus on delaying that process for as long as possible.

“I think we can slow the loss of the coast," White said. "Can we reverse it? Not in any meaningful way, sea level is coming up no matter what. But some measures might extend our time in the delta and that is the best probably that can be hoped for.”

US coast to see century’s worth of sea level rise by 2050. Louisiana projected to see worst of it

In the next 30 years, sea levels along U.S. coastlines are projected to rise by the same amount they did in the last 100 years, a government r…

Scattered thunderstorms in the morning becoming more widespread in the afternoon. High 84F. Winds S at 5 to 10 mph. Chance of rain 80%.