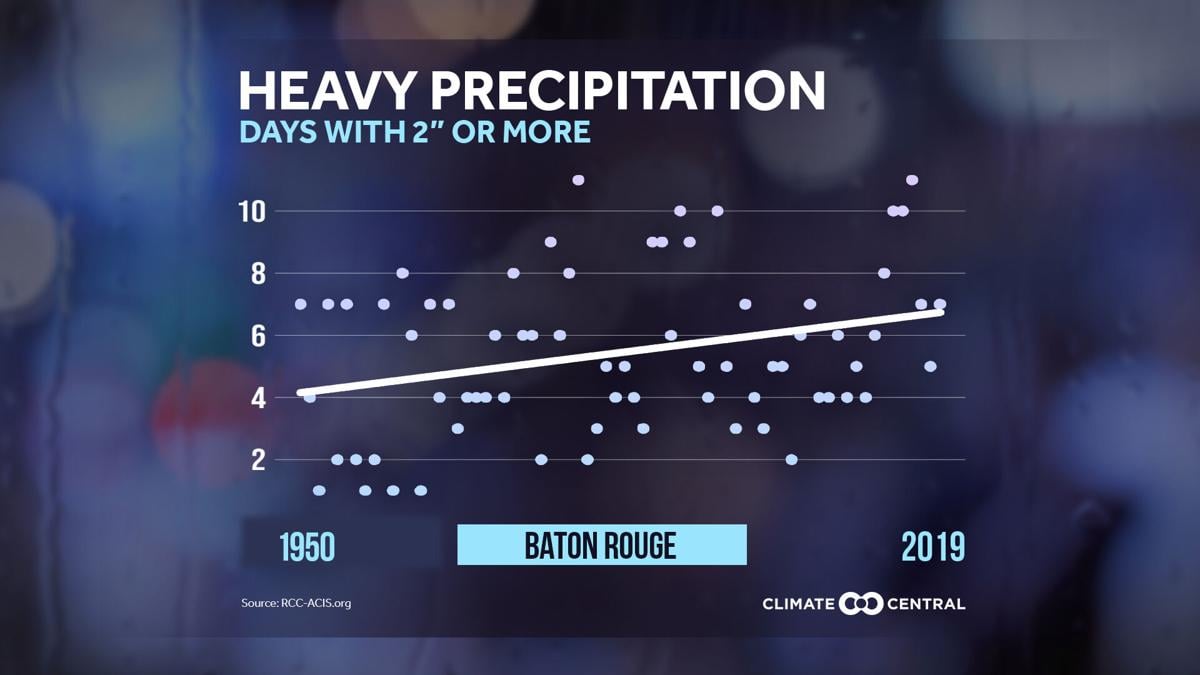 No caption needed since the graph explains itself. Both graphs courtesy of Sean Sublette from Climate Central. 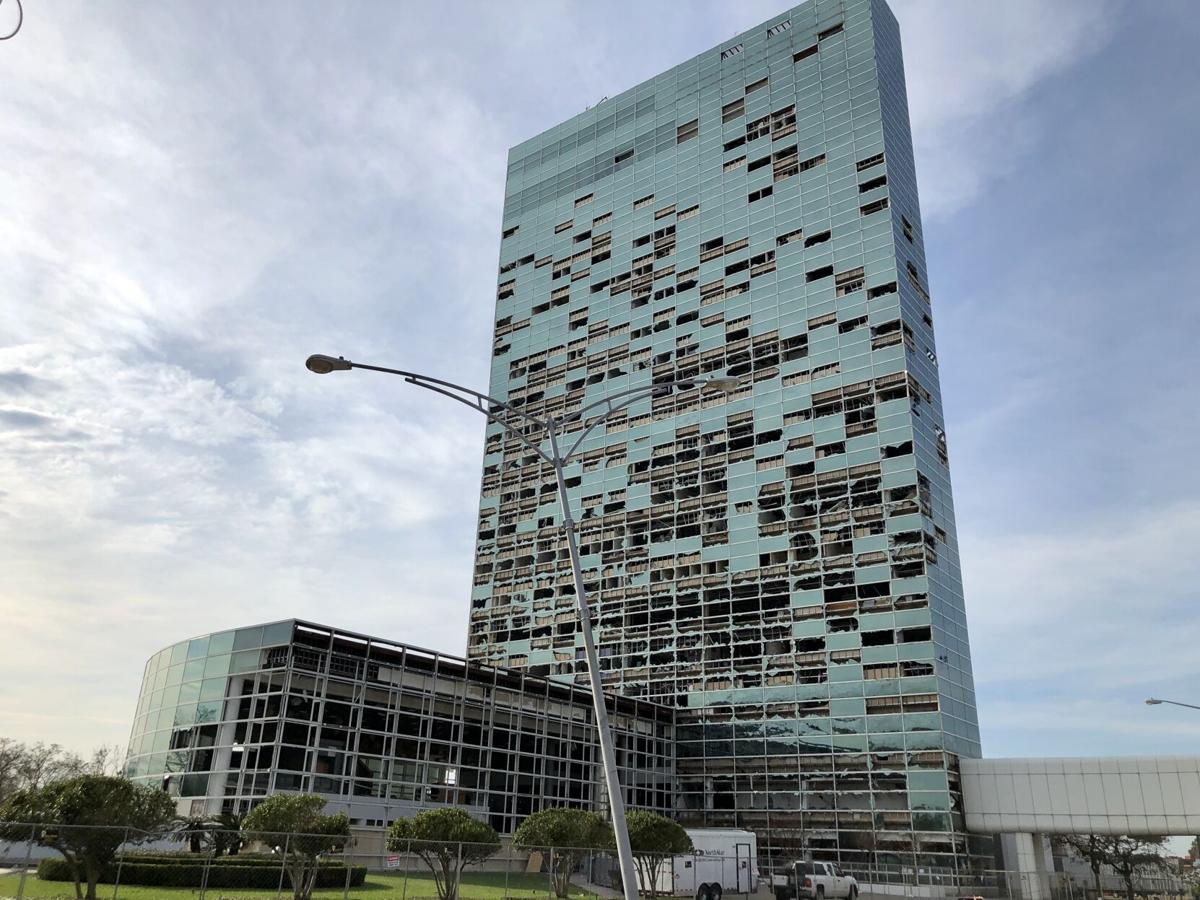 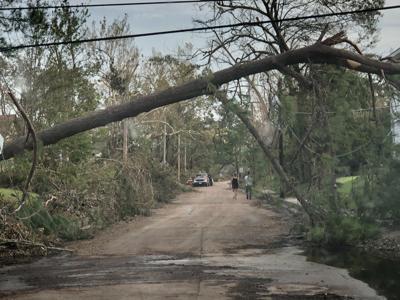 Editor's Note: This story was initially published in Project Citizen: Climate 360, a collaboration between a diverse group of students from across the United States devoted to reporting on climate change.

LAKE CHARLES, LA – The last year of extreme weather in Louisiana has been devastating. Two back-to-back major hurricanes, an ice storm and a spring flood have left the region, especially Southwestern Louisiana, in a perpetual state of recovery.

The state’s fifth largest city, Lake Charles, has suffered greatly from each catastrophe, leading the Weather Channel to call it the “most weather-battered city” in America.

Today, as the state enters what’s projected to be another active hurricane season, residents are still battling with insurance companies for repairs to their homes—the damage to which could be from either hurricane or the most recent flood.

Many remain displaced in hotels as they can’t find contractors to rebuild their houses. Others sleep in tents or trailers in their driveways.

Climate experts say global warming will make disasters like these more common across the U.S., increasing the likelihood of heavy rainfall that leads to flooding and more intense hurricanes that bring stronger winds and higher storm surges.

Louisiana’s low elevation, poor infrastructure and position along the Gulf Coast make the state especially vulnerable to these impacts, the “poster child for climate risk,” as Louisiana Gov. John Bel Edwards described it.

Hurricane Laura slammed into Southwestern Louisiana as a Category 4 storm in August 2020, bringing a nearly 10-foot-high storm surge and wind gusts up to 137 mph. It was the strongest hurricane in terms of wind speed to hit the state in 150 years.

The hurricane severely damaged residential and commercial buildings, knocked mobile homes off their platforms and blew out windows from the city’s tallest building.

Half a million people were ordered to evacuate along the Gulf Coast ahead of the storm’s arrival. In the less populated Cameron Parish, located on the coast south of Lake Charles, many residents had nothing to come back to.

The storm damaged nearly 47,000 homes and killed 33 people in Louisiana. The bulk of the damage occurred in Lake Charles, a city of around 80,000 just 30 miles from the coast.

Just six weeks later, Hurricane Delta, a Category 2 storm, made landfall about 14 miles east of where Laura did, as over 300,000 people remained without power and thousands of blue tarps covered damaged roofs.

“We were still cleaning up. Everyone’s ditches were filled with water and debris,” Lake Charles nurse Madeline Reeves said.

Reeves’ house—where she and her husband had moved into just two months earlier—had wind and water damage. The storm upended much of the region’s recovery efforts, tearing tarps from roofs and causing flooding as thousands of residents remained in hotels far from the city waiting for repairs.

Reeves, a 24-year old nurse at Lake Charles Memorial Hospital, described the atmosphere of Lake Charles after the hurricanes as living in a warzone.

“I’m sitting here in my house with no electricity, and my son is covered from head to toe in mosquito bites, and you still can’t get to places because there’s trees on the road or there’s power lines on the road and everything is destroyed,” she said. “Everybody is just in this survival mode.”

An ice storm in February of this year and a flash flood in May that killed four added insult to injury for Louisiana.

The 2021 winter storm, which covered large portions of the U.S., resulted in widespread power and water outages that lasted for weeks in Louisiana.

In May, the flash flood from heavy rain once again inundated storm-weary Lake Charles with water. The storm left over a foot of rain in Lake Charles and 10 inches in Baton Rouge.

8 months after having 2 hurricanes.. this community is tired. pic.twitter.com/6zV3JOvEL4

Four major natural disasters in the span of eight months have given the region “weather PTSD,” said Rob Perillo, a meteorologist at the Lafayette, Louisiana, TV station KATC.

Perillo did a damage survey after both hurricanes in Southwestern Louisiana, taking pictures and videos of the destruction caused by each storm.

“It was so hard to discern between Laura damage and Delta damage,” he said. “Then those folks had the ice storm and the flooding this spring—it’s been one thing after another.”

"Déjà vu." The resonating quote I kept hearing from residents as they continued to clean up their lives after the Baton Rouge area experienced devastating rainfalls overnight Monday into Tuesday morning. pic.twitter.com/FMaCYKnrQ0

“People are kind of numb to it,” Reeves said. “You get tired of being so anxious and being so worn down.”

Additional coverage of the last year of disaster in Louisiana:

The Frontlines of Climate Change

Climate experts say heavy rainfall, hurricanes and the flooding they bring will become more severe on average as the planet warms. Some models suggest warming since the industrial revolution has already aggravated previous natural disasters in the country, including in Louisiana.

An unpredictable ‘no-name storm,’ dropped over 20 inches of rain in multiple parishes in 2016, damaging hundreds of thousands of homes and killing 60 people. Thirty thousand people had to be rescued from the unexpected flood waters.

Nearly 32 inches of rain fell in one part of Livingston Parish over four days. For comparison, that’s more rainfall in four days than Los Angeles saw from 2012 to 2016, the Washington Post noted.

It also dropped three times as much rain as Hurricane Katrina did in 2005. The amount of rainfall in the hardest-hit places had a 0.1% chance of happening, making it a 1000-year storm, according to the Washington Post.

A paper in the Journal of Advancing Earth and Space Science found this event is 40% more likely now than in 1900 and that the precipitation amount in the 2016 flood was 20% higher due to human-caused climate change.

“What we have seen is, with more moisture, there’s been more rain,” Climate Central Meteorologist Sean Sublette explained. “What we used to consider something that only happened once every 500 years, might happen once every 250 or 200 or 150. Maybe the once-in-a-hundred-year storm happens every 30 or 40.”

Sublette stressed that these are only probabilities that represent how likely a storm is to occur: another 500- or 1000-year storm could strike Louisiana tomorrow, although it’s unlikely.

Basic physics tells us that warmer air can hold more water vapor than cooler air. That extra water then comes down in the form of rain.

“For every one degree increase in temperature, there’s approximately 4% more water vapor that can be in the atmosphere,” Sublette said. “Warmer environment evaporates more water, so you get more water in your storms, so you get heavier rain.”

The number of days Baton Rouge experienced more than 2 or 3 inches of rain has been increasing on average since 1982.

Heavy downpours are increasing nationally, especially over the last three to five decades, with the most significant increases taking place in the Northeast and Midwest, according to the 2014 U.S. National Climate Assessment.

Heavy downpours will increase even in regions where overall precipitation is expected to decline as warmer temperatures dry out land, like in the Midwest.

“You add more energy to the system, the whole water cycle is supercharged,” Sublette said. “That’s why in an individual storm, you can have more rain, even though the weather pattern itself over the course of a few months might be a relatively drier one.”

Hurricanes too will become stronger because of warmer water, which acts as fuel for these storms.

“Especially in a place like Louisiana, along the Gulf Coast, the Gulf of Mexico is very warm compared to the open Atlantic, it makes it more susceptible to rapidly intensifying storms,” Sublette said.

Hurricane Laura rapidly intensified in the Gulf of Mexico into a Category 4 hurricane just a day before making landfall in Louisiana.

Louisiana’s continued loss of wetlands, which act as sponges in absorbing storm surge, and coastal erosion will also make the state more vulnerable to flooding from hurricanes.

“It is certainly a recipe for disaster,” Perillo said. “We’re on the frontlines of that climate shift.”

How you can help

The following organizations are accepting donations and volunteers to help Louisiana residents recover from the last year of natural disasters.