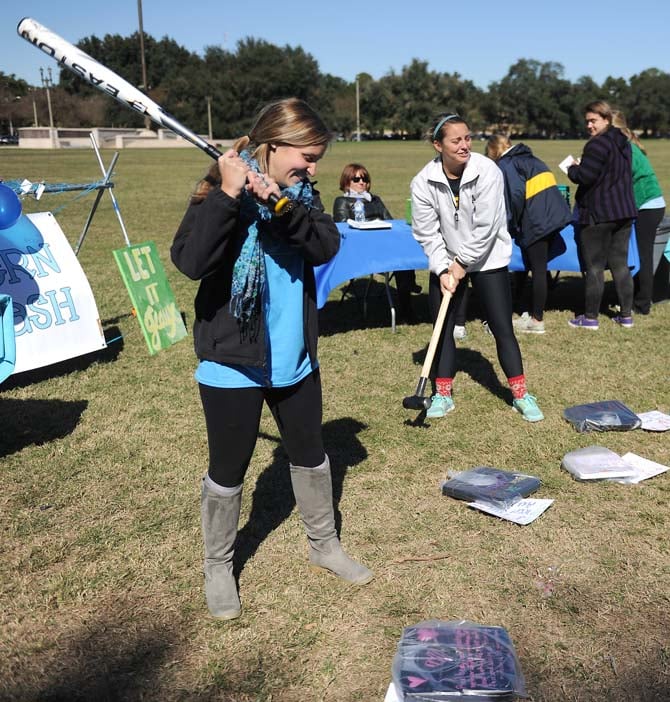 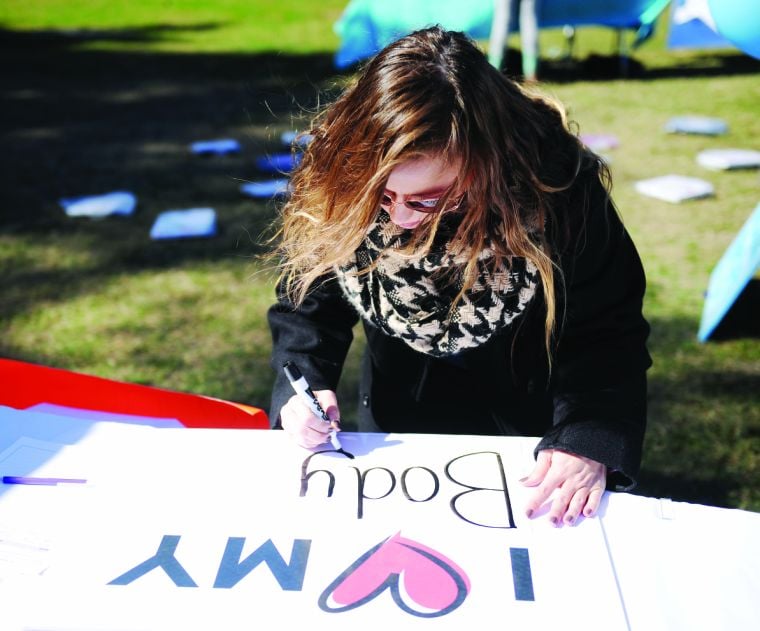 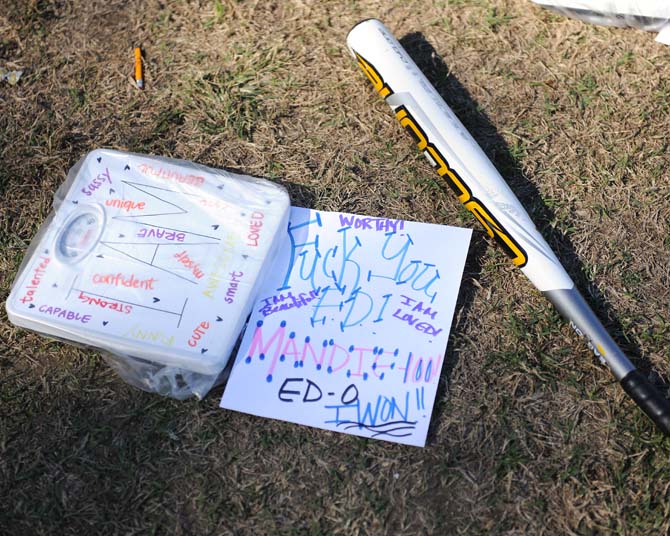 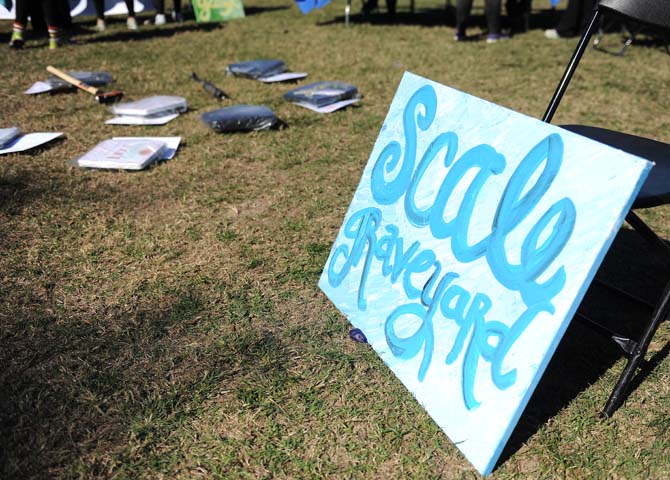 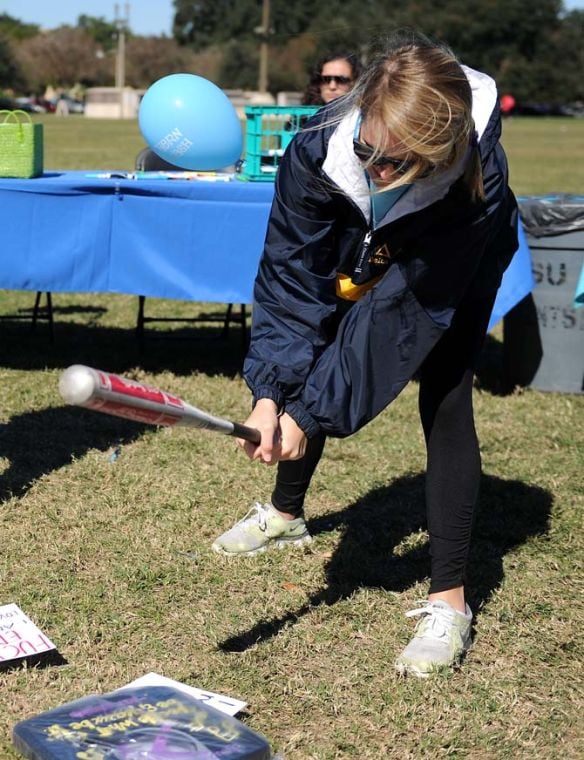 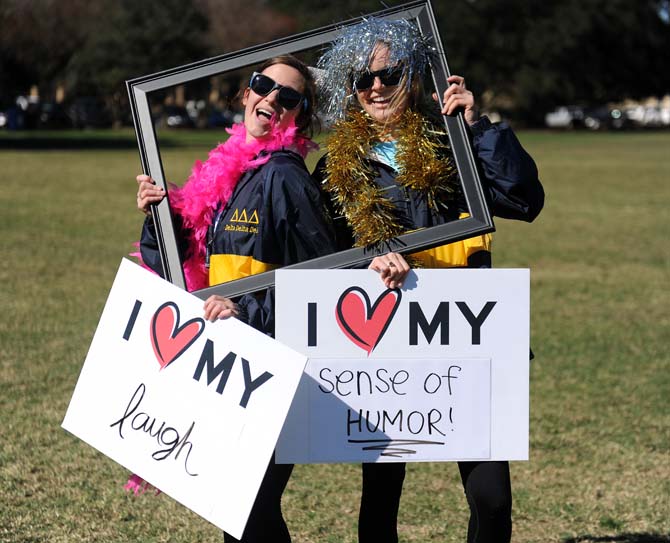 Wanting to smash the scale is a feeling many individuals identify with, and on Wednesday, University students took to the Parade Ground to do just that.

Scale-smashing, photo shoots and a panel discussion were all part of the day that brought awareness to eating disorders and promoted healthy body images, part of an event called Southern Smash.

The event was put on by a local organization of the same name along with the University’s First Year Experience and the Student Health Center to educate students about eating disorders and negative eating behaviors. Southern Smash’s goal was to empower students to have a positive body image, according to Student Health Center dietitian Vanessa Richard.

Southern Smash was founded by McCall Dempsey, a Baton Rouge resident who battled an eating disorder for 15 years before receiving treatment. She described herself as being addicted to the scale until she realized one day that the scale could not tell her how smart, beautiful or talented she was.

Smashing the scales is symbolic and represents smashing a struggle the student has had with body image or eating disorders, Richard said. The act of physically destroying a scale can be an emotional release and therapeutic for students.

On the Parade Ground, students were able to write on scales what they wanted to let go of and then smashed scales with sledgehammers and bats. Students then placed their smashed scales in the scale graveyard, located in the middle of the Southern Smash setup.

Students were also able to write down their perfect number, weight issues, body-image problems and other negative thoughts they had on cards, which they then tied to balloons that would later be released. This act symbolizes students no longer letting those thoughts weigh them down, Dempsey said.

After smashing scales and releasing balloons, students could participate in the “I Heart Me” photo shoot.

The Student Health Center provided students with posters and allowed them to write down what they liked about themselves, whether it was a physical feature or personality trait.

Students then had the option to choose between different wigs, hats and accessories to pose with during the photo shoot along with their poster.

The pictures taken for the “I Heart Me” photo shoot will be used in a media campaign around campus to help commemorate National Eating Disorder Awareness Week from Feb. 23 through March 1, Richard said.

Often, people focus on the negatives and what they do not like about themselves, but activities like the “I Heart Me” photo shoot allow students to concentrate on the features they like and encourage them to appreciate themselves, Richard said.

Body image and eating disorders typically are not discussed openly, and this is a fun way to start the conversation on how to improve self-image and bring awareness to the common issue, Richard said.

Later Wednesday evening, a panel discussion called Smash TALK was held in the Student Union with experts from the University and Baton Rouge community.

The talk featured students participating in a mock lunch discussion about weight, exercising and dieting. Another speaker pulled images of the same topics on Pinterest to show how prevalent body image is in society.

“No one is above these situations — even I still find it hard, but we are in this together,” said Southern Smash co-founder Carley Wahlborg.

Positive change can be created by simply being silent or verbally expressing concern that what is being said is not OK, Wahlborg said.

Students can also inspire change by being a role model and not contributing to conversations about negative body image, Wahlborg said.

Student were then able to share their personal stories and ask question to the panel. Many who took part in Southern Smash and the “I Heart Me” photo shoot found it to be a therapeutic and empowering experience.

Undecided freshman Margaret Cook said activities that focus on positive body image are important because talking about it helps bring awareness and inspires people to change how they see themselves.

Health sciences sophomore Samantha Kimble said many students are unaware of eating disorders and how it can affect anyone, even ordinary people.

She said events like this are helpful to students because participants can physically write down what they like about themselves and can talk about body image with other students and professionals.

Scattered thunderstorms in the morning, then mainly cloudy during the afternoon with thunderstorms likely. Potential for severe thunderstorms. High 82F. Winds SSE at 10 to 20 mph. Chance of rain 100%. Rainfall near an inch.

Scattered thunderstorms during the evening, then becoming clear overnight. Potential for severe thunderstorms. Low 57F. Winds WSW at 10 to 15 mph. Chance of rain 60%.