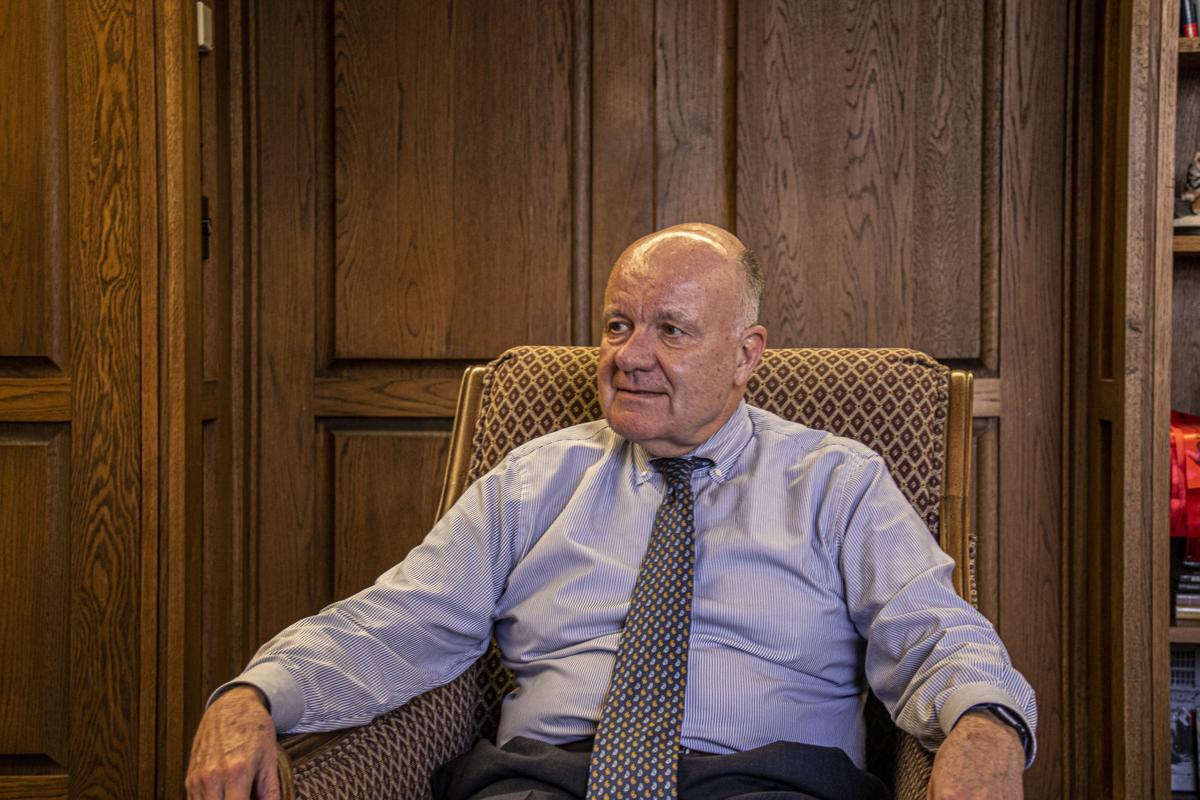 LSU's Interim President, Tom Galligan sits in his office on Monday, Feb. 3, 2020 during an interview at the University Administrations building on LSU's campus. 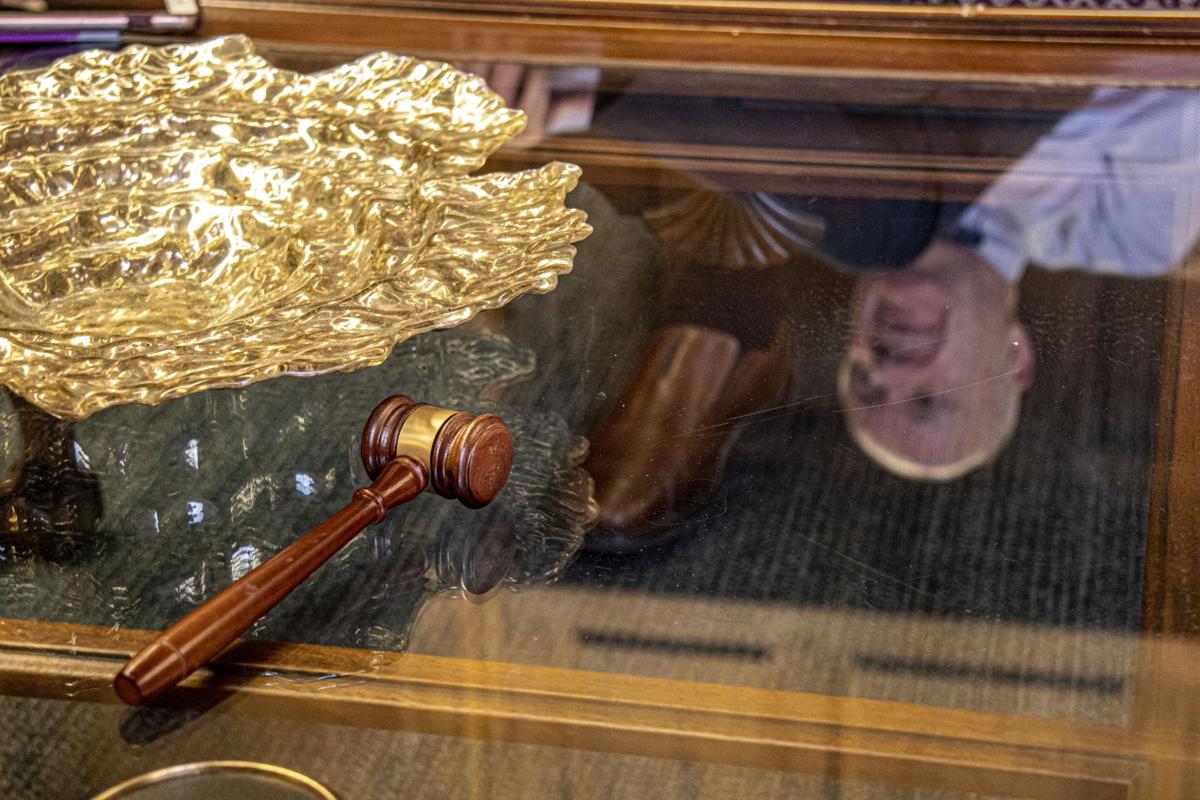 A gavel lays on a coffee table in the LSU President's office on Monday, Feb. 3, 2020 during an interview with Interim President, Tom Galligan at the University Administration building on LSU's campus. 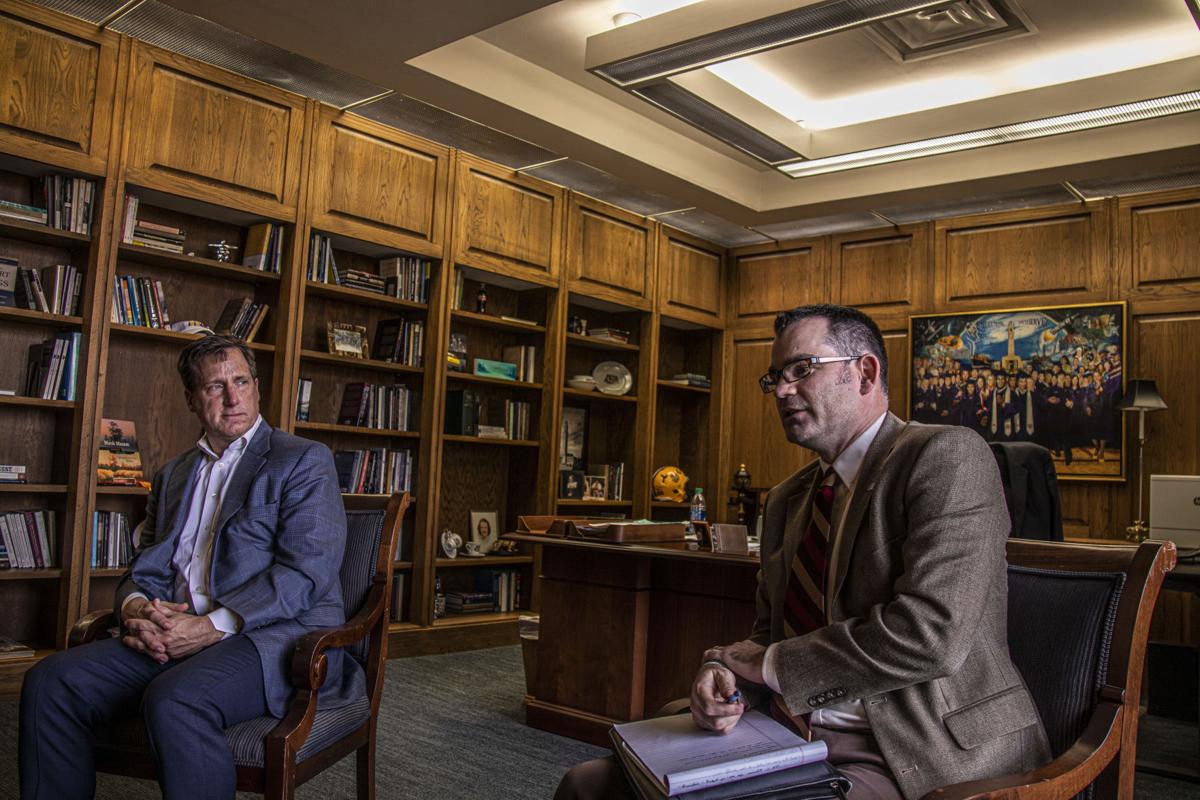 Pictured from left to right: LSU Vice President for Strategic Communications, Jim Sabourin looks over to LSU Media Director, Ernie Ballard as he answers a question on Monday, Feb. 3, 2020 during an interview with the Interim President in the president's office at the University Administration building on LSU's Campus.

LSU's Interim President, Tom Galligan sits in his office on Monday, Feb. 3, 2020 during an interview at the University Administrations building on LSU's campus.

A gavel lays on a coffee table in the LSU President's office on Monday, Feb. 3, 2020 during an interview with Interim President, Tom Galligan at the University Administration building on LSU's campus.

Pictured from left to right: LSU Vice President for Strategic Communications, Jim Sabourin looks over to LSU Media Director, Ernie Ballard as he answers a question on Monday, Feb. 3, 2020 during an interview with the Interim President in the president's office at the University Administration building on LSU's Campus.

Galligan made the 484-mile trek in between jobs, transitioning from his role as president at Colby-Sawyer College to the dean of Paul M. Hebert Law Center, the University law school.

For the next few months, Galligan will have a lot less free time.

“Somebody [LSU Board of Supervisors Chair Mary Werner] came to see me and asked if I would be interested [in the role of University interim president],” Galligan said. “I was like, ‘woah.’ I didn’t expect it.”

Galligan was asked to step in for former University President F. King Alexander, who left LSU after nearly seven years to serve as president of Oregon State University. Alexander announced his

departure on Dec. 13 and officially stepped down on Dec. 31, though he will remain at the University in a research capacity until March.

Galligan describes his role as interim president as the University’s chief officer. Galligan aids in planning for campuses across the state and determines where the resources come from for those plans. With the legislative session about to begin, he plans to spend time at the state capitol talking to legislators and administrators.

“I’m not an introvert,” Galligan said. “I’m really having a great time meeting people and getting to sing the praises of LSU.”

Galligan said any LSU president should prioritize student experience, safety, quality of research, government relations, communication, state and federal support and private philanthropy, topics he plans to focus on himself.

Galligan said he approaches the job with enthusiasm, excitement and opportunity. He hopes to see progress in the recruitment of more students across all LSU campuses, as well as coordination and collaboration across all campuses.

Galligan praised his predecessor, Alexander, for attracting diverse freshman classes and driving the Fierce for the Future initiative. He said Alexander led the University through the state’s slashing of its higher education budget during Gov. Bobby Jindal’s administration and to a new philosophy on admissions that helped the University work to its full capacity.

Coincidentally, the former University president lives on the same street as Galligan.

“I’m very grateful to him, and I think he did a wonderful job while he was president,” Galligan said. “He certainly aided me, and he’s also been willing to listen and share as we were transitioning.”

Though he will continue the programs and plans that Alexander initiated, Galligan plans to put his own “inflection” on those programs.

“Will I do things differently? Yeah,” Galligan said. “Every leader is his or her own person.”

During his first few days in the new role, Galligan was tasked with the discussion of canceling classes on Jan. 13-14 for the National Championship game. Many students praised the decision and Galligan, but he said it was the Board of Supervisors that chose to cancel classes.

“I would have recommended not canceling classes,” Galligan said.

Galligan’s concern was mainly with the next Monday being Martin Luther King Jr. Day, and classes that met only on Mondays not meeting until the third week of school. This could affect their refund opportunities for students who later decided to drop a class, Galligan said.

He explained that the Board of Supervisors hoped to allow for as many students as possible to enjoy both Gov. John Bel Edwards’ inauguration on that Monday and the National Championship later that night. The board also worried about students who drove to New Orleans for the game and wanted to ensure their safety and prevent them from being rushed to get home.

Though he disagreed with the board, he said it was a great example of how the board works with the University’s president.

“We really had a good, professional conversation about it,” Galligan said. “Reasonable minds can disagree. They’re the Board, so they win.”

In honor of MLK Day on Jan. 20, Galligan sent an email encouraging students to spend their day off of school reflecting on King’s legacy or participating in service projects.

“Today, LSU is home to students of every race, ethnicity, and nationality. We are diverse, inclusive, and welcoming to all,” Galligan wrote in the email. “That wonderful reality is a testament to Dr. King – his actions, his words, and his ultimate sacrifice.”

Though he is enjoying the position, Galligan has no plans to apply for the official role. He hopes to return to the Law School after his time as interim president ends.

“I really am a teacher,” Galligan said. “I got into this because I love to teach.”

As for a permanent president, LSU Media Relations Director Ernie Ballard said the board is researching the best configurations and options from around the country before deciding about the organization of the position.

No time frame was given for the decision, but Galligan said that when Werner asked him to step in, she said it would be for six to nine months.