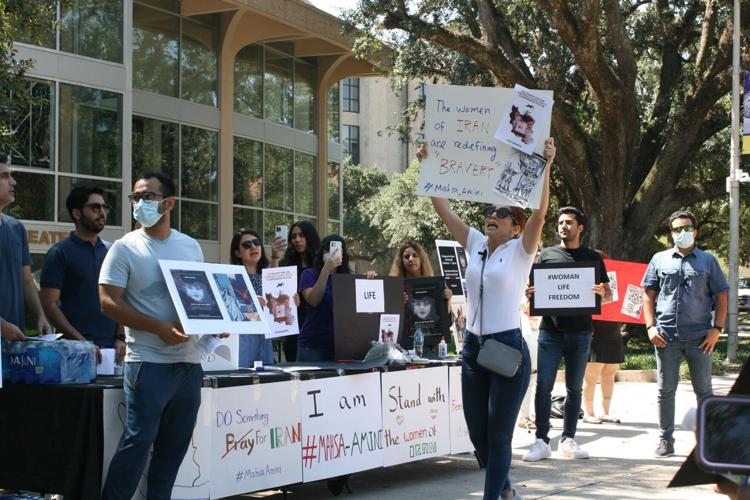 "Woman, life, freedom," is called by advocates for the situation in Iran in Free Speech Alley on Sept. 23, 2022. 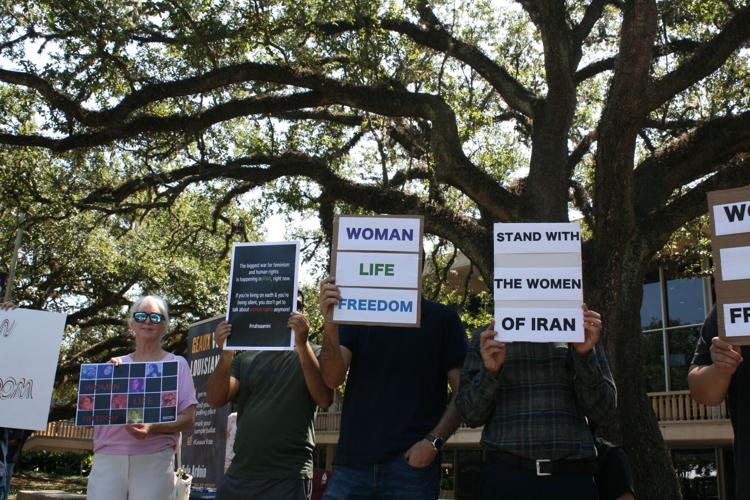 Some advocates in Free Speech Alley wear masks, sunglasses and cover their faces with signs to protect their identity to avoid being recognized by the Iranian government, said a protester on Sept. 23, 2022. 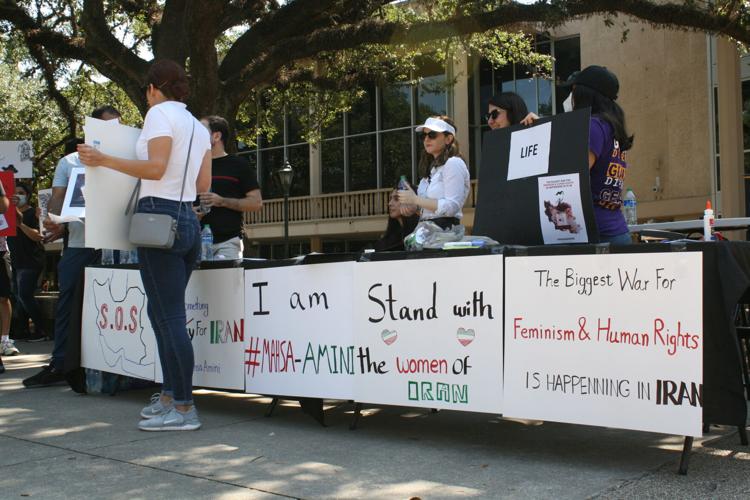 "Woman, life, freedom," is called by advocates for the situation in Iran in Free Speech Alley on Sept. 23, 2022.

Students and members of the Iranian community gathered in Free Speech Alley on Friday with signs, flyers and anger to protest ongoing human rights violations in Iran.

Students and members of the Iranian community gathered in Free Speech Alley on Friday with signs, flyers and anger to protest ongoing human rights violations in Iran.

LSU’s protest is one of many occurring internationally as a result of a pattern of human rights violations by the Iranian government, particularly the death of Mahsa Amini on Sept. 16.

According to the Washington Post, nationwide protests in Iran were sparked by the death of Amini, a 22-year-old Kurdish Iranian woman who was detained by Iranian police for a supposed dress code violation.

She has since become a symbol “for nationwide anger over poverty, repression, clerical control and government impunity,” the article said.

Over 7,000 miles away in Baton Rouge, about 60 protesters stood in Free Speech Alley and handed out flyers, talked to students walking by, chanted and held up signs reading “dictatorship, no thanks” and “stand with the women of Iran.”

At a protest in LSU’s Free Speech Alley, one person chants,“no to the dictators,” in response to the human rights issues in Iran.@lsureveille #lsu #iran #MahsaAmini pic.twitter.com/oPyLS29aiT

Elnaz Parsaeian, 30, is an Iranian-born pharmacist who moved to the U.S. with her father when she was a 1 year old and returned to Iran at 11 to learn her native culture and language. At 17, she returned to the U.S. and has stayed since.

According to Parsaeian, many of the people at the protest are in the U.S. through a visa, meaning they must eventually return to Iran if they can’t find a job or need to visit family. Many protestors wore sunglasses, hats and masks to hide their faces out of fear that the Iranian government would identify them.

“You don't even know what's going to happen to these people,” Parsaeian said. “Once they enter Iran, they can get arrested. Anything can happen. So I guess more for their own safety and the family's safety, they don't want anyone to see their face, to be sent to Iran, [or for] anything to happen to their family.”

As a result of the Iranian government limiting internet access across the country, including bans on Instagram and WhatsApp, Parsaeian has not been able to contact her family in Iran for three days, adding that she is scared, worried and devastated.

Most of the Iranian protestors at the event can’t contact their family members and loved ones either, she said.

“I'm angry. I’m sad. I’m upset,” Parsaeian said. “I wish I was there where I could fight with my people. But unfortunately, I'm here, and I want to do something. But I am very, very angry. This is not right. This is not even about religion. This is about women who want freedom. They want to have a choice.”

With the current regime, women do not have any freedom, Parsaeian said.

Anthropology sophomore Jamshed Khomidov is not Iranian, rather Tajikistani, but attended the protest in support of his Iranian friends. Tajikistan shares deep cultural and ethnic ties to Iran, adding to Khomidov’s frustration seeing his Iranian friends and women undergo these issues.

“It's just really hard to see the Persian world going through so much right now,” Khomidov said. “And it just makes my heart sad.”

Khomidov said that he finds the issue is rooted in the Iranian government, not the Islamic faith.

The hijab, a religious head covering many Muslim women wear, can be beautiful if it’s a freedom of choice, he said.

Another protestor, Amir Vatan, said his entire extended family is in Iran and he’s had trouble contacting them through their family group chat on WhatsApp.

Vatan said that when he last talked to his sister, she said that she could barely connect to the internet.

Not only are there human rights issues at play but there are economic issues occurring in Iran that are leaving many people hungry, Vatan said.

“This regime has been so insufficient,” Vatan said. “They can't bring bread to the table of the people. There are locations in the country of Iran that people lack their fundamental, minimum amount of food they need during the day. They don't have drinking water.”

Amini’s death isn’t the only event that has triggered protest, he said, but the culmination of pressure from the Iranian government over the past 40 years. Since the current regime took power following the Iranian Revolution of 1978, the people of Iran have lost their freedom of speech, Vatan said.

The revolution occurred when the Pahlavi dynasty, which ran the country since 1925, was overthrown and replaced by an Islamic Republic practicing socially conservative sharia law.

“I hate this regime because where we grew up, we saw this oppression for years, and it's happening and happening until someone stops that,” said Mohammad, an LSU graduate student who requested the rest of his information not be included. “So we all ask for help from the whole world to hope for freedom, women['s] freedom and to help us to have a normal life, just a normal life. Nothing more.”

This person told me he’s scared he’ll get detained when he returns to Iran, but chooses to protest.“I'm sad, and I'm angry because of everything that is going on in my country,” they said. “That's why I decided to speak out. I [won’t] remain silent. No more silence for anyone.” pic.twitter.com/fJgnCwceuW

Mohammad hasn’t heard from his family in Iran in 10 days because the Iranian government is keeping information from spreading, he said. Despite this, Mohammad believes the new generation is brave because they are dying in the streets right now.

“[Mahsa Amini] was innocent,” Vatan said. “She died for nothing, and I believe this was a trigger for this great movement that we see is spreading all over the world.”

Vatan is scared that he will get detained when he returns to Iran.

But he won’t remain silent, he said.

“I'm really grateful for the people and students at LSU,” Vatan said. “Students [have] always been a great voice, either in Iran or outside of Iran. They motivate people. They are educated, and they know this situation. They analyze the situation well, and I'm so grateful to be in this community.”

What should the South do with its former plantations? LSU historians, students weigh in

Louisiana and other southern states are home to many former plantations. Some become plantat…

Some clouds in the morning will give way to mainly sunny skies for the afternoon. High 71F. Winds light and variable.

A few clouds. Low around 60F. Winds light and variable.