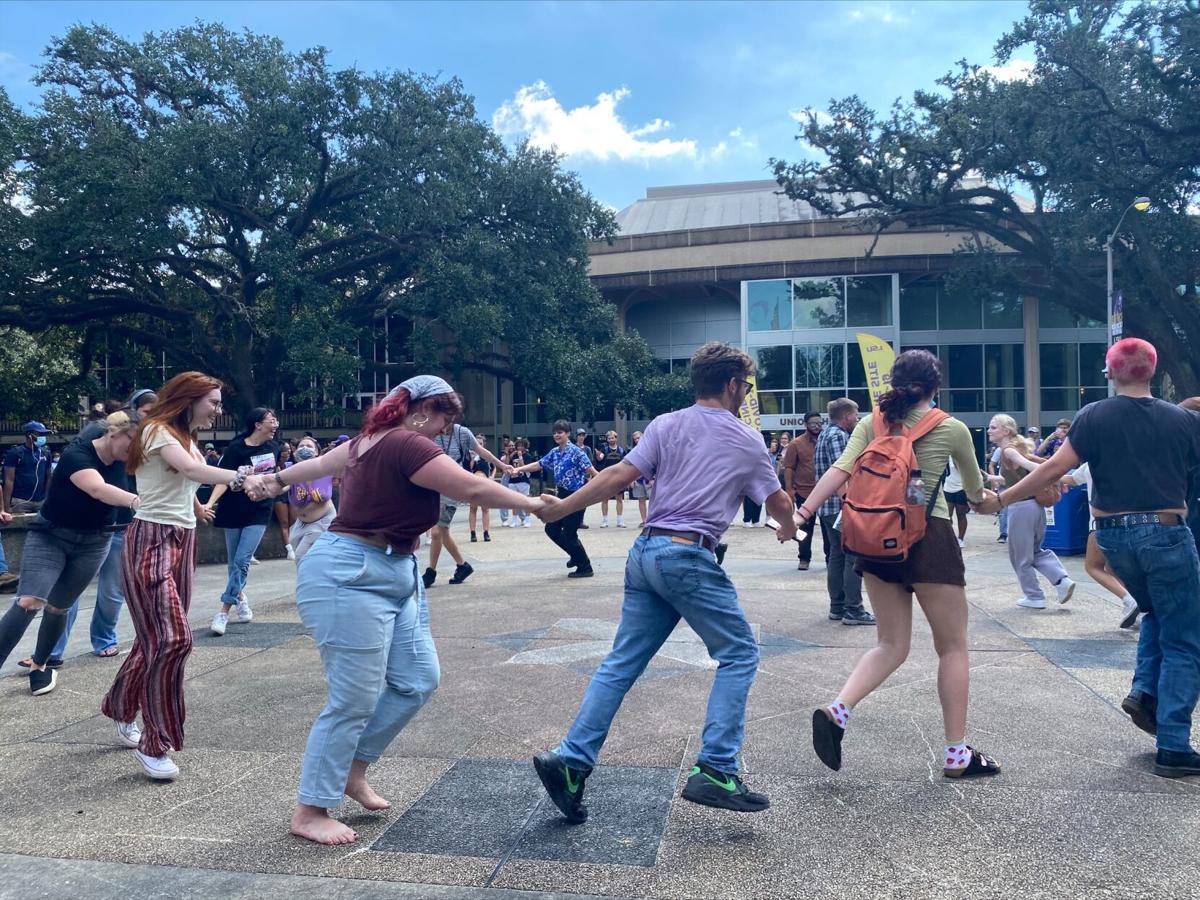 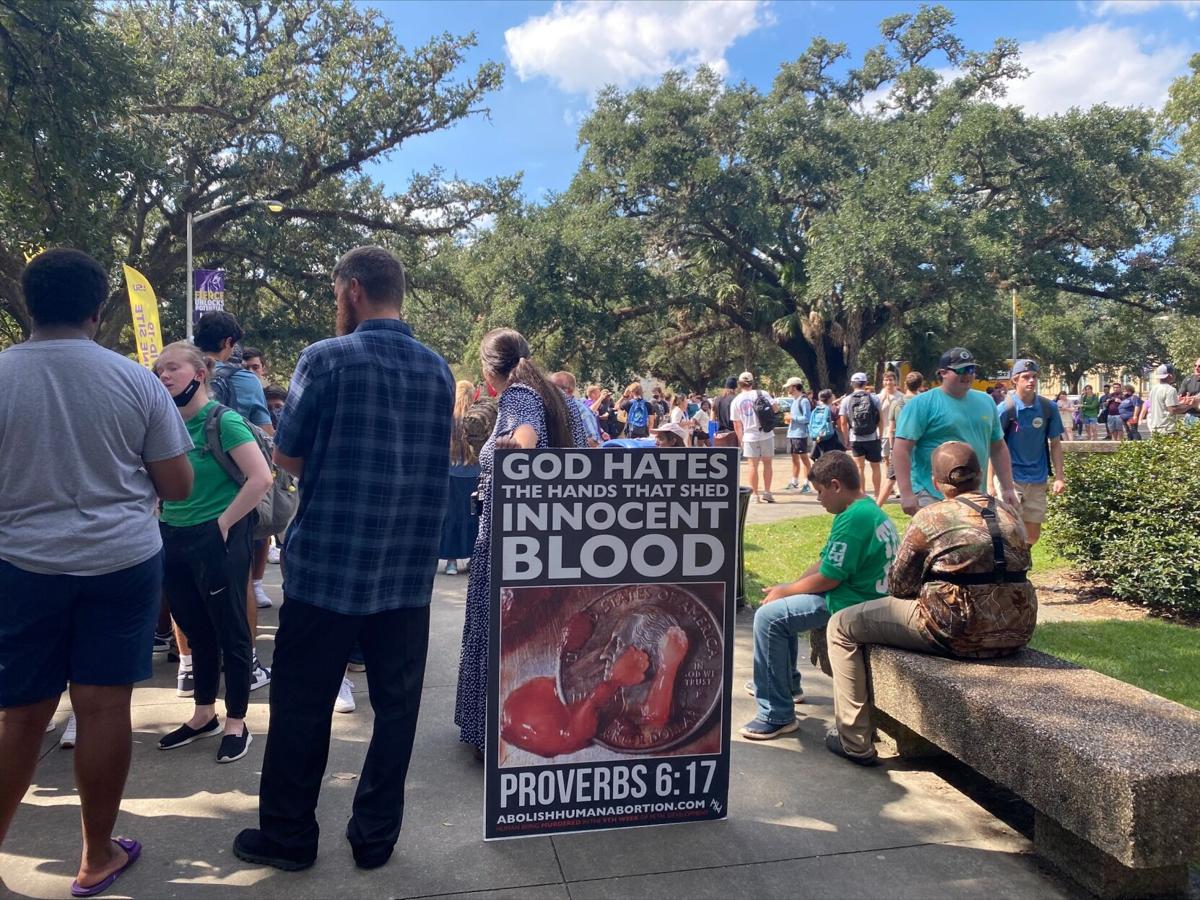 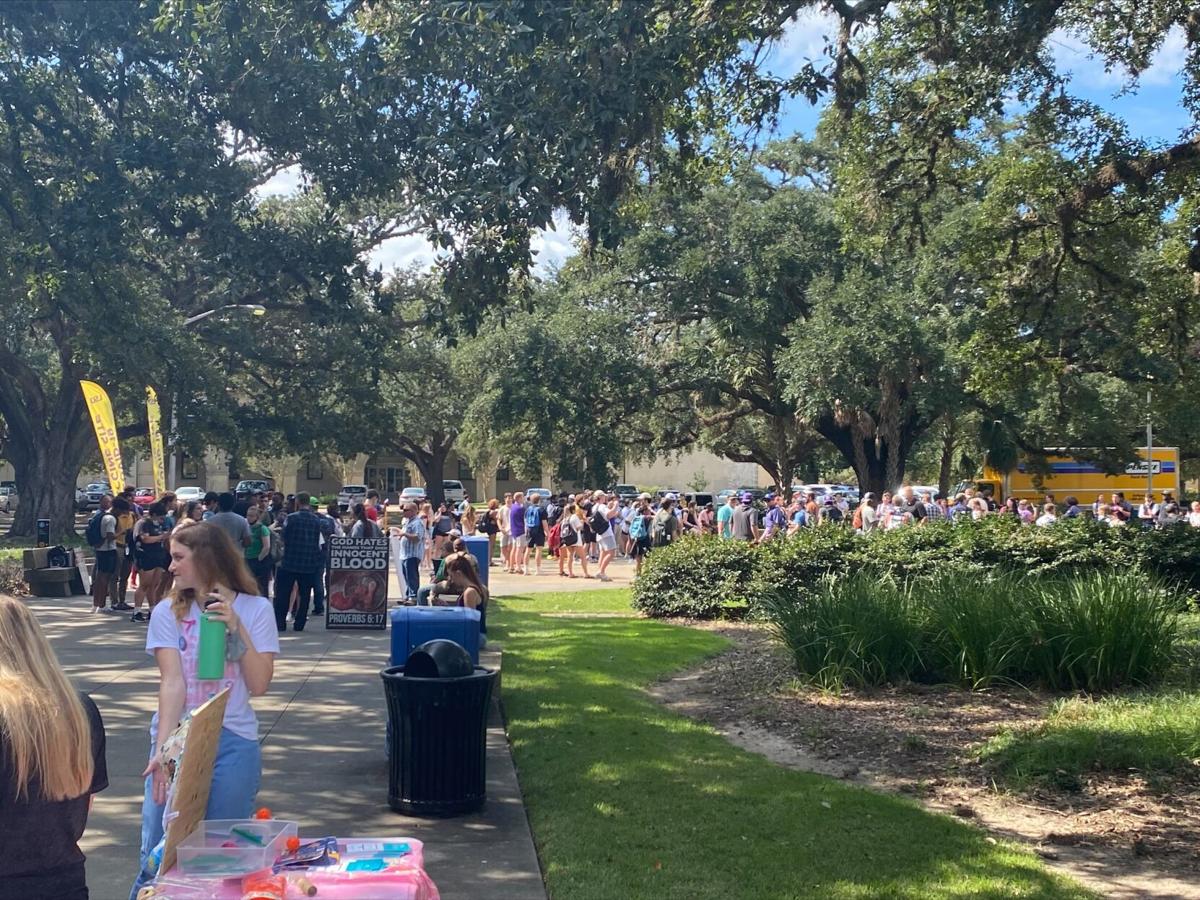 Amid LSU’s ranking as third-worst campus in the nation for free speech in a national survey, dozens of students shouted down a group of about five Christian fundamentalist preachers as they led an anti-abortion demonstration on Tuesday.

Students hoping to drown out their arguments grouped together to act performatively against them–one student blared "Industry Baby" by Lil Nas X, others rapped "Rick and Morty" by Soulja Boy and one even read out the opening lines to "The Communist Manifesto."

The group of preachers began the demonstration by setting up signs around Free Speech Alley with Bible verses on them, but the two-hour event quickly devolved into a shouting match between students and the preachers.

"The Bible says don’t cast your pearl before swine, so we sought to reason with them, but there came a point where we’re saying we’re going to shake the dust from our feet and move on," said one of the preachers. "If Jesus were here today, [the students would] crucify him."

While some students worked together to argue against a preacher, another group of students held hands and formed a circle around the other, running around them.

LSUPD officers stood off to the side, watching over the crowd.

Theatre design and technology freshman Rayne Garcia said she watched the preachers mock a non-binary student who attempted to talk to them. Garcia tried to debate with the group, though she said they ignored her.

“For some people, this can be really heart-wrenching,” Garcia said. “I just think it was a very negative and harmful [event]. They judged us for being on this campus. They said that this was a school of excellence and that he was surprised to see so many sinners here.”

Pre-law political science freshman Caitlin Barron also expressed disdain for the demonstration, joining Garcia in chanting for the preachers to leave and eliciting a negative response from the preachers.

“I just think that this was a huge waste of time, I really wish that they wouldn’t come on campus,'' said Barron, who described the event as creating a “disruptive environment” on campus, especially during the week many students are taking midterms.

Despite the event lasting about two hours, Barron felt like “no one accomplished anything.”

The demonstration occurred only weeks after the Foundation for Individual Rights in Education ranked LSU as one of the worst universities for free speech, placing the university at 152 out of 154 colleges.

Although LSU President William Tate IV has said he endorses “civil debate” on campus, the study found that a majority of students felt they could not openly express their beliefs in class and around school: 32% of student respondents said it's never acceptable to shout down a speaker on campus.

While passersby expressed their dislike for the demonstration, others saw it as a valid expression of free speech.

Biology freshman Dustin Dasselle felt the preachers misinterpreted the Bible, but also believed that they had a right to express their beliefs.

“This country’s built on freedom of speech. That’s how we do it, and I wouldn’t say this is wrong because this is just part of our society now,” Dasselle said. “Even with Jesus–Jesus protested.”

“I think just talking to people one-on-one helps more than just yelling about it and repeating [their message] instead of having an actual conversation."

Ivan Imes, known among the campus community for sitting all day in Free Speech Alley with an empty chair and a "Jesus Talk" sign for students interested in conversing, said he's seen many evangelical groups get kicked off of campus, and that their actions simply create publicity for themselves.

“Their desire is to bring a bunch of students to argue with them and shout back and forth,” Imes said.

Imes has one-on-one conversations with students, which he finds to be more successful and engaging. Imes said performative preachers’ beliefs and demonstrations are not Biblical, even referring to them as a cult.

Psychology sophomore Aaron Gotte was on his way to class when he saw the demonstration. After his class ended, the preachers were still there, so he decided to join the large crowd demanding their departure. He said he felt proud to see students stand firm in their beliefs.

“I decided to get in on it. We all made fun of [the preachers], it was such a fun time,” said Gotte.

Carson Badinger, an electrical engineering junior, said police arrived after a student threw water onto a preacher. Gotte said they watched as students and fundamentalists argued with one another, and only took action when a person took someone else's glasses off their face.

“I genuinely think [the preachers] intend to provoke a response out of people so you see all this loudness, all this noise, all this conflict from people,” Badinger said. “This is the kind of stereotypical fire and brimstone preaching that you often see with fundamentalists.”

Rather than argue with the preachers, history and English junior Niall Mallory read aloud the first few paragraphs of the Communist Manifesto at the demonstration.

“[The preachers] love to group atheists and homosexuals and marxists into this one united group of anti-Christian devilish Satan worshippers,” said Mallory. “I think that’s a really hurtful message… members of the LGBTQ community do not need to be yelled at on their campus,” Mallory said.

General business sophomore Carson Dodd joined the crowd in attempting to drown out the preachers’ yelling. Dodd, along with other students, repeatedly shouted statements that went against the preachers’ beliefs and even noticed some students chanting the viral “Rick and Morty” theme song.

“They absolutely crossed the barrier into hate speech,” Dodd said. “They said, 'we’ll be back next month,' and we said we will be there too. If [the preachers] show up, we’re going to come again.”

John Buzbee and Corbin Ross contributed to this report.