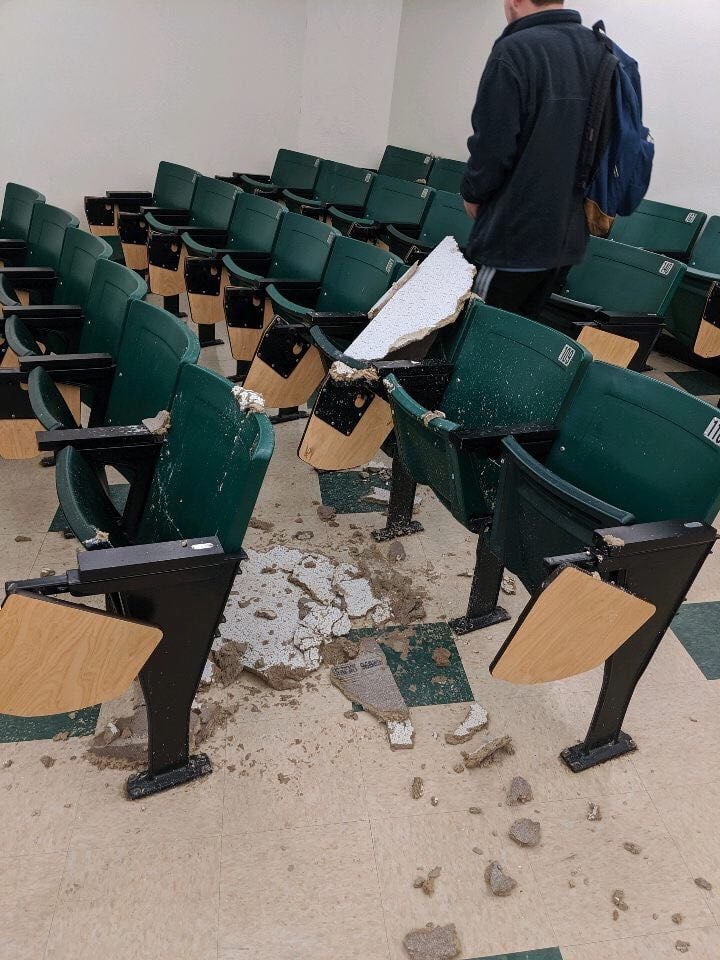 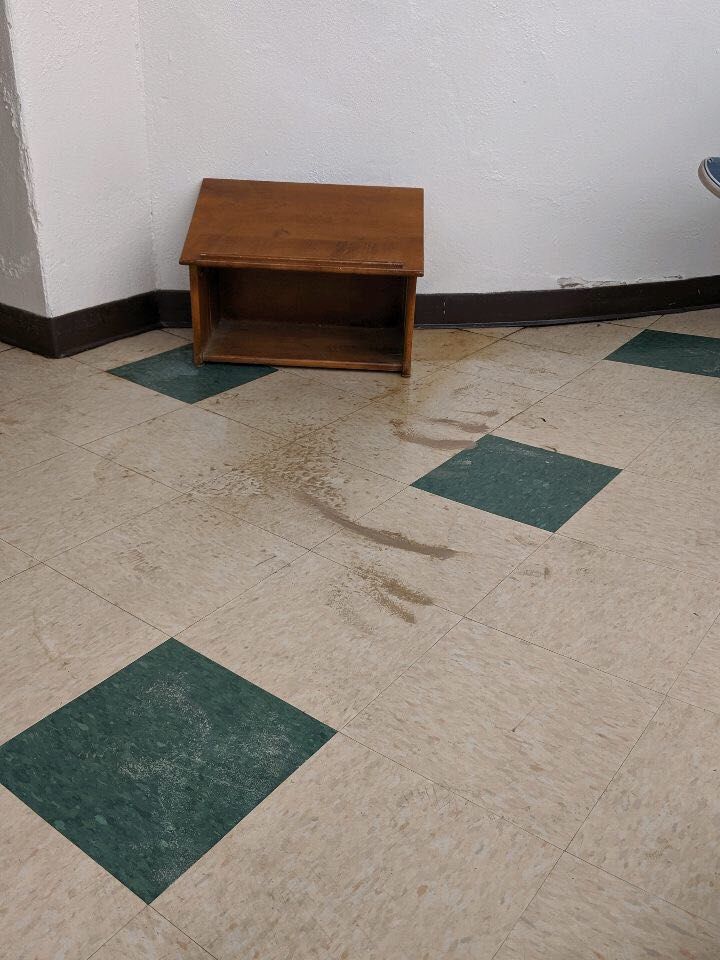 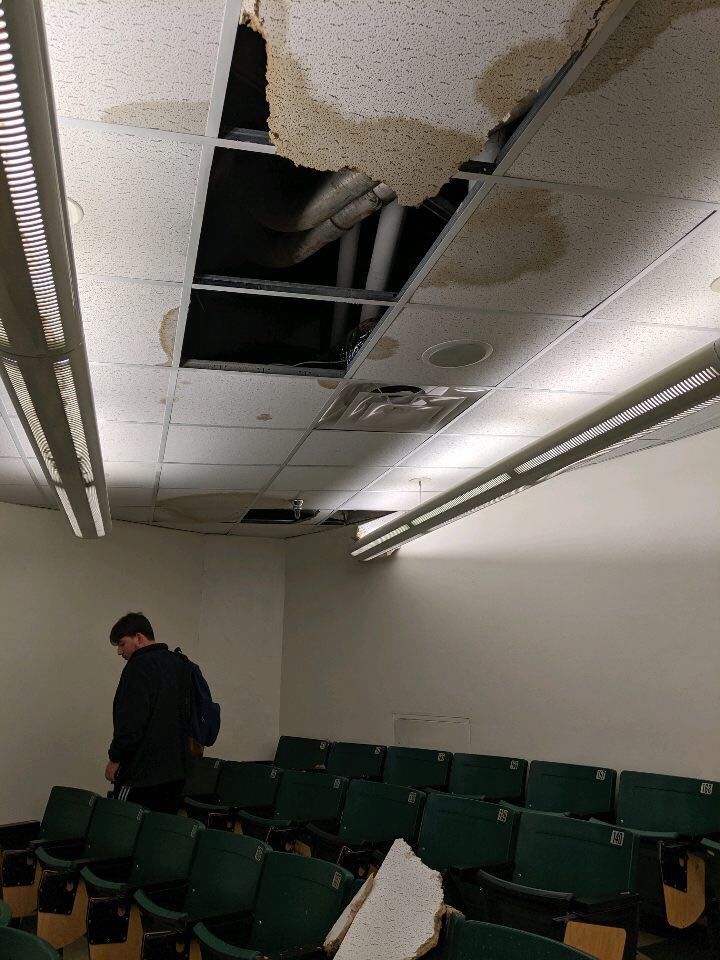 Several ceiling tiles collapsed in three classrooms in the basement of Lockett Hall on Friday.

Facility Services received a phone call from its Customer Services Center on Friday, notifying the entity water was coming through the ceiling in rooms B2 and B5 of Lockett Hall, according to Executive Director of Facility and Property Oversight Tammy Millican.

Millican was unable to confirm the exact time the call was sent but said custodial staff members were cleaning the water in those classrooms by 12:45 p.m. on Friday. Carpenters were dispatched to replace the fallen ceiling tiles.

Ceiling tiles had fallen before English senior Louise Cramp’s 9:30 a.m. history class on Friday, held in B9 Lockett Hall. Cramp said she noticed four fallen ceiling tiles on the floor in the back of the classroom when she arrived around 9:25 a.m. Bits of the ceiling were scattered in and around one row of seats, and a “sizable pool of dusty water” was collecting around the fallen tiles, Cramp said.

Once history graduate student Chase Tomlin arrived to begin teaching the class and saw the debris, he called Facility Services. A worker was dispatched to address the situation, but didn’t arrive before the class ended, Tomlin said.

After calling Facility Services, Tomlin said he taught the class as planned.

“I asked [the students] to remain seated away from the area,” Tomlin said. “The students seemed relatively amused, perhaps like it did not come as a surprise that the building was falling apart around them.”

Ceiling collapse in basement of Lockett leads to mess, classes still being held

Even if she had not noticed the pool of water, Cramp said, she would have suspected water damage because of the appearance of the ceiling tiles.

“All of the sections around the tile that had fallen in were a brown-orange color,” Cramp said. “I’ve had water damage in the roof of my house before, and that’s what it looked like in my house.”

Media Relations Director Ernie Ballard confirmed on Friday afternoon the ceiling damage in the classrooms was caused by a water leak that originated in Lockett B9. The water eventually traveled to the area above Lockett B2 and B5, causing several ceiling tiles to fall in those rooms as well.

Facility Services was still investigating the source of the leakage as of Sunday, according to Millican. As the custodians and carpenters worked on repairing the ceilings and cleaning the affected classrooms, Facility Services began working to locate and repair the leak.

“We have other Facility Services staff trying to locate the source of the leak, which they will repair,” Millican said. “We should have everything complete as soon as possible.”

Professors who hold classes in Lockett B2, B5 and B9 have the authority to cancel classes as they see fit. The University Registrar works with Academic Affairs and Facility Services to temporarily relocate classes if there’s a maintenance issue inside a classroom, according to Millican.

The Reveille contacted the University Registrar to determine which, if any, professors have temporarily cancelled or relocated their classes, but did not receive any response.

Millican said the reason Facility Services responded so quickly to the situation was to prevent interruption to any of the classes held there.

“There is no water on the floor; ceiling tiles have been replaced,” Millican said. “We are looking [and] monitoring that there is no more water leaking into the classroom while we search for the source, so they should be able to operate the classroom as normal.”

Since the incident, Tomlin said, he has received an email informing him of a classroom change for the rest of the semester.

Cramp said students in her class were initially surprised to see the ceiling damage on Friday, but class continued as normal without any disruptions.

“Everyone was walking and looking around it, but no one tried to sit around it,” Cramp said. “We just got on with class. Everyone was just like, ‘that’s Lockett, I guess.’”

Brittney Forbes and Rachel Mipro contributed to this report.

A pipe burst in one of the basement classrooms in Lockett Hall on Monday, rendering the classroom unusable for the rest of the week.